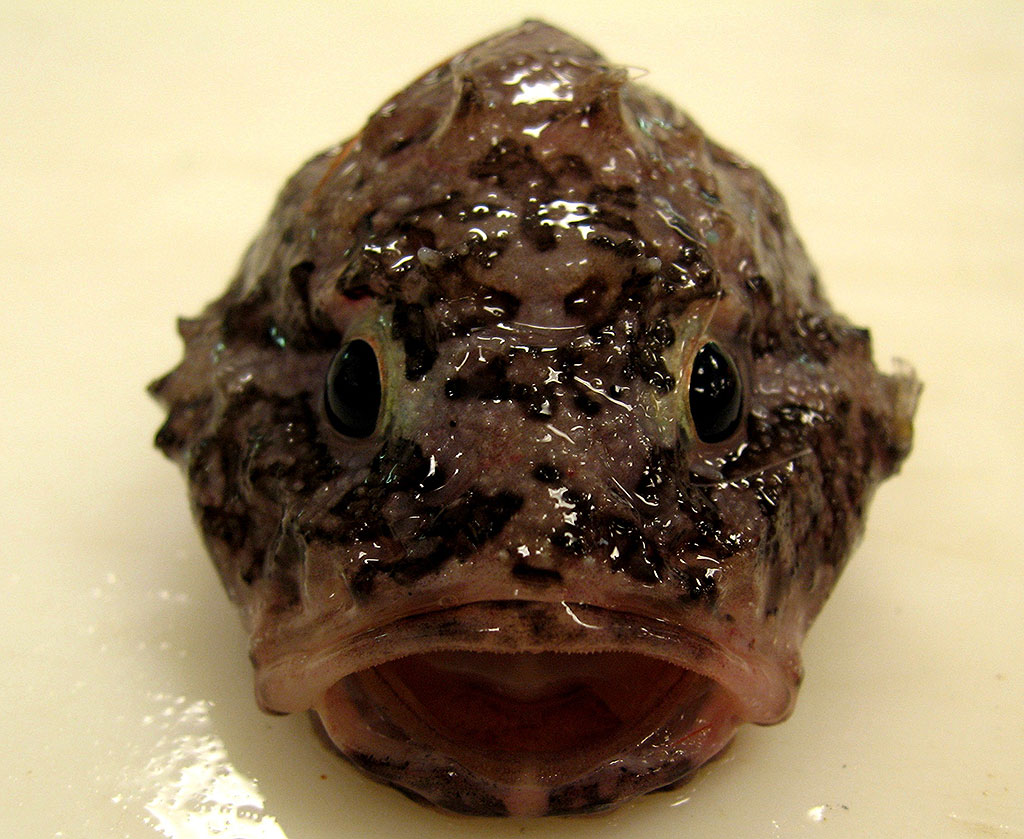 Different fish species are not evenly distributed in the Barents Sea; rather, species’ abundance is highest in areas with preferred environmental conditions. The distribution of species caught during ecosystem and winter surveys has been mapped in an Atlas of the Barents Sea Fishes (Wieneroither et al., 2011, 2013). Different water masses — Coastal Water, Atlantic Water, Arctic Water, and frontal zones between these water masses — are important determinants of distribution and abundance for fish species. Depth is also an important determinant for demersal fishes (Johannesen et al., 2012); while, zooplankton is an important determinant for pelagic species. 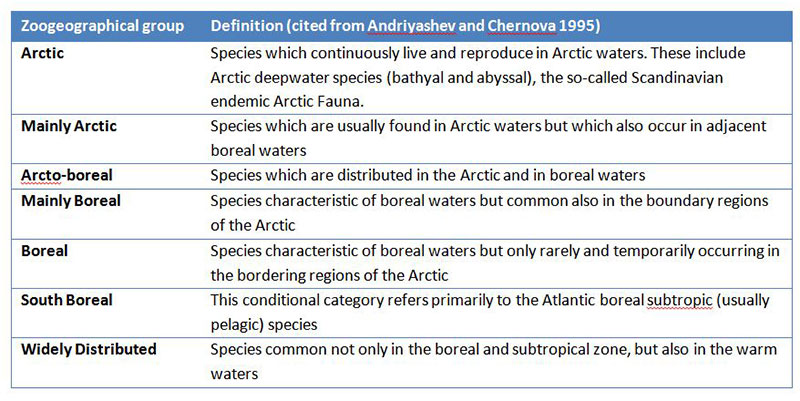 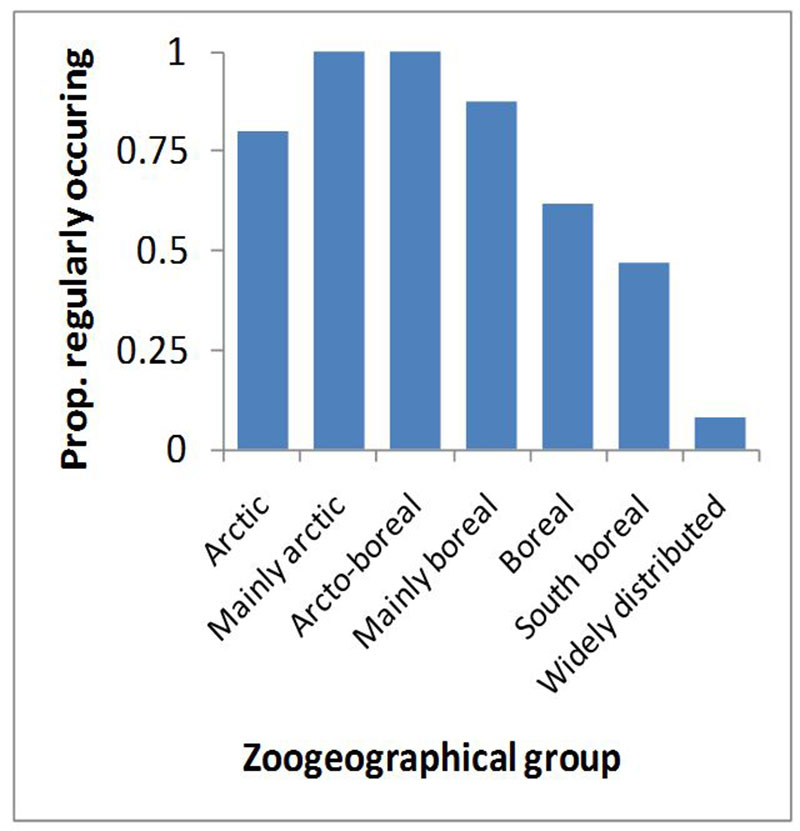 Figure 2.4.9. Proportion of fish species recorded in the Barents Sea (n=166) from Andriyashev and Chernova (1995) that are regularly occurring (n=107) classified by zoogeographical groups. 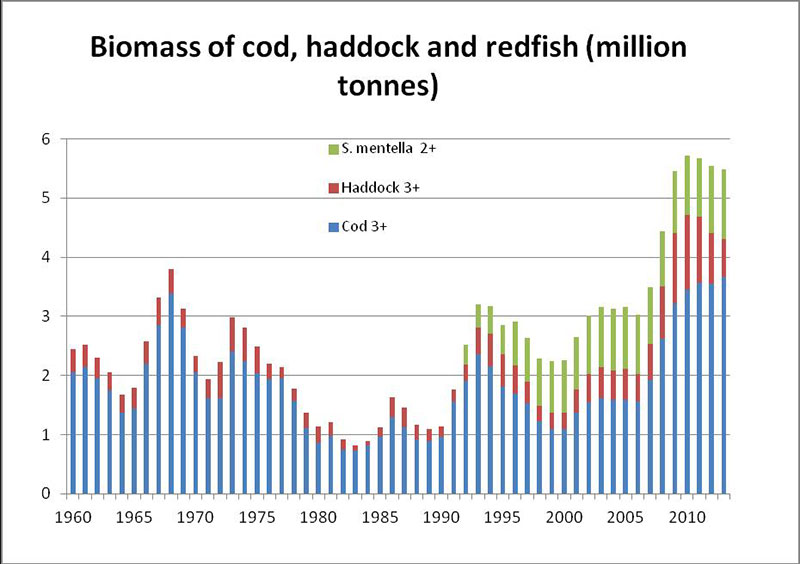 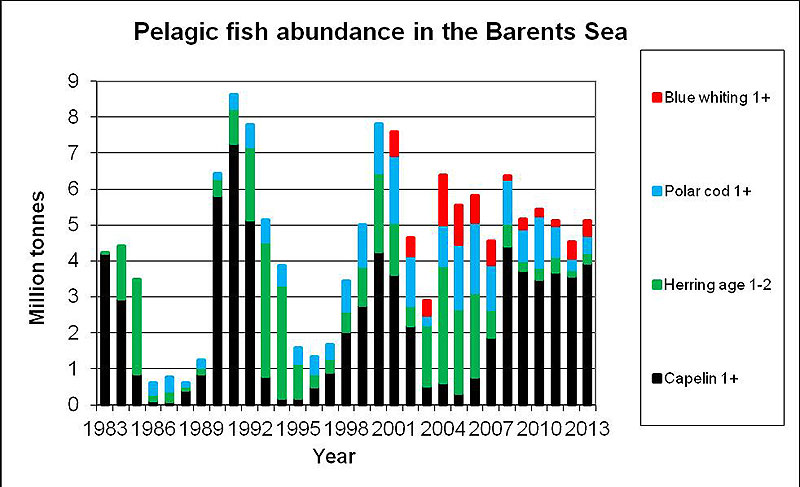 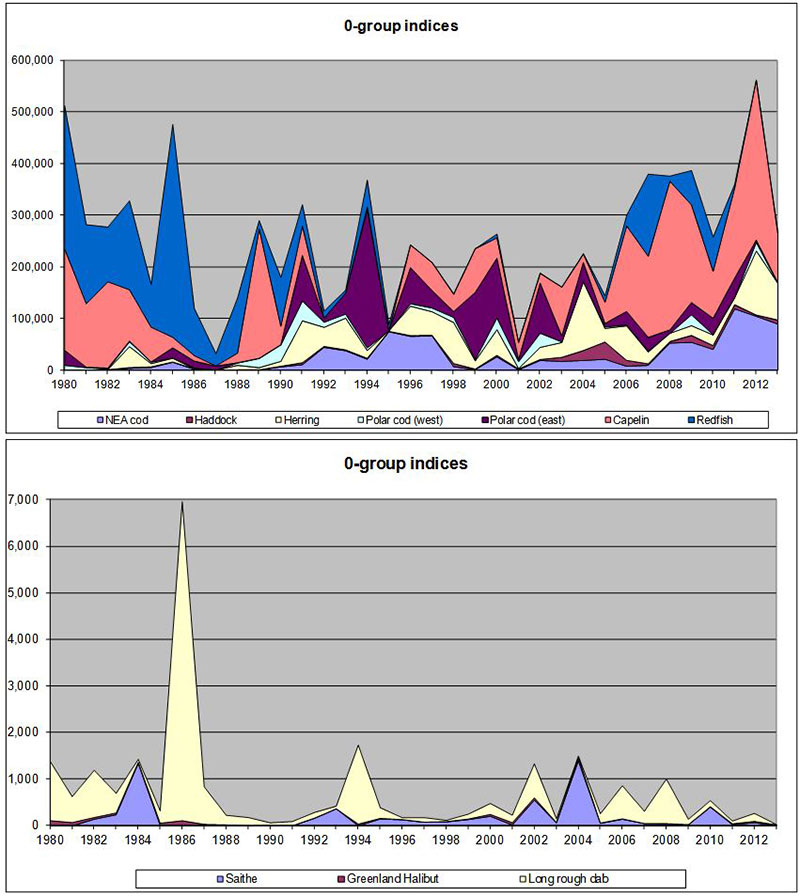 Figure 2.4.12. (Includes the 2 figures preceding) 0 age-group abundance indices (in millions of individuals) not corrected for catching efficiency. Note that the vertical axes differ between the two panels.

There is significant interannual variability in recruitment patterns of Barents Sea fish species (Figure 2.4.12).  Contributing factors include: spawning stock biomass; climate conditions; food availability; predator abundance; and distribution. Variation in recruitment of some species, including cod and herring, has also been associated with changing inflow of Atlantic Water into the Barents Sea.

Adult cod undertake annual spawning migrations from the Barents Sea to the western coast of Norway (2.4.13). Spawning occurs largely in the Lofoten area during March-April. Cod larvae are then advected via the Norwegian coastal current and the Norwegian Atlantic current back to the Barents Sea where they settle at the bottom around October. Cod is a keystone species and the most important predatory fish in the Barents Sea. It feeds on a wide range of prey, including: larger zooplankton species; most available fish species; and shrimp. Cod prefer capelin as prey, and feed on them heavily as they migrate into southern and central regions to spawn. Capelin stock fluctuations strongly effect cod growth, maturation, and fecundity; they also indirectly affect cod recruitment, as cod cannibalism is reduced during years with high capelin biomass. Euphausiids are also important prey for cod during the first year of life (Ponomarenko 1973, 1984); in years when the capelin stock is low, cod predation on euphausiids increases (Ponomarenko and Yaragina 1990). Along Norway’s coast, coastal cod is fished together with Northeast Arctic cod. The TAC for Norway includes both coastal cod and Northeast Arctic cod. The catches are separated by type of cod based on the structure of otoliths sampled from the commercial fishery. 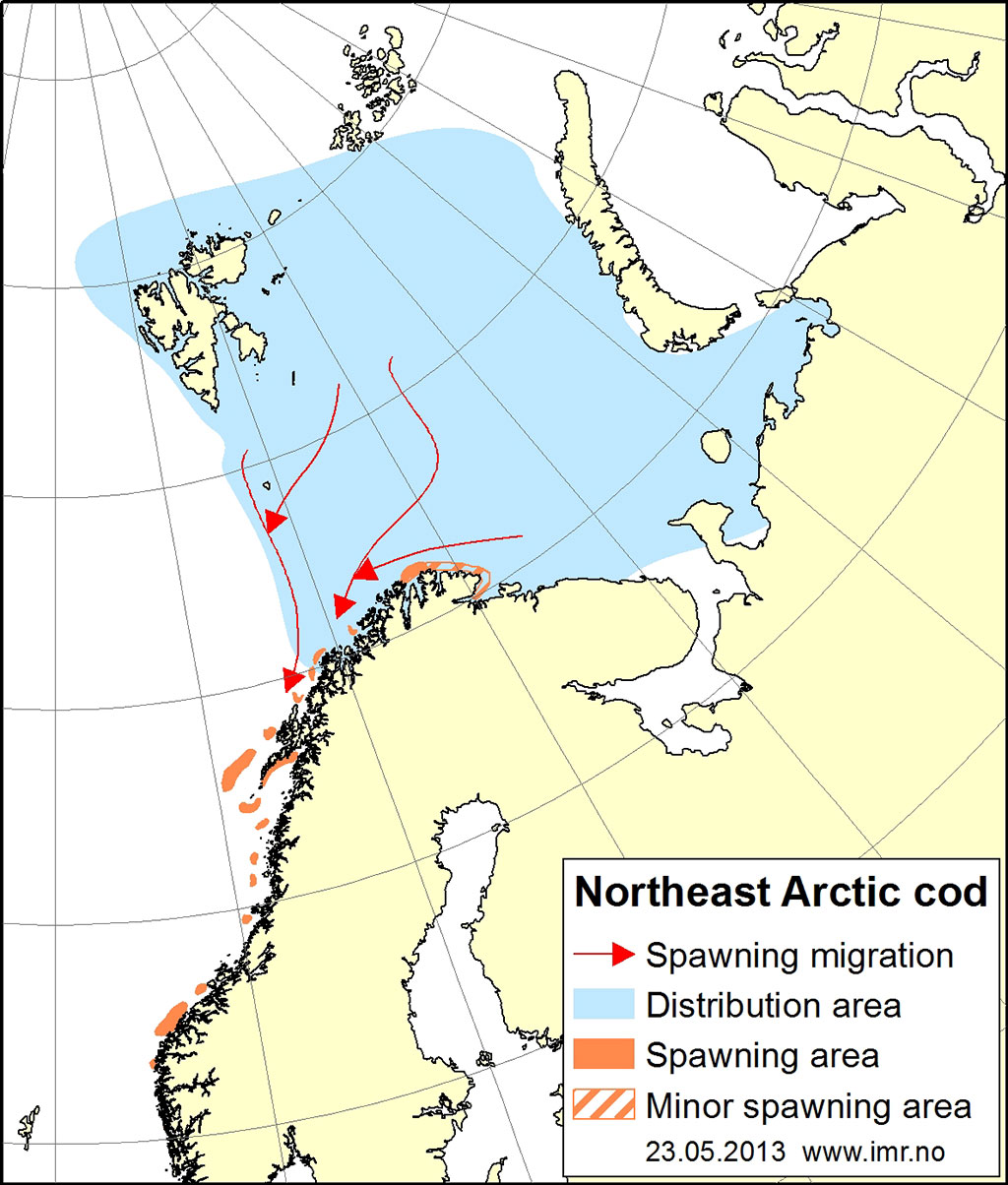 Haddock is an important demersal gadoid species that undertakes extensive migrations to and from its spawning grounds in the Barents Sea (Figure 2.4.14). Variation in haddock recruitment has been associated with changing inflow of Atlantic Water to the Barents Sea. Water temperature during the first and second years of the haddock life cycle is an indicator of year-class strength; if mean annual bottom water temperature does not exceed 3.8°C during this period the probability of having a strong year class is low, even if other factors are favorable. Water temperature is not a consistent determinant of year-class strength; however, a steep rise or fall in water temperature can have a marked effect. Haddock feed primarily on relatively small benthic organisms, including crustaceans, mollusks, echinoderms, worms, and fish. They are omnivorous, however, and also feed on plankton. During capelin spawning, haddock prey on capelin and their eggs. When capelin abundance is low, or when their areas of distribution do not overlap, haddock may switch to other species, i.e. young herring, euphausiids, or other benthic organisms (Zatsepin 1939; Tseeb 1964). Haddock stock size shows large natural variation, largely due to fluctuations in year class strength. Similar to cod, annual consumption of haddock by marine mammals (primarily seals and whales) depends on the availability of capelin. During years when the capelin stock is large, the importance of haddock in the diet of marine mammals is minimal; when the capelin stock is reduced, the proportion of haddock consumed by marine mammals increases. 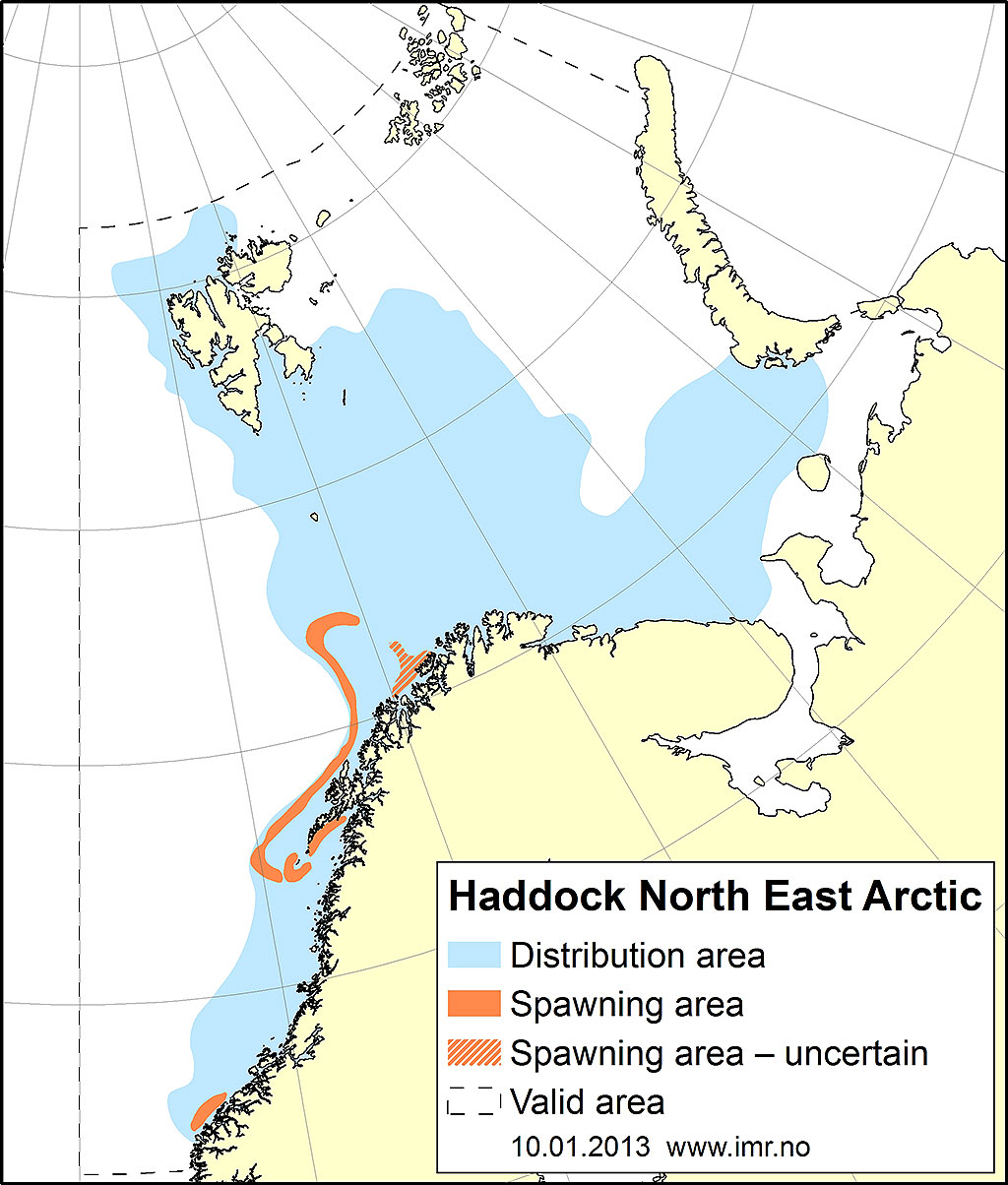 Deep-sea redfish (S. mentella) and golden redfish (S. norvegicus) have traditionally been important commercial species in the Barents Sea ecosystem; current stock levels, however, have been severely reduced. Young redfish are plankton eaters (Dolgov and Drevetnyak, 1995); larger individuals consume larger prey, including other fish species (Dolgov and Drevetnyak, 1993). Until 1990, huge amounts of post-larval redfish filled pelagic waters of the Barents Sea during summer and autumn (Figure 4.2.15). These 0 age-group redfish consumed plankton, and were consumed by other larger fish. Whether this niche once filled by redfish has been filled by other plankton feeders is not well understood. Since redfish are viviparous and give birth to live larvae, a strong relationship is assumed between age composition of the spawning stock and levels of recruitment. In the Barents Sea, low abundance of larval and juvenile redfish is believed to indicate low spawning stock size. Fisheries for both these species are currently restricted in order to rebuild spawning stock size; this is expected to improve conditions and lead to increased production.

Greenland halibut is a large piscivorous flatfish that has the continental slope — between the Barents Sea and the Norwegian Sea — as its most important adult area; it is also found in the deeper waters of the Barents Sea (Figure 2.4.16). Investigations during the period 1968-1990 indicated that cephalopods (squids, octopuses) and fish (mainly capelin and herring) predominated in Greenland halibut stomachs (Nizovtsev, 1975; Shvagzhdis, 1990; Michalsen and Nedreaas, 1998; Dolgov, 2000). With increasing predator length, ontogenetic shifts in prey preference were evident: decreasing proportion of small prey (shrimps and small capelin); and increasing proportion of larger fish. The largest Greenland halibut sampled, at lengths more than 65-70 cm, primarily had cod and haddock as stomach content. 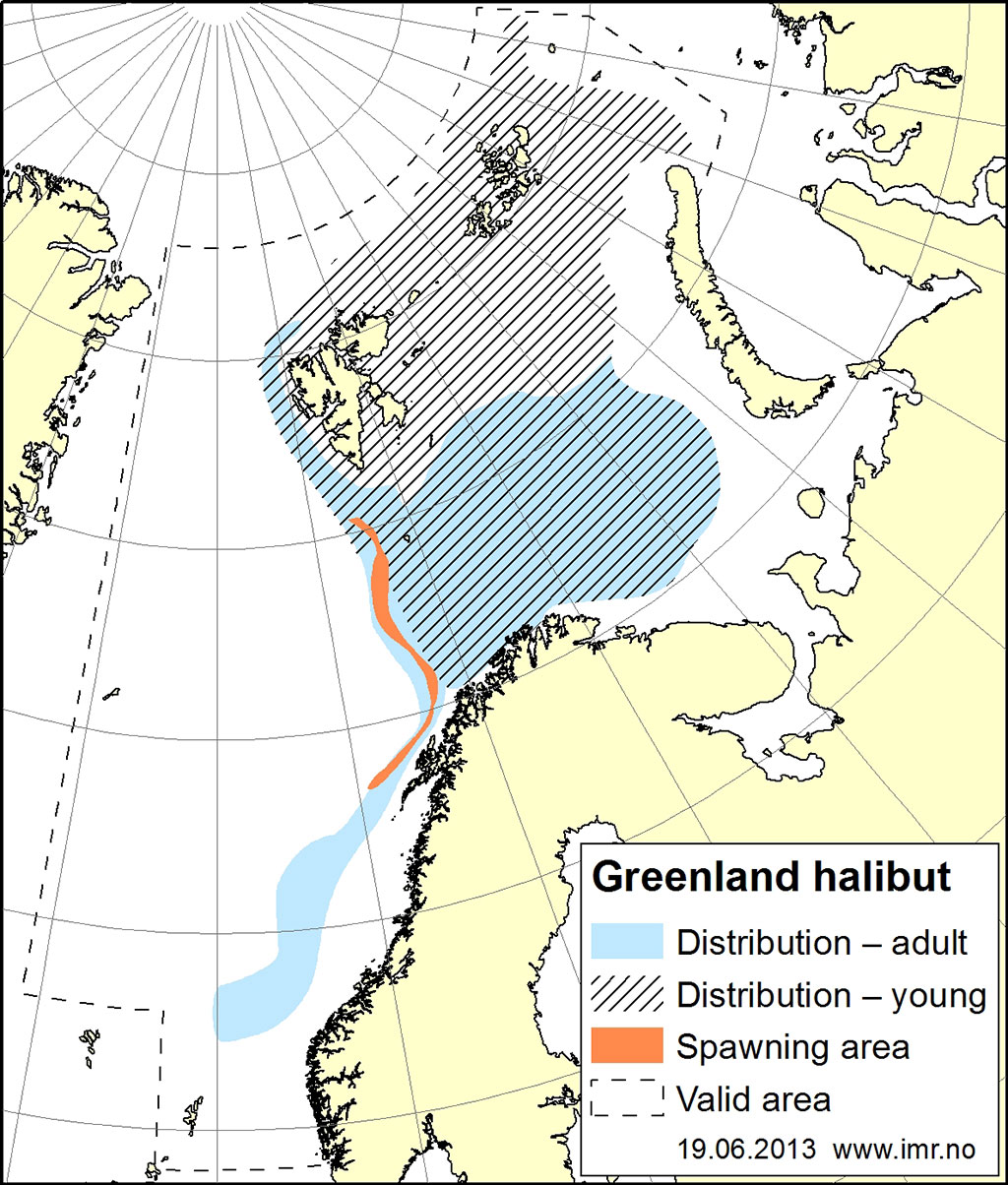 Capelin is a key species because it feeds on zooplankton near the ice edge, and is typically the most important prey species for top predators in the Barents Sea. In this way, it serves as a major transporter of biomass from the northern Barents Sea to the south (Hamre, 1994). During summer capelin migrate northward as the ice retreats; there they have continuous access to new zooplankton production zones uncovered by melting ice. They often have reached 78-81˚N by September-October, before beginning their southward migration to spawn on northern coasts of Norway and Russia. During spawning migration capelin are preyed upon extensively by cod, other piscivorous fish species, several species of marine mammals, and birds (Figure 4.2.17) (Dolgov, 2002).

Abundance of young herring in this area has an effect on capelin recruitment. It is reported that when large year classes of herring enter the Barents Sea, the following year’s recruitment to the capelin stock is usually poor, and the subsequent year’s capelin stock collapses (Gjøsæter and Bogstad, 1998). In recent years, capelin recruitment and stock size has been at an intermediate level, although biomass of young herring in the area has been at an intermediate level. 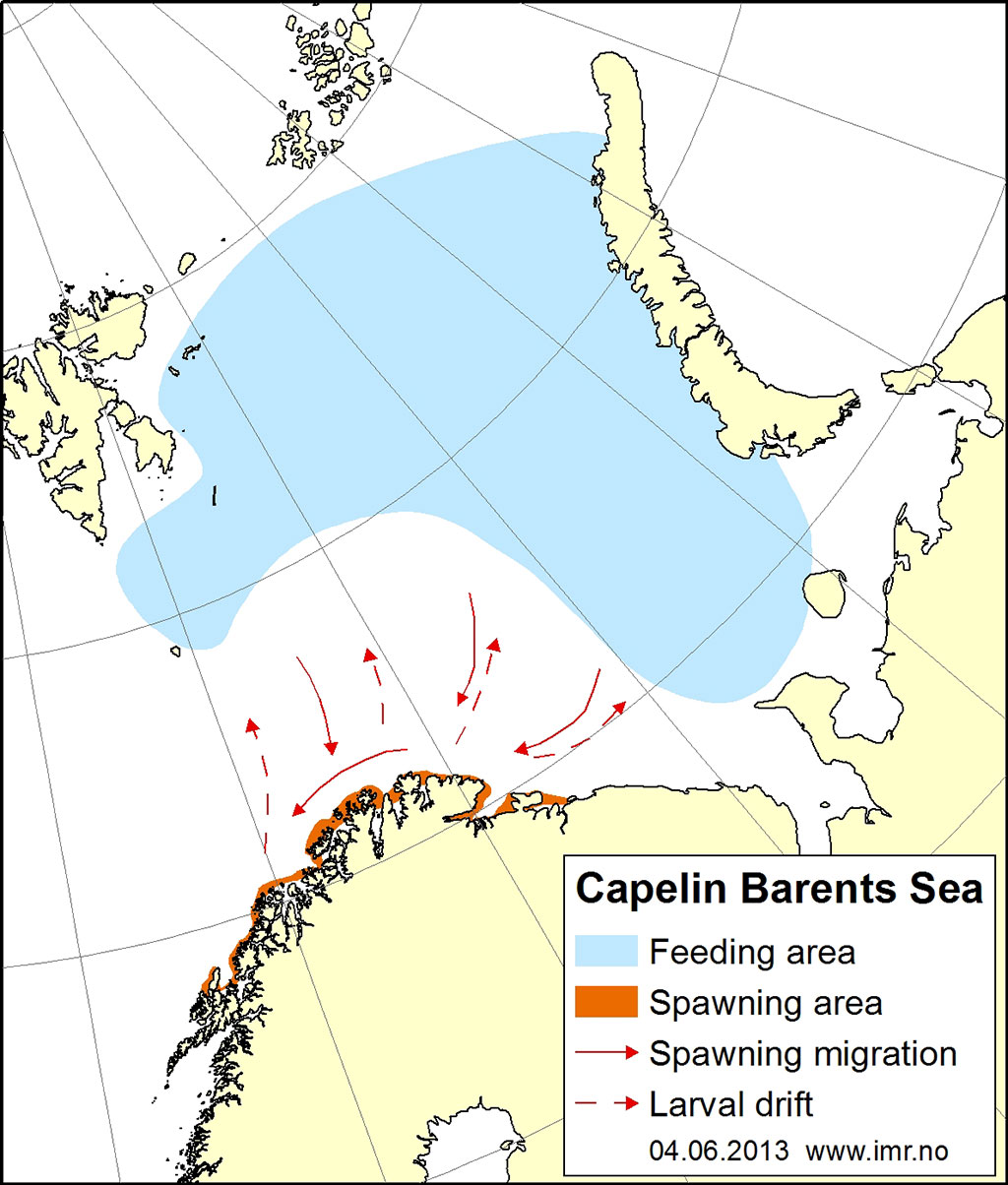 Herring spawn along the western coast of Norway; larvae are then transported northward to coastal areas of the southern Barents Sea, and into some Norwegian fjords. Juveniles are distributed in southern parts of the Sea, which serve as nursery areas for approximately three years before they migrate west and south along the Norwegian coast to join the adult stock (Figure 4.2.18). In the south-eastern Barents Sea, both Norwegian spring-spawning herring and local herring stocks (Cheshko-Pecherskaja herring) are found. These two species can be distinguished by counting the number of vertebrae. In acoustic estimates of young herring in this area, the proportion of each stock is determined separately for each WMO (World Meteorological Organization) square (1° latitude x 2° longitude). 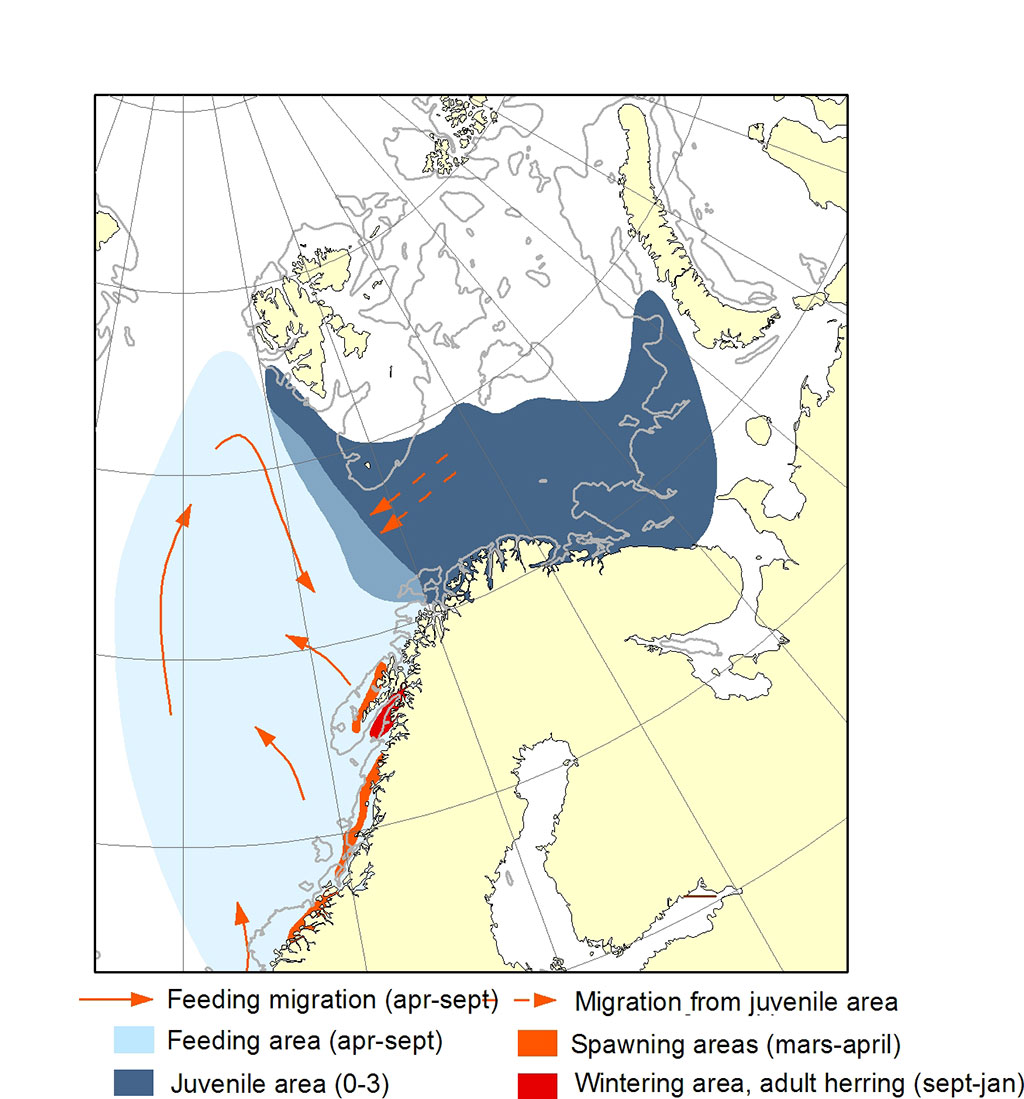 Polar cod is a cold-water species largely inhabiting eastern and northern regions of the Barents Sea. It spawns in both the south-eastern area and the area east of Spitsbergen (Figure 2.4.19). It is important prey for several marine mammals, but also for Arctic cod (Orlova et al., 2001). Polar cod is semi-pelagic and inhabits the lower water column. It is a plankton feeder, with a rather short life cycle; fish older than 5 years are rarely found. There is at present little fishing on this stock. 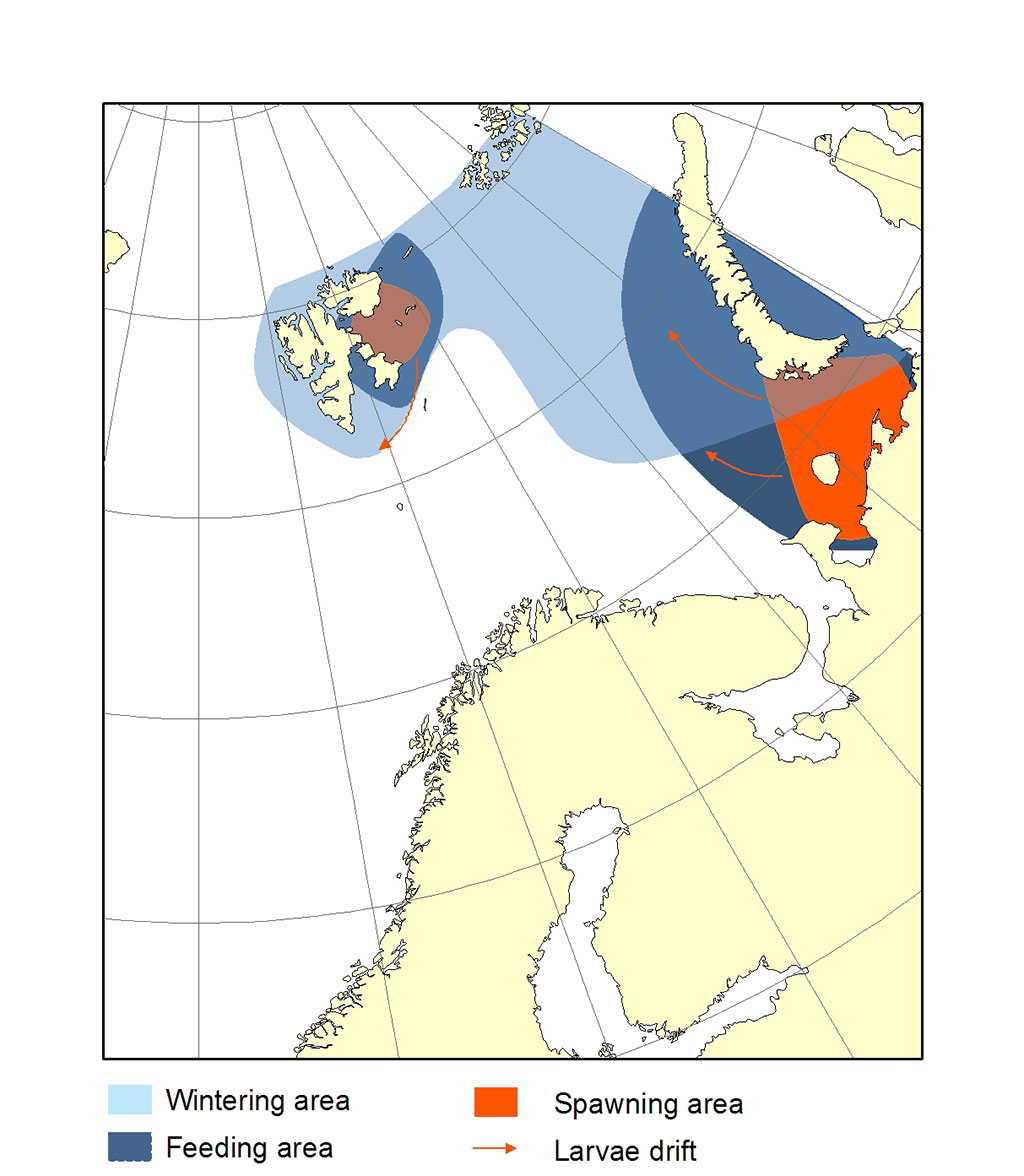 In the northeast Atlantic region, blue whiting is mainly distributed in the Norwegian Sea (Figure 2.4.20). The marginal northern extent of its distribution is at the entrance to the Barents Sea; its population there is relatively small. During years with inflow of warm Atlantic Water masses, blue whiting may enter the Barents Sea in large numbers; they can be a predominant species in western areas. Such a situation occurred during 2000-2001, and blue whiting abundance remained significant until 2007. During its early life history (until age 5), this species is primarily a plankton feeder; its food preferences later become more piscivorous.

Blue whiting, capelin, polar cod, and young herring are largely plankton feeders. General distribution patterns for these four species have only minimal overlap: blue whiting in the west; capelin in the north; polar cod in the east (some overlap in the Spitsbergen region); and herring in the south. In the south-western region, blue whiting and herring may overlap in their area of distribution, but they tend to occupy different depths in the water column. Their lack of overlap with other predominant pelagic species — both in area of distribution and depth of water column — indicates low interspecies competition in feeding on the local zooplankton. 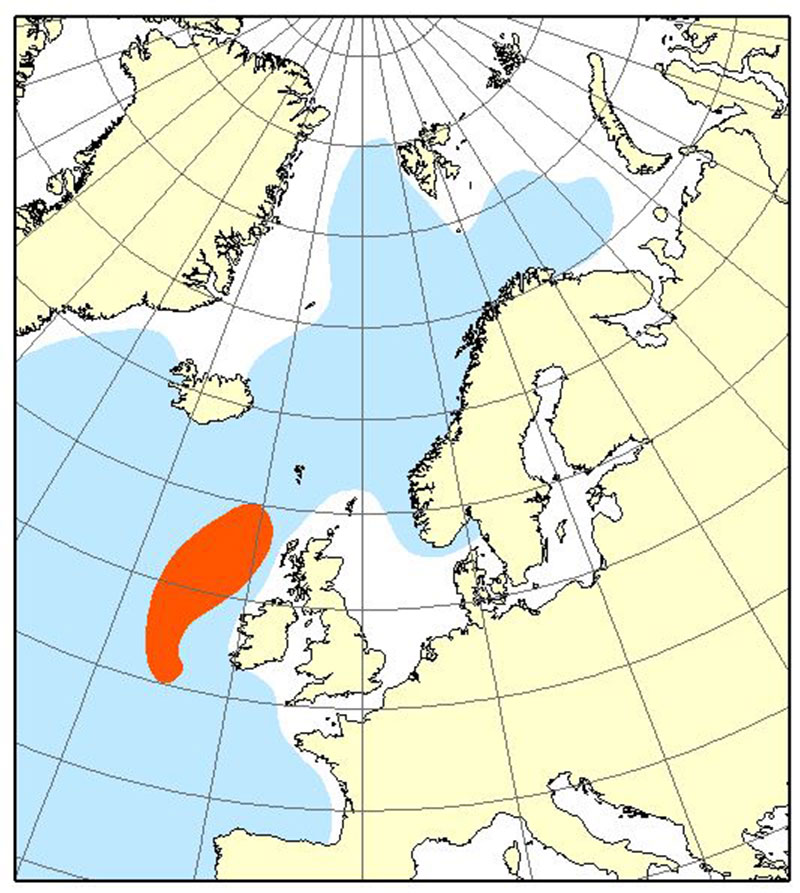 Saithe is a boreal species found in north-Atlantic waters (Figure 2.4.21). In the north-eastern Atlantic saithe is separated into six stocks: 1) west of Ireland; 2) west of Scotland; 3) at Iceland; 4) at the Faroe Islands; 5) in the North Sea; and 6) in the northeast Arctic — along the coast of Norway (62º N at Møre to Kola Peninsula) and the south-eastern Barents Sea. It also occurs at Svalbard in low abundance.

Tagging studies indicate that saithe undertake both feeding and spawning migrations; there are also migrations between stocks. Young saithe may migrate extensively from the western Norwegian coast to the North Sea. Adults follow Norwegian spring-spawning herring far out into the Norwegian Sea, sometimes all the way to Iceland and Faroe Islands. Saithe occur in both pelagic and demersal zones of the water column, at depths from 0-300 m. They often occur in dense concentrations, e.g. in the pelagic zone where currents concentrate their prey items. Predominant prey items for young saithe are Calanus copepods, krill, and other crustaceans.  With age they become increasingly piscivorous and prey on: herring; sprat; young haddock; Norway pout; and blue whiting. In the northeast Arctic saithe spawn during winter; peak spawning occurs during February at 150-200 m depths and temperatures from 6–10 ˚C. They undergo regular annual spawning migrations from the northern coast of Norway to areas off the western coast of Norway; they also sometimes migrate to northern regions of the North Sea, but to a lesser extent. Principal spawning areas are: Lofoten; Haltenbanken; and banks outside the Møre and Romsdal region. Eggs and larvae drift northward with the currents.  As nursery grounds, 0 age group saithe use shore areas extending on the western coast of Norway to south-eastern regions of the Barents Sea. They migrate to coastal banks as 2–4 year olds.

Long rough dab (Hippoglossoides platessoides) are abundant and widely distributed in the Barents Sea. As one of the most common groundfish species, it plays an important role in the benthic community. Because it is hardly fished commercially, detailed information on its life history and ecology is limited, and physical processes which influence the dynamics of this species are not well understood. During 2004-2013, ecosystem survey swept-area measures of abundance for long rough dab have been between 300,000 and 600,000 metric tons (tonnes). This is likely a minimum estimate of stock abundance.