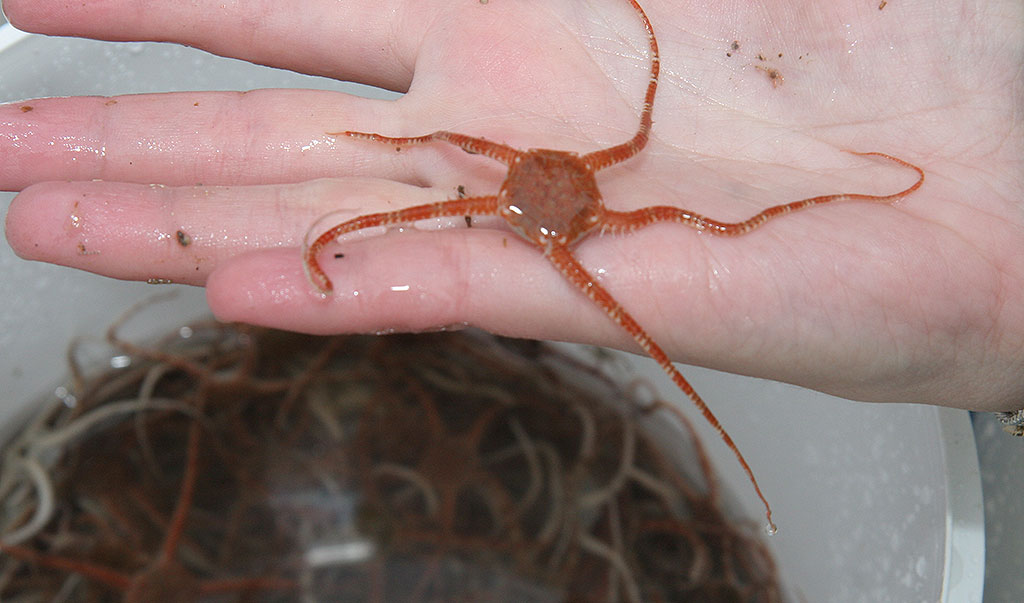 Benthic ecosystems in the Barents Sea have considerable value, both in direct economic terms, and in their ecosystem functions. Benthic fauna are an integral component of the ecosystem, and benthic processes are tightly linked to total system dynamics. A total of 3,245 faunal taxa have been recorded — of this total, benthic macrofauna (60%) and meiofauna (34%) make up the majority — and more than 3,050 species of benthic invertebrates inhabit the Sea (Sirenko, 2001).

A wide range of organisms are incorporate; some are buried in sediment; others are attached to a substrate; some are slow and sluggish; others roving and rapid. Many feed by actively or passively, sieving food particles or small organisms from the water. Others are detritus feeders eating bottom sediments, are scavengers eating carrion, or are carnivores actively hunting other animals. The diversity among bottom animals is believed due to the number of viable micro-habitats. In shallow waters, kelp forests form feeding and nursery habitats for many species of fish, birds, and mammals. Below the sublittoral zone, sea anemones, sponges, hydrozoans, tunicates, echinoderms, crustaceans, molluscs and many other animal groups abound on hard substrates. These large conspicuous animals are not abundant on sand or muddy bottoms.  In fact, some of these habitats may at first look rather lifeless. However, most benthic animals in these habitats live buried within the sediments. Polychaete worms, crustaceans, bivalves, and a number of other taxa are found in the sediments. Muddy areas often form habitat for dense aggregations of brittle stars, sea stars, or bivalves.

Iceland scallop (Chlamys islandica), northern shrimp (Pandalus borealis), red king crab (Paralithodes camtschatica), and snow crab (Chionoecetes opilio) are benthic residents which are harvested commercially.  Many species of benthos are also interesting for bio-prospecting or as a future food resource, such as sea cucumber, snails and bivalves. Several of them are crucial to the ecosystem. Important fish species such as haddock, catfish and most flatfishes primarily feed on benthos. Many benthic animals, primarily bivalves, filter particles from the ocean and effectively clean it up. Others scavenge on dead organisms, returning valuable nutrients to the water column. Detritus feeders and other active diggers regularly move the bottom sediments around and therefore increase sediment oxygen content and overall productivity – much like earthworms on land (ICES AFWG, 2014).

The benthic community is regulated by several factors, but multivariate analyses indicate that water depth and sediment type (i.e., predominant grain size) are consistently the factors determining the composition of the benthic fauna (e.g. Kendall, 1996; Dahle et al., 1998; Carroll et al., 2000). Our current understanding of the patterns of benthic fauna in the Sea is based largely on bathymetric features and distribution of sediments. Characterization of the entire Barents Sea as a ‘‘shelf sea’’ tends to oversimplify the depth variation and bathymetric complexity of the region. Species diversity is relatively high compared to other Arctic seas, with the number of species steadily declining eastwards with distance from the North Atlantic; this trend is attributed to the influence of the Arctic Ocean.  Most (80%) of total benthic faunal biomass is due to 24 taxa, with 50% of that attributable to only 8 species (Wassmann et al., 2006).

Eight (8) squid species occur in the Barents Sea (Golikov et al., 2008). The flying squid Todarodes sagittatus was a significant fishing resource in Norwegian waters during several periods up about 1988 (Borges, 1990). However, since then this squid has almost been absent from our waters and only sporadic catches have been recorded. Gonatus fabricii is another abundant squid species in the off shore waters of the Barents and the Norwegian Sea (Bjørke, 1995). This squid is important food for several bird and cetacean species, but could probably also be seen as a potential fishing resource.