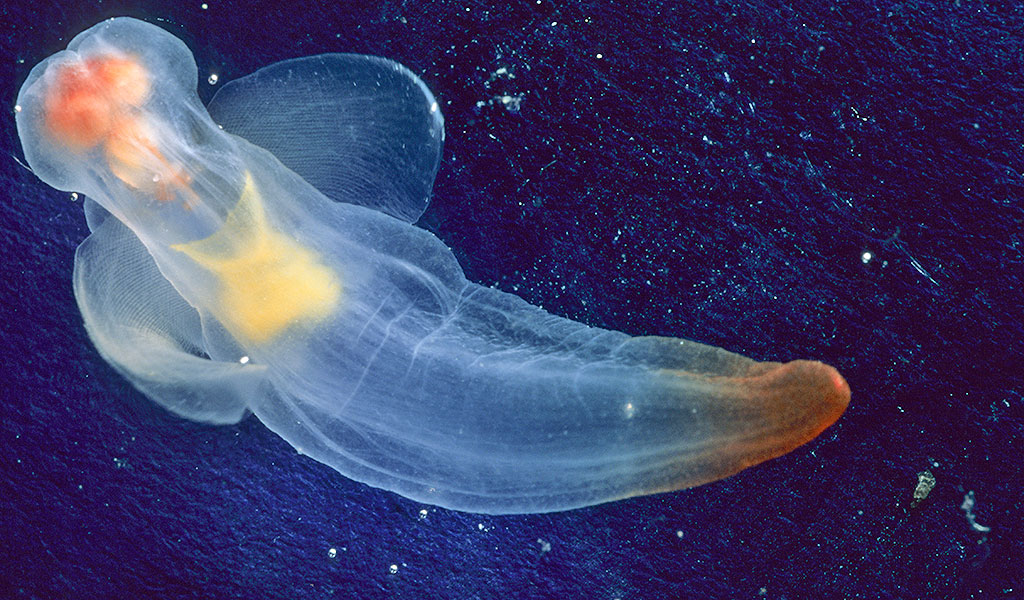 In the Barents Sea ecosystem, zooplankton forms a link between phytoplankton (primary producers) and fish, mammals and other organisms at higher trophic levels. The most abundant zooplankton species — calanoid copepods, krill, and hyperiid amphipods — form the major diet of herring, capelin, polar cod, and juveniles of other fish species. The Arctic front in the Barents Sea marks the boundary between the mainly Arctic zooplankton species (Calanus glacialis and Themisto libellula) and the Atlantic/subarctic species (C. finmarchicus, Meganyctiphanes norvegica, Thysanoessa spp and Themisto spp).

Favorable conditions for the phytoplankton bloom/primary production at the ice edge as it retracts during summer and autumn, temporarily support large concentrations of crustaceans and other zooplankton species that are forage for seabirds, mammals, and fish. Blooms in Atlantic waters are not as intense as blooms at the ice edge; they occur over a longer period of time, however, and have higher total phytoplankton production. The spring bloom in Atlantic waters is of particular importance for reproduction of Calanus finmarchicus — the predominant herbivorous copepod in the central Barents Sea. It has an annual life cycle, and each new generation develops during spring and summer, being nourished by the seasonal phytoplankton bloom.

Among omnivorous zooplankton, krill (e.g. Thysanoessa spp.) are considered most important. Thysanoessa inermis and T. longicaudata dominate the central and northwestern Barents Sea, whereas distribution of T. raschii is restricted to shallow waters in the southeast region. Carnivorous zooplankton such as hyperiid amphipods (Themisto spp.) may feed on C. finmarchicus; they compete with fish that consume zooplankton.

Herbivorous zooplankton in high latitude and ice-covered seas is exposed to large variations in food availability, not only between seasons (Lee and Hirota 1973; Falk-Petersen et al., 2000b) but also between years, decades and longer periods (Falk-Petersen et al., 2007; 2009). The pelagic Calanus species, being one of the major components of the Arctic marine ecosystem must, therefore, be adapted to an environment changing markedly on different time scales. This readily accounts for the biodiversity of the Calanus complex in terms of the species‘different life strategies, different ecological niches and different centers of distribution.

The interconnected current systems in the Atlantic and Arctic transports Calanus finmarchicus, C. glacialis and C. hyperboreus long distances and they are found distributed all over the Arctic, including the Norwegian Sea, the Barents Sea, the White Sea, the Arctic Ocean, the Greenland Sea and coastal waters bordering Siberia, East Canada and Alaska. The different species do, however, originate from different centers of distribution and are used as indicator species for the different water masses (Van Aken et al. 1991). The three Calanus species also have different core areas for over-wintering, the Norwegian Sea being central for Calanus finmarchicus, the Arctic shelf area for C. glacialis and the Greenland Sea and the Arctic Ocean for C. hyperboreus (Jaschnov, 1970; Runge et al., 1986; Conover, 1988; Tande, 1991; Hirche and Mumm, 1992; Hirche and Kwasniewski, 1997; Hirche, 1997).

Despite the fact that the coastal part of the Barents Sea (the Kola Peninsula coast) has lower index of maximum biomass, production possibilities of this water area are considered to be rather high. For example, maximum biomass in the 50 m surface layer within the limits of 20 miles from the coast in the area from Kildin Island till the Svyatoy Nos Cape constitutes 1300 mg/m3 (July). For comparison, for the similar period in the open part of the Barents Sea this
index is 2000 mg/m3 (Kamshilov et al., 1958).

In a qualitative sense, zooplankton in the coastal area is characterized by the presence of more than 100 species, instars (stages between molts), and life-forms. Though, only 20 of these species play an important role in the formation of total community biomass, they comprise more than 100 individuals/m3. Besides C. finmarchicus and euphausiids, representatives of Metridia, Oithona, Pseudocalanus, Acartia, Temora, Cladocera, larvae of acorn shells, and polychaetes (Kamshilov and Zelikman, 1958; Fomin, 1978, 1985) are also included in this category.

Overall picture of zooplankton community seasonal changes is the following. The period from March till the middle of May is characterized by rapid growth of meroplanktonic forms. The most abundant of them are larvae‘s of barnacles (Cirripedia) and polychaetes (Polychaeta). In the given period of time quantitative rates of holoplanktonic organisms are noticeably lower than those of meroplanktonic forms. Gradual change of species complexes takes place by the end of July. Holoplanktonic organisms represented mainly by copepods C. finmarchicus, Pseudocalanus elongatus, Oithona similis, Acartia sp., Temora longicornis, Microcalanus sp. take leading positions. The end of June – August is a typical summer stage in seasonal community development. This stage is characterized by maximum of biomass during the year and by significant species diversity. Further (in the middle of August – September) gradual transition of community to climacteric state takes place. This process is expressed by reduce of total quantitative parameters of zooplankton, gradual extinction of larval forms of bottom invertebrates in pelagic zone and by growth cessation of major copepods species. Winter stages of seasonal succession demonstrate a total minimum of holoplanktonic organism biomass and an absence of benthos invertebrate larvae (Fomin, 1985, Druzhkov, Fomin, 1991).

In the Barents Sea ecosystem, the zooplankton forms a link between phytoplankton (primary producers) and fish, mammals and other organisms at higher trophic levels. The most abundant zooplankton species are calanoid copepods, krill, and hyperiids amphipods which form the major diet of herring, capelin, polar cod, and juveniles of other fish species. The Arctic Front in the Barents Sea marks the boundary between the mainly Arctic zooplankton species (Calanus glacialis and Themisto libellula) and the Atlantic/subarctic species (C. finmarchicus, Meganyctiphanes norvegica, Thysanoessa spp, Themisto abyssorum and Themisto compressa). Among omnivorous zooplankton, krill (e.g. Thysanoessa spp.) are considered most important. Thysanoessa inermis and T. longicaudata dominate the central and northwestern Barents Sea, whereas distribution of T. raschii is restricted to shallow waters in the southeast region. Carnivorous zooplankton such as hyperiids amphipods (Themisto spp.) may feed on C. finmarchicus; they compete with fish that consume zooplankton.

Long-term monitoring data indicate substantial year-to-year variations in indices of biomass and abundance for zooplankton in the Barents Sea (Figure 2.4.7 and Figure 2.4.8). In Figure 2.4.7, the highest average biomass during this period was recorded in 1994 and 1995 with a minor peak in 2006. During 1988-1992, average zooplankton biomass was low relative to the estimated average value for the last 11 years. A comparable trend is reflected in data from the upper water column 0-100 m during the period 1988-2008 (not shown, as this series is now terminated). Data from bottom-0 m and 100-0 m indicate that during the period of the ecosystem survey (August-September) the zooplankton have initiated their seasonal vertical migration to deeper water to overwinter. It is also apparent that smaller zooplankton (180-1000 μm size fraction), are relatively more abundant in 0-100m depth interval, and are more important in the upper water column during this time of the year. We observe particularly for 2008 that the biomass size-fraction 1000-2000μm (bottom-0m), which normally contains a substantially amount of the older Calanus stages, was significantly reduced in 2008 compared to the previous years, while the 180-1000 μm size-fraction was considerably larger than what was observed the two preceding years. This might suggest that the overwintering stock of Calanus in the central- and western region of the Barents Sea was significantly reduced in 2008. During the last six years the total size fractionated biomass has been only slightly below the long-term mean with the exception of 2012, but dropped markedly below the long-term mean in 2013. Also the biomass in size-fraction 1000-2000μm increased steadily from 2008, while a drop occurred in 2013 (Figure 2.4.7). It is noted that the biomass in the largest size fraction >2000 μm has been more or less decreasing from 2006 till present.

The development of the krill stock of the Barents Sea (Figure 2.4.8) shows a moderately increasing trend over the last 10 years, with slightly less variation in the north-western area compared to the southern area. It is indeed interesting to compare this increase in abundance to the dietary preferences of capelin in various regions of the Barents Sea, which shows an increased importance of euphausiids in the capelin diet.

Figure 2.4.5. Long-term size composition of zooplankton biomass (WP2 net) in the water column (bottom to 0 meter depths) from the central-western part of the Barents Sea (Norwegian data only). 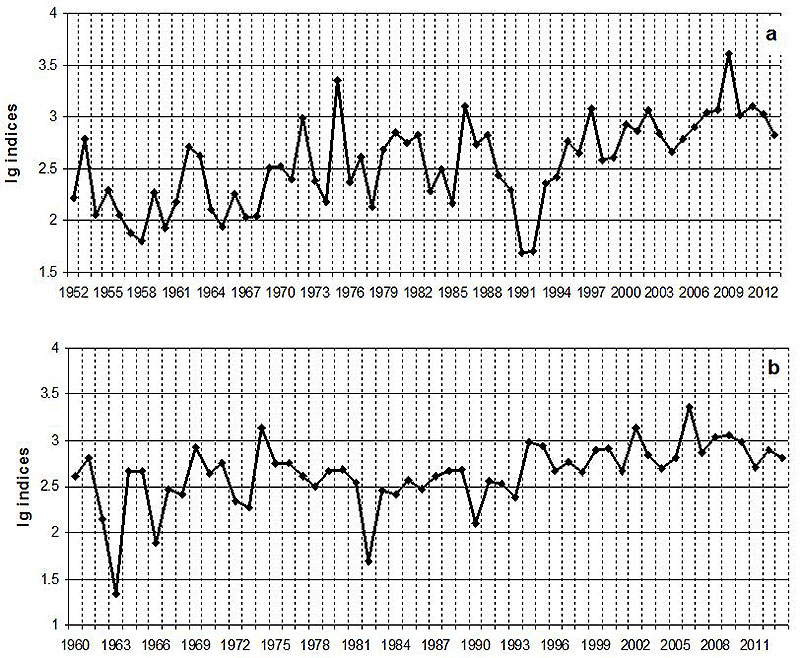 Figure 2.4.6. Variation in abundance indices of krill in southern (a) and north-western (b) regions of the Barents Sea (data from macroplankton survey conducted by PINRO).

Gelatinous zooplankton is a term often used expression by non-specialists in reference to classes of organism that are jelly-like in appearance. The term "jellyfish" is commonly used in reference to marine invertebrates belonging to the class Scyphozoa, phylum Cnidaria. Neither of these terms implies any systematic relationship to vertebrate fish. The term "jellyfish" is also often used in reference to relatives of true scyphozoans, particularly the Hydrozoa and the Cubozoa. In the Barents Sea ecosystem, however, comb-jellies (phylum Ctenophora) and cnidarians (phylum Schyphozoa) are the predominant representatives of "gelatinous zooplankton".

Both comb-jellies (Ctenophora) and "true" jellyfish are predators and many possibly compete with plankton-eating fish, as copepods often are significant prey items for both groups, although little is known about their prey and size preferences, nor the succession of various groups of “jellyfish”. Along with increased temperatures, and changes in other components of the Barents Sea ecosystem, research interest has increased to understand how these changes effect abundance and distribution of gelatinous zooplankton and their prey.