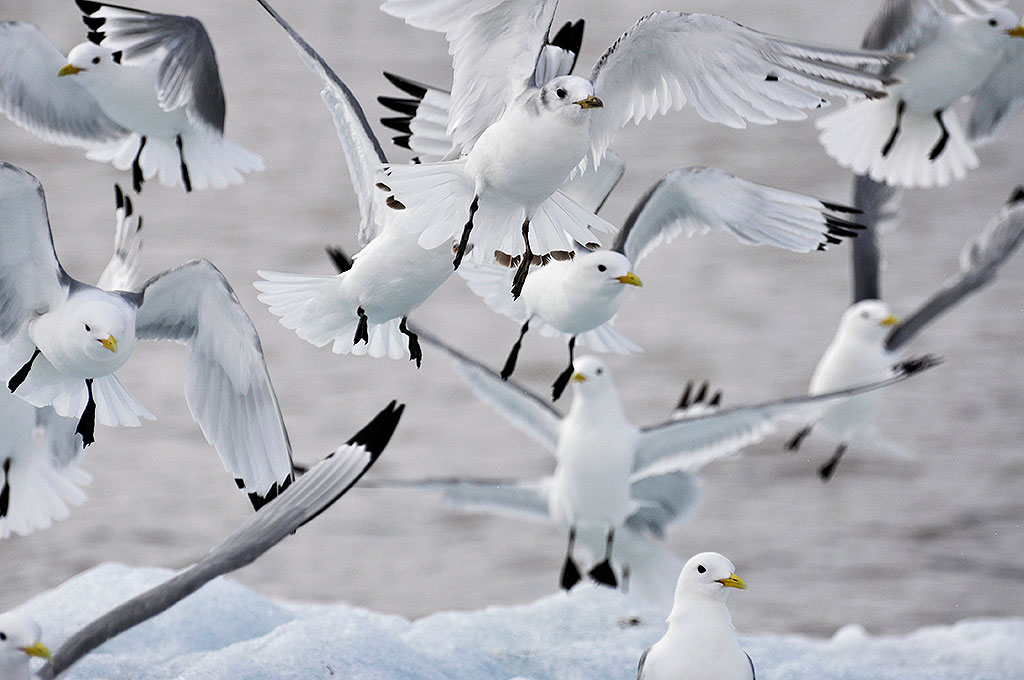 The Barents Sea Region supports some of the largest concentrations of seabirds in the world. A total of 33 species breed regularly in the region, and about 20-25 million seabirds harvest approximately 1.2 million tonnes of biomass annually from the area.Seabirds spend most of the year at sea, visit land only to breed and find all their food in the marine environment (Schreiber and Burger, 2002). Typically, they form large breeding colonies on inaccessible places along the coast or on remote islands.

Seabirds are characterized by long life (10-40 years), deferred maturity (breeding age delayed up to five years of age), small clutch size (in many cases one egg) and extended chick rearing periods (sometimes up to several months; Schreiber and Burger, 2002). This life history implies that seabird populations are more vulnerable to factors that affect adult survival than factors that affect breeding success or the survival of immature (Gaston, 2004). Many seabirds are specialised top predators and changes in their behaviour or population dynamics may therefore reflect changes in the lower trophic levels at an early stage. This position makes them suitable as indicators of changes in the marine environment (e.g. Cairns, 1992; Furness and Camphuysen, 1997; Tasker and Furness, 2003).

Most of the species breeding in the region are to some extent migratory, utilizing the high productivity during summer. More than 50% of the Barents Sea might be covered with ice during winter. Although many populations leave the region during autumn and winter, they are replaced by other populations from breeding areas further to the east, wintering in the Barents Sea (e.g. Steller’s eider Polysticta stelleri and king eider Somateria spectabilis, Figure 2.4.29).

The Barents Sea Region (here defined as the north-eastern part of the Norwegian and Greenland Seas, and the Barents and White Seas) supports some of the largest concentrations of seabirds in the world (Norderhaug et al., 1977, Anker-Nilssen et al., 2000). About 20-25 million seabirds harvest approximately 1.2 million tonnes of biomass annually from the area (Barrett et al. 2002). The most numerous species are the Brünnich’s guillemot (1.25 mill. pairs), little auk (>1.000 000 pairs), Atlantic puffin (910 000 pairs) and black-legged kittiwake (680 000 pairs). Common too are Northern fulmar (500 000-1 000 000), common eider Somateria mollisima (158 000 pairs), herring gull Larus argentatus (122 000 pairs), common guillemots Uria aalge (104 000 pairs) and arctic tern Sterna paradisaea (65 000 pairs). In total, more than 5 million pairs of seabirds breed in the region. The Norwegian mainland, Novaya Zemlya and Svalbard are the three main breeding areas, supporting more than 80% of the total breeding populations in the region (Table 2.4.3). However, precise status estimates of different seabird species in the Barents Sea region are complicated due to lack of updated information from the eastern Barents Sea, especially Novaya Zemlya and Franz Josef Land. 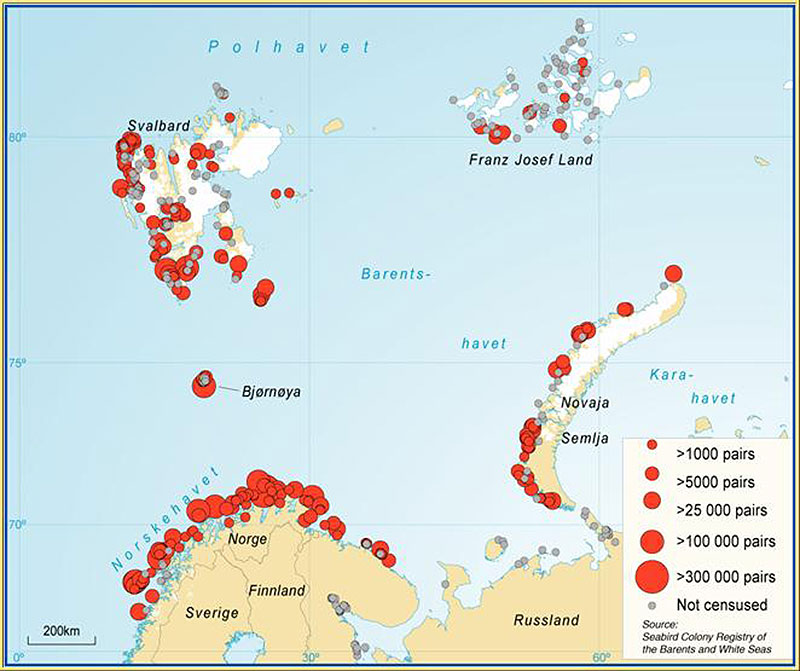 Figure 2.4.28. Seabird colonies in the Barents Sea Region. Source: The Seabird Colony Registry of the Barents and White Seas and NINA. 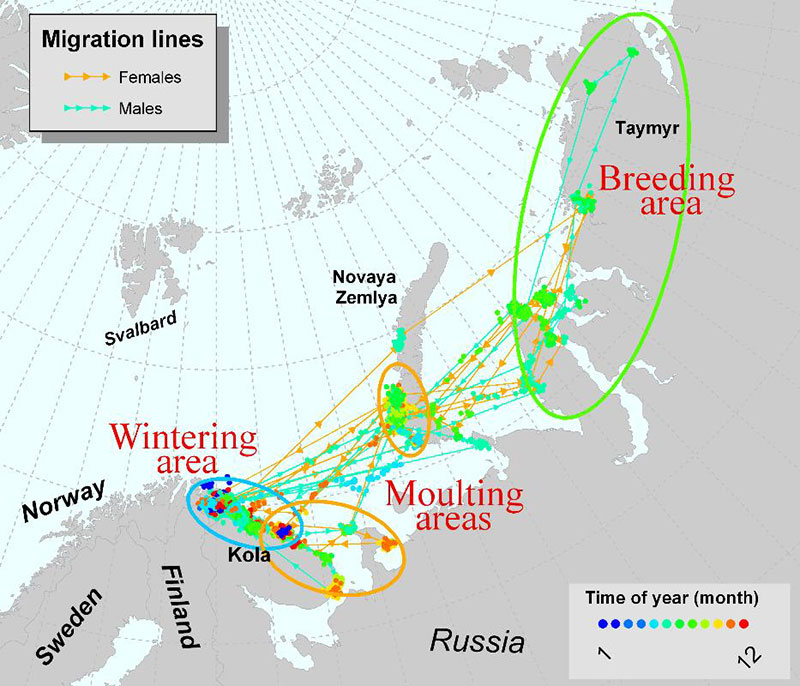 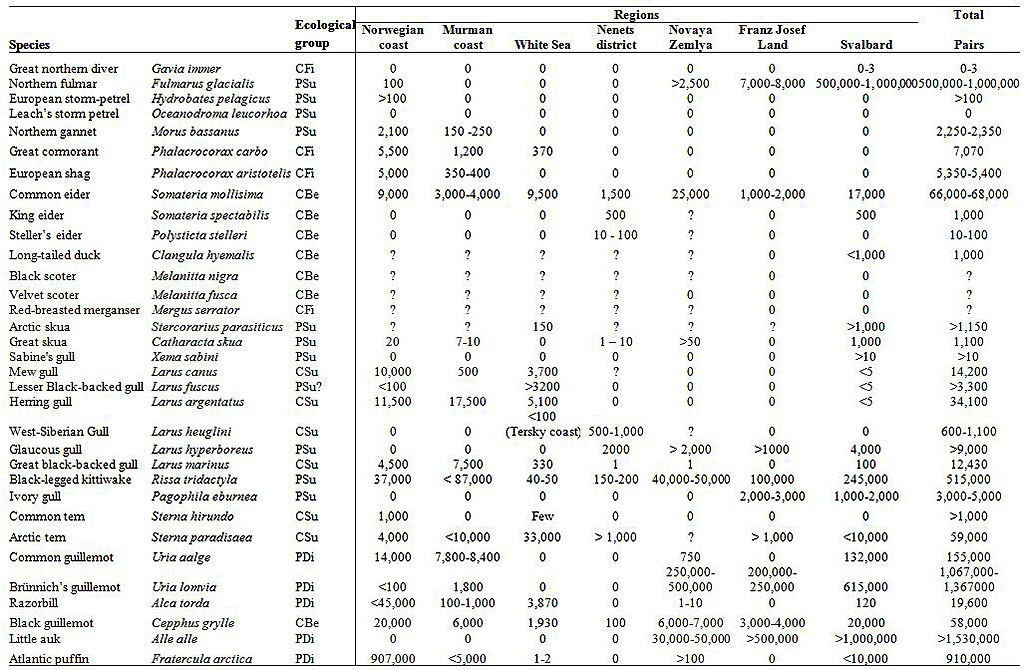 The high density of seabirds is a consequence of high primary production and large stocks of pelagic fish species such as capelin Mallotus villosus, herring Clupea harengus and polar cod Boreogadus saida. The composition of seabird communities in the Barents Sea reflects the environmental gradient from the warm Atlantic areas in the south to the cold ice-filled arctic areas in the North. In the north and east, the marginal ice-zone is an important feeding habitat where seabirds forage on migrating capelin, polar cod and zooplankton (Mehlum and Gabrielsen, 1993, Mehlum et al., 1996, Mehlum et al., 1998). The seabird communities in south and west depend on juvenile gadoids, juvenile herring, sandeels (Ammodytes sp.) and capelin (e.g. Anker-Nilssen, 1992, Barrett and Krasnov, 1996, Barrett et al., 1997, Fauchald and Erikstad, 2002). Atlantic puffins, black-legged kittiwakes and common guillemots dominate the seabird communities south of the Polar front while more arctic species such as Brünnich’s guillemots and little auks dominate in the north.

The most numerous seabird species

Together with the little auk, the Brünnich’s guillemot is probably the most numerous seabird in the Barents Sea Region. The largest colonies (several over 100 000 pairs) are on the Spitsbergen, Hopen, Bjørnøya (Bear Island) and the west coast of Novaya Zemlya. The Brünnich’s guillemots generally winter in waters off Iceland, Greenland and Newfoundland (Canada), although birds from Novaya Zemlya and Franz Josef Land probably remain in the Barents Sea throughout the year. Outside the breeding season Brünnich’s guillemots appear in coastal waters and at sea, often in ice-filled areas. Their diet consists mainly of fish and crustaceans. In the northern Barents Sea important prey items include polar cod and crustaceans.

A crude estimate of more than one million pairs has been made for the Barents Sea little auk population, and the global population is set to more than 40 million pairs. Little auks feed in both inshore and offshore waters. Their main food during the breeding season consists of small crustaceans, especially copepods, Calanus spp. Outside the breeding season, the little auk is pelagic and migrates to wintering areas off south-western Greenland. Some little auks may also winter around Svalbard, in the Barents Sea and along the Norwegian coast south to the Skagerrak.

The black-legged kittiwake is the most common gull in the Barents Sea region and breeds in all sub-regions. It is also the most numerous species of gull in the world, and the most oceanic in its habits. The total breeding population in the Barents Sea region is estimated to be 680 000 pairs. It can be observed in all coastal areas as well as at sea, including ice-filled waters. The largest colonies are found on Bjørnøya, Hopen and the west coast of Novaya Zemlya. The black-legged kittiwake feeds mainly on small fish up to 15-20 cm long and invertebrates, but they also scavenge offal or discarded fish behind fishing boats. In the northern Barents Sea, capelin, polar cod, amphipods and euphausiids are important components of their diet. However, the composition of the diet changes between areas and seasons. Kittiwakes disperse widely over most of the North Atlantic outside the breeding season.

The northern fulmar is restricted to the north-western part of the Barents Sea region, with a large breeding population in Svalbard. The northern fulmar is primarily a pelagic species which remains far out at sea except during the breeding season. Even during breeding it sometimes make long foraging trips. Fulmars breeding on Bjørnøya are known to feed in the central Barents Sea as well as along the coast of North Norway during the chick-rearing period (Weimerkirch et al., 2001). They feed on small pelagic animals caught near or on the sea surface; in Svalbard they feed mainly on squid, polychaetes, pteropods, crustaceans and small fish. They also scavenge fishery discards and offal. In the Arctic, the fulmar can be seen both in open seas areas and in ice-filled waters.

In the Barents Sea region, the Atlantic puffin breeds primarily in North Norway and western Murman coast, but also in small scattered colonies in Novaya Zemlya, Spitsbergen and Bjørnøya. In the autumn, puffins gather in the Barents Sea. The wintering areas for the different populations are not known, but many birds winter in the southern Barents Sea and further to the south in the Norwegian Sea (Figure 2.4.30; www.seapop.no). The Atlantic puffin feeds mainly on small schooling fish. Crustaceans, squid and polychaete worms are also important food items for some populations, especially outside the breeding season. Most puffins search for food in offshore, pelagic waters. In the nonbreeding season they are pelagic in their distribution and feeding habits.

The common eider is the most numerous breeding sea duck inhabiting the entire coastline of the Barents Sea Region. It is relatively sedentary and forms local populations. Common eiders breed on small islets where they are relatively safe from mammalian predators as long as there is no sea ice. They breed in colonies of variable size and density, but may also nest solitarily. The common eiders feed on various benthic animals; blue mussels Mytilus edulis are a preferred food source, which they catch by diving down to about ten metres. Small crustaceans, echinoderms, annelids and small fish and their fry found in the inter-tidal zone and shallows are also part of their prey. Common eiders in the high arctic are migratory, and leave the breeding grounds, wintering along the coast of Kola and Northern Norway. Some birds from Spitsbergen winter in Island (Bakken et al., 2003). Some birds may spend the winter in the restricted ice-free waters off the west coast of Svalbard, and possibly west off Novaya Zemlya. Mainland common eiders do not migrate far, and winter largely within the breeding range, leaving only the most easterly regions. In mid winter, the numbers of common eiders in eastern Finnmark, Norway, increases with about 50 000 individuals, indicating that birds from Russian populations move to this area (Figure 2.4.31). Also, there is an increase in the wintering population in western Finnmark from mid November, which corresponds to the size of the Svalbard population. King eiders show a similar migration pattern.

Seabirds play an important role in transporting organic matter and nutrients from the sea to the land (Ellis, 2005). This transport is of great importance especially in the Arctic, where lack of nutrients is an important limiting factor. This is especially evident e.g. in the high-Arctic archipelagos of Svalbard and Franz Josef Land and rich vegetation is found below the seabird breeding colonies, which is grazed by reindeers Rangiferus rangiferus, geese (Branta spp. and Anser brachyrhynchos) and ptarmigan Lagopus mutus.