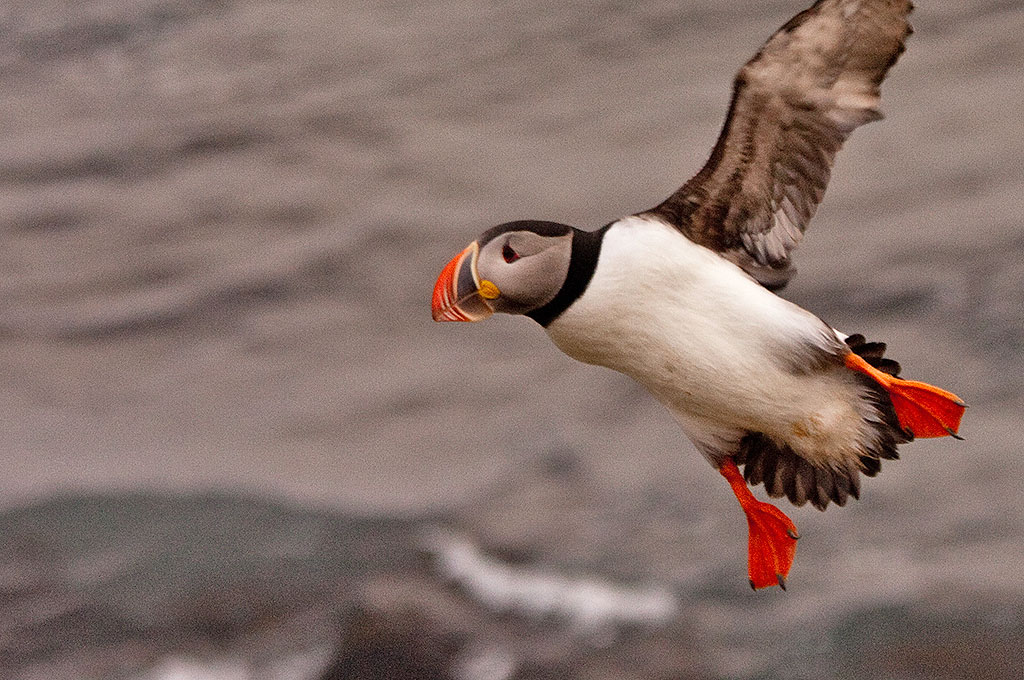 In this chapter we handle species of particular conservation concern due to their population status. These are the species present in the Barents Sea area and listed on the Global Red List (IUCN, 2008), the Russian Red Data book (Danilov-Danilyan et al., 2001 -  Russia is preparing a new edition of the Red Book of the Russian Federation, in which will change the lists and categories of the rarity of certain species, subspecies and populations of animals. But while the book is not published,

this section use the existing Red Book of the Russian Federation (2001)) and/or the Norwegian Red List (Kålås et al., 2006). In this report the groups of species included are restricted to mammals, birds and fish species. This is caused by the general lack of knowledge and lack of relevant assessments for the other taxonomic groups for the Barents Sea area. Some information is available in the Norwegian 2006 Red List, but both the Global Red List and the Russian Red Data Book include to a minor degree such assessments. For future reports the goal should be to include a far broader spectre of taxonomic groups.

This chapter includes species that either have very small populations or species that have recently undergone considerable population decline (or are expected to do so in the close future). The assessments are done by use of the IUCN criteria (IUCN 2001, 2003), but the Global, the Russian and the Norwegian lists can not be directly compared. The Global list is the global assessment (IUCN 2001), and includes assessments for the global population of the actual species. The Norwegian Red List is a regional red list using the IUCN categories and criteria on a Norwegian scale (IUCN 2003), i.e. covering the Norwegian populations and 'rescuing' effects from neighbouring populations. Framework for the Red Data Book of the Russian Federation is based on the Federal law “On the Environmental Protection" (10 January 2002), on the Federal law "About animal world" (5 May 1995), and on the Decree of the Government of the Russian Federation # 158 (19 February 1996), which stated the Red Data Book of the Russian Federation to be an official document providing information about the rare and endangered species of animals and plants, as well as necessary measures for their protection and recovery. In other words, it represents a state inventory of such species as well as scientific background for their conservation strategies in Russia. However, all these lists are closely related and have high relevance for the conservation of biodiversity.

We here present the relevant species in a table (Table 2.4.7) that in addition to the Red List categories also gives information about the species status on relevant international conventions or agreements. But be aware that all the conventions/agreements are not relevant for all species groups. This table includes a total of 56 species, comprised of 28 fish species, 9 bird species, and 16 mammal species. We don't present more details on particular species in this chapter. Such information is included in the main chapters on fish, birds, and mammals. 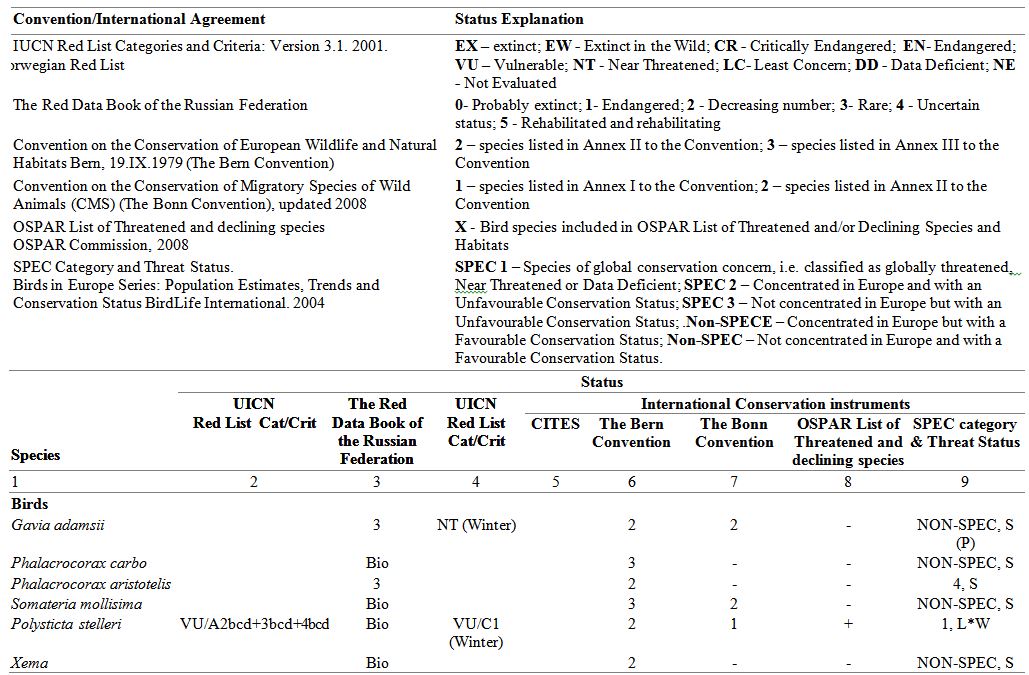 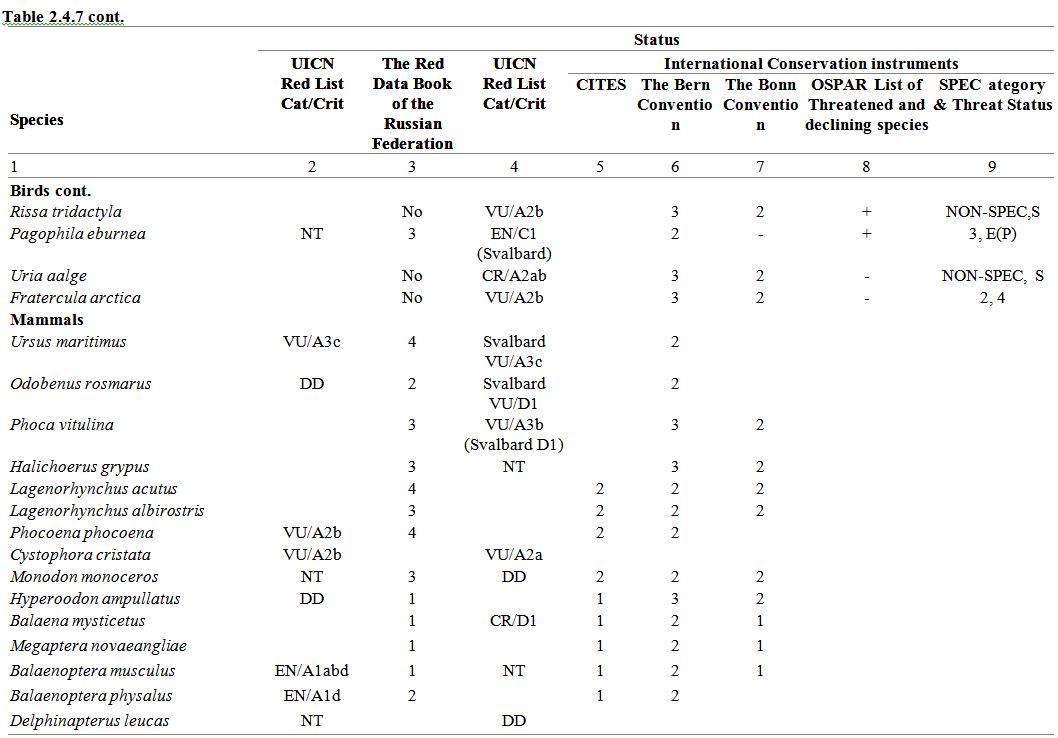 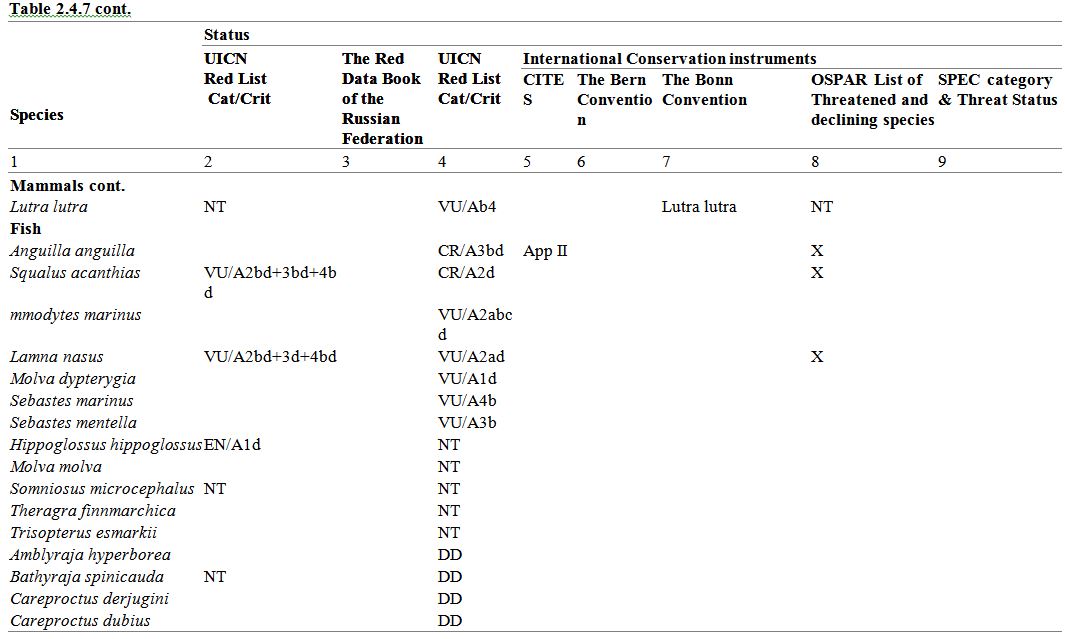