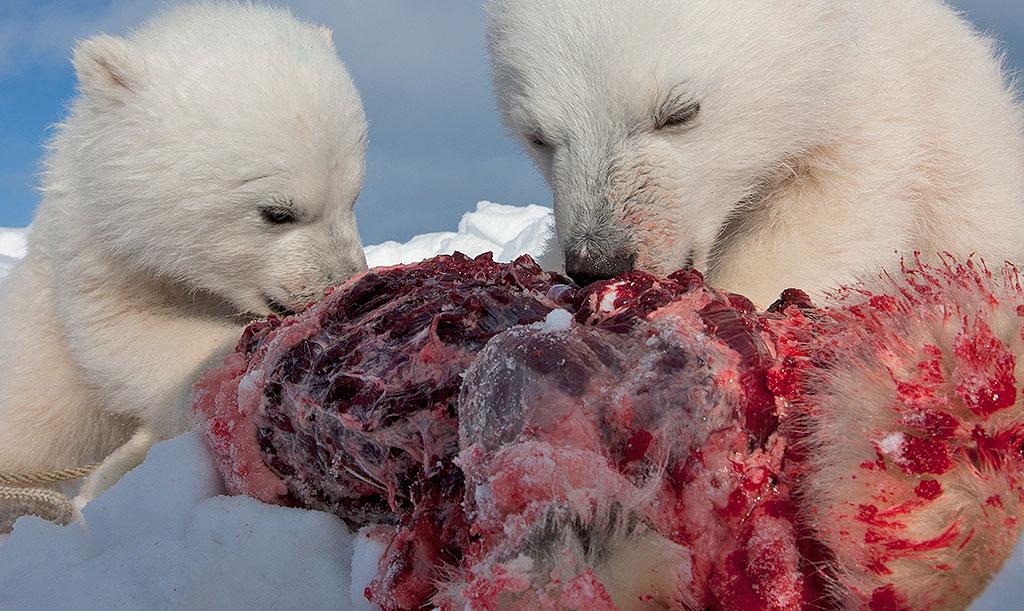 The composition and migratory habits of living organisms in the Barents Sea are determined by the contrast of the environmental conditions between the Atlantic and the local water masses (Matishov 1986a). The food web has 5-6 trophic levels: phytoplankton → zooplankton → pelagic fish → demersal fish → sea birds → marine mammals (including polar bear Ursus maritimus). Species diversity is relatively high compared to other Arctic seas. A total of 3,245 faunal taxa have

been recorded in the Barents Sea (Sirenko, 2001). Of this total, benthic macrofauna (60%) and meiofauna (34%) comprise the vast majority of known species. Most (80%) of the total benthic faunal biomass can be identified within 24 taxa, with 50% attributable to only 8 species. These benthic organisms — bottom assemblages of fish and invertebrates, both commercial and non-commercial — channel a significant part of the energy flow through the system (Wassmann et al., 2006) (Figure 2.6.1).

Figure 2.6.1. General scheme of food web in the Barents Sea ecosystem (From Yaragina and Dolgov, 2009).

As in other marine systems, phytoplankton constitutes the main source of primary production in the Barents Sea. As such, changes in annual phytoplankton production — in response to variability in climate and oceanographic conditions — will directly affect overall functioning of the marine ecosystem. Zooplankton species form the trophic link between phytoplankton (primary production) and organisms higher in the food chain. Hence, favorable conditions for the phytoplankton bloom/primary production at the ice edge — as it retracts during summer and autumn — temporarily support large concentrations of zooplankton species, which are forage for fish, seabirds, and mammals. Blooms in Atlantic waters are not as intense as blooms at the ice edge; they occur over a longer period of time, however, and result in higher total phytoplankton production. Primary production increases rapidly in spring, when mixed-layer depth decreases above the critical depth and algae receive sufficient light to grow and accumulate. This may take place earlier in the marginal ice zone where ice-melt and brine formation induce an early stratification. Production acceleration in the more southern Atlantic Water depends on a more slowly evolving thermal stratification (Falk-Petersen et al., 2000; Wassmann et al., 2006).

The spring bloom in Atlantic Water is of particular importance for reproduction of Calanus finmarchicus — the predominant herbivorous copepod in the central Barents Sea. It has an annual life cycle, and each new generation develops during spring and summer, being nourished by the seasonal phytoplankton bloom. Carnivorous zooplankton such as amphipods (Themisto spp) may feed on C. finmarchicus in competition with plankton-feeding fish such as capelin and herring. At the same time, carnivorous zooplankton species become prey for these same fish species. Among the omnivorous zooplankton, krill species (e.g. Thysanoessa spp) are regarded as the most important. The main zooplankton species on the Atlantic side of the Barents Sea are C. finmarchicus and Thysanoessa inermi; whereas in Arctic waters larger species such as Calanus glacialis, and amphipods (Thermisto libellula) dominate (Melle and Skjoldal 1989; Dalpadado and Skjoldal 1996; Dalpadado 2002; Ellingsen et al., 2008). Variability in temperature, salinity, wind conditions, and sea-ice dynamics affect primary (phytoplankton) and secondary (zooplankton) production (Rey, 2004; Wassmannetal, 2006). During cold climatic periods, primary production in the Barents Sea can decrease due to increased ice coverage and, hence, reduced area for production. This may in turn result in reduced secondary production during cold periods (Yarangina and Dolgov, 2009).

Cod is the top predator in the Barents Sea; its diet is a good indicator of the state of the ecosystem. Capelin is the most important prey for cod (Bogstad and Mehl, 1997; Bogstad and Gjøsæter, 2001). Other important prey items for cod include: krill (Euphausiacea); polar cod; amphipods (mainly Hyperiidae); shrimp (Pandalus borealis); haddock (Melanogrammus aeglefinus); herring; blue whiting (Micromesistius poutassou); and juvenile cod. It may also consume significant amounts of adult herring (Bogstad and Mehl, 1997). Apart from cod, other abundant piscivorous fish stocks in the Barents include: haddock; deep-sea redfish (Sebastes spp.); Greenland halibut (Reinhardtius hippoglossoides); long rough dab (Hippoglossoides platessoides); and thorny skate (Raja radiata) (Bogstad et al., 2000; Dolgov, 2002). In recent years, biomass estimates for other piscivorous fish species in the Barents have been low compared to that of cod and haddock (Eriksen (Ed.), 2014). Based on available information on the diet and consumption of these species, less than half the total prey consumed is fish (Wassmann et al., 2006).

The Barents Sea has a diverse and abundant seabird community; and one of the largest concentrations of seabirds in the world (Norderhaug et al., 1977; Anker-Nilssen et al., 2000). These common and ecologically important species acquire all or almost all of their diet from the sea — where they consume considerable amounts of fish and invertebrates — and remain within the Barents Sea region during a substantial part of the year. The consumption of marine prey by birds results in a large return of nutrients to the marine ecosystem as excrement (Zelikman and Golovkin, 1972; Wassmann et al., 2006). Peak seabird abundance occurs in the spring–summer season. An estimated 20 million seabirds harvest approximately 1.2 million tons of biomass from the Barents region annually (Barrett et al., 2002). In doing so, they play an important role in transporting organic matter and nutrients from the sea to the land (Ellis, 2005). This transport has particular significance for production in the Arctic, where lack of nutrients can be an important limiting factor. While most seabirds migrate out of the Barents during winter, some species remain throughout the year. Sea ice conditions affect their abundance. ‘‘Warm’’ years with little ice show a higher number of guillemots in at-sea surveys of the Barents compared to ‘‘cold’’ years (Erikstad et al., 1990). The distribution of seabirds in the Barents is mainly determined by food availability and distribution. During winter and spring, most seabirds are found close to the food-rich ice edge and the Polar Front. In spring and summer, most seabirds are concentrated around breeding colonies. Major seabird colonies are found on Bear Island, Hopen, southeastern part of Svalbard, Troms and Finnmark County, the Murman and Nenets coasts, Novaja Zemlja, and Franz Josef Land (Wassmann et al., 2006).

Marine mammals are consumers of production at several trophic levels in Arctic systems, and because of their large body size and the abundance of some species, they are thought to have an important top-down influences on the structure and function at lower levels of the food web (Bowen, 1997). Marine mammals which have adapted to become year-round residents in the Barents Sea include walrus (Odobenus rosmarus), ringed seal (Phoca hispida), bearded seal (Erignathus barbatus), white whale (Delphinapterus leucas), narwhal (Monodon monoceros), and bowhead whale (Balaena mysticetus). Harp seal (Pagophilus groenlandicus) is a resident in both the Arctic and sub-Arctic parts of the Barents Sea. Harbour seal (Phoca vitulina) reside year-round in the Arctic at Svalbard, but this species, along with the grey seal (Halichoerus grypus), has a range that is rather restricted to north-temperate areas, i.e., in the southern parts of the Barents Sea. Marine mammals which seasonally migrate to the Sea include Minke whale (Balaenoptera acutorostrata), fin whale (B. physalus), humpback whale (Megaptera novaeangliae), white-beaked dolphin (Lagenorhynchus albirostris), harbour porpoise (Phocoena phocoena), and to a lesser extent - killer whale (Orcinus orca) and blue whale (Balaenoptera musculus) (Wassmann et al., 2006).