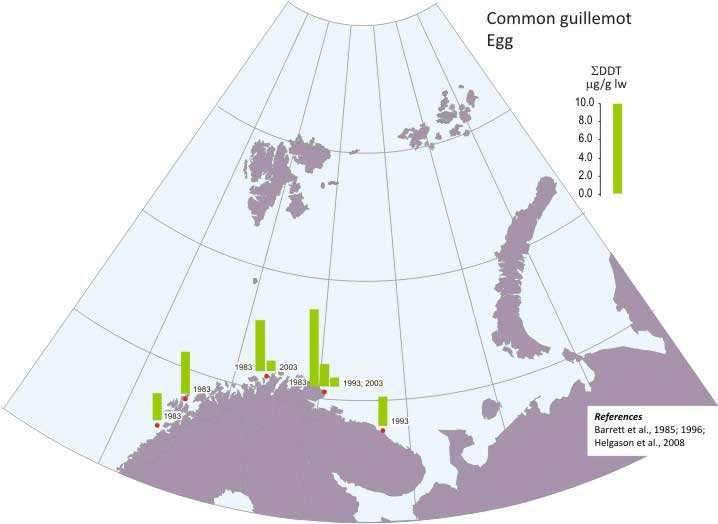 PBDEs are accumulating in the environment, including humans, and have shown an exponential increase over the past few decades.

The persistence and bioaccumulative characteristics of PBDEs and their similarities to known toxic PCBs, raises concern over potential human health effects, especially during early development.
PBDEs increased in the period from 1983 to 1993 and then leveled out from 1993 to 2003.

Overall the levels increased non-significantly in the period from 1983 to 2003 in seabird eggs. Significantly higher concentrations were seen in herring- and glaucous gull species compared to the other species. The eggs from these two species had PBDE concentrations that were twice as high as compared to eggs from kittiwake and puffin. The levels of PBDEs in seabirds constitute about 2-5 % of the total organic pollution in the seabirds. The temporal leveling out and decrease seen in PBDEs is due to reduced production and usage due to ban and regulation of the three mixtures of PDBEs (the penta-BDE, octa-BDE and deca-BDE).

Levels of ΣPBDE in seabird egg