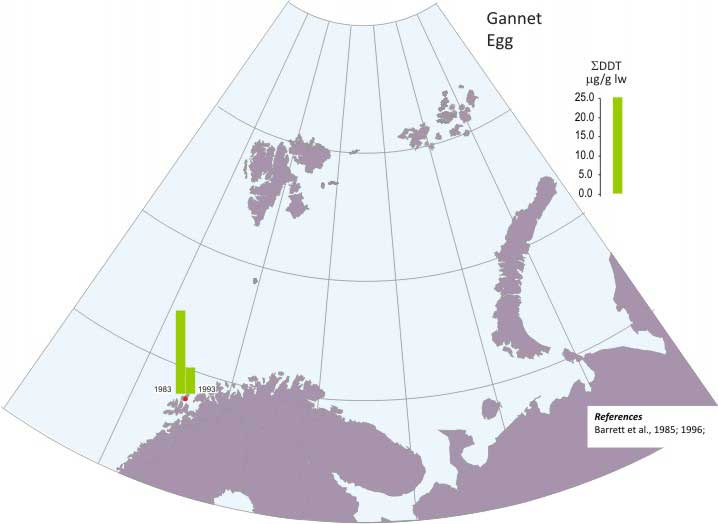 Perfluorinated compounds (PFCs) refer to a class of organofluorine compounds that have all hydrogens replaced with fluorine on a carbon chain—but also contain at least one different atom or functional group.

They are widely used, as their unique properties make them suitable for staining and to make materials oil- and water-resistant. PFCs persist in the environment, but unlike PCBs, they are not known to degrade by any natural processes due to the strength of the carbon–fluorine bond. In adult laboratory animals PFC caused toxicity to the liver and decreased viability and survival in newborn mice and rats.

PFC can also cause developmental malformations and affect thyroid hormones.

A strong increase (doubling) of PFS and PFCA were observed in the period from 1983 to 1993. In the period from 1993 to 2003 were the level of PFS and PFCA stable. PFS and PFCA are only available for herring gull eggs and there is no difference between the two sampling areas. The PFC concentrations in seabird eggs from the Barents Sea area is however much lower (about 10%) than in seabird eggs from more populated areas as the Baltic and Great Lake System in US.

Levels of ΣPFS in seabird egg