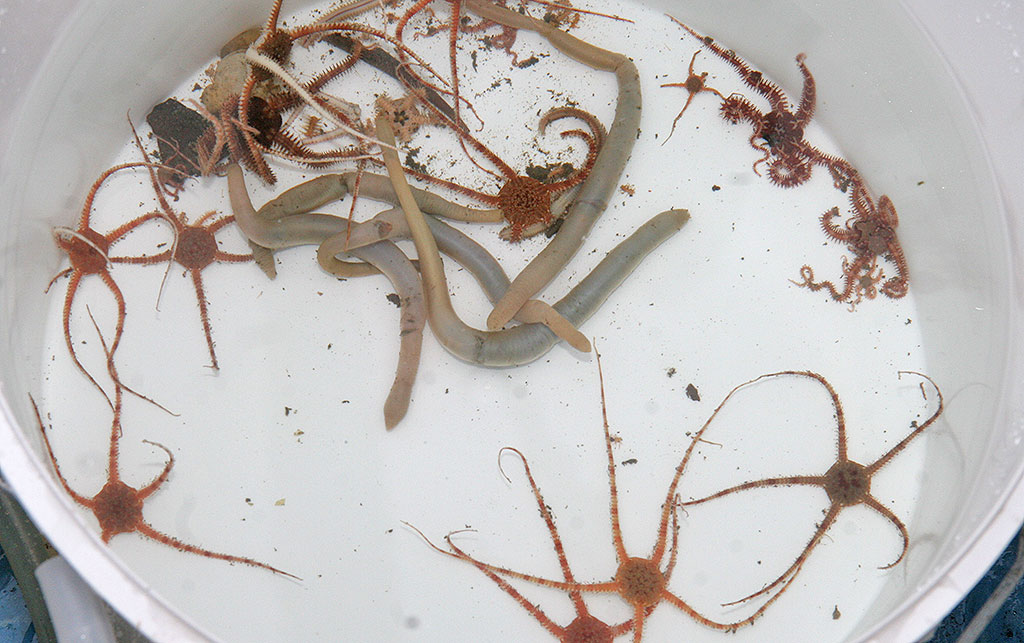 Biotopes are characteristic combinations of species and environment, and are one component of seabed habitat mapping. Biological sampling stations across the Barents Sea have been surveyed annually by IMR and PINRO on the joint Norwegian-Russian Ecosystem Survey. Benthic fauna biomass data from bottom-trawl samples were arranged into faunal groups and a set of these groups was used as the basis for the biotope classes used here in predictive modelling. The relationship of these biotope classes to the physical environment was analysed and selected full coverage physical data (sediment grain size, bathymetry and oceanographic parameters) were used to create a model and to predict the distribution of biotopes across the entire study area. Further details on the modeling are available here (technical summary).

The benthos faunal groups and the oceanographic data used in biotope modelling were provided by the Institute of Marine Research. Sediment data that were used for modeling are from the earlier map product of the Norwegian-Russian Workplan (Seabed Sediments of the Barents Sea). The Norwegian Hydrographic Service has provided access to the bathymetric data from IBCAO

The biotope map can be freely used for noncommercial purposes under the condition that the bibliographic reference is given: Dolan, M.F.J., Jørgensen, L.L., Lien, V.S., Ljubin, P., , Lepland, A. 2015: Biotopes of the Barents Sea. Scale 1:3 000 000. Geological Survey of Norway (Trondheim), Institute of the Marine Research (Bergen) and Polar Research Institute of Marine Fisheries and Oceanography (Murmansk).