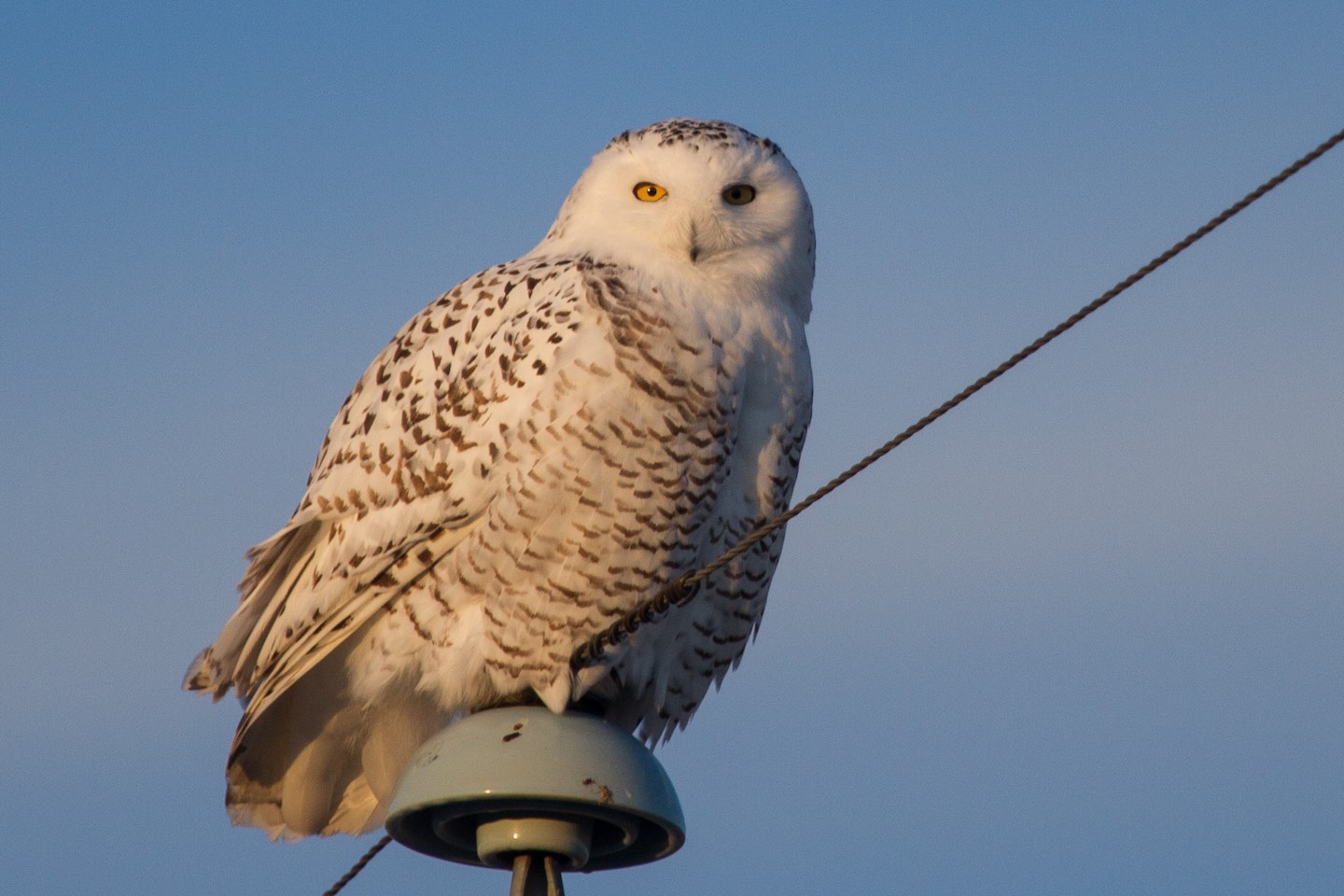 The Snowy Owl is a large (53-76 cm), hvite owl with a wingspan up to 1,83 meter. The females are approx. 22% larger than the males. The weight of the males and females are in average 1,6 kg and 2,1 kg, respectively (Potapov & Sale 2012). Older males can have a totally white plumage, while the females normally have more dark spots. However, there is a big individual variation and often you will need to hold the bird in your hand to be sure of sex and age

(Bortolotti et al. 2011). Exceptions are when you can see both sexes side by side, or see the moult patterns of primary and secondary flight feathers on birds with age up to five calendar years (5C) (Solheim 2012). The snowies can become either paler or darker as they grow older, or have a constant pattern. In addition, the feathers are bleaching a lot in the spring. The juveniles are mainly darker and have more small spots than the females. It is normally easy to determine the sex near the breeding ground because of size, plumage and behavior. The flight of a Snowy Owl is powerful, and the long wingspan can remind you of a gull or a buzzard.

The Snowy Owl has a circumpolar distribution. The breeding areas are mainly located on tundra and mountain plateaus in Fennoscandia, Russia, Alaska, Canada and Greenland. They also breed irregularly on Iceland (1-2 pair). In the European part of Russia they breed in the southern part of Novaja Semlja, Vaygach, Yugorskiy Peninsula, eastern part of Bolsheze­melskaya Tundra and the northern part of Kanin­ Peninsula. In Norway the Snowy Owls have mainly been breeding irregularly in the three northernmost counties (Finnmark, Troms & Nordland) the last decades. Until the 1970’s they also used to breed in Southern Norway, were the most famous site was at Hardangervidda mountain plateau. In Sweden they breed irregularly in the mountains south to Jämtland county, while in Finland they breed irregularly in two distinct areas in the north (Jacobsen 2005, Jacobsen et al. 2014).

The Snowy Owls primary summer habitat is open tundra. If food is available, it is equally at home on polygonal tundra where nests are placed on raised polygon borders or on gentle slopes with tussock tundra. In valleys they occupy river banks or high terraces near streams or lakes. In hilly country, the bird avoids very steep slopes and cliffs, preferring flat hill tops or gentle hillsides, places which allow it a good view of its surroundings (Potapov & Sale 2012). In Norway and Sweden they might breed up to as high as 1000-1500 meter above sea level, although breeding in lower elevation is more normal (Hagen 1952, Haftorn 1971, Bannermann 1957, Watson 1957, Cramp 1985). In the breeding season rodents are very important prey. But to survive in the arctic during the winter, the owls have to eat what is available. They hunt many different prey and might kill up to the size of Capercaille, Herring Gull or Mountain Hare. Even though the winterdiet is not fully known, grouse (Lagopus spp) seems to be an important prey item if rodents are absent. It is also known that Snowy Owls can hunt for seabirds in polynyas (open ice; Therrien et al. 2011). However, many of the Snowy Owls are migrating to the south in the winter. This might be to bush-tundra in Russia or the steppes in Kazakhstan (Dementiev & Gladkov 1951; Portenko 1972), or to the northern praire areas (Northern Great Plains) in North-America (Kerlinger et al. 1985). They are also wintering in other types of open landscape, like coast/islands, salt meadows, larger rivers or lakes, farmlands, heathland or bog. They are often seen close to human settlements, and like to sit on different constuctions (buidings, poles or fences (Nagell & Frycklund 1965; Cramp 1985; Parmelee 1992). Snowy Owls seem to avoid forest, but can be found in the border zone (Glutz & Bauer 1980).

The nest is a very simple scrape made in peat or sandy soil. The size is 25-30 cm in diameter and 5-9 cm deep. The egglaying can start in the beginning of May, but this vary with both geography and phenology (Potapov & Sale 2012). The average clutch size is 7 eggs, and both available prey and time of egglaying are assumed to affect this (Potapov & Sale 2012; Menyushina 2007). The largest clutch size reported is 14 eggs (Wasenius 1930; Portenko 1972; Stishov et al. 1991). Egglaying interval are approximately two days (41-50 hours; Schaanning 1907; Robinson & Becker 1996). Sometimes the bird can increase the interval during the egglaying period, maybe because of the weather conditions (Parmelee et al. 1967, Tulloch 1968). The female starts to incubate when the first egg is laid, which results in difference in size of the owlets. Incubating time is 32-33 days, and it is only the female that incubates and broods the young (Watson 1957). After 2-3 weeks the owlets are dispersing from the nest (Parmelee et al. 1967), and they can fly after approx. 50 days (Watson 1957; Parmelee et al. 1967; Robinson & Becker 1986). Polygamy (one male and two females in two different nests) are known from several occations (see Parmelee 1992; Potapov & Sale 2012). If there is plenty of food the Snowy Owls can breed with quite a high density (1-3 km between nests; Hagen 1960; Parmelee 1992, own data). The owls can be aggressive to humans near the nest, but this varies a lot between individuals and time in the breeding cycle. The oldest known age of an wild Snowy Owl is min. 20,5 years (Jacobsen et al. 2014), while a captive bird was a least 28 years (Schenker 1978).

Rich et al. (2004) estimated the world population of Snowy owls to 290,000 individuals, but noted that the basis for this estimate had a high degree of uncertanties. According to IUCN’s global red-list (BirdLife International 2013) the species is categorized as LC- Least Concern, since the total population is estimated to be very large, and any population decrease has not been rapid enough to be placed in another category. In an attempt to produce a better world popu­lation estimate, Potapov & Sale (2012) introduced the so called Loose Boid approach. They believe that the spring/early summer world population is divided into 5-10 separate subpopulations/boids, where each consist of an estimate of 300-2,000 pairs. One of these boids is limited to the area Fennoscandia - Novaya Zemlya and Taimyr. This approach gives a maximum estimate for the world population of only 14.000 pairs, which is identical to the maximum population estimate based on DNA studies of Snowy Owls by Marthinsen et al. (2008). The world population may increase in years of good food availability, and subsequently decrease. These new estimates are bound to spark a discussion on the red-list status of the Snowy Owl, in the whole range of the species’ distribution range.

The main threats to the Snowy Owl population are considered to be decreasing populations of vital prey species, climatic changes, technical impacts and disturbance in core breeding and wintering localities, depredation and parasitism, human persecution (including bycatch in traps) and contamination. See the figure below for all the factors that are assumed to have affected the decrease in Fennoscandia the last 100 year (from Jacobsen et al. 2014).

The new estimates of a maximum of only 14000 pairs are bound to spark a discussion on the red-list status of the Snowy Owl, in the whole range of the species’ distribution range. Since Fennoscandia seems to share Snowy Owls with Russia, increased knowledge about the population status and threats in Russia are very important for the understanding of the factors that influence Snowy Owls’ appearance in Fennoscandia. It is crucial to protect the core breeding- and winter localities from human impact. And it is also important that the owls are subject to sufficient protection against human disturbance and persecution (Jacobsen et al. 2014).