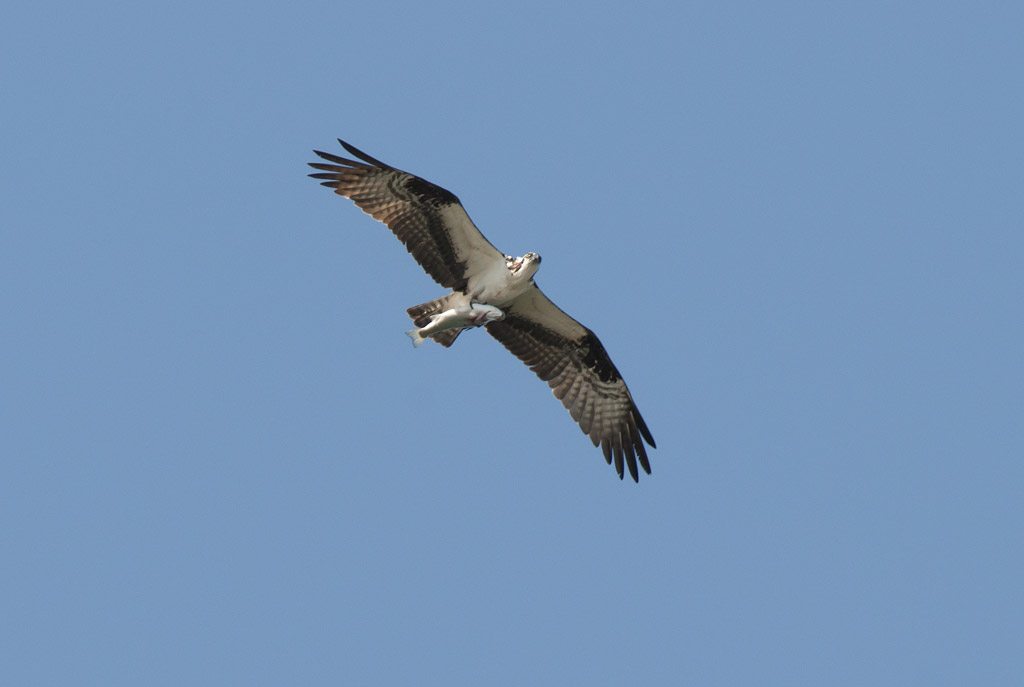 The Osprey is a large, eagle-sized raptor with long wings, but rather short tail. The body is 55–60 cm long, and the wingspan 146–173 cm, respectively. The weight ranges from 1.2 to 2.1 kg, female being 5–10% larger than male. Upperparts are dark brown, underbody and under wing-coverts white. There is a band of buff streaks across the upper breast. Head is white with speckled crown and a black stripe through eye. Sexes are similar. Juveniles have

creamy-white feather edges on their back. In the sky the Osprey soars long periods on wings held in positions recalling large gulls.

The breeding range of the Osprey includes the whole of Sweden and Finland. In Norway the Osprey breeds in a uniform area in the southeast, and locally in some regions up to Finnmark. In the Russian side of the Barents region, the Osprey breeds within the coniferous forests from Karelia and southern parts of the Kola Peninsula eastwards (Cramp 1980, Hagemeijer & Ward 1997). Globally the Osprey is a cosmopolic species with a wide Holarctic range, and sporadic distribution in Africa, Asia and Australia–Oceania (the global range exceeds 31 million km2). The populations breeding in the Barents region winter in western Africa.

The major habitat requirements of the Osprey include clear, unpolluted water-bodies, whether fresh, salt or brackish, for fishing, and a steady tree-top for nest-building. Most productive fishing sites include shallow, calm waters with dense fish populations. The nesting habitat varies considerably from shores and peatlands to various forest types. Most common nest-sites include pine peat bogs, fragmented pine forests, hill and ridge tops, where the birds can find an exposed pine tree, more seldom spruce, somewhat higher than other trees in the neighbourhood. In South Finland, where the great majority of forests are young and even-aged, and peatlands drained due to effective forestry, about 90% of the pairs nest in artificial nests, a smaller percentage in other areas in the Barents region. Due to long-lasting persecution up to the mid-1900s Ospreys nest in undisturbed areas further away from habitation, major roads and other areas with intensive human activity.

Ospreys are long-lived (may live up to ca. 30 years) and slowly-reproducing birds of prey. They nest in a traditional nest-site for decades, generation after generation, if it remains in good condition and undisturbed by humans or construction of houses, roads etc. The adults remain faithful for their common nest-site, and therefore same individuals nest together year after year until one or the other of them dies. The Ospreys become mature when three years old but a good number of them do not start nesting until four or firve years old. Almost all populations in the Northern Hemisphere are migratory and winter in Africa, leaving the Barents region mainly in late August and September and arriving in late April and early May in spring. Typically pairs breed some five to ten kilometres, in optimal sites only 2–3 kilometres from each other. Average prey includes the most common local fish species, weighing usually 300–1.000 gr. The female remains in the nest throughout the nesting season, being responsible for the incubation and caring of the young, while the male flies up to 5–7 times a day for fishing for the whole family, sometimes up to 20–30 kilometres from the nest. The most common clutch size is three sometimes two, exceptionally four. The main laying period in the Barents region lasts from the beginning of May in the south to late May in Lapland and Kola Peninsula. The female incubates 37–39 days. The young fledge at the age of 50–55 days, but they are fed, the last weeks only by the male, until becoming independent 30–60 days later.

The global population of the Osprey has been roughly estimated at 500.000 individuals (BirdLife International 2015). The breeding population in Western Palearctic (Europe, northern Africa, and the Middle East) was estimated recently at 9.500–11.500 pairs, including the following national estimates in the Barents countries: Norway 500 breeding pairs, Sweden 4.100 pairs, Finland 1.300 pairs, and European Russia 2.000–4.000 pairs (Schmidt-Rothmund et al. 2014), of which about 35 pairs in the Kandalaksha area and the Kola Peninsula, and 150 pairs in Karelia, respectively, in the 1990s (Saurola et al. 1998). The national populations have increased in recent decades in all Barents countries, and the whole population in the Western Palearctic has almost doubled since the 1980s (Schmidt-Rothmund et al. 2014, Saurola et al. 1998). At the same time, the European breeding range has expanded, and the species has recovered in many countries and regions from where it went extinct in the late 1800s and early 1900s due to persecution and habitat destruction.

Intensive forestry and especially felling of the oldest and tallest pine trees due to modern forestry is the most important threat of the Osprey populations especially in southern and central Scandinavia and Finland. In the north, there are more suitable trees with steady tree tops available, but the waters are mostly oligothrophic, deep and with small fish populations and, thus, not as suitable for fishing as those in the south. In addition to cutting of suitable nest-trees in coniferous forests, modern forestry has destroyed hundreds of formerly used nest-sites in pine peat bogs in Finland and Sweden by draining. Building of summer-cottages and other recreational activities along lake shores and shallow sea-bays have prevented Ospreys from breeding close to water and fishing sites as they did originally, before the persecution especially in the late 1800s and early 1900s made the birds shy. Persecution of the Osprey is nowadays exceptional in the Barents region, but unintentional disturbance due to forestry, construction of houses and roads, and recreational activities destroy a good number of nestings each year. Shooting of migrants in the Mediterranean countries and especially in Malta continues, however, but it has a minor effect on the European population. In the mid-20th century many populations both in Europe and North America suffered from DDT and other chemical pesticides but their amounts in food webs have lowered, and the threat caused by them is of minor importance nowadays. Instead, building of wind-power mills is a growing threat.

The Osprey is classified as least concern (LC) both globally and in Europe (BirdLife International 2015), as well as in Sweden (Sandström et al. 2015). Both in Norway and Finland the Osprey belongs to Near Threatened (NT) species (Kålås et al. 2010, Rassi et al. 2010). In Russia, the Osprey is classified as Vulnerable (VU) in Murmansk region, Rare (R) in Karelia (Kotiranta et al. 1998), and Near Threatened (NT) in Leningrad Oblast (Noskov 2002). Building of artificial nests is the most effective and widely-used conservation measure of the Osprey populations in Barents region. Conservation of suitable hunting waters and fish populations is also of utmost importance for this raptor totally dependent on fish for prey.