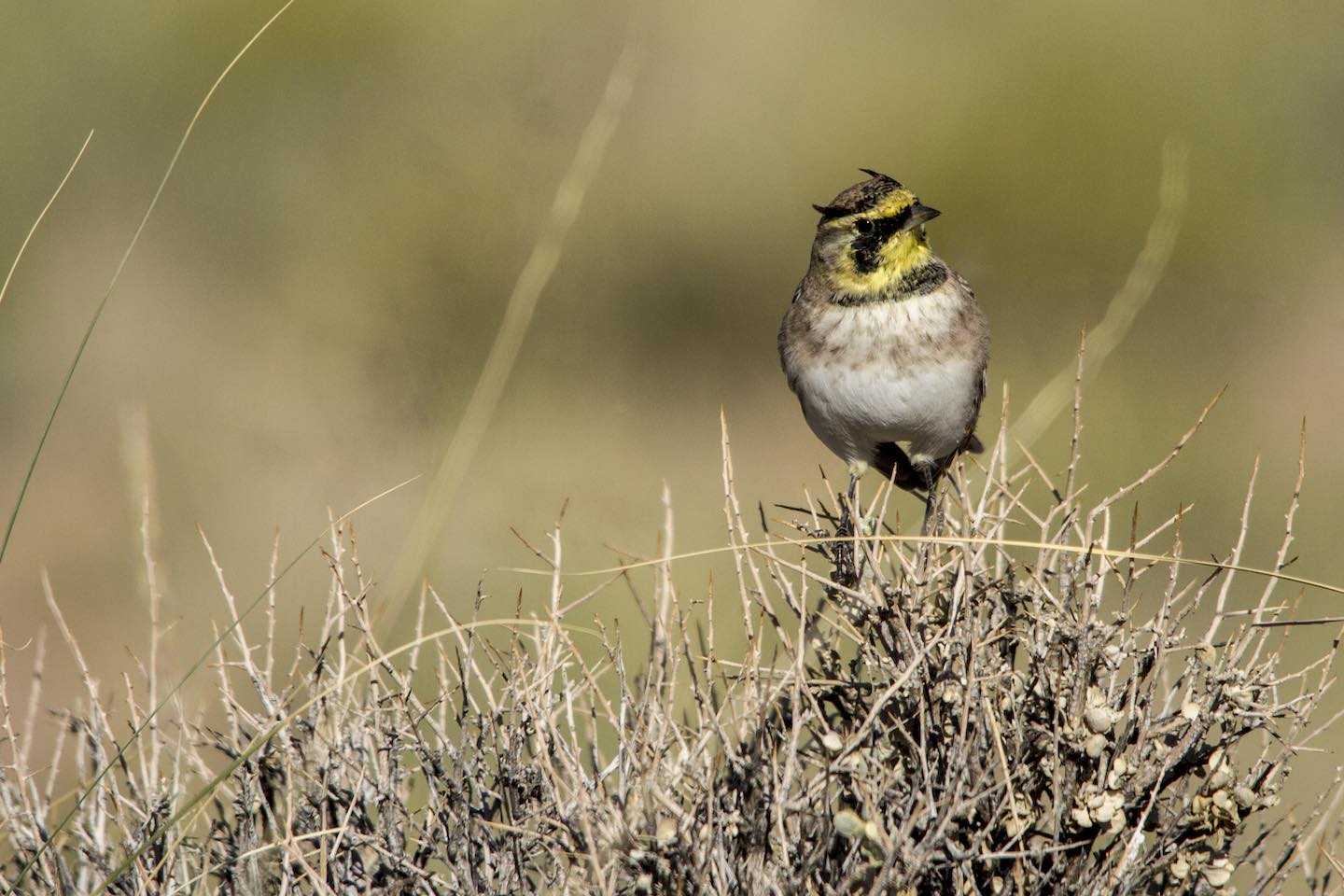 The bird is somewhat larger than a sparrow. On the head, elongated feathers are shaped into the “horns”. From the distance, the overall color appears as pinkish gray, with contrasting black spots on yellow head and on the front of the neck. Females have duller coloration and shorter "horns". The tail is relatively long and almost black.

The species displays wide but uneven distribution. They are present in North America and in the mountains of the Northern Africa. In Eurasia, distribution is spotty: tundra and mountain tundra of taiga areas; mountain ranges, from the Balkans to the Khingan; steppe areas from the east of the Volga to beyond Baikal. In Scandinavian countries and the Murmansk region they inhabit mountain tundra and tundra plains along the coast of the Barents Sea and the northern part of the Tersk shore of the White Sea.

Preferred habitat are dry sandy or gravelly slopes and elevations in the plains and mountain tundra, open dry areas.

The species arrive from the wintering grounds up north in late April - early May, once there are thawed areas on the ground. The male usually sings from the ground, while sitting on hillock or mound, but sometimes sings in the air. Nests are built on the ground, from dry grass, lined with the plants or animal fur. There are 3 - 5 eggs in a clutch, pale green, densely covered with brown and pale grayish streaks. The chicks leave the nest in late June - early July at the age of 8 - 9 days, still unable to fly. Parents continue to feed them for some time after that. There is rarely a second clutch. During summer, larks eat a variety of small mollusks and crustaceans, in autumn and winter - seeds of cereals and other herbaceous plants. At the end of September-October, they migrate for the winter to Central Europe and around the Black sea.

Data on abundance of horned lark are insufficient. At the end of the 19th and early 20th centuries the species was considered as common and huge flocks were observed during the autumn migration. Since the mid-twentieth century, horned lark is seen less often, their abundance is very uneven. Until the mid-1970s, this species was commonly observed during its migration in Karelia, but since 1980 – it has become very rare and is not registered every year. A similar pattern is observed throughout Fennoscandia, except for the south of Norway. In Finland 1-10 pairs breeds annualy.

Presumably, the birds are affected by the situation in other countries, where they spend the winter (use of pesticides in agriculture lands, the disappearance of suitable habitats, climate change, fishing and hunting).

Reduced breeding range and declining numbers have been observed. Population status requires specialized research and identification of the causes of the decline.