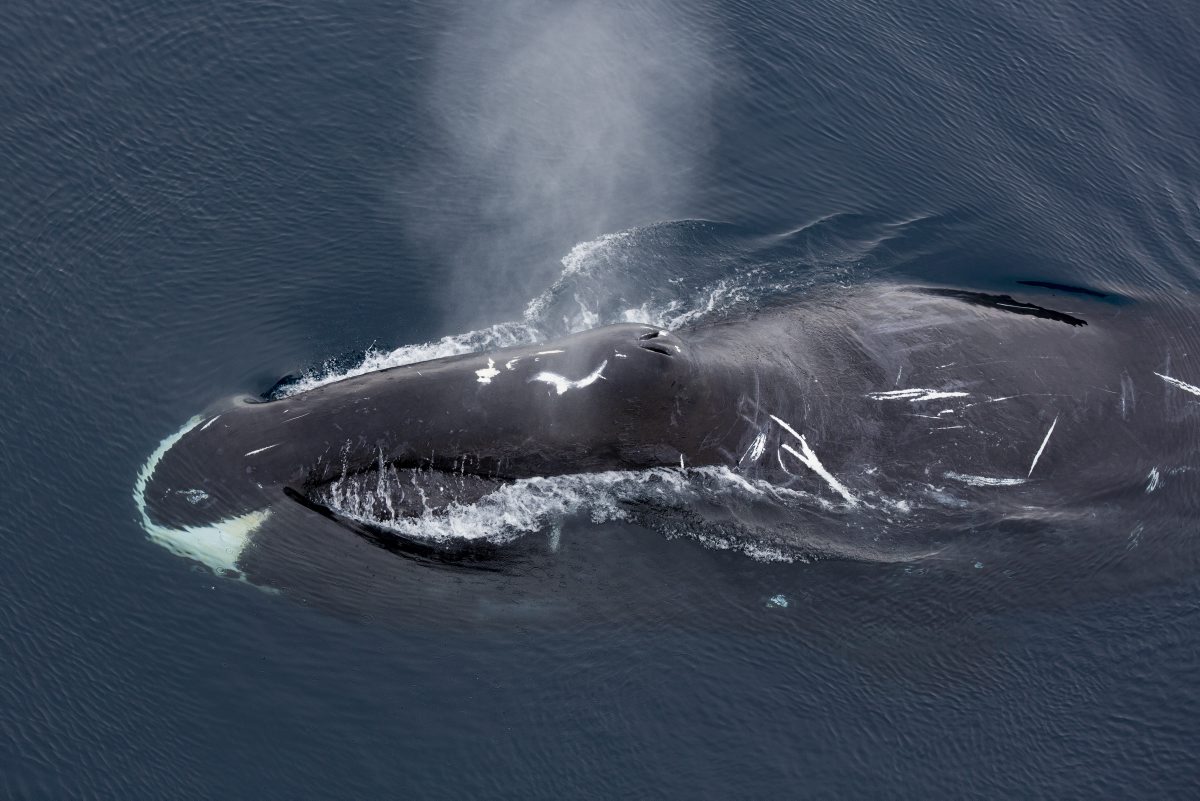 Bowheads are large baleen (mysticete) whales. They weight 75–100 tons with females being slightly larger than males, with corresponding lengths of 16–18 and 14–17 m. They are short and broad like all right whales. They are dark grey on the back and lighter on the belly. Bowheads have elevated nostrils and no dorsal fin, that is thought to be adaptations to living in ice. Their blow is V-shaped. Baleens are extremely long, up to 4–5 m, and the bowed

appearance of their mouth gives them their name. Bowheads are very slow swimmer compared to the more stream-lined baleen whales.

The bowhead is the only full-time arctic resident among the baleen whales. It has a patchy circumpolar distribution governed by the heavy ice conditions that have prevailed over the last millennium in the Arctic Basin and have impeded their movement in the Northwest and Northeast Passages (Alter et al. 2012, Borge et al. 2007).

Spitsbergen subpopulation is one of the five subpopulations (stocks) of bowheads defined in the Arctic. It is confined to the Northeast Atlantic from the Greenland Sea eastward to the Franz-Josef Land area and northernmost portion of the Kara Sea (Reevs et al. 2013).

Bowheads live in close association with sea ice on all year round. They usually remain close to the southern edge of winter ice and disperse in pack ice areas during other seasons. In Franz-Josef Land bowheads are observed in flow polynyas off archipelago and at the ice edge in April–May (Belikov et al. 2002, Gavrilo & Ershov 2010), whereas in summer they are distributed wider: from the pack ice edge north of archipelago to the ice free areas south of the islands. Recent observations revealed feeding concentrations on shallow bank along the southern islands and in deep straits open to the Arctic Basin (Gavrilo 2014 in press).

Bowhead whales are exceptionally long lived animals with slow growth, delayed maturity and low reproductive rate. They believed to live up to 200 years, but reach their final body size at 40–50 years. They start breeding after 25 years old.

Bowheads are well adapted to living in the Arctic. They have thickest blubber layer (up to 50 cm), and a complex blood circulatory mechanisms for conserving heat. Bowheads are the only baleen whale that calves in arctic waters. They mate and calve in spring and spend the summer feeding and raising their young. Gestation lasts 13–14 months, and a single calf is born. Calves remain with their mothers during the summer and subsequent autumn and probably winter. Inter-calving interval is ca. 4 years.

Bowheads are migratory throughout their range, but in the Barents Sea region their movements seem to be of a smaller scale than in Pacific rhyme. Bowheads are “loosely social” and travel mostly in small groups. They winter south of the pack ice and spread north- and eastwards following retreating ice. A tendency of northward shift in summer distribution is observed in the western part of the area (Gilg & Born 2005), but occasionally animals are observed up to 200 km south of ice-filled waters in late summer (Decker et al., 1998). It is assumed that population is partly resident in Franz-Josef Land where it can winter in polynyas (de Korte & Belikov 1995, Gavrilo & Ershov 2010).

Bowheads feed mainly on small (3–30 mm) planktonic crustaceans, including copepods and euphausiids, although they can also take small schooling fishes such as polar cod. They feed throughout the water column, sometimes near the bottom, of skimming the surface. Bowheads are assumed to obtain most of the food necessary for annual growth and maintenance, during the summer, although some feeding can take place outside summer grounds.

Global population numbers is over 15,000 individuals with overwhelming majority belonging to the Alaskan stock (10,000), and in the Eastern Canadian Arctic and West Greenland stock (5,000). Spitsbergen-Barents Sea subpopulation is much smaller, consists of tens or some first hundreds of animals, but no reliable estimate exists. Previous estimation of the Spitsbergen stock was as small as several tens or a hundred of animals only (Christensen et al., 1992, Zeh et al. 1993, Covacs et al. 2009). Recent regular observations of bowheads in Franz-Josef Land suggest that the population is bigger, but no reliable data exist to ground new population estimate. Here, up to 30–40 animals could be sighted during a month cruise in summer season (Gavrilo 2014 in press). In Svalbard, sightings of this species are still very rare. While the number of sightings records has increased over time this may reflect increased effort rather than increasing abundance. Thus, the population trend remains unknown (IUCN 2012).

Unsustainable whaling used to be the major anthropogenic threat for bowheads. This species was the first of the great whales to be severely depleted by commercial whalers. During intensive hunting in 17th–19th centuries, bowheads were driven to near extinction throughout their range, and Spitsbergen stock was considered exterminated.

Nowadays, bowheads in Northeast Atlantic are fully protected from hunting, and the most important human threats relate to exploration of Arctic shelf, including development of petroleum resources and shipping (Reevs et al. 2013). The major factors that could affect bowhead whales are underwater noise and oil spills. Studies in Pacific sector showed bowheads to exhibit avoidance responses to ship, seismic, and other noise at low (received) levels at distances of 30–50 km in autumn. They tend to tolerate higher noise levels when feeding, but may show subtle changes in diving, swimming, and acoustic behaviour (Blackwell et al. 2013, McDonald et al. 2012, Richardson et al. 1999). Having long, finely fringed baleen, the bowheads are particularly vulnerable to oil spills because their ability to feed efficiently would be impaired if the baleen were fouled by oil. Possible oil ingestion, directly or indirectly through affected prey, is also of concern.

Risks of impacts from petroleum industry is alarming with respect to existing overlap of oil licence in the Russian northern Barents Sea with most important summer feeding grounds of Spitsbergen subpopulation.

Better survey of the subpopulation distribution and numbers is urged. Strict regulation and control of industrial activity in the northern Barents Sea is required with special emphasis to seismic surveys and other activities with underwater noise release.