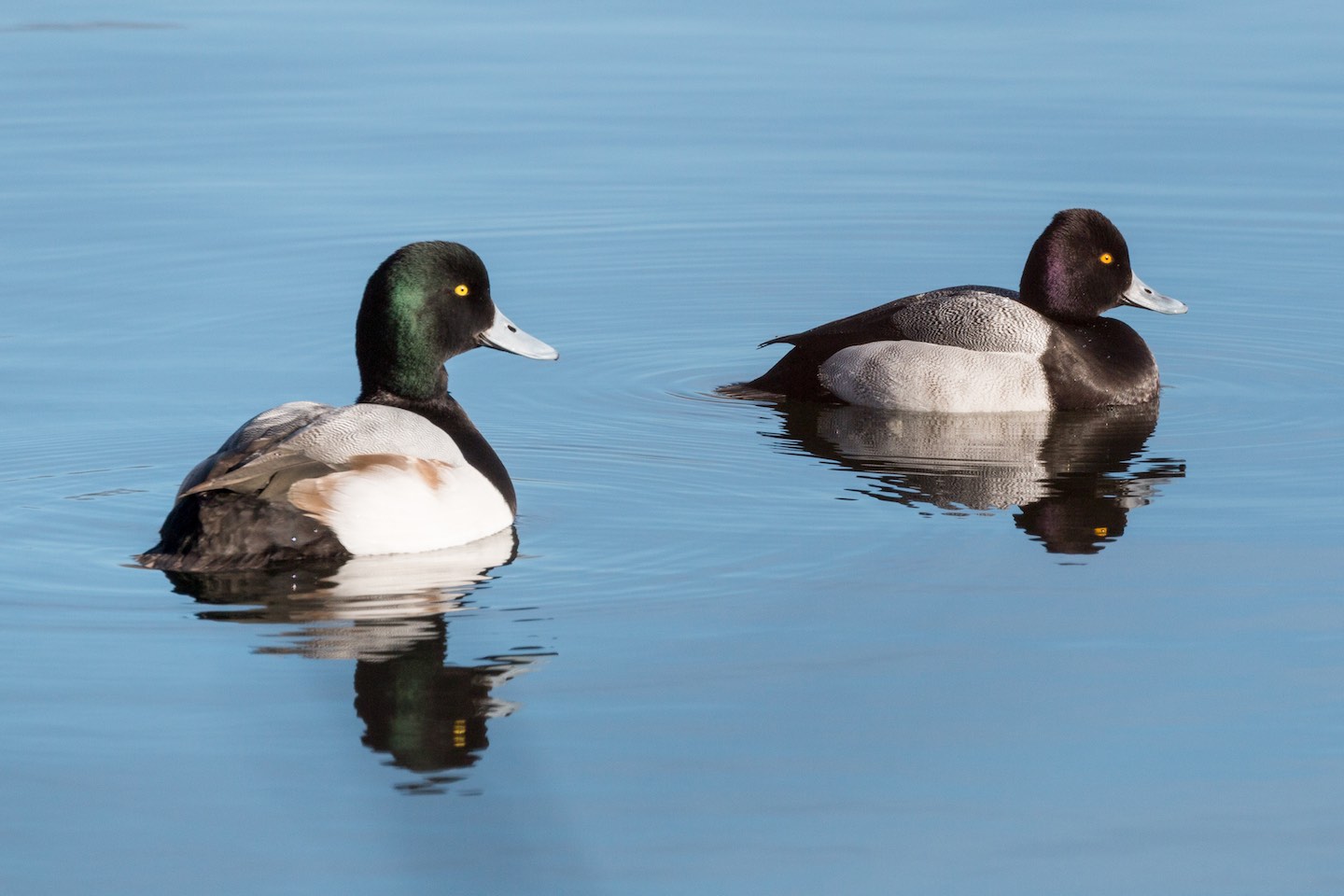 A medium sized diving duck (length 40-51 cm, weight 700-1372 g, wingspan 72-84 cm); slightly larger and more compact than Tufted Duck. Head shape rounder. Sexually dimorphic. Male in breeding plumage has a dark (green or purple) glossy head and neck, with a bright yellow eye. Breast and vent are dark black. Belly and flanks are white. Back is pale grey. Eclipse male is similar, but the black parts are browner and the white flanks are brown-streaked.

Adult female and juvenile are mainly brown, paler on flanks and back. White belly is shown in flight. Characteristic white patch at the base of bill.

Wide, circumpolar distribution. Two subspecies recognized: A. m. marila is breeding in northern Eurasia from Iceland eastwards through Fennoscandia to the Lena River in Siberia. Winters mainly in NW Europe and around the Adriatic, Black and Caspian Seas. A. m. nearctica is breeding in NE Siberia from the Lena River eastwards to the Bering Sea, through Alaska and Canada to the Atlantic coast (Carboneras & Kirvan 2014).

Breeds sparsely in mountain areas throughout Norway, rarer in the north (Bakken et al 2003). It also breeds on lakes in the Swedish mountains, and along the coast of the Gulf of Bothnia (Ottosson et al 2012). In Finland, the species breeds mainly along the Baltic coast; the northernmost Lapland holds only about 50 pairs. (HELCOM 2013).

Most of the European population winters in the Wadden Sea (Haldin 1997).

Breeds in open tundra or forest tundra; mainly on shallow, small lakes, rivers and pools at high latitudes, with grassy shorelines and high densities of aquatic invertebrates. Shows a preference for water less than 6 m deep (usually 2 m) for diving.

In Fennoscandia it breeds in two rather different habitats: on mountain lakes in upland birch region, and on small islands and skerries in the outer archipelago of the Baltic Sea (Natura 2000 2009).

Generally a migratory species, but some birds remain in Iceland during winter. Birds breeding in S Scandinavia may move locally to nearby coasts. Males tend to remain much further north than females and immatures (Carboneras & Kirvan 2014). In Norway autumn migration takes place in September- November; spring migration in late April – early May (Jacobsen & Ugelvik 1994).

Seasonally monogamous. Pairs are formed in late winter or early spring. Breeding starts in late May or early June, as soon as the breeding sites are available and free from ice. Breeds in single pairs or loose groups, sometimes among gulls and terns. Neighbouring nests sometimes as close as 1 m. The nest is a shallow depression on the ground, close to water; either in thick vegetation or between rocks. Clutch is 8-11 eggs, incubation takes 26-28 days (by female only), hatching occurs in mid-July. In Finland, hatching success averaged 77% over three-year period, but just 6.5% of young fledged, albeit with high variation between years (Carboneras & Kirvan 2014).

Males usually desert females during incubation, and leave for the moulting areas. Females usually moult on the breeding grounds. During moulting the birds are not able to fly for a period of 3-4 weeks.

The Greater Scaup underwent a significant population increase in North America between 1974 and 2011 (Birdlife International 2015). However, the breeding population in Europe (except Iceland) underwent a large decline during 1970–2000. Between 1990 and 2000, also the key winter populations in Europe underwent a very large decline (>50%), and the species is now evaluated as “endangered” (European Commission 2009).

The population of the Swedish mountains has probably been stable since the 1970s, but the overall Swedish population has declined by at least 10% during the last 20 years. The species is now totally extinct in the Stockholm archipelago (Ottosson et al 2012, HELCOM 2013). The recent decline of the Finnish population has been estimated at 47% in 10 years (HELCOM 2013).

The reasons behind the declining breeding population in Fennoscandia are not known.

However, the species is generally susceptible to oil pollution during winter when it forms large, dense flocks, sometimes of ten thousands of birds. Reduced breeding populations in parts of Russia are thought to be due to factors associated with oil and gas exploration including habitat modification, pollution and an increase in hunting activity (Mineyev 1998). The Greater Scaup may also be threatened by high levels of organochloride contaminants and other pollution types (BirdLife International 2012).

Over-harvesting of mussels and cockles in the Dutch Wadden Sea has been shown to have a dramatic impact on the distribution of Common Eider, and may also lead to degradation of feeding opportunities for Greater Scaup (Natura 2000 2009).

Large numbers often drown due to entanglement in fishing nets. By-catch is judged to be an important problem for wintering Greater Scaup off the coasts of Latvia, Lithuania, Poland, Germany and the Netherlands (Natura 2000 2009).

Another possibility is hunting. The species is hunted legally for sport in some European countries (e.g. Denmark), but the reported bag figures are quite small (Natura 2000 2009). Although the number of hunted birds is small, the effect on small breeding populations with differing winter habits might be considerable (BirdLife International 2012, Haldin 1997).

Other potential threats to the species may be offshore extraction of sand and gravel, recreational boating, poorly located offshore windfarms, avian influenza and man-induced predations, e.g. by American Mink (Natura 2000 2009).

The plan outlined management prescriptions that aimed to reverse the negative trend. It was aimed at all EU member states with breeding, staging or wintering populations of Greater Scaup.