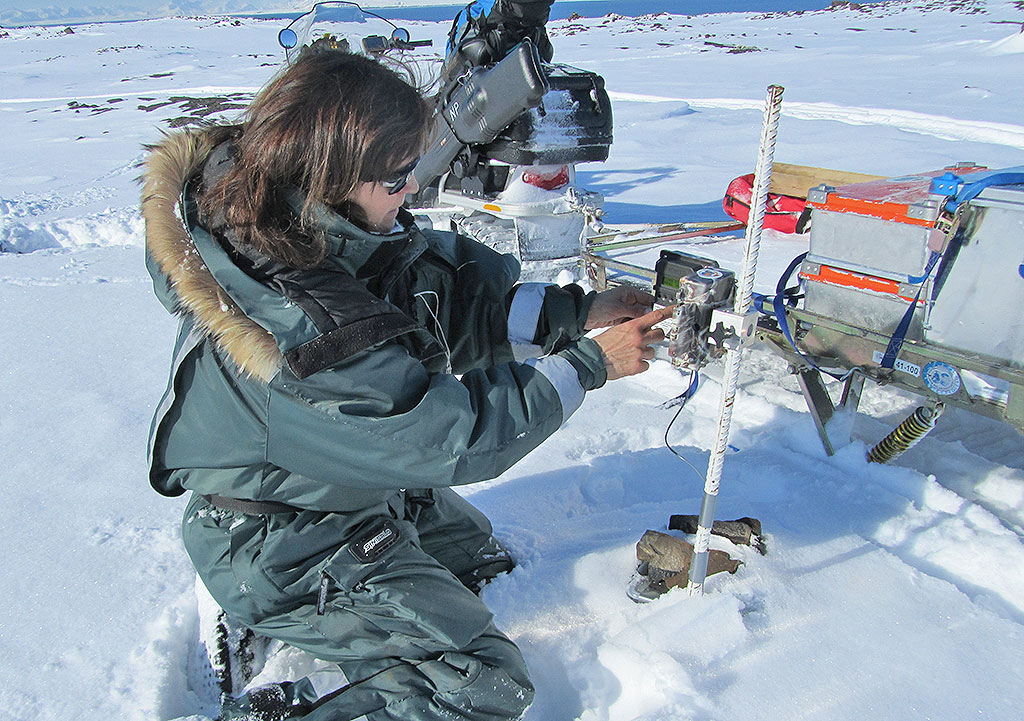 Current monitoring of the Barents Sea

Data from standard transects constitute a long marine time series dating back more than 100 years. At the beginning of the 20th century  monitoring — of temperature, salinity, nutrients, and chlorophyll a — was initiated in the Kola Section of the Barents Sea (Knipovich 1906), and by the 1930s, a network of such transects had been developed in this section (Figure 3.2.1). During the last decades, zooplankton has also been sampled.

An overview of the sampling time period, observation frequency, and measured variables for the standard transects is given in Table 3.2.1. Specific considerations for the most important sections are given in the following text. 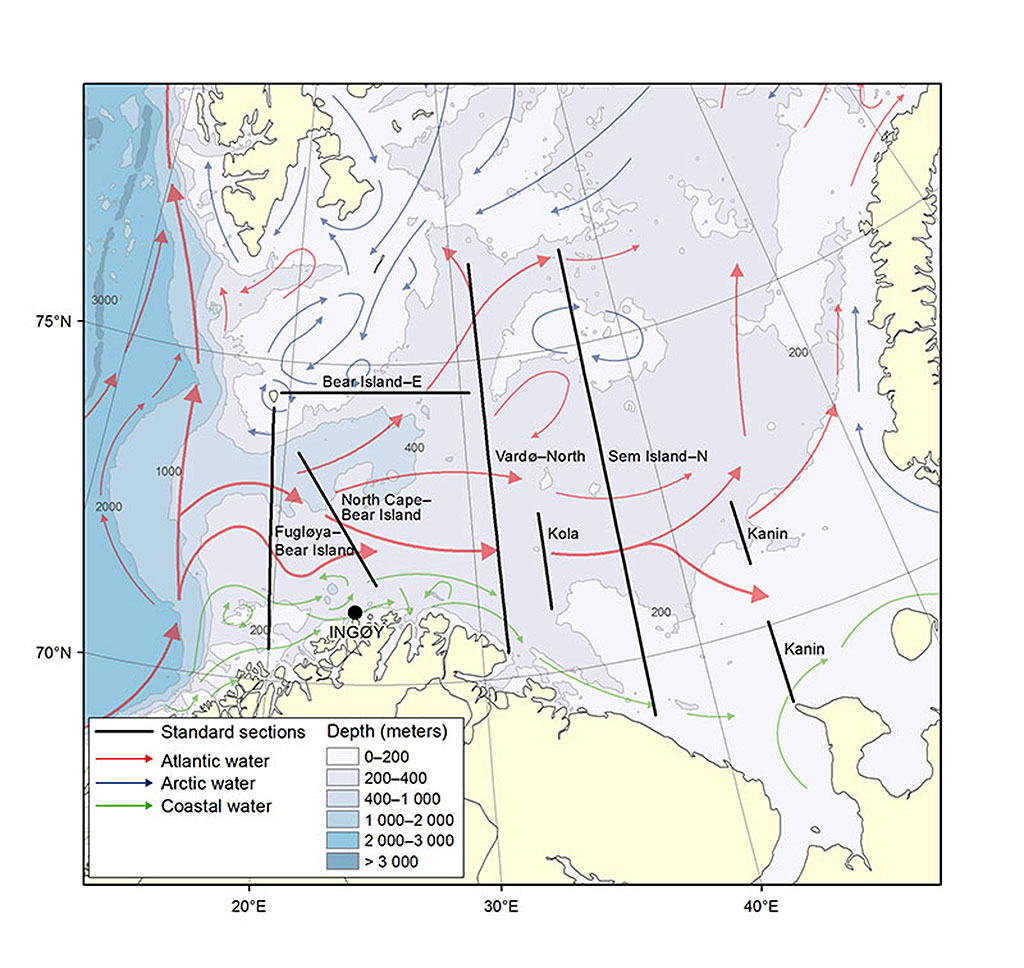 Figure 3.2.1. Positions of the standard sections monitored in the Barents Sea. A  is fixed station Ingøy, B is Fugløya-BearIsland, C is North cape-Bear Island, D is Vardø-North, E is Kola, F is Sem Island-North G  is Kanin section and H is Bear Island-East section.

The Fugløya-Bear Island section is situated at the western entrance to the Barents Sea, where the inflow of Atlantic water from the Norwegian Sea takes place. This section is representative for the western part of the Barents Sea. It has been monitored regularly since August 1964, and observation frequency increased to 6 times per year in 1977. Zooplankton monitoring began in 1987, and monitoring of phytoplankton (algae) in 2005.

Monitoring of the North Cape-Bear Island section has been conducted since 1929, and crosses the main branch of the North Cape Current. In the 1960s, the section was sampled up to 26 times a year. In recent years it has been sampled on a quarterly basis.

The Vardø-N section has been monitored in August regularly since 1953, and sampling frequency increased to 4 times per year in 1977. Situated in the central Barents Sea, it is most representative for the Atlantic branch going into Hopen Trench, i.e. the central Barents Sea.  The northern part of the sections is usually in Arctic water masses. Zooplankton monitoring in this section began in 1994, and monitoring of phytoplankton (algae) from 2005.

The Kola section is situated partly in both coastal- and Atlantic water masses, and is the section that best represents the Atlantic branch going eastwards parallel to the coastline, i.e. the southern Barents Sea. Some gaps in data time series exist, but sampling in this section has generally been quite regular. Time series of quarterly temperature sampling data are available from 1900-present, and of monthly sampling from 1921-present.

Monitoring in the Kanin section has been conducted since 1936; it includes the Kanin Current and the main branch of the Murman Current, as well as the fresher waters of the White Sea Current, which flow into the Barents Sea from the opening of the White Sea. The section is now sampled 1-2 times a year.

Monitoring of the Sem Island section has been conducted intermittently since 1977. During the period 1977-1995, the section was sampled regularly 2 times a year. In later years it has been sampled only a few times, with the latest observations made in 2000.

Surveys are conducted throughout the year. The number of vessels deployed may differ between surveys and also from year to year. Most surveys are conducted using only one vessel. It is not possible to measure all ecosystem components during a single survey. Additionally, investigations must use time efficiently, and focus on a definite set of parameters/species to give a synoptic picture of ecosystem conditions. Therefore, some parameters measured may not receive optimal sampling coverage. As result, considerable uncertainty may be associated with information on the latter even though the information is valuable. An overview of measured parameters/species during major surveys is given in Table 3.2.2.

Table 3.2.2. Overview of monitoring surveys conducted by IMR and PINRO in the Barents Sea, with observed parameters and species.  Species in bold are target species. Abundance, biomass, and distribution for many species — zooplankton, mammals, and benthos — are investigated. The table indicates whether sampling is conducted or not. Parameters measured are: T-temperature, S-Salinity, N-nutrients, Chla-chlorophyll. 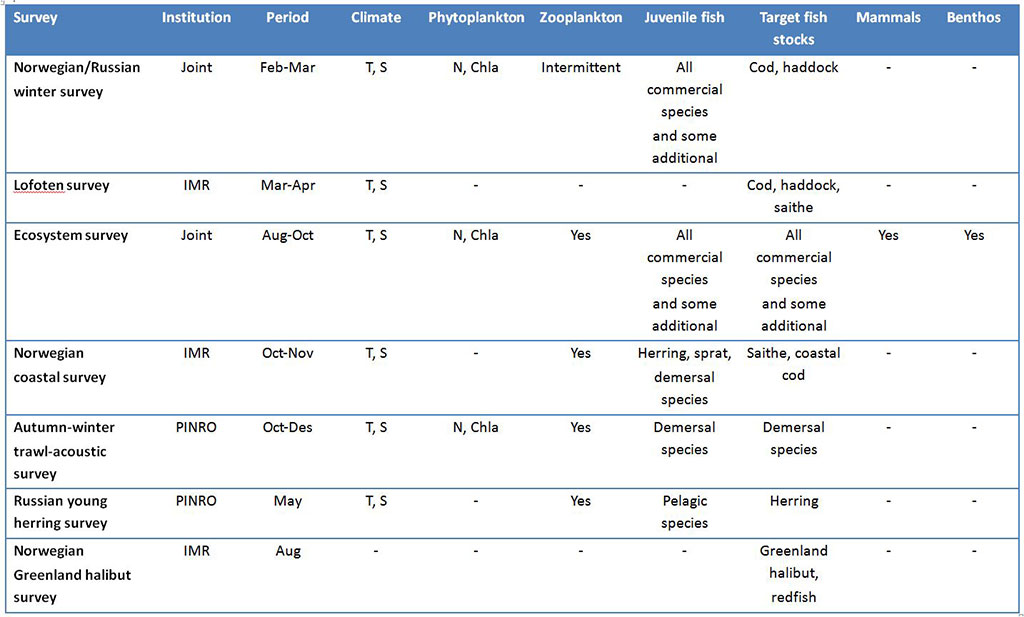 This survey is carried out during February-early March, and covers the main cod distribution areas in the Barents Sea. During some years coverage is limited by the ice distribution. Three vessels are normally deployed, two Norwegian and one Russian. The main observations are made with bottom trawl, pelagic trawl, echo sounder and CTD. Plankton studies have been done in some years.  Cod and haddock are the main species targeted in this survey. Swept area indices are calculated for cod, haddock, Greenland halibut, redfish (Sebastes Marinus) and deepwater redfish (S. Mentella). Acoustic observations are made for cod, haddock, capelin, redfish, polar cod, and herring. The survey was initiated in 1981.

The main spawning grounds for North East Arctic cod are in the Lofoten area. Echosounder equipment was first used in 1935 to detect concentrations of spawning cod, and the first attempt to map such concentrations was made in 1938 (Sund, 1938). Later investigations have provided valuable information on the migratory patterns, the geographical distribution and the age composition and abundance of the stock.

The time series of survey data extends from 1985 to present. Due to changes in echo sounder equipment in 1990, results obtained before 1985 are not directly comparable with later results. The survey is designed as equidistant parallel acoustic transects covering 3 strata (North, South, and Vestfjorden). In most surveys prior to 1990, transects were not parallel, but rather formed a zig-zag pattern across the spawning grounds to map cod distribution. For practical reasons, i.e., obstructions caused by fixed commercial fishing gear, trawl samples are not taken according to a stratified random survey design; rather, samples must be taken more opportunistically. Spawning concentrations can be located through echo sounding which effectively reduce the number of trawl stations needed. The ability to properly sample stock composition (age, sex, maturity, etc.) is limited by the amount of fixed commercial gear (gillnets and longlines) in different areas.

During 1985-2002, a Norwegian acoustic survey, specially designed for saithe, was conducted annually during October-November (Nedreaas, 1998). This survey covered  near coastal banks extending from Varangerfjord close to the Russian border southwards to 62°N.  The entire area has been covered since 1992, and major portions of the entire area since 1988.  This acoustic survey targeting Northeast Arctic saithe was conducted to provide fishery-independent data on the abundance of young saithe for stock assessment. The survey mainly covered grounds where the trawl fishery takes place, normally dominated by 3 - 5(6) year-old fish. Two-year-old saithe — mainly inhabiting the fjords and coastal areas — were also taken in the survey, but sampling was highly variable from year to year. During 1995-2002, a Norwegian acoustic survey — mainly for coastal cod — was conducted along coastal and fjord areas from Varanger to Stad. This survey took place in September, just prior to the saithe survey described above, and covered coastal areas not included in the regular saithe survey.  In autumn 2003, the saithe- and coastal cod surveys were combined; the survey design was improved and expanded to also cover 0-group herring in fjords north of Lofoten.

This survey is carried out each year during autumn (from early August to October), and covers the entire Barents Sea. Four to five vessels are normally deployed, three Norwegian and one or two Russian. Most components of the ecosystem are covered: physical and chemical oceanography; plankton; benthos; fish (both juvenile and adult stages); shellfish; marine mammals; and seabirds. A number of different sampling methods and gear types are used, including: water samples; plankton nets; pelagic and demersal trawls; grabs; and sledges; acoustics; and direct visual observations of birds and marine mammals. This survey has gradually evolved from joint surveys initiated in 1972 on 0 age-group capelin and Greenland halibut using general acoustic methods and samples to measure physical oceanography and plankton into the more comprehensive ecosystem survey carried out since 2003.  In association with this survey, Russia also covers parts of the Northern Kara Sea, and IMR covers the shelf east and north of Svalbard.

This survey is carried out during October-December, and covers the Barents Sea up to the continental slope. Two Russian vessels are usually deployed. The survey has developed from a young cod and haddock trawl survey initiated in 1946. The current trawl-acoustic time series of survey data begins in 1982, and includes both juvenile and adult stages of bottom fish species.  The survey also monitors physical oceanography, meso-zooplankton, and macro-zooplankton.

This survey is conducted over 2-3 weeks during May. It also monitors physical oceanography and plankton. During 1991-1995, it was a joint survey; since 1996, the survey has been carried out only by PINRO.

This survey is carried out during August, and cover the continental slope from 68 to 80ºN, at depths of 400–1500 meters north of 70º30’N, and 400–1000 meters south of this latitude. This survey was initiated in 1994, and is now part of the Norwegian Combined survey index for Greenland halibut. This survey was not conducted in 2010, and has been conducted biennially since 2011.

Large 3D hydrodynamic numeric models for the Barents Sea have been validated through observations, and have been useful for filling observation gaps in time and space. These models estimate temperature, salinity, ice, and circulation conditions in the ocean. The models have also proven useful for scenario testing, and to study drift patterns of various planktonic organisms. These models are developed and utilized at several Norwegian and Russian institutions, at different scales and resolutions.

Other ecosystem models are under development. These models will simulate the major ecosystem functioning and energy transfer in the food web. Models such as NORWECOM.E2E (Hjøllo et al., 2012) and Atlantis (Fulton et al., 2004) are semi-operational, and others like Ecopath are used for targeted investigations. Such models may also be used to fill information gaps in time and space which are not covered by observations. Both hydrodynamic and ecosystem models run on an operational basis, i.e., regular updates, are useful to supplement observation-based monitoring systems. The prerequisite is that they are well documented and validated through observations with reasonable confidence. Future monitoring systems may utilize the combined strength of observations and models; this offers huge to improve surveillance of the ecosystem.

Satellites can be useful for several monitoring tasks. Ocean colour spectre can be used to identify and estimate the amount of phytoplankton at the surface (~1 m) layer. Several climate variables can also be monitored (e.g. ice cover, cloud cover, heat radiation, sea surface temperature). Marine mammals, polar bears, and seabirds can be traced with attached transmitters.

Aircraft surveys can also be used to monitor several physical parameters associated with the sea surface, to observe marine mammals at the surface, and to estimate harp seal pup production in the White Sea.

Along the Norwegian coast, ships-of-opportunity provide weekly sea surface temperature measurements along the path of their journey.

Tagging fish and marine mammals has been used for many years to track their horizontal migration and vertical movements. Historically the tags have only provided information about starting location and recapture location, but now electronic markers can monitor several parameters, i.e., geographic coordinates (position through satellite signals when at surface), in situ temperature, and salinity.

Databases are not monitoring, but they serve as important “platforms” facilitating further work and analyses of the data collected. Many databases have been developed for the Barents Sea ecosystem, but few are linked and many are difficult to access without a high level of expertise. However, work is ongoing toward both higher accessibility and to establish better linkages between databases.

Of particular relevance for ecosystem studies,  both the newly developed aggregated ecosystem database BARMAR (Barents Sea Marine Atlas), and the fish stomach contents databases at IMR and PINRO — containing results of approximately 380 thousand stomachs examined by the end of 2006 (Dolgov et al., 2007)) —should be mentioned.

Several international hindcast databases are available (including parameters such as sea surface temperatures, sea surface salinity, ice cover, etc), as well as data from the large climate change models (Randall et al., 2007). They use a combination of numerical models and available observations to estimate a number of climate variables globally.