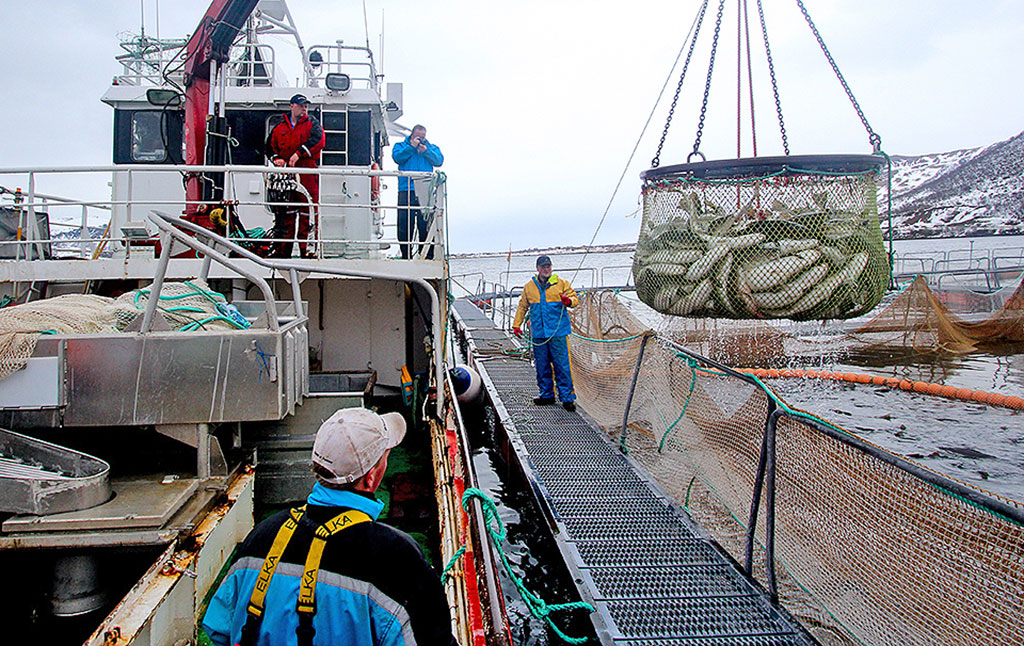 Russia's salmon aquaculture sector is also growing rapidly, and the outlook is good for Russian Atlantic salmon production particularly in the Murmansk region. Since early 2013, Russia has experienced a rise in production from its aquaculture sector. In 2011, the company’s production of farmed salmon was 8,500 tonnes and by the end of this year, this amount is expected to increase to 21,000 tonnes. A second salmon farm was planned to be launched in the Barents Sea during 2013 in Ura Bay, where around 1.6 million Atlantic salmon smolts expected to be placed into farming operations and first salmon harvest planned for 2014. Two additional sites were planned for initiation in 2014.

However, expansion of the aquaculture industry gives rise to a number of concerns, including: the intrusion of fish farms into vulnerable marine and coastal areas; 2) the impacts of aquaculture on the marine environment; and the overall sustainability of an industry that depends on large catches of wild fish to feed farmed fish (Nagoda, 2014).

An increase in severe weather events can be a cause of escapes from fish pens and consequent loss of production. Escapement is also a potential problem in terms of the spread of disease. However, technological developments may compensate for this (ACIA, 2013). Breeding of escaped farmed fish also potentially results in genetic changes which may reduce the population fitness and productivity in wild populations (McGinnity et al., 1997; Hindar et al., 2006).

Warmer waters may also have negative effects on aquaculture since the presence of lice and diseases may be related to water temperature. In recent years high water temperatures in late summer have caused high mortality at farms rearing halibut and cod, the production of which is still at a pre-commercial stage. Salmon is also affected by high temperatures and farms may expect higher mortalities of salmon. A rise in sea temperatures may therefore favor a northward movement of production, to sites where the peak water temperatures are unlikely to be above levels at which fish become negatively affected (ACIA, 2013).

Poorly managed and poorly regulated aquaculture operations can have severe negative impacts on marine environments through the release of excessive nutrients and chemicals. Escapement of farmed fish increases the risk of disease transfer. The extraction of freshwater from rivers may also have a severe impact on the river habitat. Discharge of waste water can contain harmful concentrations of nutrients, chemicals and be a potential source for infection of, for example, the lethal salmon parasite Gyrodactylus salaris (Nagoda, 2014).

The aquaculture industry is dependent on capture fish for salmon feed. Accordingly, another important aspect of the aquaculture industry is its dependence on a huge supply of pelagic fish species as capture fish for salmon feed. Fishmeal and oils are important components of the diet of many species of farmed fish, including salmon and trout. The quantity needed is so high that the industry at a global level is sensitive to rapid fluctuations in important pelagic stocks. Reduced supply pelagic species on the international market could lead to increased prices of fishmeal. Climate change may cause a lack of and/or variability in the market for such products, but this is also an area where research may lead to the development of other feed sources (ACIA, 2005). A recent assessment by the IPCC states that unless alternative sources of protein are found, aquaculture could in the future be limited by the supply of fishmeal and oils (Vilhjálmsson et al., 2013).