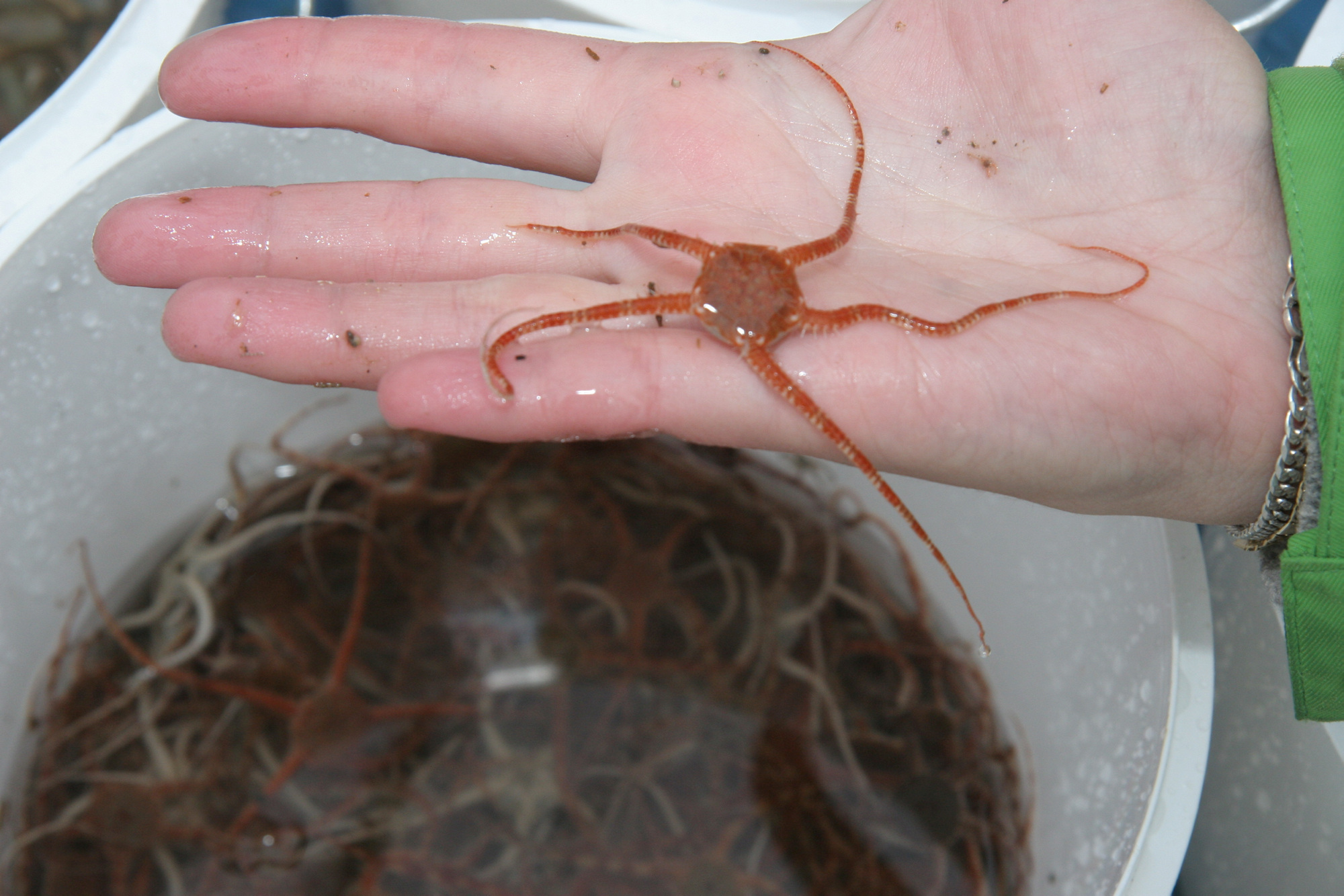 Benthos is an essential component of the marine ecosystems. It can be stable in time, characterizing the local situation, and is useful to explain ecosystem dynamics in retrospect. It is also dynamic and shows pulses of new species distribution, such as the snow crab and the king crab, and changes in migrating benthic species (predatory and scavenger species such as sea stars, amphipods and snails with or without sea anemones). The changes in community structure and composition

reflect natural and anthropogenic factors. There are more than 3000 species of benthic invertebrates registered in the Barents Sea (Sirenko 2001), but here we only present the megafaunal component of the benthos collected by trawl and registered (species, abundance and biomass) during the BESS survey. This includes mainly large bodied animals with long life spans. This includes mainly large-bodied animals with long life spans. This investigation was initiated in 2005 - only a short timeline relative to investigations related to plankton and fish. Accordingly, interpretation of long-term trends for megabenthic data must be pursued with caution.

Benthos collection. Benthos, collected with the standard demersal trawl gear during the BESS, have been registered annually by benthic taxonomic specialists since 2005 onboard Russian vessels; annual surveys have been conducted during 2007-2013 and 2015-2016 onboard Norwegian vessels. Species identification has been to the lowest possible taxonomic level. In cases where there no specialist was available onboard (2007-2008 in northern Barents Sea in the Norwegian sector), the benthos has only been identified to major benthic group. Work is ongoing between IMR and PINRO specialists to standardize and improve species identification, as well as the catchability of benthos between different trawls and vessels. Several articles have been published based on the resulting high-resolution taxonomic data (Anisimova et al., 2011; Jørgensen et al., 2015a; Jørgensen et al., 2015b). 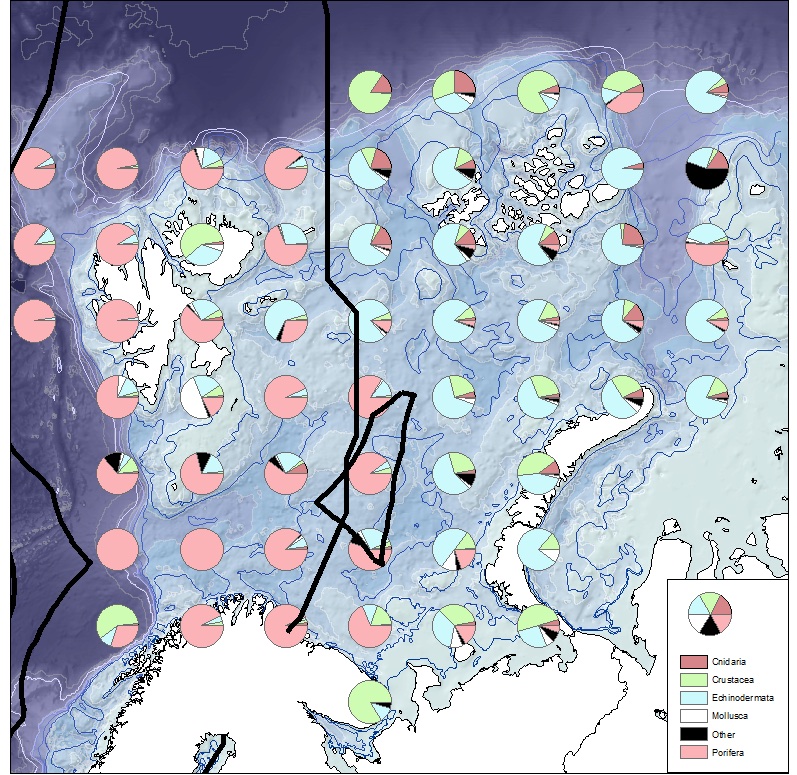 Statistical analyses of monitoring data show that there are four distinct zones of benthos in the Barents Sea (Jørgensen et al. 2015a, Figure 3.4.2). These four zones are characterized with temperate species in the southwestern zone, cold-water species in the eastern zone, arctic species in the northern and north-eastern zone, and an area in the eastern Barents Sea where the snow crab, a new nonindigenous large benthic species, are expanding. The period with warmer water entering the Barents Sea has led to migration eastwards and northwards of temperate species and groups (Jørgensen et al. 2015a). The retreating ice front opens for new areas for human impact as well as imposing changes in the planktonic production and annual cycles, with possible impact on the benthic zones. 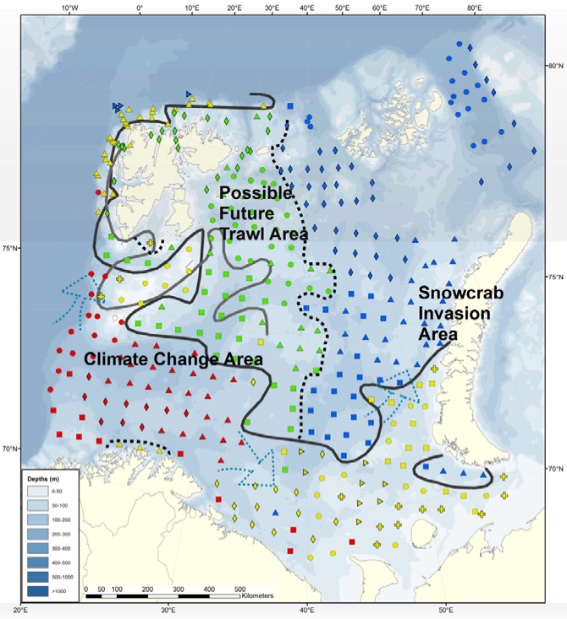 The status of the megabenthos in 2017 and possible trends.

Inter-annual fluctuation of the megafaunal biomass

The relatively short monitoring time series for distribution of benthos (g/nml trawling) shows relative stable large-scale patterns, with high biomass particularly in the Southwest; biomass is also stable in the Northeast, but more variable. In central Barents Sea, biomass has a high level of spatial and temporal variability (Fig. 3.4.3) which is difficult to characterize due to the relatively short data time series.

The eastern part of the Barents Sea has the largest fluctuations in biomass, but non-standardized trawl technicalities may influence some of these fluctuations.

The most problematic years of benthic monitoring to estimate total biomass were: 2005 and 2014 due to reduced research area in Norwegian waters; 2012 and probably 2017 when biomass was overestimated in the Russian zone due to the technical issues with vessels; and 2014, 2015, and 2016 when the Loop Hole area was not sampled because of a commercial snow crab fishery. In addition, in 2016 benthos received low sampling priority in the Norwegian zone causing possible inconsistencies. 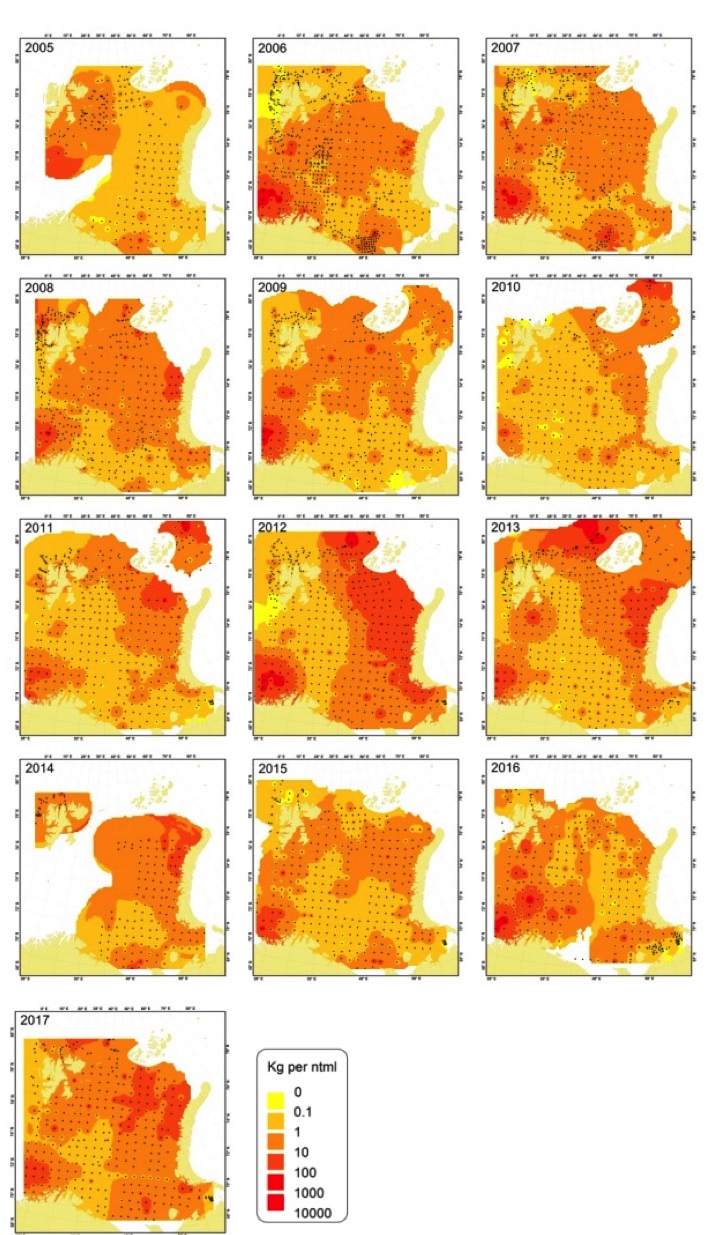 Figure 3.4.3. Distribution of the megabenthos biomass (excluding Pandalus borealis) in the Barents Sea from 2005 to 2017.

To estimate long-term dynamics of the benthos, inter-annual changes of the mean biomass were calculated for the total Barents Sea, then separated into the four sectors “NE”, “NW”, “SW”, and “SE” before being analyzed.

The total Barents Sea. Estimates of annual mean biomass for the total Barents Sea fluctuated during the 2006-2017 period (Fig. 3.4.4.). However, the short time series of observations, combined with years without full benthic coverage (2014), and years with technical changes in the Campelen trawl — affecting the catchability of benthic organisms (2012) — limit the ability to draw firm conclusions.

However, deviations from the 2006-2017 inter-annual average (biomass anomalies) were lowest in 2010 and 2015-2016 (Fig. 3.4.5.). These decreases may be explained by observed temperature minimum 6-7 years earlier. This hypothesis is supported by previous investigations documenting response of the macrobenthos to hydrological fluctuations in the Barents Sea (Blacker 1957a, b; Lubin et al. 2011, Lubhina et al. 2016; Denisenko, 2013). But, longer time series of observations are required to confirm the existence of a correlation between megabenthic biomass and short-time climatic fluctuations.

http://www.pinro.ru)" width="600" height="" />Figure 3.4.5. Temporal biomass fluctuations and oceanographic features of the Barents Sea. a) Megafauna biomass deviation from the inter-annual average level (2006-2017), b) area of the bottom covered by arctic water (part of the total) (WGIBAR report 2017, Fig. 3.1.17) and c) the temperature anomalies in the Kola sections (http://www.pinro.ru)

Northwest (NW) and Southwest (SW). During most of the long-term monitoring period, the SW region had higher biomass than the NW region, even though sponge catches >1T in the SW were excluded. Mean biomass of the NW, SW, and the total Barents Sea was lowest in 2010 (Fig 3.4.6). Subsequently, all three values increased until 2013. The 2014 value is unknown due to missing coverage, but mean biomass increased between 2015 and 2017 to the highest measured (48 kg/nml) for the SW Barents Sea; and a value comparable to the max year (2009) in the NW (33 kg/nml). Long-term variation in mean biomass of the NW, SW, and total Barents Sea shows strong correlations. This may indicate that the western Barents Sea is driven by factors similar to those driving the total Barents Sea.

Figure 3.4.6. The inter-annually mean biomass fluctuation of the SW (red),) and NW (green) sectors of the Barents Sea in the 2005-2017. The dotted line is the total Barents Sea mean biomass (see also fig y3). Biomass of Pandalus borealis and all catches more than 1T are excludedNW=74-80°N 15-40°E but excluding all stations W and N of Svalbard, SW=65-74°N and 10-40°E. All stations west and north of Svalbard and all sponge catch >1T excluded.

Southeast (SE) and Northeast (NE). During the entire monitoring period (other than2006) mean biomass of the megabenthos in the SE region was below that of the total Barents Sea (Fig 3.4.7). This might be explained by: 1) the high level of commercial trawling in this area; and 2) hydrological features of the Pechora Sea area (brackish water from Pechora River runoff). The first possible explanation becomes more plausible considering the high benthic biomass observed in the NE, where there is no trawling activity (Lubin et al., 2011).

The highest biomass (catch >1T excluded) in the Barents Sea was recorded in the NE. In most of the years monitored, biomass in the NE was above the mean for the total Barents Sea (Fig. 3.4.7). But, following 2013, mean biomass decreased (see Fig. 3.4.3), to a record low (<20 kg/n.ml) in 2016, and below the total Barents Sea mean. In 2017, however, record high biomass was observed in the NE (116 kg/nml); the highest value recorded both with and without snow crab biomass.

Since 2013, benthos biomass has decreased. This could be explained by both: overlap with the maximum distribution of snow crab (see below), and; increasing bottom temperatures (chapter 3.1). But the strong increase of benthos biomass in 2017 the NE could be an effect of the trawl-sampling.

The snow crab (Chionoecetes opilio) is a non-indigenous species in the Barents Sea; first recorded in 1996 in the Goose Bank area. Of the several theories explaining the appearance of snow crab in the Barents Sea, introduction via ballast water is the most popular; this believed to have occurred during the 1997-1993 period (Strelkova, 2016).

Regular annual monitoring of the snow crab population began with the Barents Sea the Ecosystem Survey in 2004. This survey is, currently, the most important source of information on population status.

Assessments of snow crab dynamics based on ecosystem survey data (table 3.4.1 and figures 3.4.8 and 3.4.9) indicate that in the Barents Sea the snow crab population is still developing.

Table 3.4.1 Characteristics of the snow crab catches during ecosystem surveys of 2005-2017 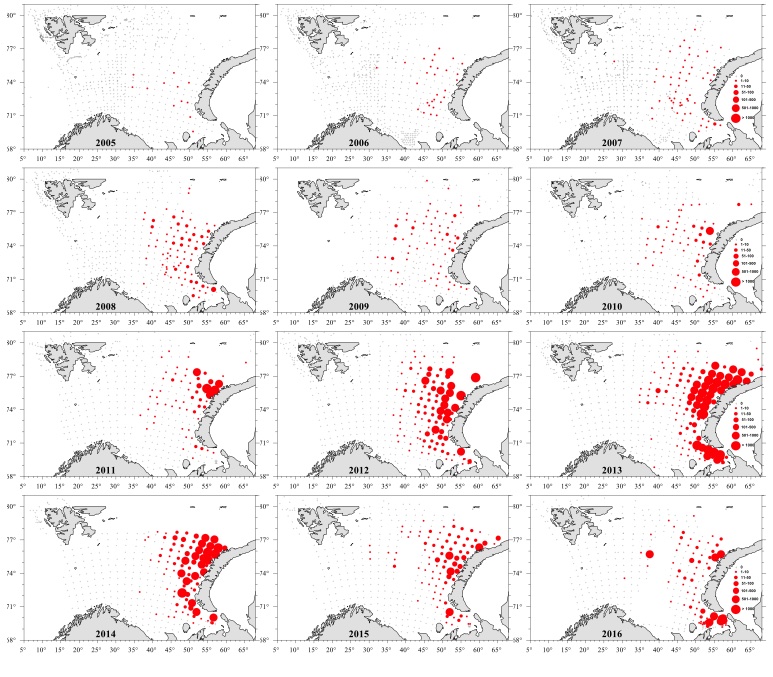 Figure 3.4.8. Dynamics of the snow crab population in the Barents Sea, in number of individuals in 2005-2016 (according to ecosystem data). 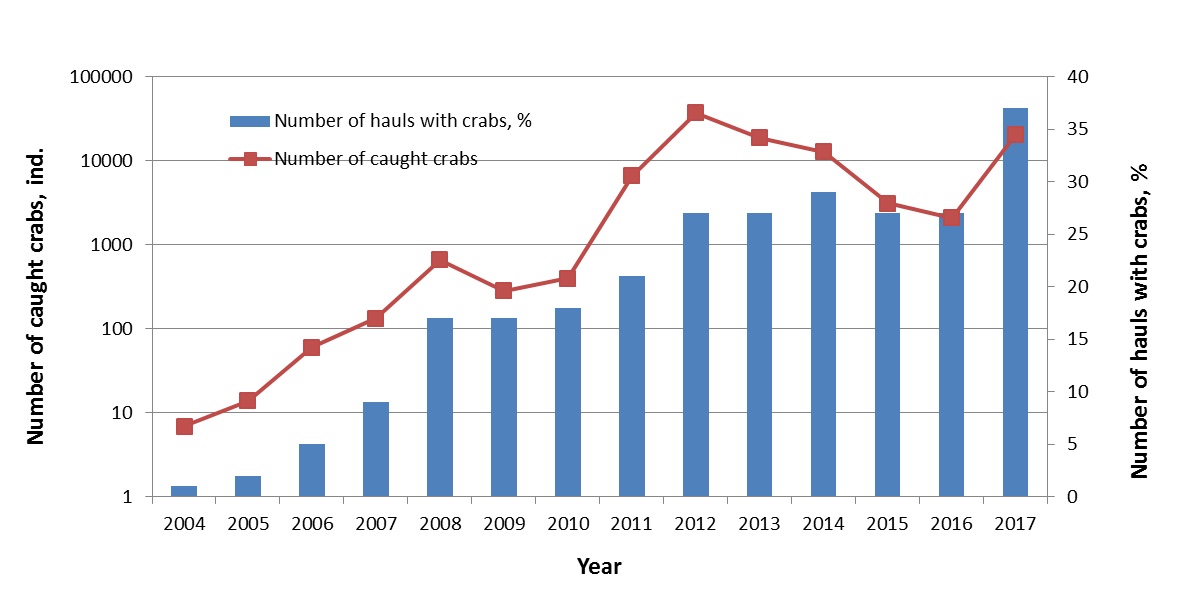 Figure 3.4.9. The dynamic of the snow crab population in the Barents Sea given as the total number of crabs (blue bars) and the number of trawl hauls with crabs (red line) during the Ecosystem Survey 2004-2017.

In 2017, as in previous years, the densest aggregations of snow crabs (more than 1000 ind./nml) were concentrated in the central part of the Barents Sea in the Loop Hole area and near Novaya Zemlya archipelago within the Russian Economic Zone. In 2017, the snow crab was for the first time recorded at Svalbard. One record was made in Stor-fjord at 162 m depth (two immature males with 47mm and 48 mm carapace widths); the other was northwest of Svalbard archipelago at 506 m depth (one juvenile male with a 14 mm carapace width) (Figure 3.4.10.). 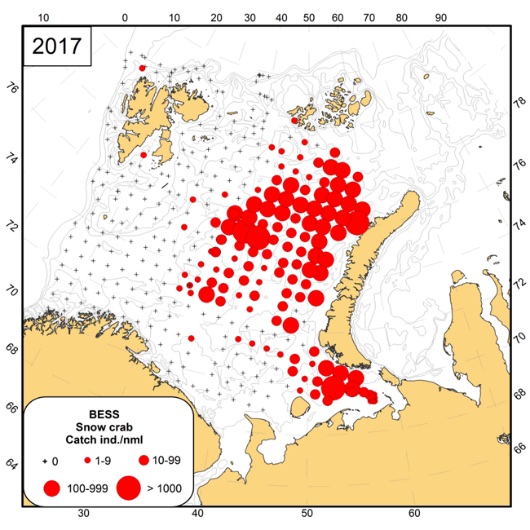 Figure 3.4.10. Distribution of the snow crab (Chionoecetes opilio) in the Barents Sea in August-October 2017 as observed by the Ecosystem Survey. 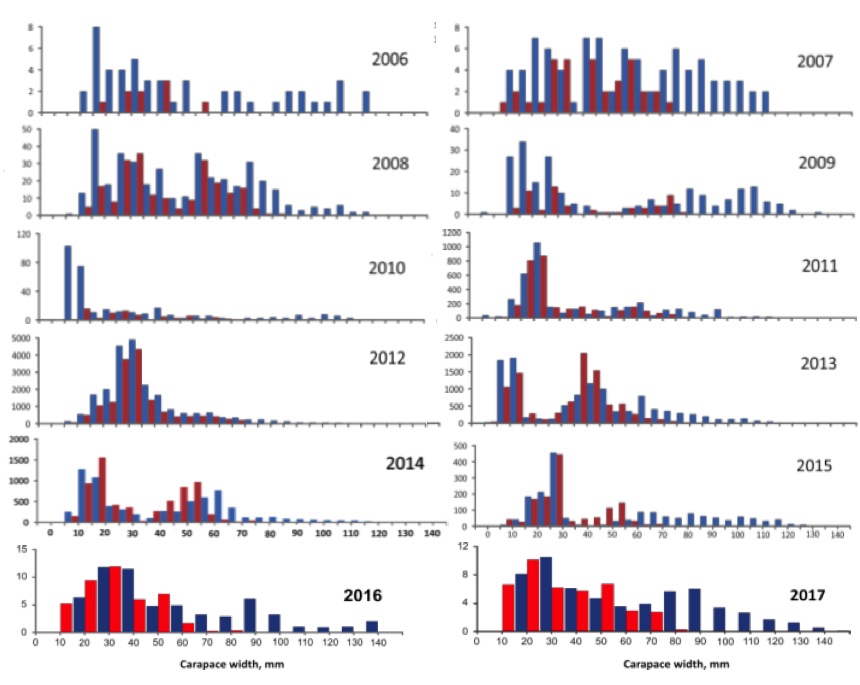 Since 2003, snow crabs in the eastern part of the Barents Sea, have been recorded with bottom fish species (cod, haddock, catfishes, American dub, and starry ray) in their stomachs.

Northern shrimp (Pandalus borealis) is common and widely distributed in the Barents Sea. During the 2017 BESS survey, it was recorded at 281 of the 376 trawl stations; shrimp biomass varied from several grams to 439.8 kg per nautical mile, with an average catch of 13.8±1.7 kg/nml. The densest concentrations of shrimp were registered in central Barents Sea, around Spitsbergen, and in Franz Victoria Trough (Figure 3.4.12). In 2017, the northern shrimp biomass index (method of squares) was 314.2 thousand tons; 1.5% higher than in 2016, and 8% lower than the average index value. 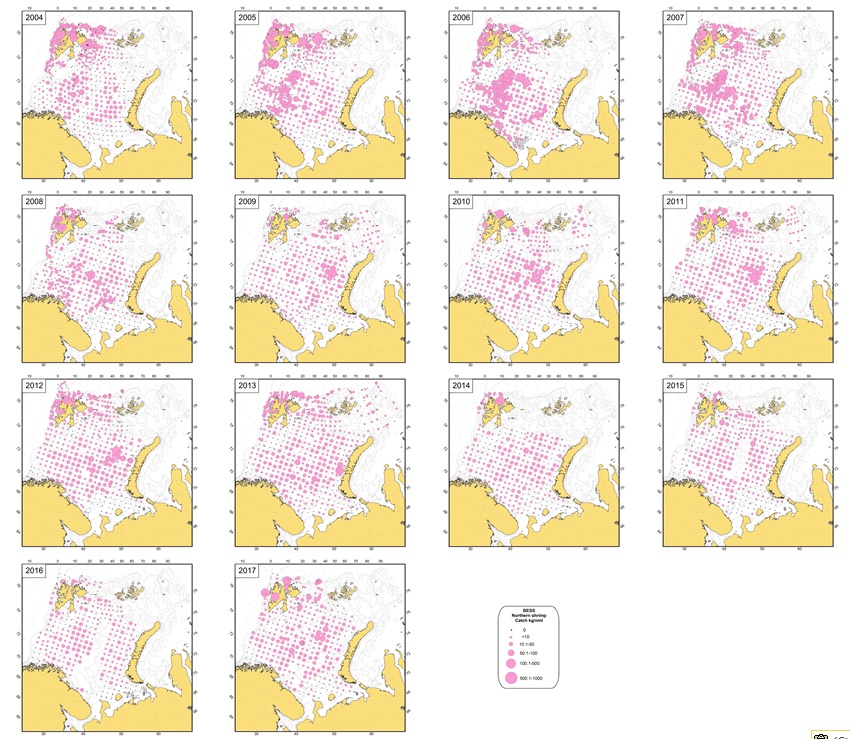 Figure 3.4.12. Distribution of the Northern shrimp (Pandalus borealis) in the Barents Sea, August-October 2004-2017

During the 2006-2007 BESS surveys, average catches of the shrimp varied from 4 to 11 kg (Fig. 3.4.13), all stayed stable around the average level, regardless of the fishery. The increase of biomass in 2017 may be connected with the investigations in Franz Victoria Trough with dense biomasses of shrimp. 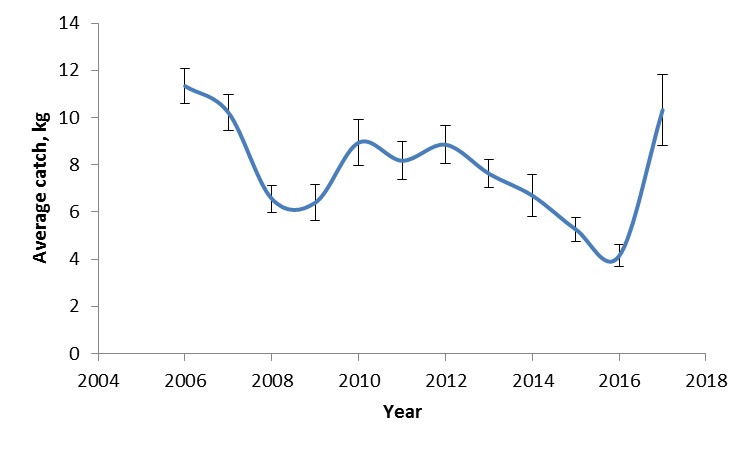 Figure 3.4.13. Average catches of the Northern shrimp (Pandalus borealis) in the Barents Sea during ecosystem surveys 2006-2017

Biological analyses of the northern shrimp population in the eastern part of the survey area were conducted in 2017 by Russian scientists. Similar to 2016, the bulk of the population consisted of younger individuals: males of 12-27 mm carapace length; and females of 17-30 mm carapace length (Figure 3.4.14).

In the western survey area, as in the eastern part of the Barents Sea, smaller shrimp (males 11-23 mm carapace length, and females 18-28 mm carapace length) were most abundant; comprising up 64% of catches (Figure 3.4.15) 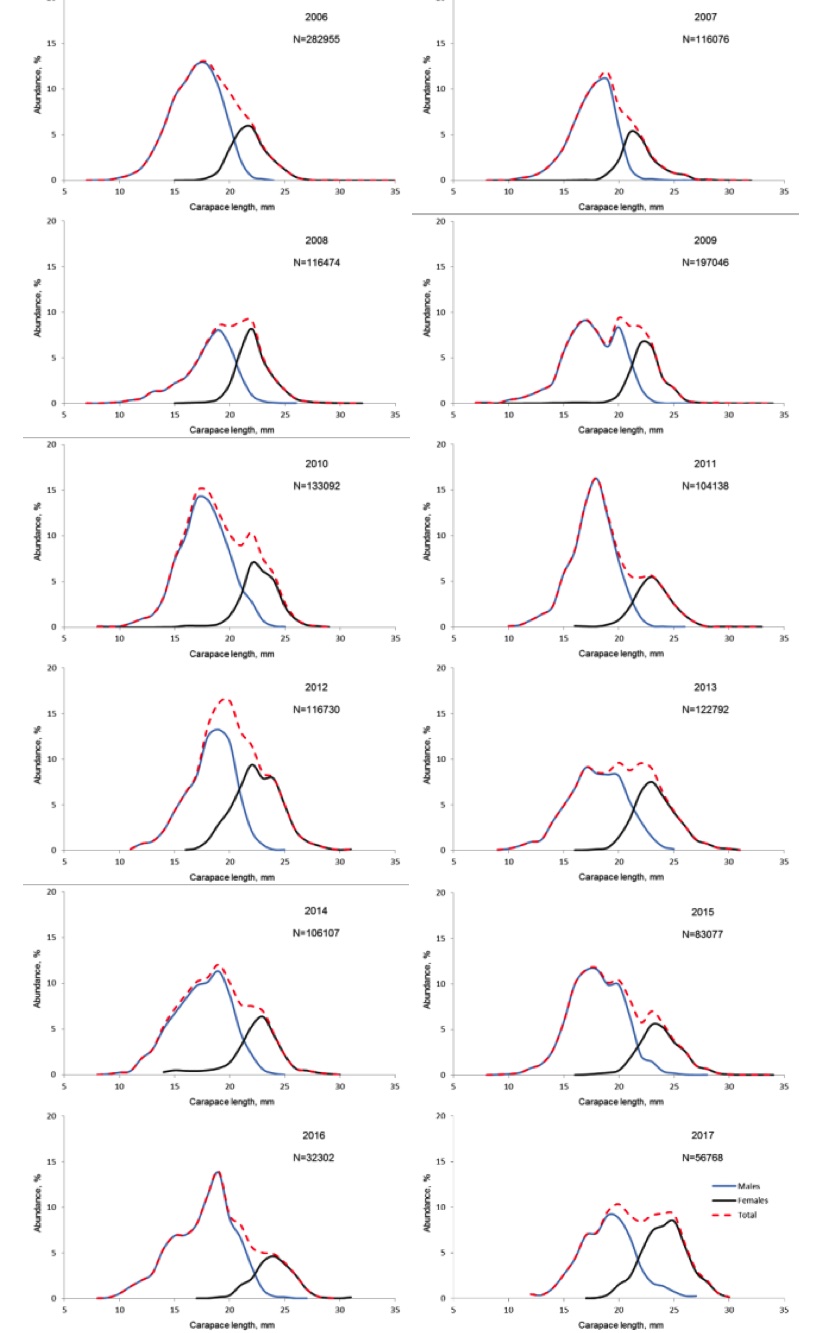 Figure 3.4.14. Size and sex structure of catches of the Northern shrimp (Pandalus borealis) in the eastern Barents Sea, August-October 2006-2017 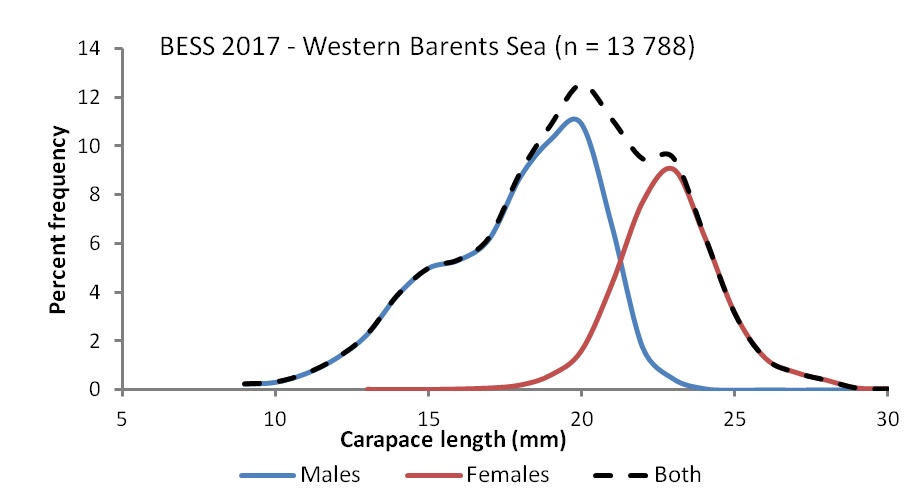 Figure 3.4.15. Size and sex structure of catches of the Northern shrimp (Pandalus borealis) in the western Barents Sea, August-October 2017