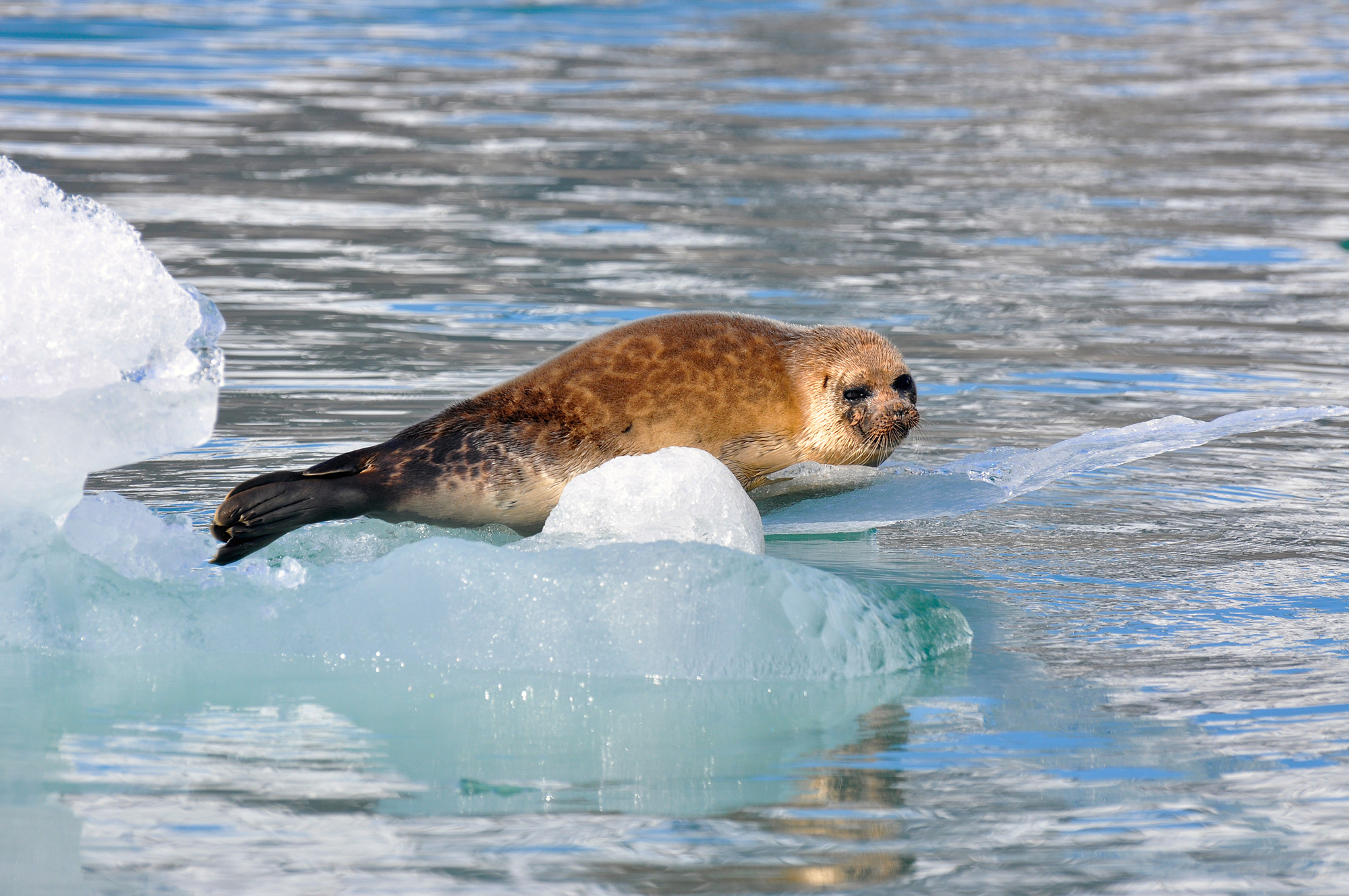 Data have not yet been analysed but the qualitative impression was that minke whales were abun-dant in northern and eastern areas (Figure 3.8.1.1). Harbour porpoises were observed mostly in the southern parts of the area covered, and they are associated with the coastal areas along Kola and fjord systems. Humpback whales were sighted in the northwest, which is considered an early appearance in waters where they usually occur later in autumn in association with capelin distribution. White-beaked dolphins were, as usual, observed in southern and central parts of the survey area, especially over the Central Bank. It is noteworthy that a considerable number of harp seal observations — single animals and groups — were made in open waters north of about 74°N. During summer, ime harp seals are usually closely associated with the ice edge in the north. 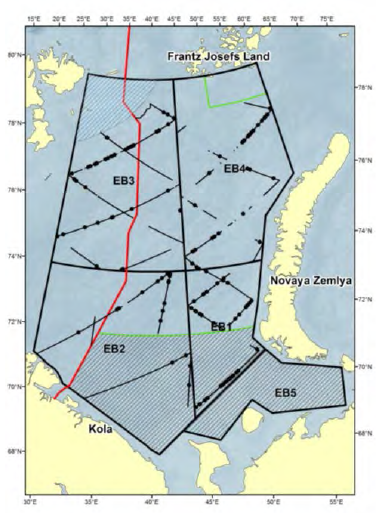 Although an estimate of minke whale abundance from the 2017 summer survey is not yet available, we have a series of abundance estimates from earlier surveys, which can be compiled to illustrate the status over a time of nearly 30 years (Figure 3.8.1.2). The summer abundance of minke whales in the Barents Sea is now about 50 000 animals and has been quite stable or increasing over the period. The sighting rate from the 2017 survey is the highest recorded which may confirm the apparent increasing trend at present.

Figure 3.8.1.2. Summer abundance of minke whales in the Barents Sea over the past nearly 30 years.

During the ecosystem surveys in the Barents Sea in August–October 2017 marine mam-mal observers were on all vessels. In total, 1518 individuals of 9 species of marine mam-mals were observed and an additional 46 individuals were not identified to species. The observations are presented in Table 3.8.1 and distributions in the Figures 3.8.1.3 (toothed whales) and 3.8.1.4 (baleen whales). 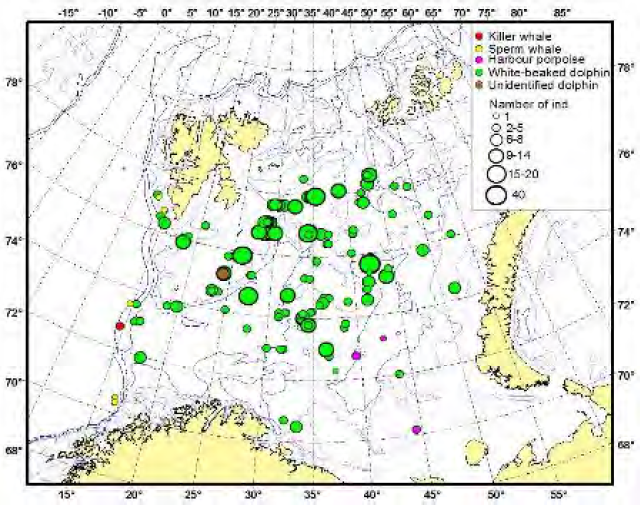 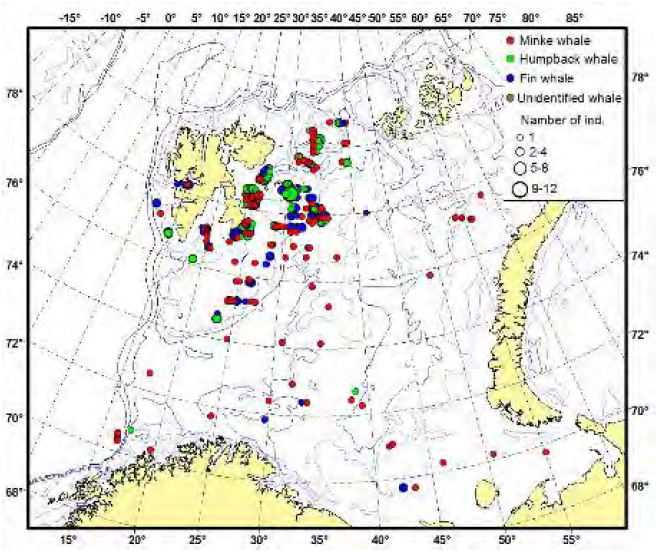 In 2017, the only pinnipeds observed were harp seals and bearded seals (Erignathus barbatus). Harp seals were recorded on Great Bank, while bearded seals occurred north-ward of White Island. Polar bears (Ursus maritimus) were not observed during the 2017 survey, most likely due lack of the ice in the surveyed area.

About six million pairs from 36 seabird species breed regularly in the Barents Sea (Bar-rett et al. (2002), Table 3.8.2.1). Allowing for immature birds and non-breeders, the total number of seabirds in the area during spring and summer is about 20 million individ-uals. 90% of the birds belong to only 5 species; Brünnich’s guillemot, little auk, Atlantic puffin, northern fulmar and black-legged kittiwake. The distribution of colonies is shown in Figure 3.8.2.1. Colonies in the high-Arctic archipelago are dominated by little auks, Brünnich’s guillemots and kittiwakes. These birds utilize the intense secondary production that follows the retreating sea ice. Little auks feed mainly on lipid rich Calanus species, amphipods and krill while Brünnich’s guillemots and black-legged kittiwakes feed on polar cod, capelin, amphipods and krill. The seabird communities, as well as their diet change markedly south of the polar front. In the Atlantic part of the Barents Sea, the seabirds depend more heavily fish, including fish larvae, capelin, I-group herring and sandeels. The shift in diet is accompanied by a shift in species composition. In the south, Brünnichs’ guillemots are replaced its sibling species, the common guillemot. Large colonies of puffins that largely sustain on the drift of fish larvae along the Norwegian coast, are found in the southwestern areas. 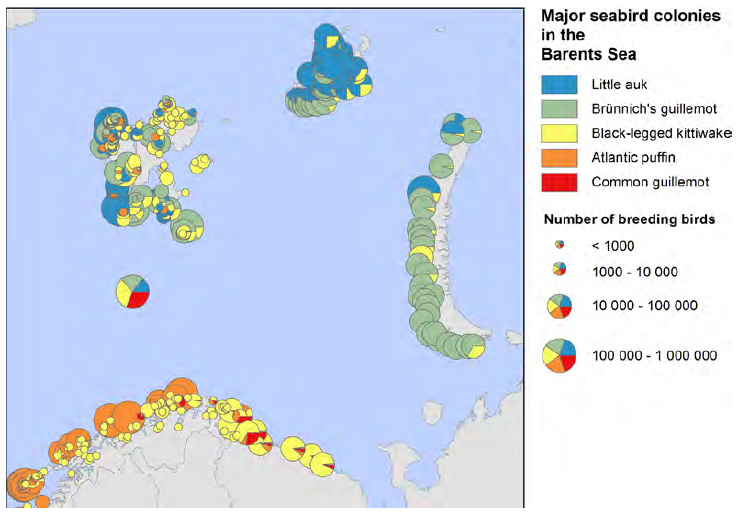 Table 3.8.2.1. Seabirds in the Barents Sea sorted by breeding population size in decreasing number. Breeding pairs are from Strøm et al. (2009). Observations on BESS 2017 are the ob-servations from Norwegian and Russian vessels during the ecosystem survey in 2017. 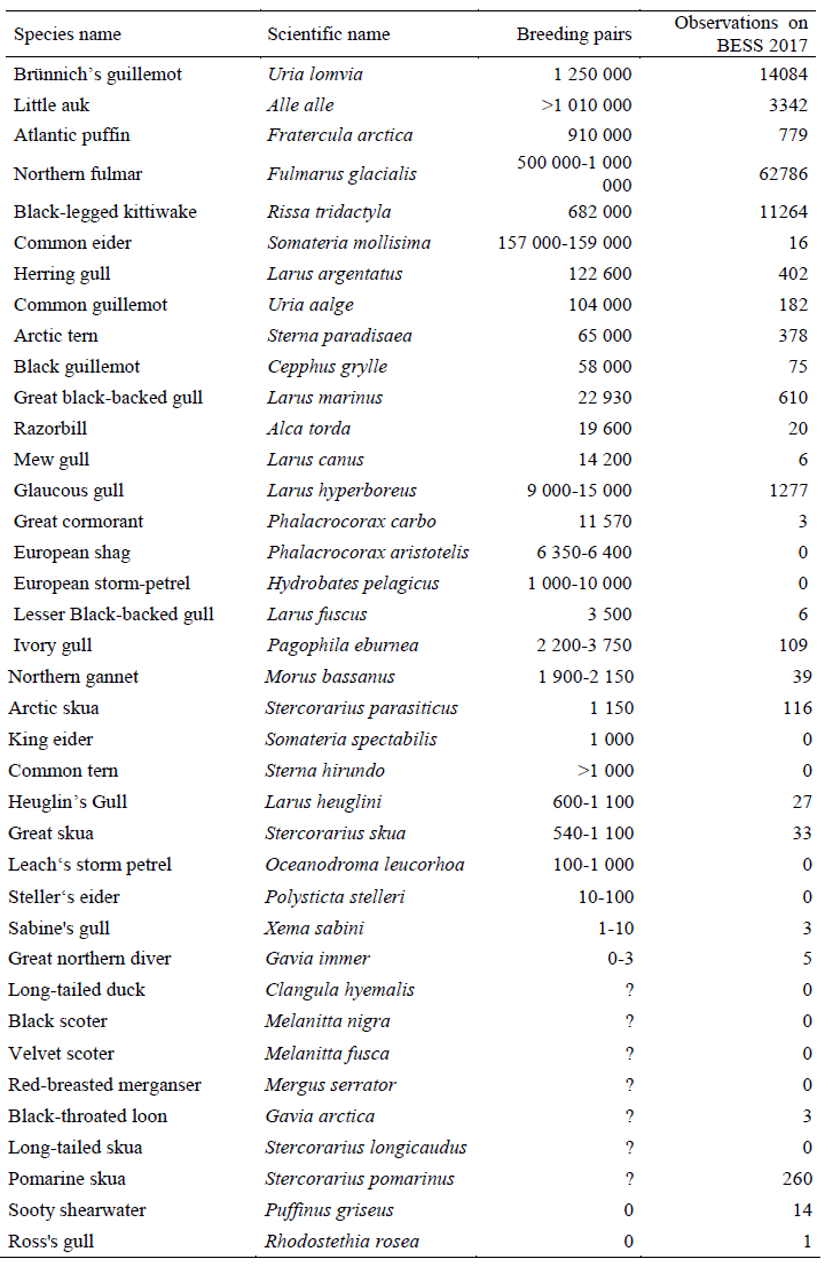 Population monitoring in Norway and Svalbard has revealed a marked downward trend for several important seabird species the last 30 years, including puffin, Brünnich’s guillemot and kittiwake (Figure 3.8.2.2). The population of common guil-lemot was decimated in the 1980s mainly due to a collapse in the capelin stock com-bined with low abundance of alternative prey. The population has increased steadily since then. The status and trends of the large populations of seabirds in the Eastern Barents Sea is less known. 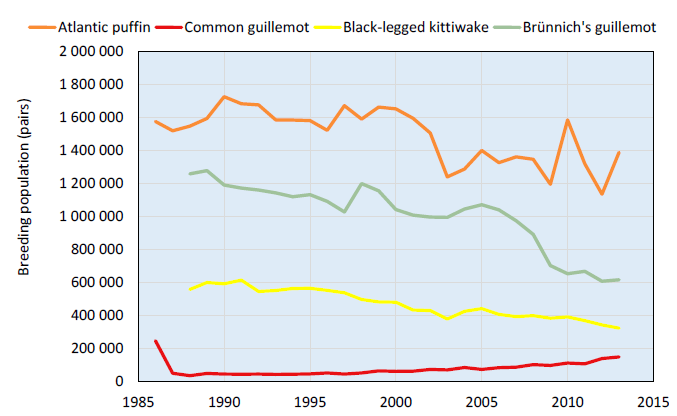 Recent tracking studies (see www.seatrack.no) show that after the breeding season, parts of the adult populations of kittiwakes, puffins and common guillemots from col-onies along the Norwegian coast migrate into Barents Sea to feed, possibly increasing the number of birds in the area in August and September. However, during September and October the populations of Brünnich’s guillemots and little auks from colonies in West-Spitsbergen and Bjørnøya start their migration westward, crossing the Norwe-gian Sea to reach their wintering grounds in the Northwest Atlantic. The large eastern populations (birds breeding in East Spitsbergen, Franz Josef Land and Novaya Zem-lya), however, seem to over-winter in the southern Barents Sea. Kittiwakes do also mi-grate out of the Barents Sea during winter, while common guillemots stay in the south-eastern part of the Barents Sea throughout the non-breeding period. Finally, only a few puffins from the eastern colonies over-winter in the southern Barents Sea, while the rest of the population roam over large areas in the central North Atlantic. Most seabird populations return to the colonies in late winter or early spring.

Broadly, the spatial distribution of seabirds during the ecosystem survey reflects the climatic gradient from a boreal Atlantic climate with common guillemots, puffins, her-ring and black-backed gull in the south and west, to an Arctic climate with little auks, Brünnich’s guillemots and kittiwakes in the north and east (Figure 3.8.2.3). Seabirds have been surveyed uninterruptedly on Norwegian vessels in the western part of the Barents Sea since 2004. Based on the minimum annual survey extent, the abundance (Figure 3.8.2.4) of different species and the centre of gravity of the spatial distribution (Figure 3.8.2.5) was calculated for each year. 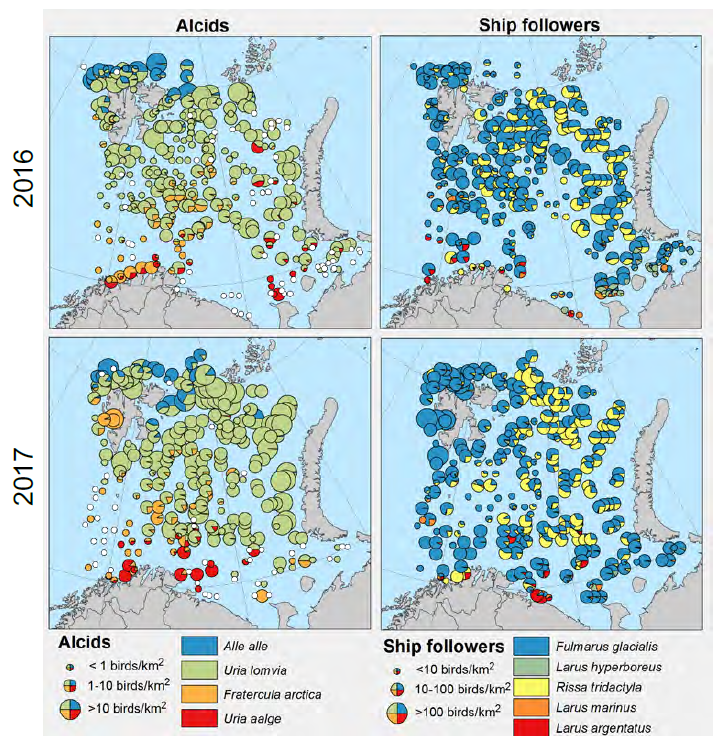 Note the large fluctuations in the abundance estimates from the at-sea surveys (Figure 3.8.2.4). These fluctuations do not necessarily reflect the observed population trends from the colonies (cf. Figure 2). This discrepancy could be related to the fact that the at-sea abundances are influenced by annual differences in migration pattern which would mask the general population trends. There is not yet an evidence for a wide-spread “borealization” (Fossheim et al. 2015) of the seabird communities in the Barents Sea, although there is a tendency for a slight northward displacement of puffins, kitti-wakes and glaucous gull (Figure 3.8.2.5). During the last 14 years, the different seabird species seem to stay relatively fixed within their respective geographic niche. 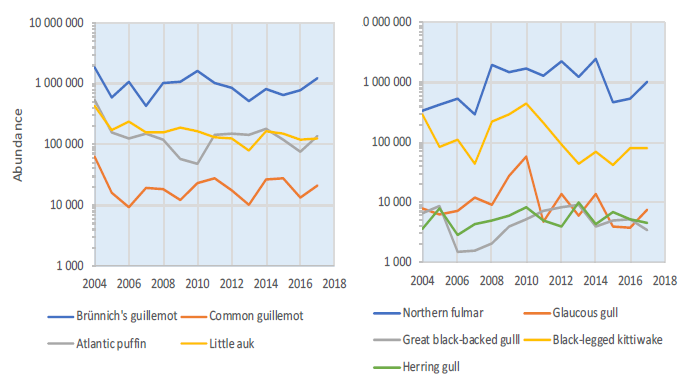 Figure 3.8.2.5. Center of gravity in the north direction of the distribution of auks (left) and shipfollowers (right) in the Western Barents Sea during the ecosystem surveys 2004-2017. Black line indicates the position of Bjørnøya.