Marine litter is defined as “any persistent, manufactured or processed solid material discarded, disposed or abandoned in the marine and coastal environment”. Large-scale monitoring of marine litter was conducted by the BESS survey during the 2010-2017 period, and helped to document the extent of marine litter in the Barents Sea (the BESS survey reports, Grøsvik et al. 2018). Distribution and abundance of marine litter were estimated using data from: pelagic trawling in upper 60 m; trawling close to the sea floor; and Visual observations of floating marine debris at surface.

The study, done by Grøsvik et al. 2018, had comprehensive, with data collected from 2,265 pelagic trawls and 1,860 bottom trawls, and surface observations made between stations. Marine litter was recorded from 301 pelagic- and 624 bottom trawl catches. In total, 784 visual observations of floating marine debris were recorded during the period. Marine litter was categorized according to volume or weight of material type: plastic; wood; metal; rubber; glass; paper; or textile. Marine litter is observed in the entire Barents Sea and distribution varied with material densities, ocean currents, and water depth. Plastic was the dominant type of marine litter observed at: 72% of surface observations; 94% of pelagic trawl stations; and 86% of bottom trawl stations (Fig 3.9.6.1.1, Grøsvik et al. 2018). Wood constituted 19% of marine litter observed at the surface, 1% in pelagic trawls, and 17% in bottom trawls. Materials from other categories — metal, rubber, paper, textile, and glass — were observed less frequently.

Pelagic marine litter was observed in 13% of all pelagic trawls with a mean of 58 gram per trawl catch, and was widely distributed (Figure 3.9.6.1.1). Plastic formed the bulk (85.1%) of pelagic marine litter observed with a mean of 0.011 mg m-3; paper formed 9.4%; textile formed 3.9%, and was more seldom observed; other materials were only observed sporadically. Pelagic plastic was significantly correlated with latitude and longitude during some years, and indicated north-eastern distribution in 2010, and northern distribution in 2011 and 2014. 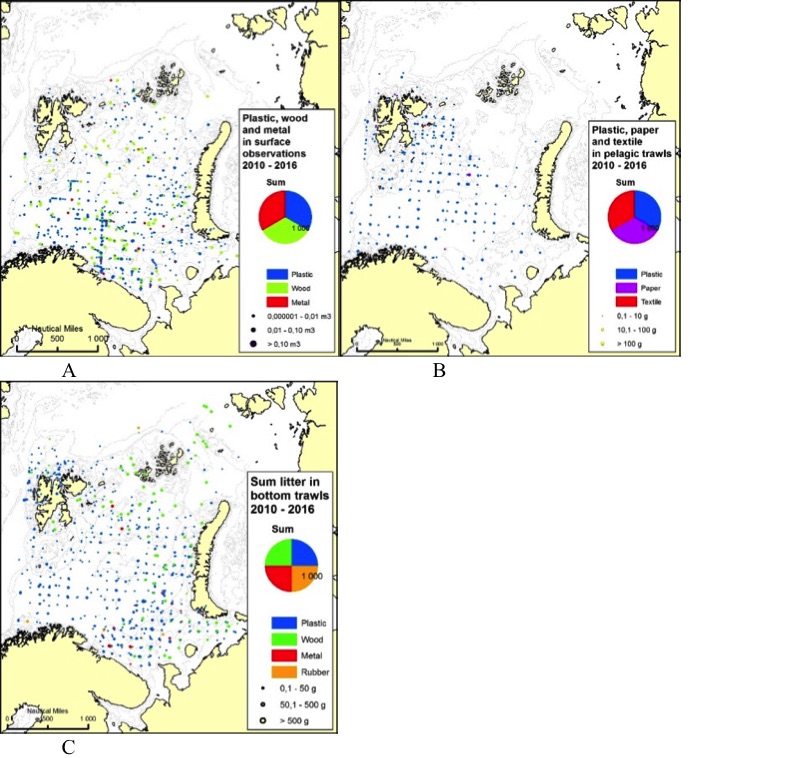 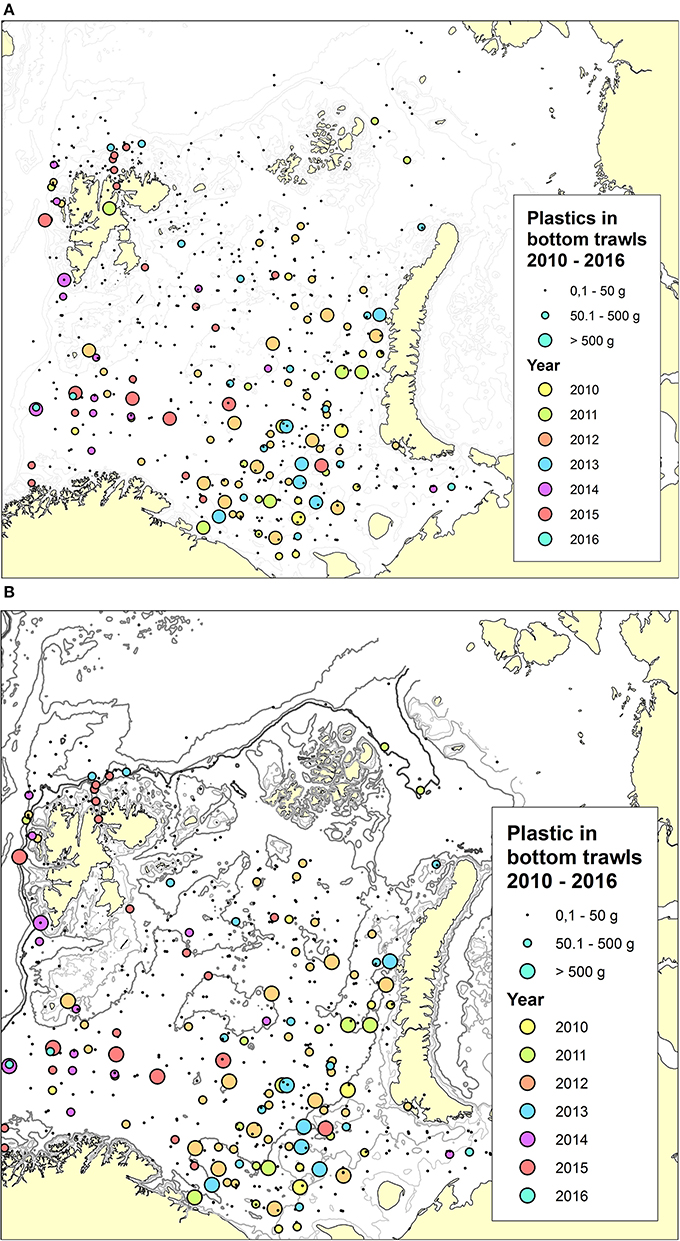 In 2017, anthropogenic marine litter floating on the surface and captured in trawls was observed onboard all Russian and all Norwegian vessels during the ecosystem survey. Plastic dominated this category in 71.3% of all observations (Fig. 3.9.6.1.3). Due to currents, it is uncertain whether polluting objects were dumped directly into some areas or had been transported in from other areas. Wood was observed in the 28.4% of all observations. Dispersed amounts of textile, paper, rubber, and metal were observed less frequently, but on occasion. Litter from fishing operations was observed in 23.5% of observations of plastic litter at the surface (Figure 3.9.6.1.3). Types of fishery litter largely consisted of ropes (OSPAR code 31), string and cord (32), pieces of nets (115), floats/buoys (37), etc. 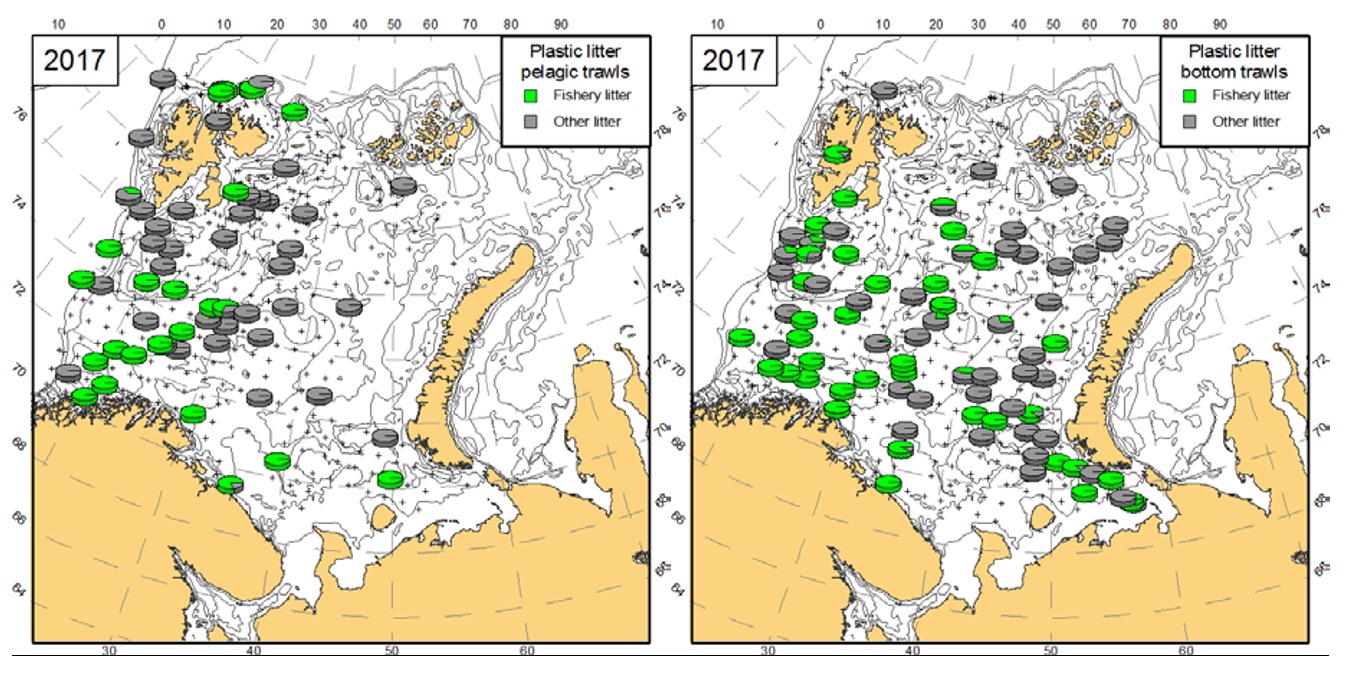 Buhl-Mortensen and Buhl-Mortensen (2017) reported litter from 1778 video transects. Each video transect is 700 m long; the average field of view is 3 m. Video recording of the seabed was performed with a tethered video platform that is equipped with a high definition color video camera (Sony HDC-X300) tilted forward at a 45° angle during transect survey mode. Two analog CCD video cameras were also deployed: one directed forward for navigation; and one for surveillance of the cable. Two laser beams (10 cm apart) were used to determine width of the field view. The video rig is towed by the survey vessel at a speed of 0.7 knots and controlled manually using a winch operator ~1.5 m above the seabed. 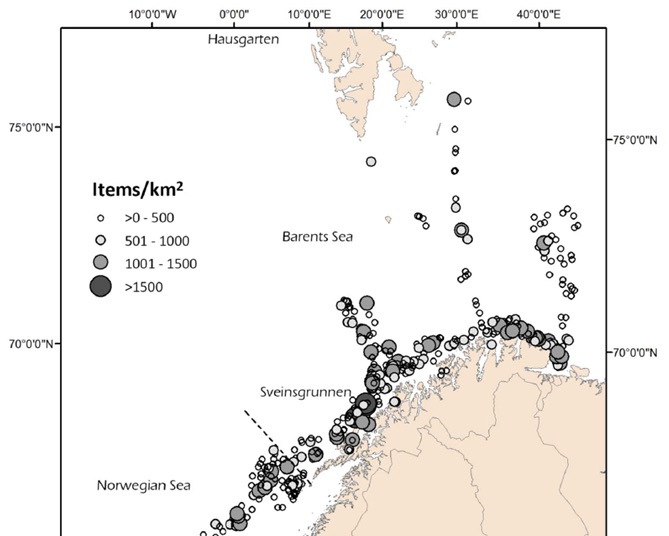 Fig. 3.9.6.3. Litter densities (kg/km2) based on Mareano programme from 2006-2007. Dashed lines mark the border between the Barents Sea and Norwegian Sea. 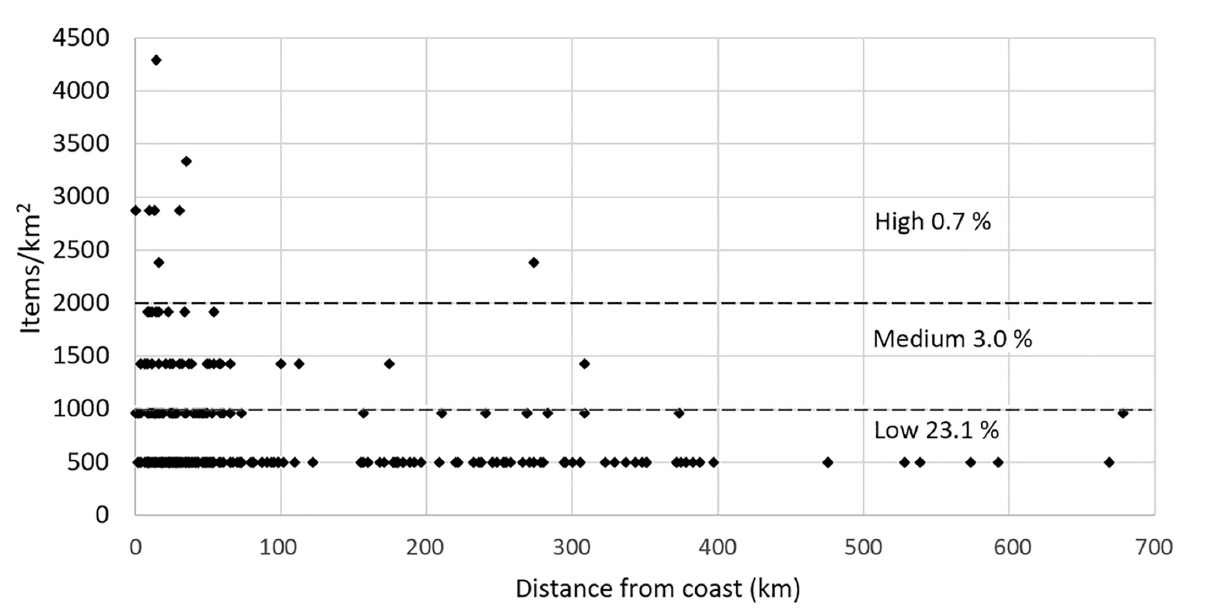 Abundance and composition of marine litter and the density of bottom trawl marks (TM) varied with depth, type of sediment and marine landscapes (Buhl-Mortensen and Buhl-Mortensen, 2018). Lost or discarded fishing gear (especially lines and nets), and plastics (soft and hard plastic and rubber) were dominant types of litter. Distribution of litter reflected the distribution of fishing intensity (density of Vessel Monitoring System (VMS) records) and density of TM at a regional scale; highest abundance was observed near the coast and in areas with high fishing intensity — indicated by VMS data. It is likely that deliberate dumping of discarded fishing gear occurs away from good fishing grounds. Extensive litter, observed close to the coast is probably the result of discarded fishing gear, but input from aggregated populations on land is also indicated from the types of litter observed (Buhl-Mortensen and Buhl-Mortensen, 2018).

In Norway, beach litter has been surveyed annually for the Norwegian Environment Agency since 2011. Ingestion of marine plastics by northern fulmars (Fulmarus glacialis) has been surveyed in Svalbard twice (1987 and 2013); in northern Norway (2011-2015); and every winter in southern Norway since 2002/03. These data have been used in a study to compare litter composition and density on beaches with stomach contents of northern fulmars from the same region to indicate the transfer of litter to marine food webs.

In total, 186 168 litter items were collected from seven Norwegian beaches during the period 2011-2017 with a mean of 3 650 items per 100 meters of beach. In general, the amount of litter decreased moving northward; the largest difference was between the mainland (with 4 000-5 000 litter items per 100 meters) and Svalbard (with 145 litter items). The litter was dominated by plastic (96%); large plastic items were more common on Svalbard, while small plastics and strings contributed a larger proportion in the south. Large and small fish nets contributed most to fisheries related litter , and the proportion was larger on Svalbard (13%) than on the mainland (5-6%).

Fulmars residing in Arctic areas had ingested less plastic than those breeding further south. In both regions, most fulmars had ingested plastic, but the proportion of birds that exceeded the EcoQO of < 0.1 g of stomach plastic decreased from 55% in the North Sea to 35% in Northern Norway, and 24% in Svalbard. Amounts of plastic in fulmar stomachs correspond with what is known about plastic pollution in their overwintering areas, with lowest amounts related to the Spitsbergen population.