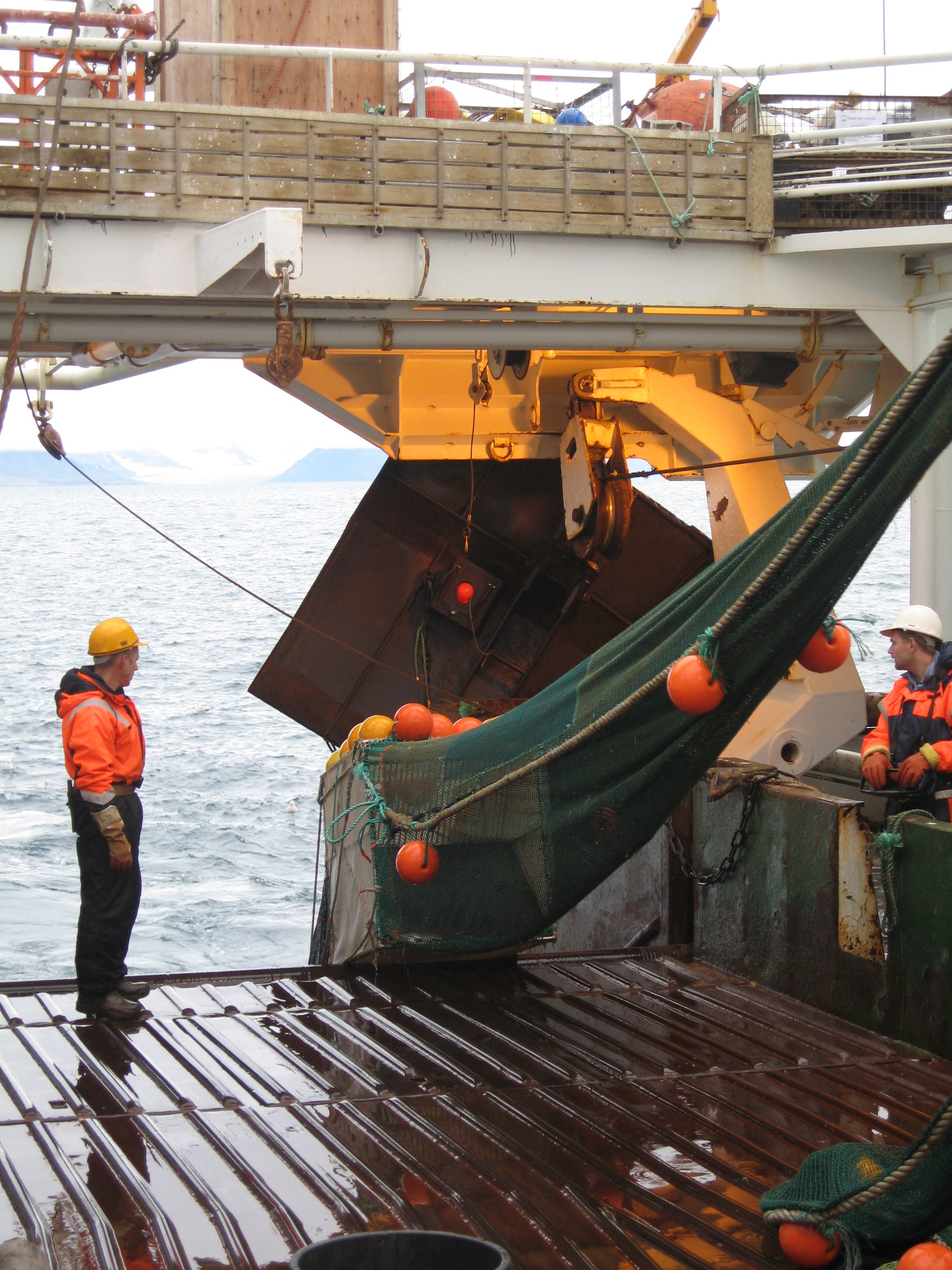 In order to conclude on the total impact of trawling, an extensive mapping of fishing effort and bottom habitat would be necessary. In general, the response of benthic organisms to disturbance differs with substrate, depth, gear, and type of organism (Collie et al. 2000). Seabed characteristics from the Barents Sea are only scarcely known (Klages et al. 2004) and the lack of high-resolution (100 m) maps of benthic habitats and biota is currently the most serious impediment to effective protection of vulnerable habitats from fishing activities (Hall 1999).

An assessment of fishing intensity on fine spatial scales is critically important in evaluating the overall impact of fishing gear on different habitats and may be achieved, for example, by satellite tracking of fishing vessels (Jennings et al. 2001). The challenge for management is to determine levels of fishing that are sustainable and not degradable for benthic habitats in the long run.

The qualitative effects of trawling have been studied to some degree. The most serious effects of otter trawling have been demonstrated for hard-bottom habitats dominated by large sessile fauna, where erected organisms such as sponges, anthozoans and corals have been shown to decrease considerably in abundance in the pass of the ground gear. Barents Sea hard bottom substrata, with associated attached large epifauna should therefore be identified.

Effects on soft bottom have been less studied, and consequently there are large uncertainties associated with what any effects of fisheries on these habitats might be. Studies on impacts of shrimp trawling on clay-silt bottoms have not demonstrated clear and consistent effects, but potential changes may be masked by the more pronounced temporal variability in these habitats. The impacts of experimental trawling have been studied on a high seas fishing ground in the Barents Sea (Kutti et al. 2005.) Trawling seems to affect the benthic assemblage mainly through resuspension of surface sediment and through relocation of shallow burrowing infaunal species to the surface of the seafloor.

During 2009-2011 work between Norway and Russia was conducted to explore the possibility of using pelagic trawls when targeting demersal fish. The purpose with pelagic trawl is to avoid impact on bottom fauna and to reduce the mixture of other species. During the exploratory fishery it was mandatory to use sorting grids and/or a more stable four-panel trawl geometry with square mesh in the top panel of the cod-end to avoid catches of undersized fish. The efficiency of pelagic trawling was also tested in comparison with bottom trawling with regards to reduce the oil consumption per kilo of fish caught, i.e., to improve profitability and reduce NOx emissions.

After three years of exploratory fishing with pelagic trawls, pelagic trawling for cod, haddock and other demersal fishes are still not allowed, mainly due to on average a smaller size of the fish and too big catches which are difficult to handle. The experiment has, however, led to a further development of the bottom trawls, including bigger trawl openings, better size selection and escapement windows to prevent too big catches.

Lost gears such as gillnets may continue to fish for a long time (ghost fishing). The catch efficiency of lost gillnets has been examined for some species and areas, but at present no estimate of the total effect is available. Ghost fishing in depths shallower than 200 m is usually not a significant problem because lost, discarded, and abandoned nets have a limited fishing life owing to their high rate of biofouling and, in some areas, their tangling by tidal scouring. Investigations made by the Norwegian Institute of Marine Research of Bergen in 1999 and 2000 showed that the amount of gillnets lost increases with depth and out of all the Norwegian gillnet fisheries, the Greenland halibut fishery is the metier where most nets are lost. The effect of ghost fishing in deeper water, e.g. for Greenland halibut, may be greater since such nets may continue to “fish” for periods of at least 2–3 years, and perhaps even longer (D. M. Furevik and J. E. Fosseidengen, unpublished data), largely because of lesser rates of biofouling and tidal scouring in deep water. The Norwegian Directorate of Fisheries has organised retrieval surveys annually since 1980. All together 10 784 gill nets of 30 meters standard length (approximately 320 km) have been removed from Norwegian fishing grounds during the period from 1983 to 2003. During the retrieval survey in 2011 the following were retrieved and brought to land: more than 1100 gillnets, 54 red king crab traps, 13 km trawlwire, 12 km of ropes, 40 km longlines, trawl cod ends, 14 tonnes of fish and about 12000 crabs, mainly red king crab.

Other types of fishery-induced mortality include slipping (pelagic catch is released, but too late to survive), burst net, and mortality caused by contact with active fishing gear, such as escape mortality (Suuronen 2005). Some small-scale effects are demonstrated, but the population effect is not known.

The harbour porpoise (Phocoena phocoena) is common in the Barents Sea region south of the polar front and is most abundant in coastal waters. A new population estimate is in progress in Norway (Bjørge 2017). The harbour porpoise is subject to by-catches in gillnet fisheries, but testing sound scaring (pingers) show good effect on reduced bycatch of harbor porpoises (Bjørge 2017). Revised estimates of harbour porpoise bycatches in two Norwegian coastal gillnet fisheries suggest an annual bycatch of ~ up to 7 000 harbour porpoises along the entire Norwegian coast (Bjørge et al. 2013). This estimate will be updated 2019, and an advice is given to establish a surveillance and monitoring group to strengthen the advices for improved bycatch management (Bjørge 2017).

Fisheries impact seabird populations in two different ways: 1) Directly through by-catch of seabirds in fishing equipment and 2) Indirectly through competition with fisheries for the same food sources.

Documentation of the scale of by-catch of seabirds in the Barents Sea is fragmentary. Special incidents like the by-catch of large numbers of guillemots during spring cod fisheries in Norwegian areas have been documented. Gillnet fishing affects primarily coastal and pelagic diving seabirds, while the surface-feeding species will be most affected by long-line fishing. The population impact of direct mortality through by-catch will vary with the time of year, the status of the affected population, and the sex and age structure of the birds killed. Even a numerically low by-catch may be a threat to red-listed species such as Common guillemot, White-billed diver and Steller’s eider.

Several birds scaring devices has been tested for long-lining, and a simple one, the bird-scaring line, not only reduces significantly bird by-catch, but also increases fish catch, as bait loss is reduced. This way there is an economic incentive for the fishermen to use it, and where bird by-catch is a problem, the bird-scaring line is used without any forced regulation.

In 2009, the Norwegian Institute for Nature Research (NINA) and the Institute of Marine Research (IMR) in Norway started a cooperation to develop methods for estimation of bird by-catch. Estimates suggest that a total of 10 000 to 12 000 seabirds are killed by Norwegian fisheries in 2009 and 2010, where Fulmars, Cormorants, Puffins, Black Guillemot and Razorbills were particularly impacted, although for some local populations of Black Guillemot and Fulmars, the loss was concluded to be a small fraction of the populations (Fangel et al. 2011).