Marine litter is defined as “any persistent, manufactured or processed solid material discarded, disposed or abandoned in the marine and coastal environment”. Large-scale monitoring of marine litter was conducted by the BESS survey during the 2010–2017 period, and helped to document the extent of marine litter in the Barents Sea (the BESS survey reports, Grøsvik et al., 2018). Distribution and abundance of marine litter were estimated using data from: pelagic trawling in upper 60 m; trawling close to the seabed; and visual observations of floating marine debris at surface.

The study, done by Grøsvik et al., 2018, had comprehensive, with data collected from 2265 pelagic trawls and 1860 bottom trawls, and surface observations made between stations. Marine litter was recorded from 301 pelagic- and 624 bottom-trawl catches. In total, 784 visual observations of floating marine debris were recorded during the period. Marine litter was categorized according to volume or weight of material type: plastic; wood; metal; rubber; glass; paper; or textile. Marine litter is observed in the entire Barents Sea and distribution varied with material densities, ocean currents, and water depth. Plastic was the dominant type of marine litter observed at: 72% of surface observations; 94% of pelagic trawl stations; and 86% of bottom-trawl stations (Figure 3.9.6.1.1, Grøsvik et al., 2018). Wood constituted 19% of marine litter observed at the surface, 1% in pelagic trawls, and 17% in bottom trawls. Materials from other categories — metal, rubber, paper, textile, and glass — were observed less frequently.

Pelagic marine litter was observed in 13% of all pelagic trawls with a mean of 58 grammes per trawl catch, and was widely distributed (Figure 3.9.7.1). Plastic formed the bulk (85.1%) of pelagic marine litter observed with a mean of 0.011 mg m-3; paper formed 9.4%; textile formed 3.9%, and was more seldom observed; other materials were only observed sporadically. Pelagic plastic was significantly correlated with latitude and longitude during some years, and indicated northeastern distribution in 2010, and northern distribution in 2011 and 2014.

The Russian Zone was not well covered during the 2018 BESS. As result, only maps of anthropogenic marine litter distribution in the observed area are presented without comparison to previous years or estimation of average weight of litter observed in trawls.
Plastic dominated types of anthropogenic litter observed at the water surface and in both pelagic and bottom trawls (Figure 3.9.7.1, 3.9.7.2). 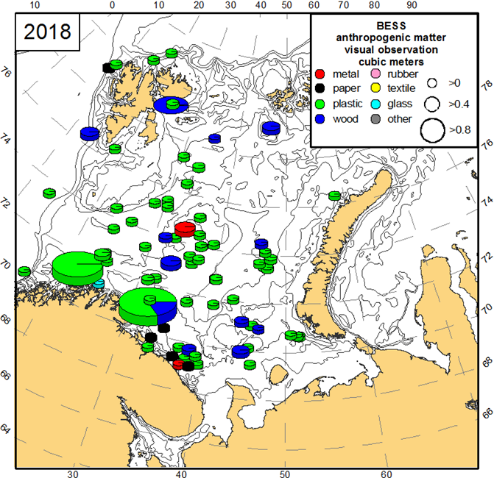 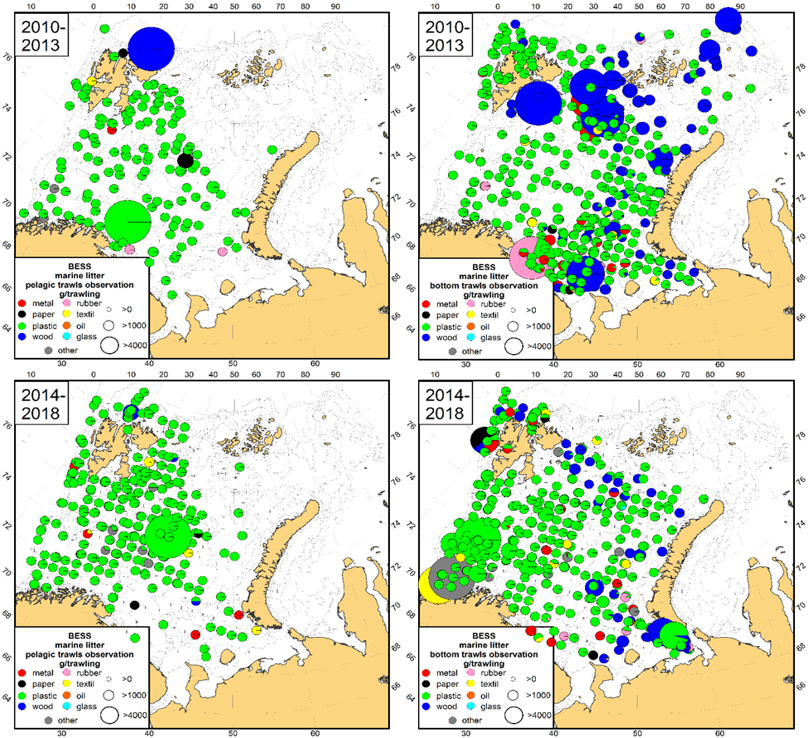