With increasing size, capelin shift their diet from predominantly copepods to euphausiids, (mostly Thysanoessa inermis - not shown separately), with euphausiids being the largest contributor to the diet weight in most years (Figure 4.1.1). Hyperiid amphipods contributed a small amount to the diet of capelin. The stomach fullness is highest in the central and northern areas of the Barents Sea, where the capelin concentrations usually are highest (Fig 4.1.2) 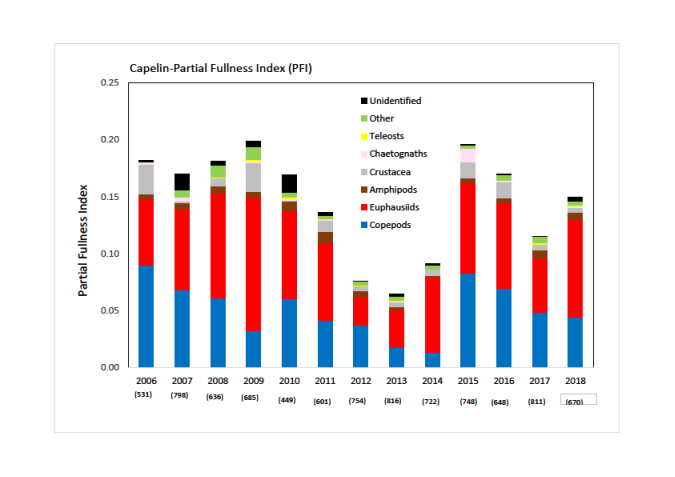 Figure 4.1.1. Stomach fullness (PFI, Lilly and Fleming 1981) of capelin during the BESS survey in August-September 2006-2018. Number of fish sampled each year in brackets. 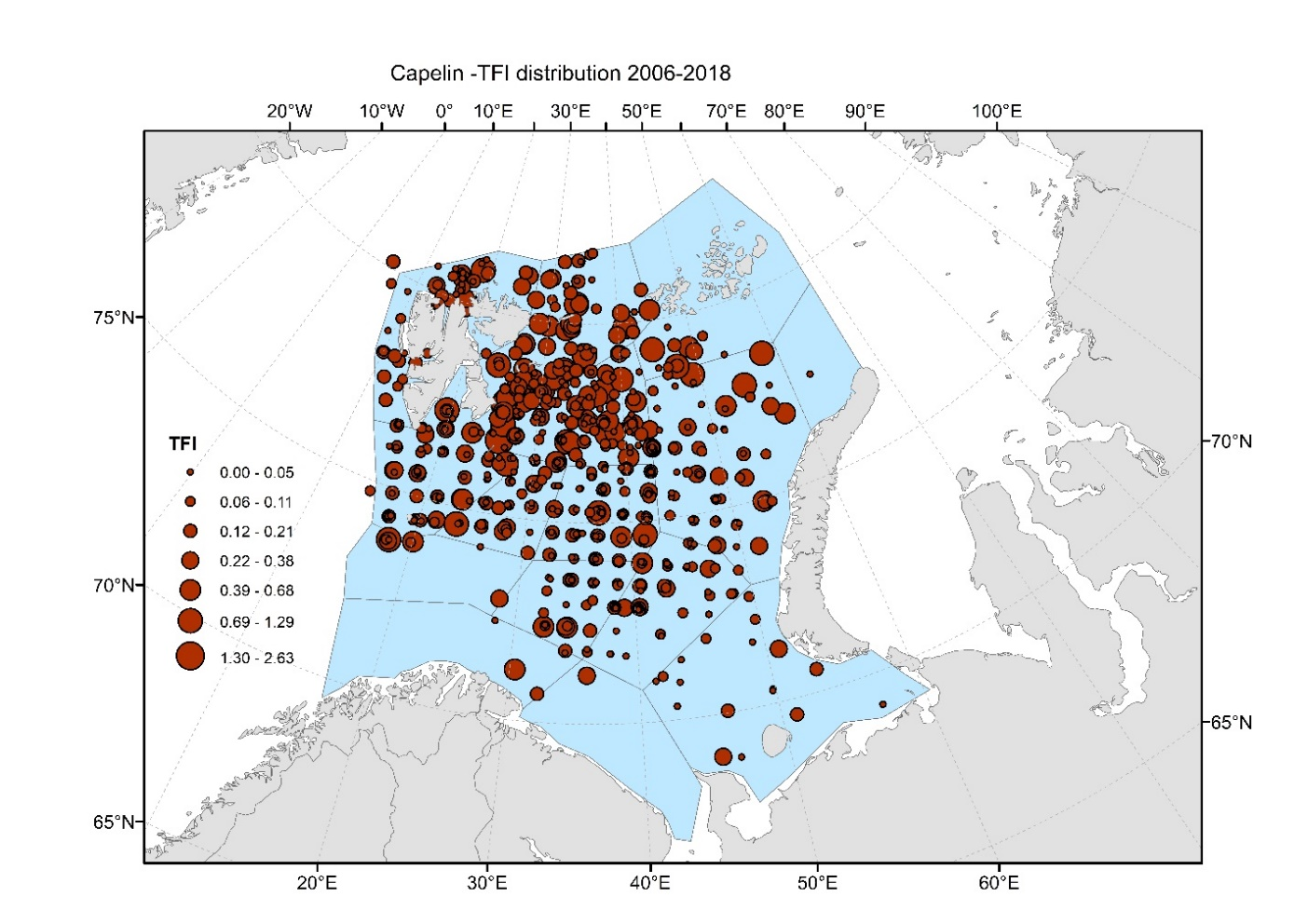 Figure 4.1.2 Geographic distribution of Total Fullness Index (TFI, Lilly and Fleming 1981) for capelin, all years 2006-2018 combined. For polygon areas we refer to chapter 3.

Capelin growth decreased from 2009 onwards in a way similar to earlier periods of relatively high capelin abundance (1990–1992, 1998–2002, Figure 4.1.3). There was a corresponding decrease in stomach fullness of capelin from 2009 onwards. These trends were reversed in 2014-2015 and both weight-at-age and stomach fullness are now at relatively high levels. Note that spatial coverage in the Russian EEZ in 2018 was poor (only 3 stations in that area). The decrease in individual growth rate and condition of capelin observed before 2014 for the large capelin stock may have been caused by reduced food availability linked to strong grazing on the largest planktonic organisms; as suggested by reduction of the largest size fraction (>2 mm) in the Norwegian zone during the autumn survey (see section 3.3). Plankton species composition in the northeastern area has changed; abundance of large copepod species Calanus finmarchicus and C. glacialis (important prey items for capelin) had been decreasing since 2008 and was at a low level, while since 2015 an increasing trend has been observed. In 2017-2018 a substantial increase in both abundance and biomass were observed for large copepod M. longa, which is also prey for capelin as well as for polar cod. At the same time, the abundance of small copepod Pseudocalanus sp., which are not important to the capelin diet, was high in 2012-2015 and have been decreasing since 2016. The same trends were observed in biomass of mentioned copepod species. This change in species composition of the plankton community is most likely caused by the joint effect of warming in the Barents Sea, and high grazing pressure from different plankton consumers. 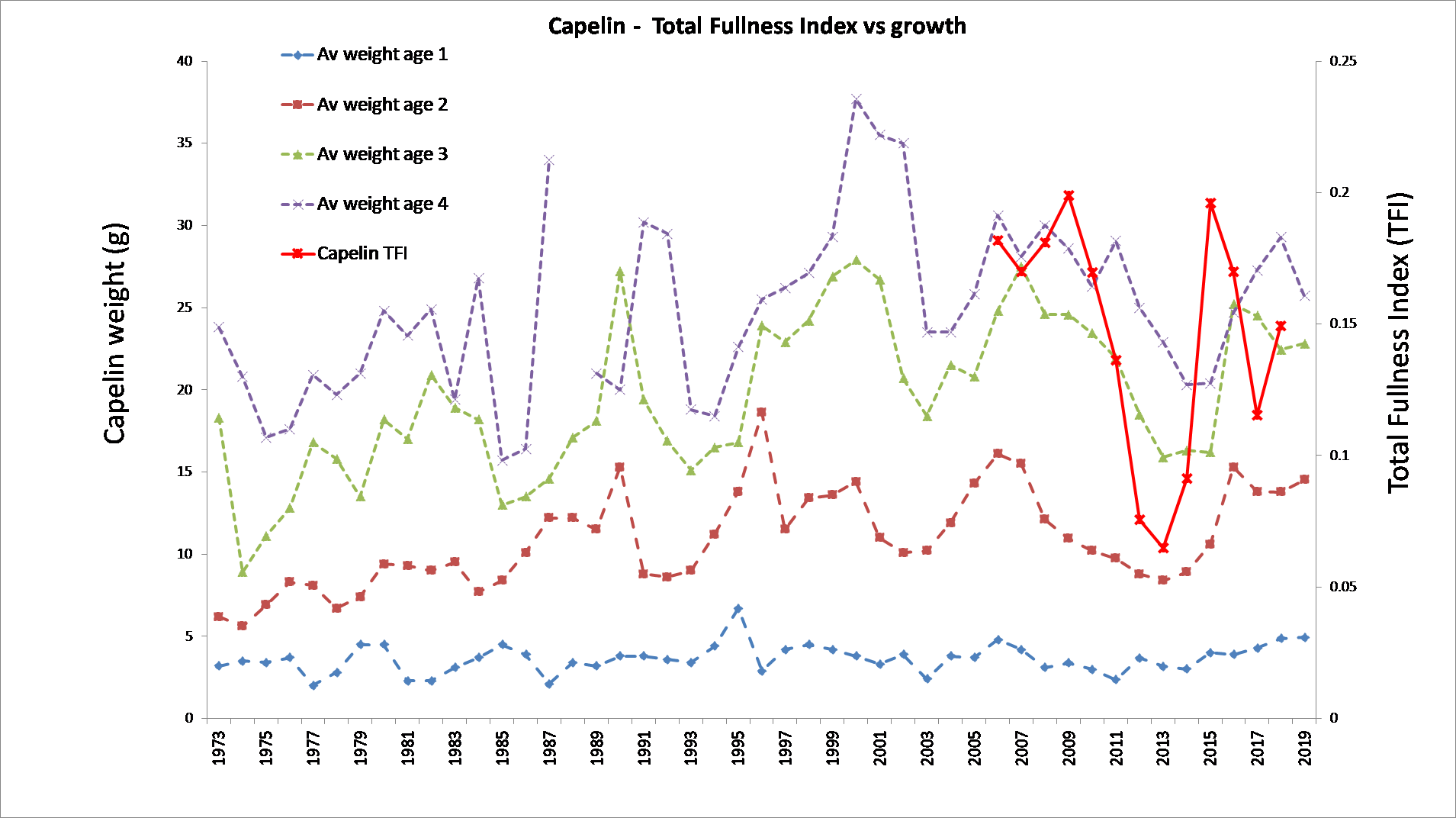 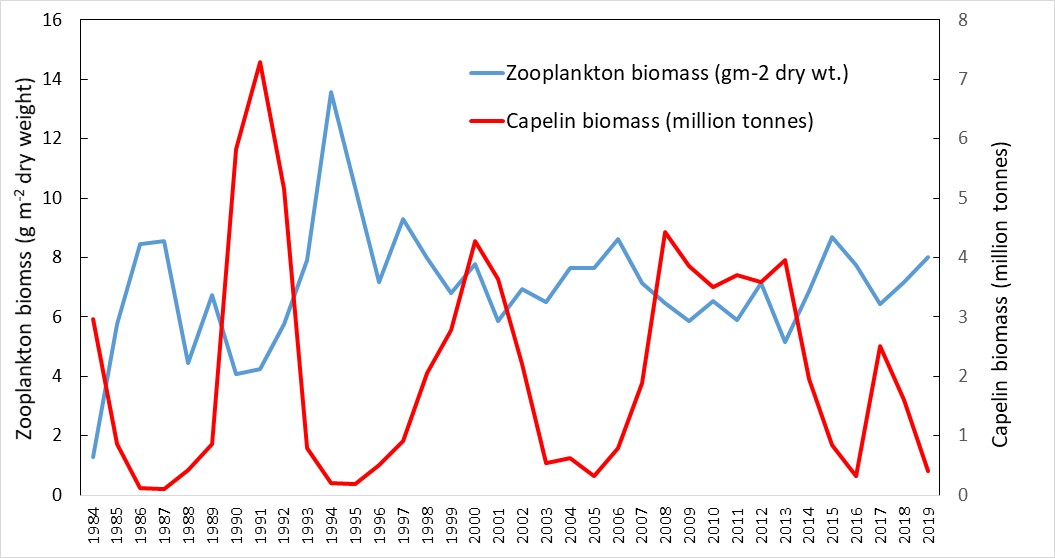 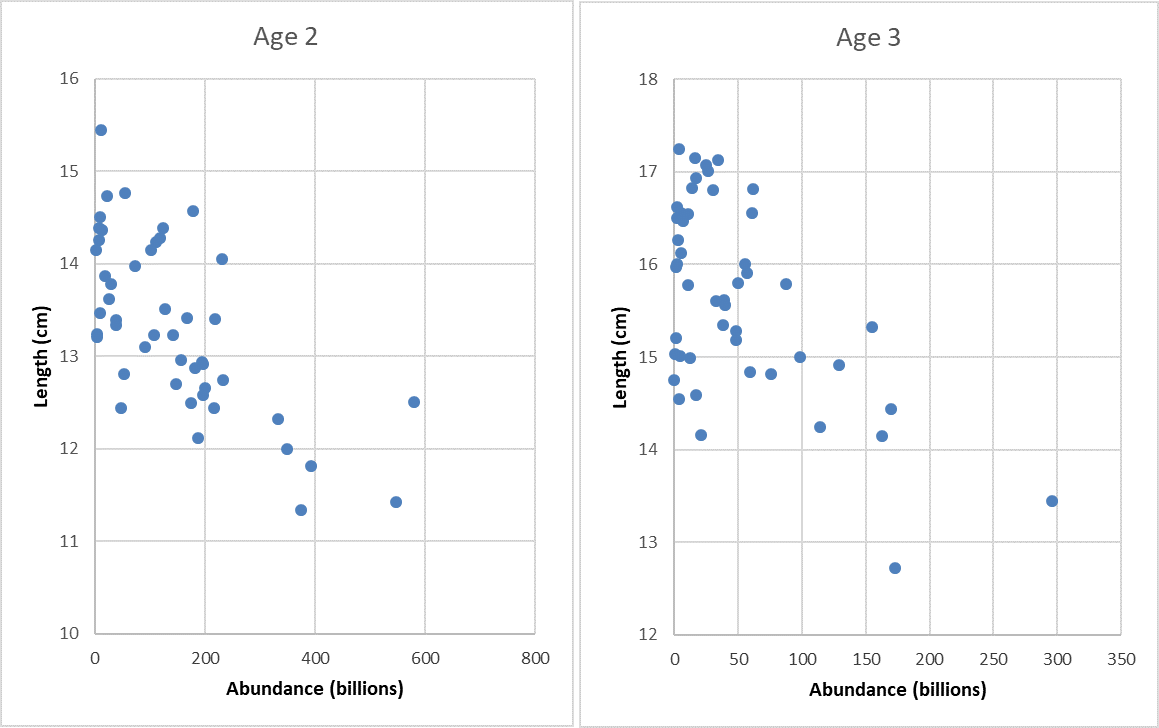 Diet data from 2007–2018 indicate that polar cod mainly feed on copepods, amphipods (mainly hyperiids Themisto libellula and occasionally gammarids), euphausiids, and other invertebrates (to a lesser degree) (Figure 4.1.6). Large polar cod also prey on fish. The total stomach fullness index decreased after 2011 and was at a fairly low level in 2012–2015; the index increased again in 2016 to the highest level measured in this 10-year time-series and remained relatively high in 2017-2018 (Figure 4.1.7). The growth rate of polar cod was low for age 3 and intermediate for ages 1-2 in 2016-2018 (Figure 4.1.8) and, thus, does not reflect the increase in stomach fullness from the 2012-2015 to the 2016-2018 period. It should be noted that spatial coverage for polar cod is incomplete during most years of the BESS; thus, growth and stomach fullness data may not reflect the status of the entire population. The stomach fullness was highest north of Spitsbergen and in the northern Barents Sea. The high proportion of amphipods in the diet especially in 2018, may reflect the high abundances of Themisto sp. in the region east of Spitsbergen. 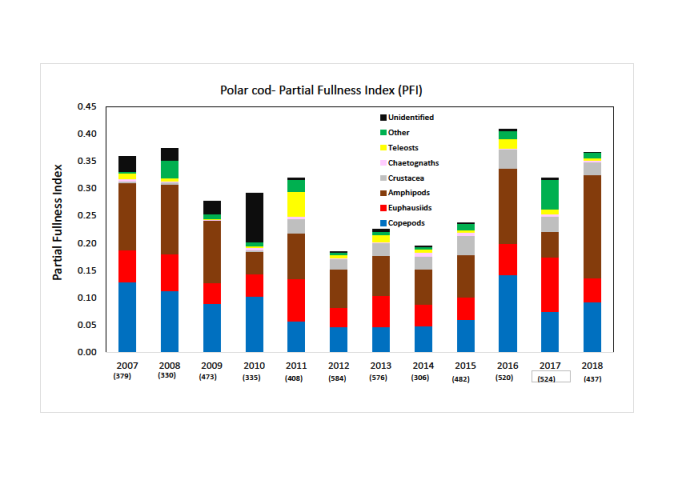 Figure 4.1.6. Stomach fullness (PFI)of polar cod during the BESS survey in August–September 2007–2018. Number of fish sampled each year in brackets. 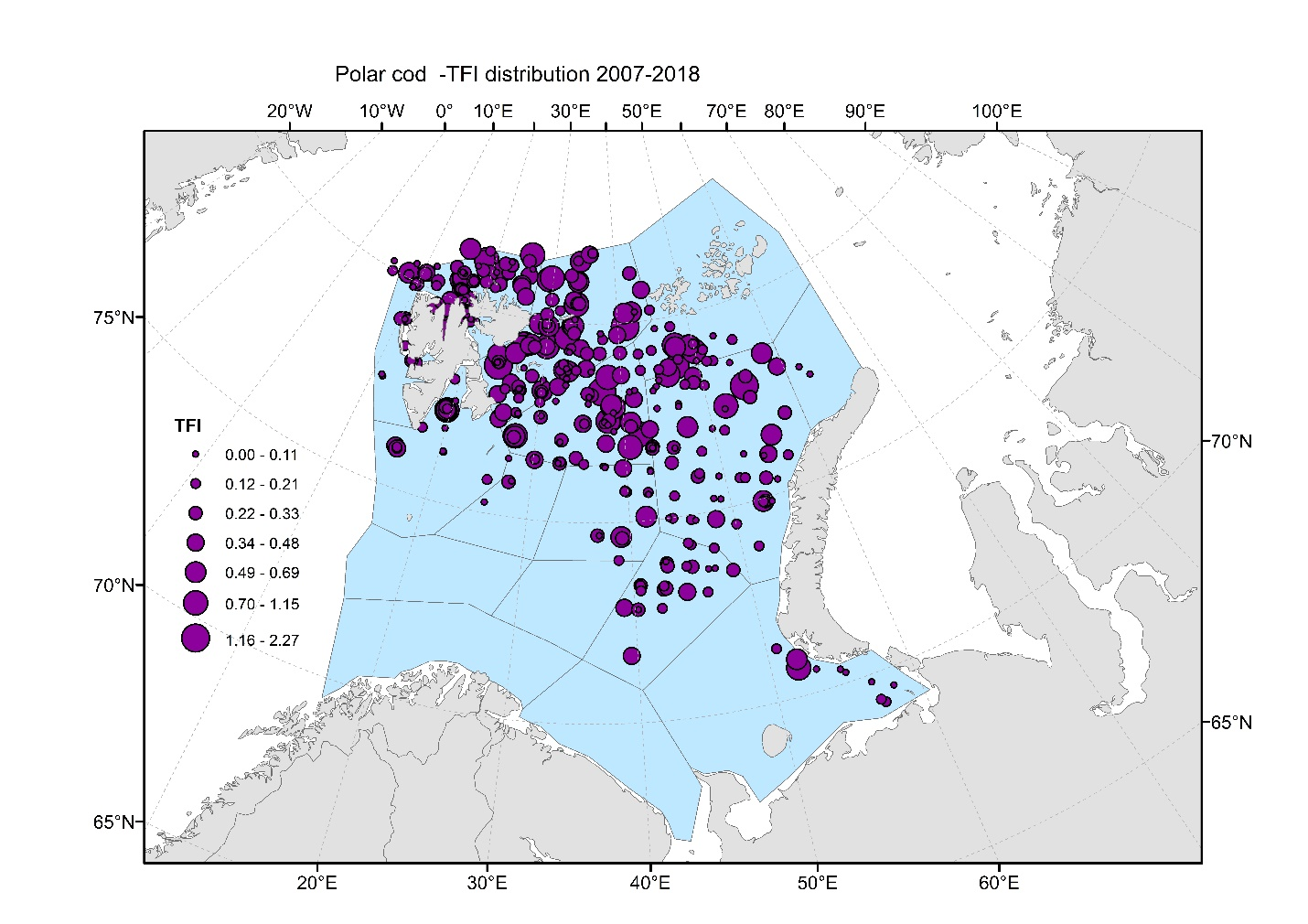 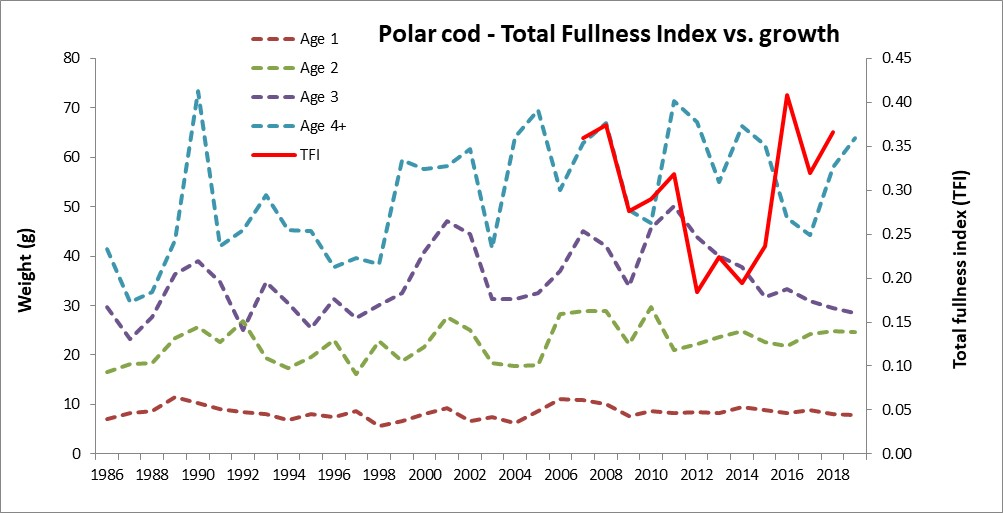 Feeding, growth and maturation of cod 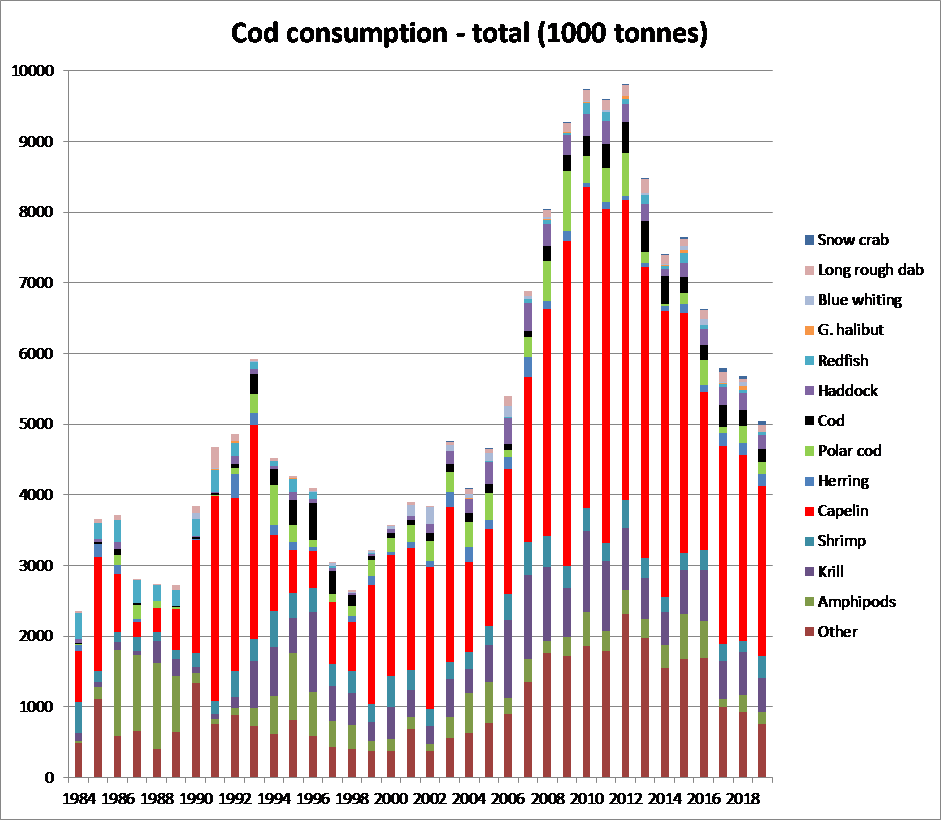 Figure 4.2.1 Cod consumption 1984–2019. Consumption by mature cod outside the Barents Sea (3 months during first half of year) not included. Norwegian calculations, preliminary figures, final numbers to be found in AFWG 2020. 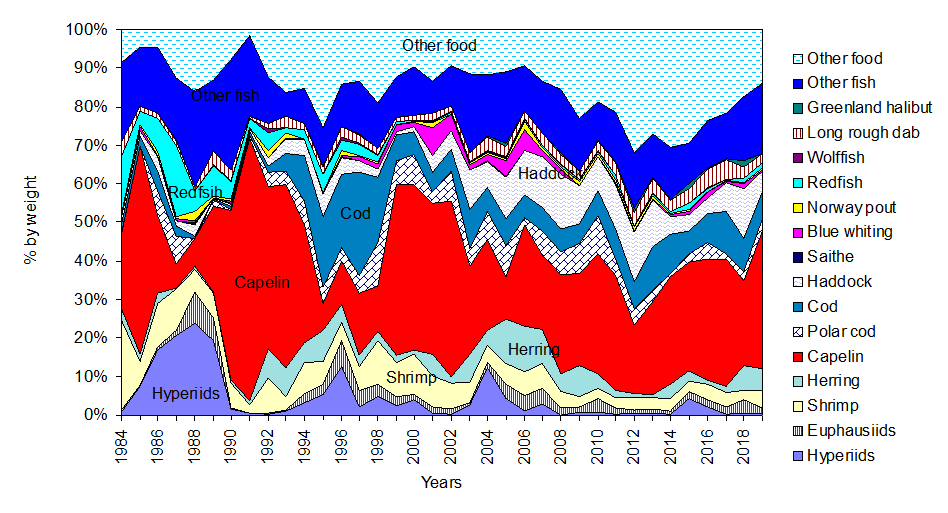 Figure 4.2.2. Cod stomach content composition in the Barents Sea in 1984–2019, by weight (aggregated over all size groups)

Cod is the major predator on capelin; although other fish species, seabirds and marine mammals are also important predators. The cod stock abundance in the Barents Sea peaked around 2013 and have declined since, although it is still above the long-term average. The cod spawning stock and thus the abundance of old, large fish is still very high. Estimated biomass of capelin consumed by cod in recent years has been close and in some years above the biomass of the entire capelin stock (Figure 4.2.3). Abundance levels of predators other than cod are also high and, to our knowledge, stable. 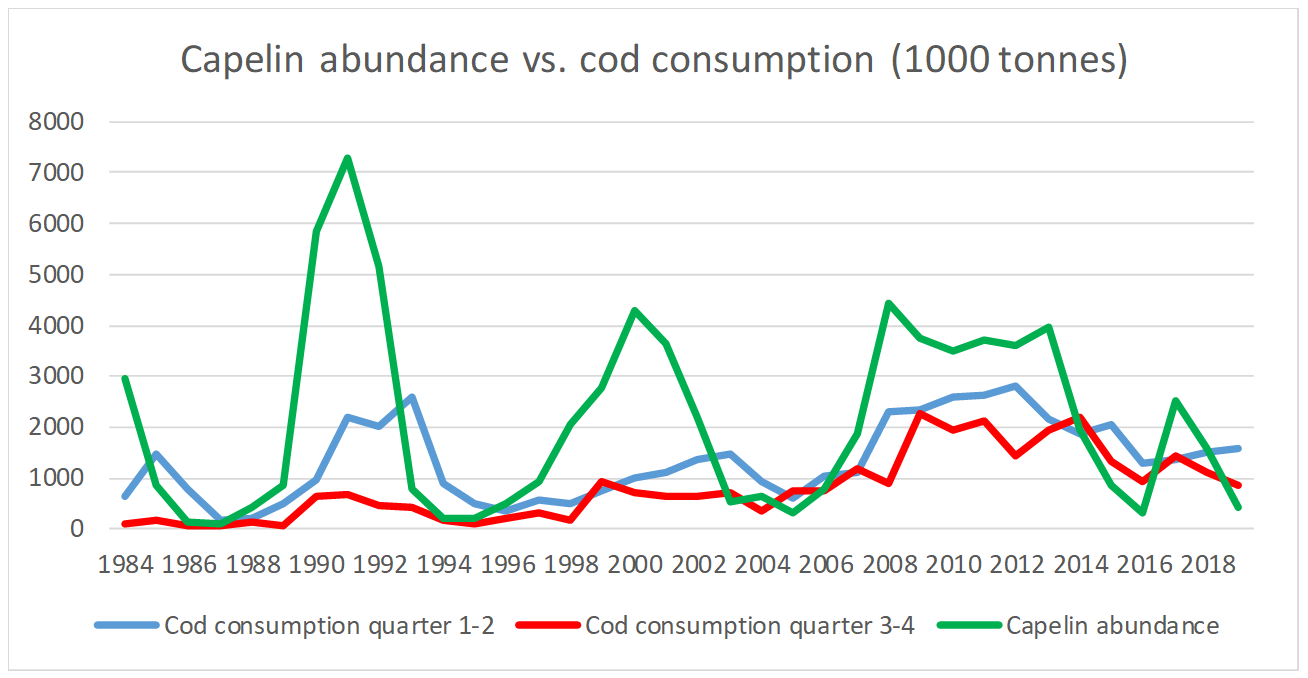 Figure 4.2.3 Size of the capelin stock and estimated consumption of capelin by cod. Note that the capelin biomass is estimated in September and may not be representative for the biomass available for cod during the year when year-to-year variability is high. 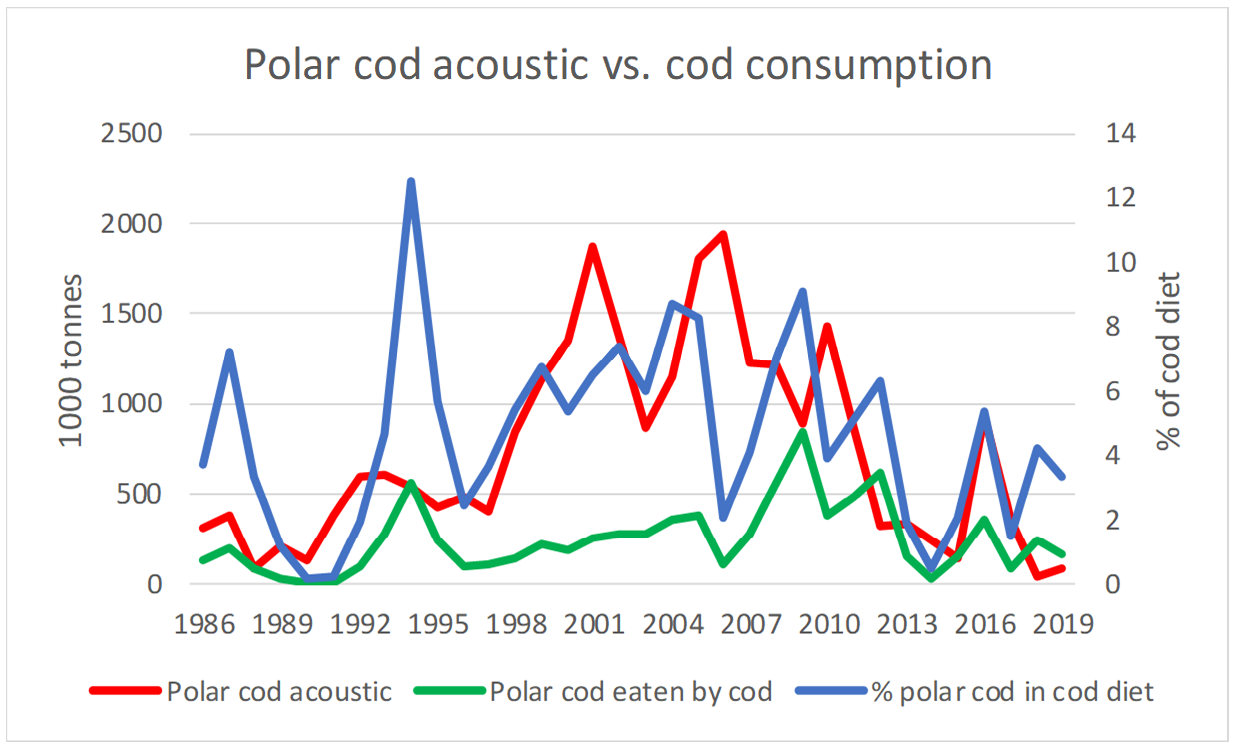 Figure 4.2.4 shows that there generally is a reasonable correspondence between the proportion of polar cod in the cod diet and acoustic estimates of polar cod. The very low acoustic abundance observed in 2018-2019 is, however, not consistent with the recent trends in amount of polar cod eaten by cod. 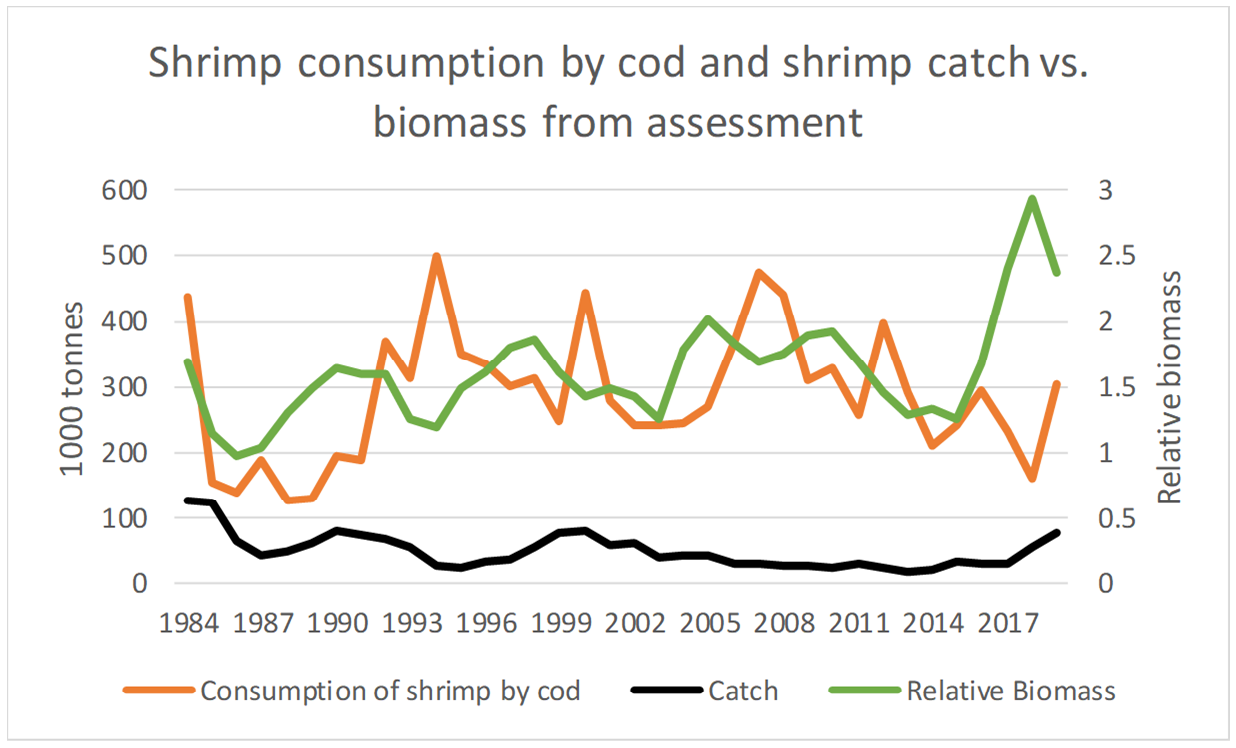 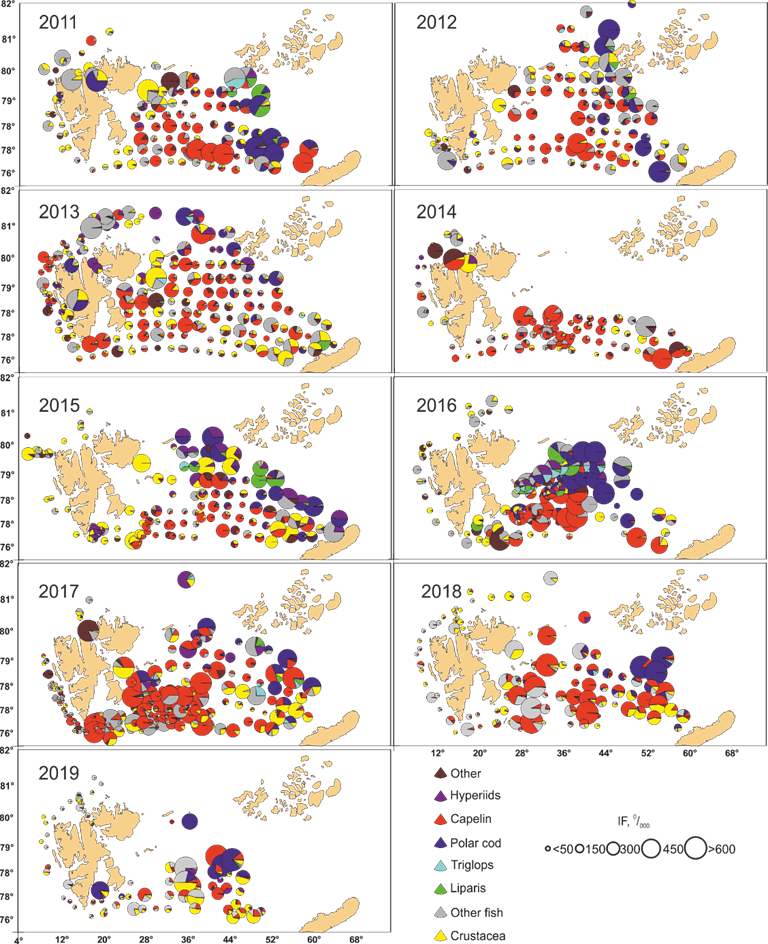 Capelin is the main prey item for cod. High or low stock biomass of capelin affect the biological state of cod. During the first capelin collapse (1985–1989) the importance of capelin in cod diet decreased from 53% in 1985 to 20–22% (maximum) for the remainder of the collapse period. During that period, an increase of other prey was observed; in particular, hyperiids which constituted 7–23% of the capelin diet and redfish which constituted 3–18%. During the second capelin collapse (1993–1997), the proportion (by weight) of capelin in the cod diet was high during the first 2 years (47% and 30%), followed by a decreased to 6–16%. During this period, cannibalism in cod increased sharply from 4–11% to 18–26% of the diet. In addition, more intensive consumption of hyperiids was observed (1–12%), but the proportion of hyperiids consumed was still much lower than during the first collapse. During the third capelin collapse (2003–2006), consumption of capelin by cod was rather high (10–26%). Several alternative prey groups were present in the cod diet in similar quantities: juvenile haddock (6–11%) and cod (5–10%); herring (3–11%); blue whiting (1–5%); and hyperiids (1–12%). Consumption of capelin by cod during the most recent years has remained somewhat stable (17–31%), but has been much lower than during earlier periods of high capelin abundance (average 36–51%). In recent years, a relatively diverse cod diet has been recorded: with stable high consumption of juvenile cod and haddock (6–11 and 5–11%, respectively); other fish species (11–15%); and other food types (21–33%) (mainly ctenophores and crabs). Investigations of cod diet in the area north of 76°N showed different types of feeding intensity in three different local areas (Dolgov and Benzik, 2014). Cod feeding intensity was low (149–1690/000) in areas near western and southern Spitsbergen — where cod feed on non-commercial fish. Other local areas were characterized by high feeding intensity (MFI 214-251-169 0/000) with capelin as dominant; non-target species (snailfish and sculpins), polar cod, and hyperiids were also consumed. These two are traditional areas of cod distribution during summer. The third area (Franz Josef Land, northern Novaya Zemlya, and adjacent areas) has become available habitat for cod only since 2008; in this area, cod (MFI 284-340 0/000) feed intensively on polar cod and capelin. Northward expansion of cod distribution, and their movement into northeastern Barents Sea results in better feeding conditions for cod under their high stock biomass and decreasing of main prey (capelin and polar cod). However, cod intensively fed on capelin and polar cod in 2015-2018 despite their low stocks (Figure 4.2.5). In 2019, consumption of these important prey was much lower and occurred in rather restricted areas in the norther Barents Sea compared to previous years. In addition, some new prey items have recently appeared in the cod diet. The non-indigenous snow crab (Chionoecetes opilio) has become a rather important prey items for cod, especially in for large cod in the eastern Barents Sea alongside Novaya Zemlya (Dolgov and Benzik, 2016, Holt et al., submitted MS). The percentage (by weight) of snow crab in the cod diet sharply increased from 2014 onwards (Figure 4.2.6). In contrast, two other non-indigenous crab species (red king crab and deep water crab Geryon trispinosus) have not become more important in the cod diet. The difference is probably related to higher overlap between cod and snow crab, and more appropriate body shape and size of snow crab than the other crab species as prey for cod. 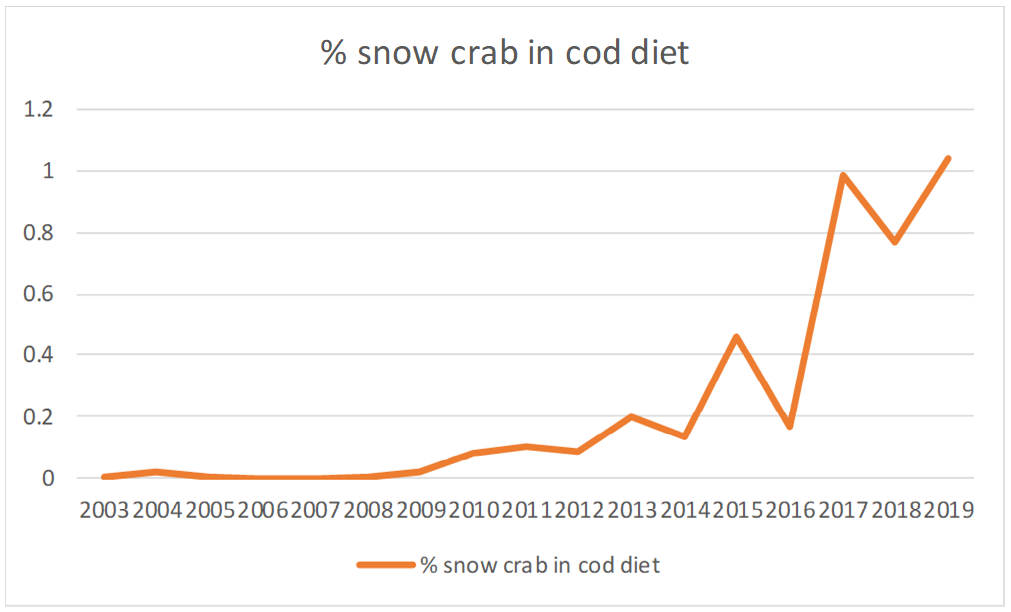 Figure 4.2.7. Importance of snow crab in cod diet (% weight of total consumption) in 1984–2019. Based on Norwegian consumption calculations. 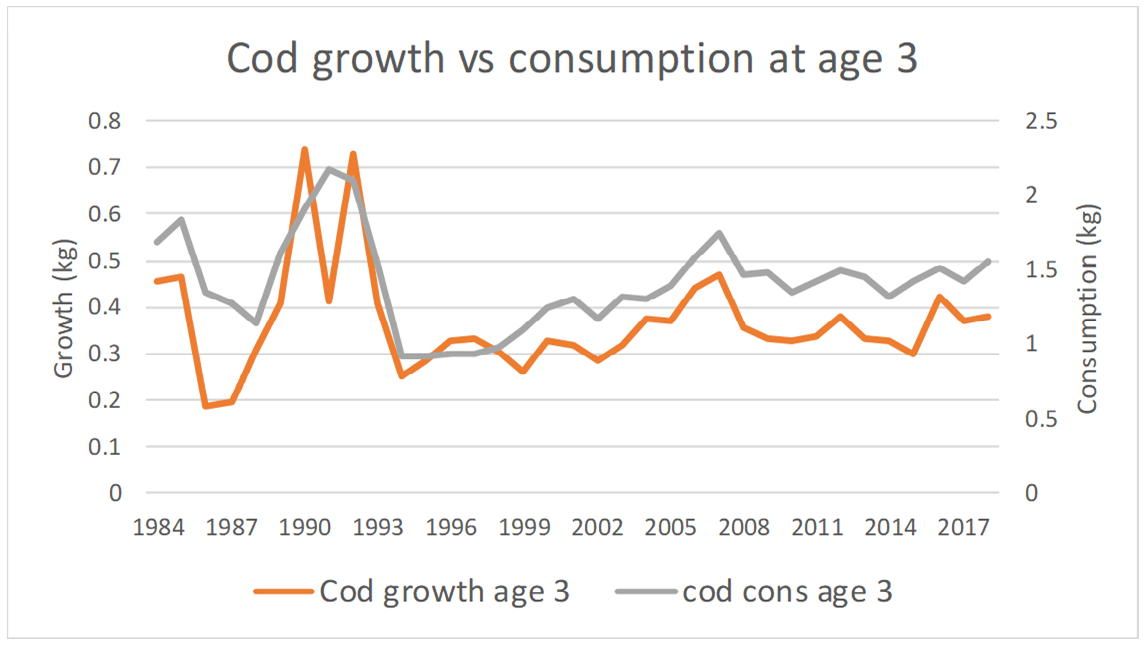 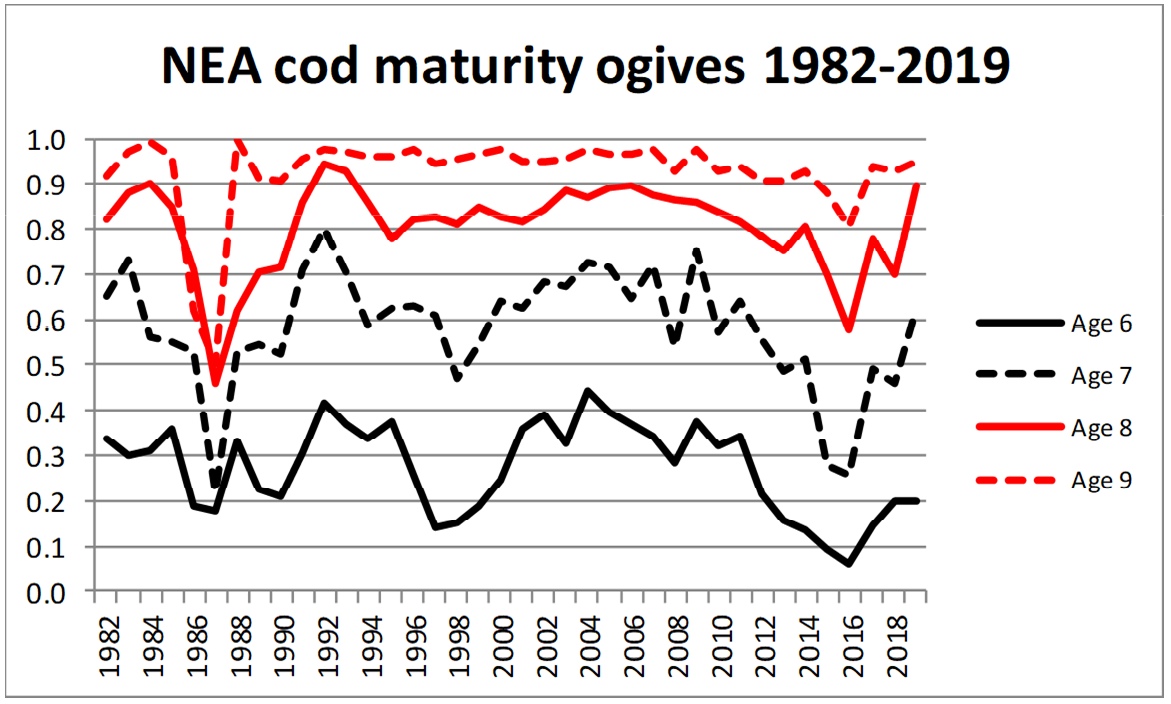