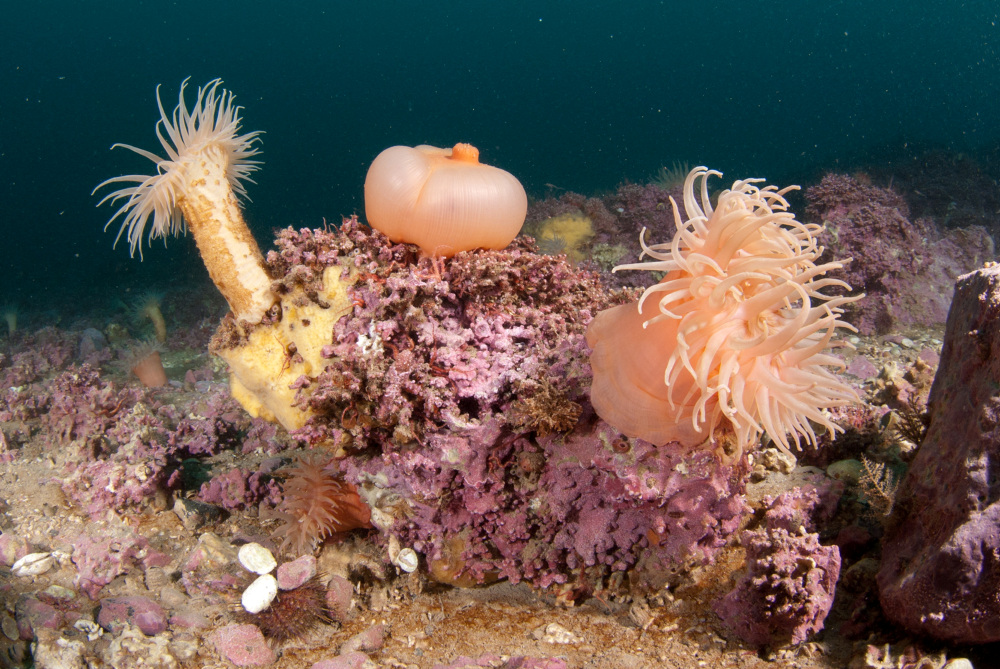 Levels of radioactive pollution in the Barents Sea are low and generally decreasing. The levels in fish and seafood is far below the maximum permitted level for radioactive cesium in food set by the Norwegian authorities after the Chernobyl accident (600 Bq/kg).

The Norwegian routine monitoring of the wreck of the Russian nuclear submarine “Komsomolets” have not revealed any elevated contamination levels in the area adjacent to the wreck. A dedicated expedition in 2019 with RV “G. O. Sars” and the advanced Remotely Operated Vehicle (ROV) Ægir 6000 did, however, confirm that releases of 137Cs from the reactor are still occurring, 30 years after “Komsomolets” sank.

The most important sources for radioactive contamination in the Barents Sea are well known and include global fallout from atmospheric nuclear weapons testing during the 1950s and 1960s, river transport by the Ob and Yenisey rivers of radionuclides originating from Russian nuclear enterprises, discharges from European reprocessing plants for spent nuclear fuel (Sellafield and La Hague) and fallout from the Chernobyl accident in 1986. Additionally, liquid and solid radioactive wastes dumped in the Barents and Kara Seas and wrecks of sunken nuclear submarines represent potential sources.

IMR carries out sample collection for investigations of radioactive pollution in seawater, sediments and marine biota in the Barents Sea every third year. The last sampling campaign was in 2018, when samples were collected from R/V “Johan Hjort” and R/V “G. O. Sars” during the Barents Sea ecosystem survey in August/September. The next sampling campaign will be performed in August/September 2021.

Monitoring of radioactive contamination in Norwegian sea areas is performed within the national monitoring programme “Radioactivity in the Marine Environment” (RAME), which is coordinated by the Norwegian Radiation and Nuclear Safety Authority (DSA). We focus on the most abundant anthropogenic (man-made) gamma-emitting radionuclide cesium-137 (137Cs), but the levels of other anthropogenic radionuclides like strontium-90 (90Sr), plutonium-238 (238Pu), plutonium-239,249 (239,240Pu) and americium-241 (241Am) are also determined in a selection of the samples. In recent years, there has become a growing focus on natural radionuclides like lead-210 (210Pb), radium-226 (226Ra) and radium-228 (228Ra) in the marine environment. These radionuclides are naturally present in the marine environment, but extraction of oil and gas may cause a concentration of these substances. For example, produced water discharge natural radionuclides to the marine environment with activity concentrations of about 1000 times higher than seawater concentrations (NRPA, 2004; Dowdall & Lepland, 2012).

In addition to the three-year sampling cycle, samples of cod (Gadus morhua) are caught along the coast of Finnmark and in the Bear Island area twice a year, and analysed for 137Cs. The results are part of a time series from around 1990. Further, levels of radioactive contamination are investigated once a year the near the wreck of the Russian nuclear submarine “Komsomolets”, which sank in 1989 in the Norwegian Sea 180-190 km south-southwest of Bear Island. Samples of surface seawater (approximately 500 L) and bottom seawater (approximately 500 L) are collected with a CTD-rosette multi bottle sampler with large (10 L) water samplers. Sediment samples are collected with a sediment sampler of the type “Smøgen Boxcorer”. The samples are analysed for a range of radionuclides (e.g. 238Pu, 239,240Pu, 137Cs and 90Sr) at IMR and DSA.

A joint Norwegian-Russian monitoring programme of radioactive contamination in the northern areas was established in 2006. The program is a working group under the Joint Norwegian-Russian Expert Group on Investigation of Radioactive Contamination of the Northern Areas. The expert group is coordinated by Roshydromet on the Russian side and DSA on the Norwegian side. The monitoring program is described and results are summarised in e.g. Jensen m. fl., 2017 and ICES, 2020.

The present chapter summarises results from the last Norwegian sampling campaign in the Barents Sea in 2018. Samples were prepared and analysed during 2019. Results from analyses of 137Cs in sediments, seawater and marine organisms and 137Cs, 40K and 228Ra in sediments are included. Analyses of 90Sr, 238Pu, 239,240Pu and 241Am in seawater have been performed by the DSA, but the results will not be presented here.

Activity concentrations of 137Cs in sediments collected in the Barents Sea in 2018 were below 10 Bq/kg dry weight (dw) (Figure 3.9.11.1, Table 3.9.11.1). These levels are low and comparable to previously reported values (e.g. Skjerdal et al., 2017; Gwynn et al., 2012). Elevated levels of 137Cs are still found in sediments in fjords in mid-Norway, in areas which were heavily contaminated with fallout from the Chernobyl accident. These results are shown in Figure 3.9.11.1 for comparison.

Activity concentrations of the natural radionuclides 40K and 228Ra are given in Table 3.9.11.1. The levels of these radionuclides in marine sediments depend of e.g. the mineralogical composition and grain size distribution of the samples. The levels are comparable to those found in the Norwegian Trench (Dowdall and Lepland, 2012; Helvik, 2019) and in the Baltic Sea (Ilus et al., 2007). Further investigations are needed to explain the observed geographical variations throughout the Barents Sea. 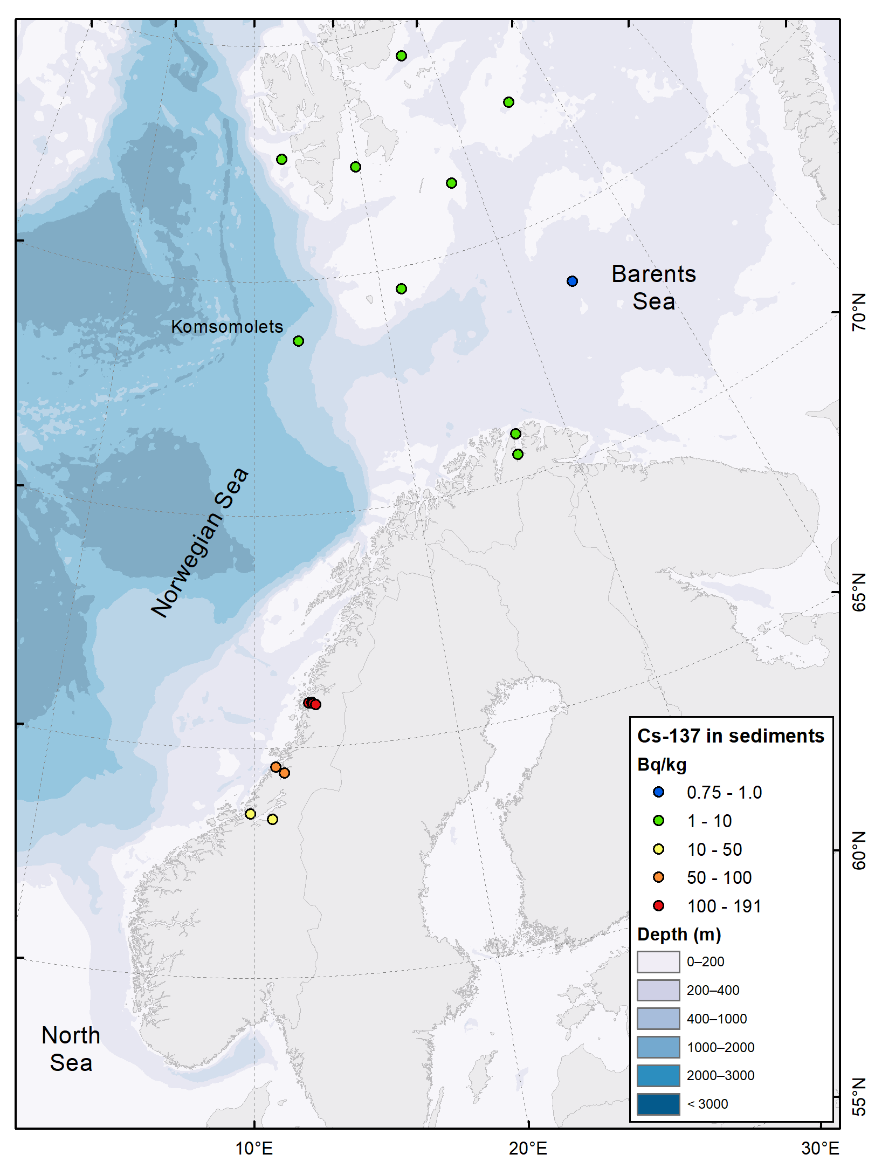 Figure 3.9.11.1. Activity concentrations of 137Cs (Bq/kg dry weight) in sediments in the Barents Sea 2018. Results for samples collected in 2018 close to “Komsomolets” and in four Norwegian fjords are included for comparison (IMR/DSA/RAME).

Levels of 137Cs in seawater in the Barents Sea in 2018 are shown in Figure 3.9.11.2 and Table 3.9.11.2. The levels are low, and the results indicate that 137Cs is relatively homogenously distributed throughout the Barents Sea except for a tendency to somewhat elevated levels in coastal waters along the coast of Troms and Finnmark. In general, levels of 137Cs in seawater in the Barents Sea are slightly lower than levels in other Norwegian sea areas. The higher 137Cs-levels in the Skagerrak are due to the closer proximity to important contamination sources, namely outflowing Baltic water, containing Chernobyl contamination, and the European reprocessing plants for spent nuclear fuel, Sellafield and La Hague. The 137Cs-levels in seawater in fjords in mid-Norway are also somewhat elevated due to Chernobyl contamination (Figure 3.9.11.2). 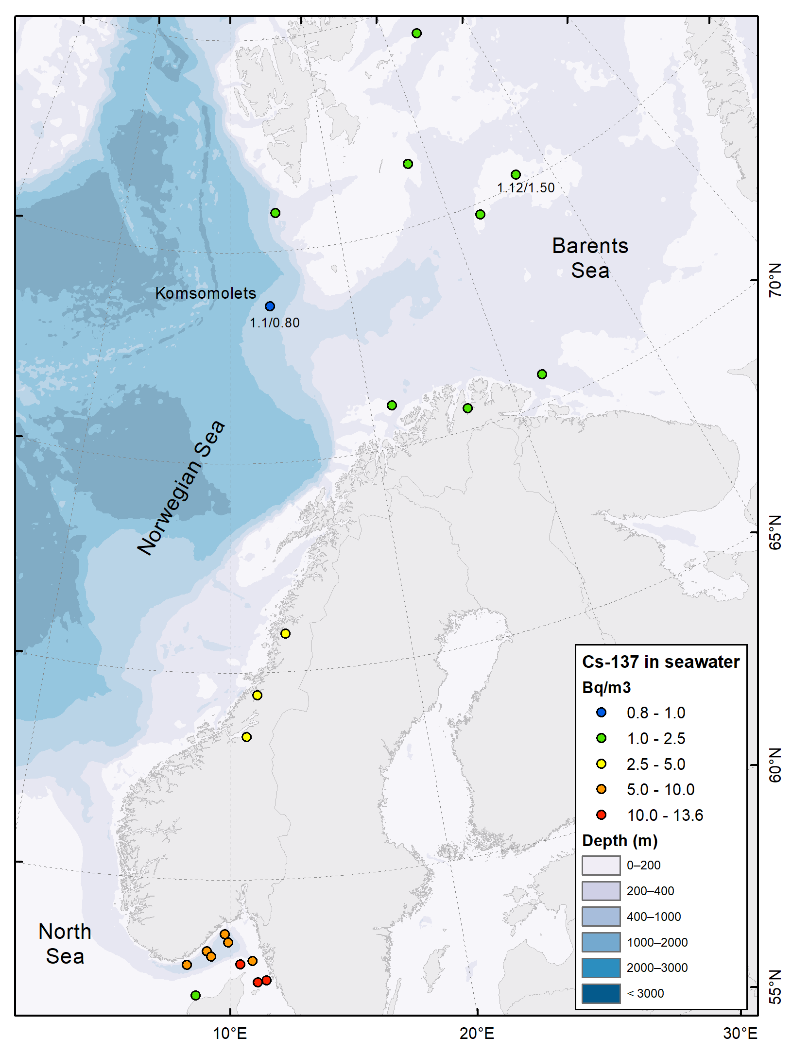 Figure 3.9.11.2. Levels of 137Cs (Bq/m3) in seawater collected in 2018 in the Barents Sea. Results for samples collected close to “Komsomolets”, in four Norwegian fjords and in the Skagerrak are included for comparison (IMR/DSA/RAME). Where two numbers are given, the left hand refers to surface water and the right hand refers to bottom water.

Activity concentrations of 137Cs in common species of fish collected in the Barents Sea in 2018 are below 0.2 Bq/kg fresh weigh (fw) (Figure 3.9.11.3). This is far below the maximum permitted level for radioactive cesium in food set by the Norwegian authorities after the Chernobyl accident (600 Bq/kg fw). To place the results into context, time series of 137Cs in cod along the coast of Troms and Finnmark, and in the Bear Island area from approximately 1990 until present are shown in Figures 3.9.11.4 and 3.9.11.5, respectively. It is evident that the levels have decreased during this period, and the levels in cod in the Barents Sea have been below 0.2 Bq/kg fw for the past ten years. The decrease is due to reduced discharges from Sellafield and La Hague and radioactive decay of pollution from nuclear testing during the 1950s and 1960s and the Chernobyl accident 1986. In addition, the pollution is diluted in seawater over time. 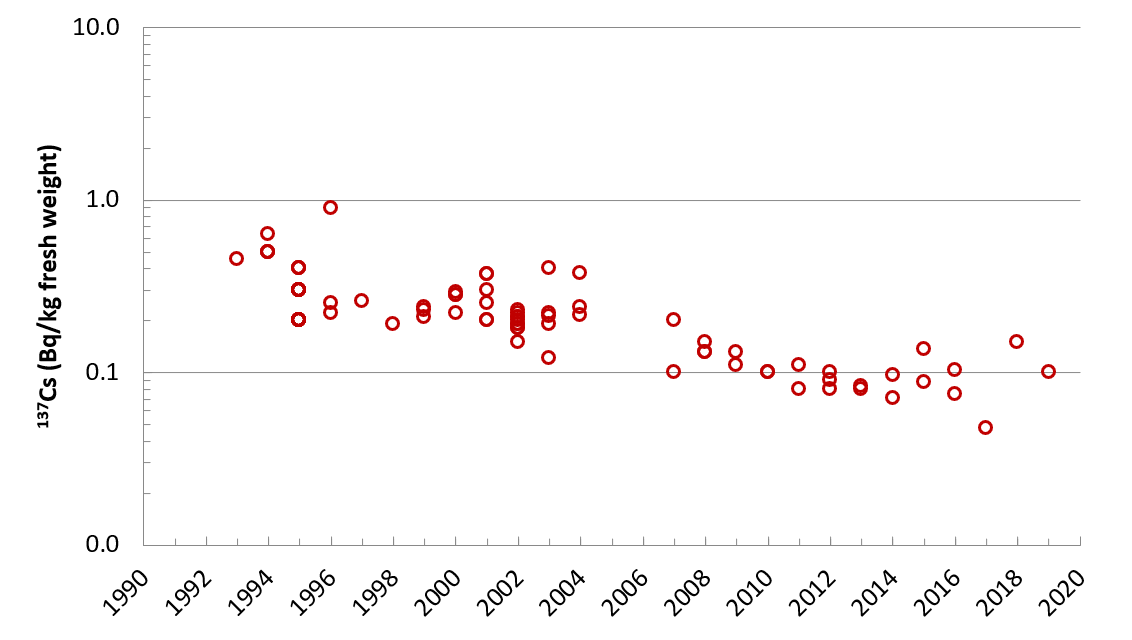 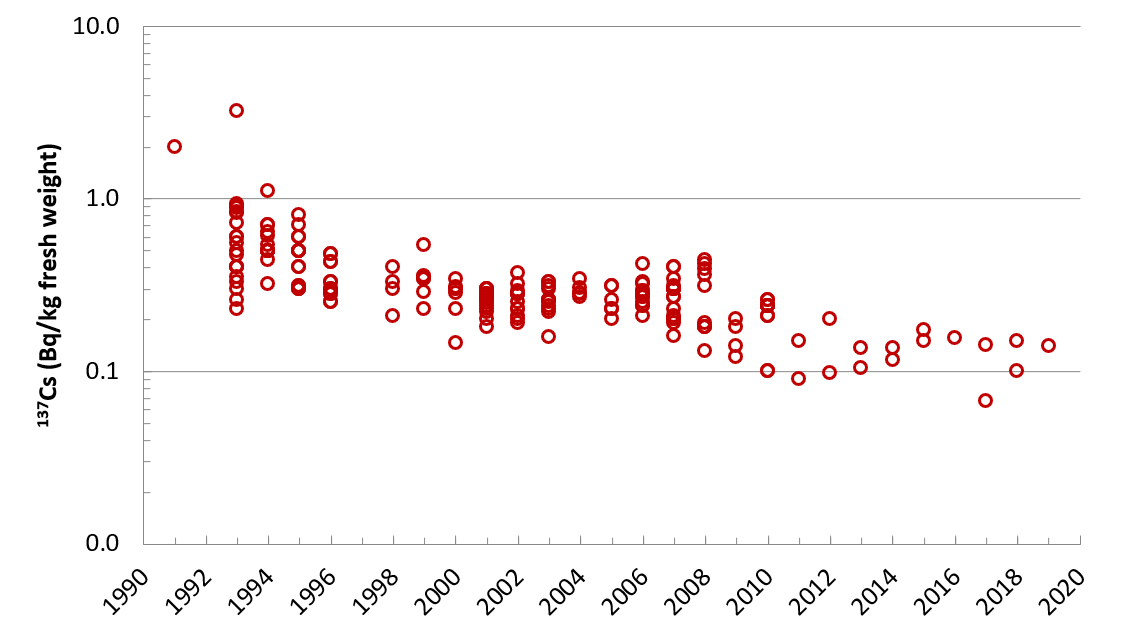 Figure 3.9.11.5. Activity concentrations of 137Cs (Bq/kg fw) in cod caught along the coast of Troms and Finnmark in the period 1991 to 2019 (IMR/DSA/RAME). Uncertainties in single measurements are generally below 30%.

Although “Komsomolets” rests in the Norwegian Sea, it is relevant to include here due to the proximity to the Barents Sea and the fact that it is known to leak radioactive contamination to the marine environment (Nejdanov, 1993; Gladkov et al., 1994; Kazennov, 2010). Despite this fact, Norwegian routine monitoring has not revealed any elevated contamination levels in the area adjacent to the wreck (Gwynn et al., 2018; Figure 3.9.11.6). Since 2013, sampling has been carried out using an acoustic transponder that allow samples to be collected at a distance of less than 20 m from the hull of the submarine. We have not found elevated levels of 137Cs in these samples either.

In July 2019, a research cruise to “Komsomolets” was carried out with RV “G. O. Sars” and the advanced Remotely Operated Vehicle (ROV) Ægir 6000 (Heldal et al., 2019). The expedition was organised under the Joint Norwegian Russian Expert Group for investigation of radioactive contamination in Northern Areas. Using the ROV, the condition of “Komsomolets” was visually documented and samples of seawater, sediment and biota were taken at specific locations in the immediate vicinity of the submarine (Figure 3.9.11.7). Onboard analyses of seawater sampled directly from the ventilation pipe where releases have previously been documented, showed activity concentrations of 137Cs between 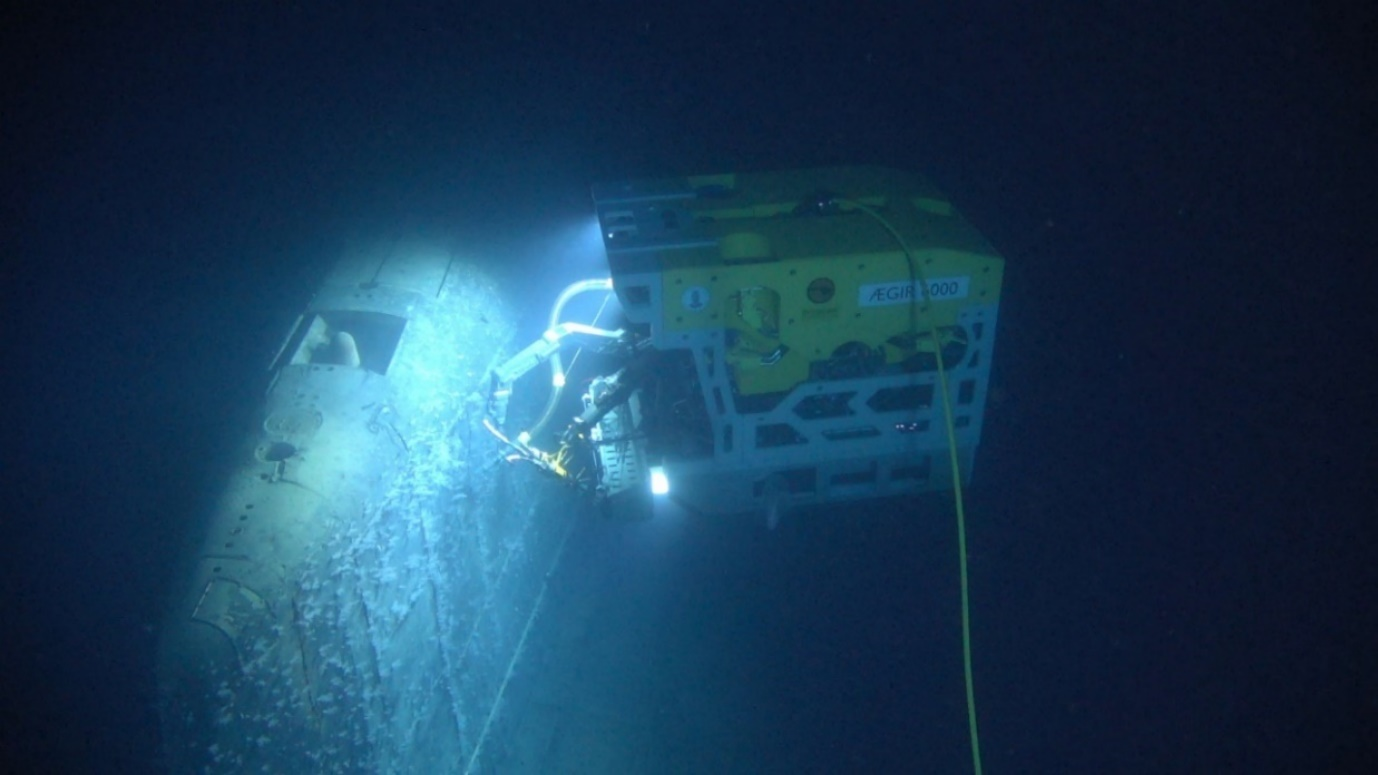