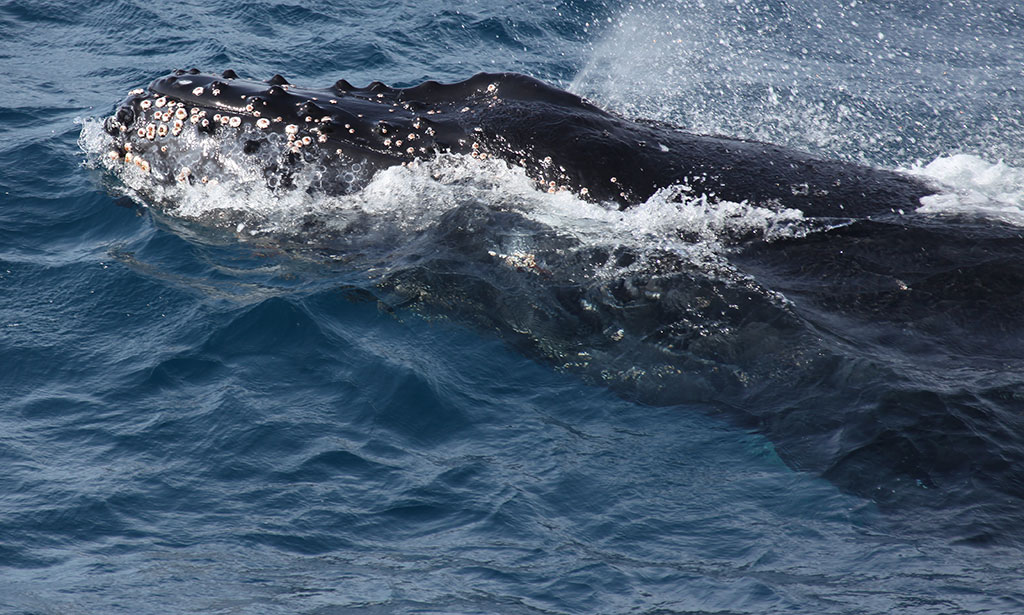 Polar bears, seven pinniped species and five cetacean species reside full-time in the Barents Sea region. Eight additional whale species are regular seasonal migrants that come into the Barents Sea to take advantage of the seasonal, summer-time peak in productivity as the ice retreats northward. Three additional dolphin species are occasionally observed in the southern Barents Sea and sei whales (Balaenoptera borealis) have been observed north of 79° off the west coast of Spitsbergen, but these species is still considered rare north of the Norwegian Sea (Table 1).

The marine mammal community of the Barents Sea and adjacent northern waters represents a vast range of body sizes, from the ringed seal (1.3 m, 60 kg) up to the blue whale (24 m, 100,000+ kg), and displays concomitant variance in life-history strategies and ecology (Kovacs et al., 2009). However, most species feed at relatively high trophic levels, with the polar bear and killer whale being apex predators; although some of the largest baleen whales, such as blue whales and bowhead whales feed low in the food web, at the plankton level, specialising on krill and copepods, respectively. The largest Barents Sea pinniped, the walrus also feeds primarily on small benthic invertebrates in shallow waters (e.g. Gjertz and Wiig, 1992). Other marine mammals in the region feed on a combination of benthic, pelagic and even sympagic (ice-associated) fauna (including both fishes and invertebrates), but schooling fishes including capelin, polar cod and herring are the primary diet of many of the marine mammals in the Barents Sea Region (e.g. Nilssen et al. 1995, Bogstad et al., 2000; Andersen et al., 2004; Labansen et al., 2007). Climate change is having a very marked impact on the fish community in the Barents Sea, resulting in a marked borealization of the region (Fossheim et al. 2015) that will have major ramifications for many marine mammal species dietary compositions in the coming decades. Declines in polar cod alone, will induce considerable change in the diets of many top trophic species (e.g. Haug et al., 2007; Labansen et al., 2007; Lindstrøm et al., 2013).

The total biomass of marine mammals in the Barents Region implies that they play an important role in the structure and functioning of the communities they occupy (Bowen 1997). Consumption estimates for marine mammals in the Barents Sea suggest that as a group they consume 1.5 x the amount of fish biomass harvested by fisheries (e.g. Bogstad et al. 2000, Folkow et al., 2000; Nilssen et al., 2000). However, examples of the impacts of extreme lack of prey, such as the effects of the capelin crashes in the Barents Sea in the 1980s and 1990s illustrate that these top predators do not escape “bottom-up” control completely (Haug et al., 1991; Nilssen et al., 1998); they are clearly impacted by overexploitation of fish stocks or environmental cycles that causes collapses of their prey.

Minke whales and the harp seal are commercially exploited currently by Norway, at low levels compared to their abundances, and ringed seal and bearded seals are harvested at low levels, both in Russia and in Norway. Quotas are set for the commercial harvests, but in the case of harp seals, the take is only a small part of the allowable catch (ICES, 2014). Additionally, there is a quota set for harvesting white whales in the Russian Barents Region by the Fisheries Ministry (N=50 for the White Sea and N=200 for the Barents Sea); this species is protected in Norwegian waters. Coastal seals (harbour and grey seals) are legally harvested by licensed sport hunters in Norway and their numbers are also reduced by bounty hunts in some areas along the Norwegian coast (Nilssen and Haug 2007, Nilssen et al. 2009); the coastal seals are protected in Russian waters. All of the other marine mammals are protected throughout the Barents Sea, both in Norwegian and Russian territories. Non-consumptive use of marine mammals in the Barents Region is dominated by tourism in the wild; this industry has increased rapidly in Svalbard over the past few decades and is also becoming more common within the Frans Josef Land Sanctuary. Small numbers of white whales are taken from the White Sea, within the overall quota set by Russia, for display in aquariums and zoos around the world.

The great abundance and diversity of marine mammals in the Barents Sea area was what attracted the attention of the earliest European explorers to the region. Massive harvests that began in the 1600s targeted various marine mammal species over the next 300-400 years. All of the Great Whales were over-harvested, beginning with the earliest whaling that concentrated on the fat, slow “right whale” family (including the bowhead in the High Arctic). Advances in technology (such as the steam-driven engine, harpoon canons, effective floating mechanisms etc.) resulted in an expansion of the number of species that could be caught effectively. Walruses, seals and polar bears were initially taken largely as a by-catch of northern whaling, but these animals have also been the subjects of significant commercial harvests over time in the Barents Sea and adjacent areas. Harbour seals and grey seals as well as harbour porpoise have been exploited throughout their range by coastal people from early human history in the region, and ringed seals, bearded seals, harp seals and white whales have also been harvested starting as early as the 1400s in coastal areas of the Barents Sea in Russia (Alekseeva, 2008). West Ice harp seals and hooded seals have been the subject of centuries of commercial harvest; though due to precipitous declines in the latter species since WWII, hooded seals are now Red Listed both in Norway and the West Ice quota (Norwegian and Russian hunting area) is set at zero (ICES, 2008; Salberg et al., 2008). Analyses based on the most recent survey in 2012, suggests that the Greenland Sea hooded seal population will likely continue to decline slowly even in the absence of commercial hunting (Øigård et al. 2014). Effects of climate change are likely contributing to this trend. One factor is increased predation by polar bears on harp and hooded seal pups due to the ice edge having moved closer to mainland Greenland in recent years (McKinney et al., 2013). Despite what is, in hindsight, a repeated, tragic history of over-exploitation, the marine mammal community of the Barents Sea region is still rich in species, and some populations, particularly among the pinnipeds, are very abundant (Table 1).

Table 1. Residency status and abundance of marine mammals in the Barents Sea Region. 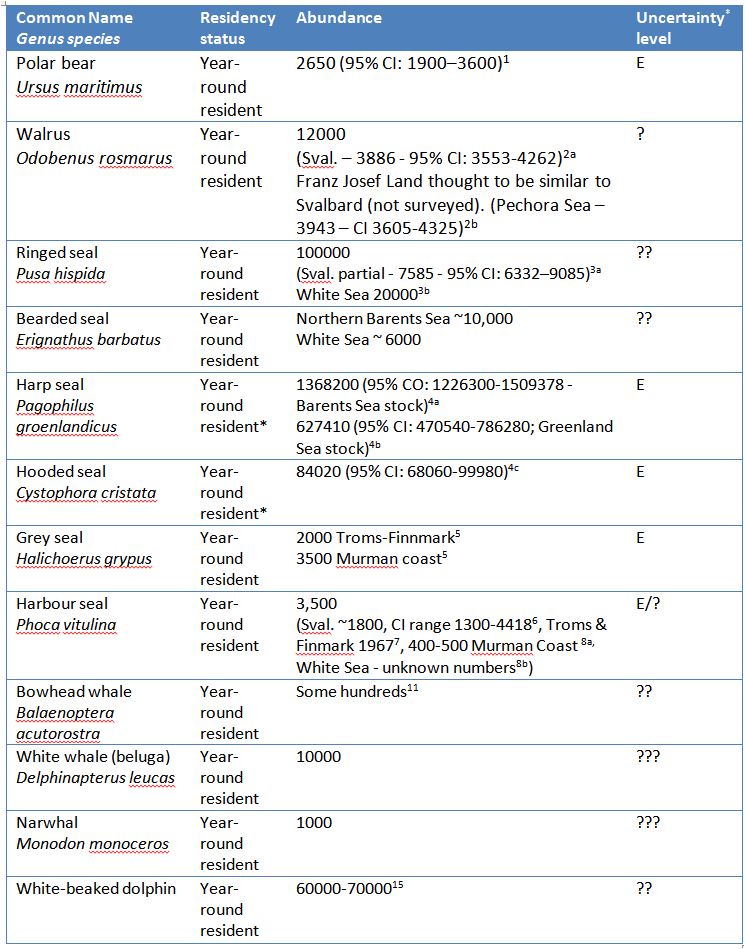 Table 1. Residency status and abundance of marine mammals in the Barents Sea Region. 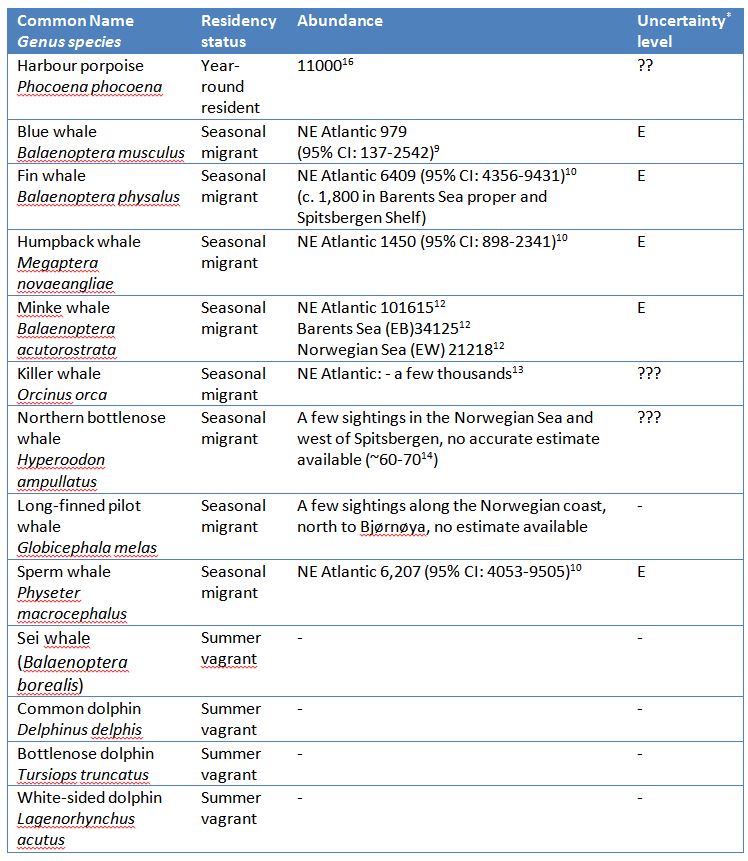 *There is a broad range of uncertainty levels in the assessments of abudance of marine mammal population in the Barents Region: some populations have been assessed recently and completely (E); while many estimates represent partial estimates by region that have been extrapolated to the whole Barents Sea (providing a reasonable ? or somewhat uncertain?? estimate); in some cases there is little or no available abundance data – so the numbers presented represent educated guesses based on sighting records or other non-quantitative estimators (???).
**harp and hooded seals “step-out” of  the Barents Sea for breeding, and in the case of the latter species, some post-breeding, pre-moulting foraging expeditions as well – but some of the population(s) spend much of the year in the Barents Region.