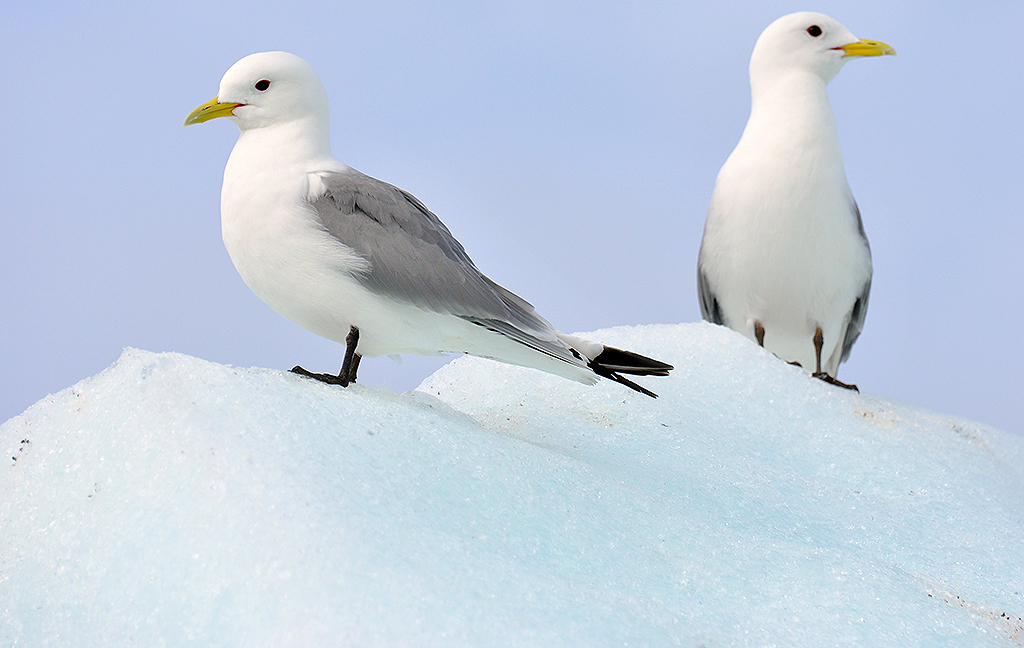 Environmental pollutants from industrialised parts of the world reach the Arctic via air, ocean currents, rivers and sea ice. A wide range of persistent organic pollutants (POPs) and heavy metals have been detected in Arctic wildlife. The levels of the most toxic trace elements (mercury and cadmium) measured in muscle and liver tissue of seabirds from the Barents Sea exceed background levels, but are low compared to those in similar seabird species from

other areas further south. The POPs carried by Arctic seabirds are a complex mixture of many different substances, the bulk of which is made up of polychlorinated biphenyls (PCBs), dichlorodiphenyltrichloroethane (DDT), chlordanes, hexachlorobenzene (HCB) and hexachlorocyclohexanes (HCHs). Brominated flame retardants (BFRs), perfluorinated alkyl substances (PFASs) and polychlorinated naphthalenes (PCNs) are usually present in lower concentrations.

Because seabirds are abundant and because females deposit lipid-soluble contaminants in their eggs (in a manner that reflects their own contaminant burden), seabird eggs can be used as environmental monitoring tools. Long-term time series show that the levels of several POPs in seabirds and their eggs have decreased considerably in the past 10 years. This demonstrates that international agreements banning or restricting the use and release of POPs are having the intended effect. The Stockholm Convention, in which Norway played an active part, is particularly important in this respect. There are however many emerging contaminants (e.g. BFRs, PFASs, PCNs, siloxanes, petroleum hydrocarbons) that show an upward trend. Although the concentrations of these chemicals are currently low compared to legacy contaminants, such as PCBs and DDT, little is known about their toxicity and behaviour in the Arctic marine food web. Furthermore, pollutants that are present in low concentrations may interact and cause more damage than pollutants that are present in higher concentrations.

The glaucous gull is an opportunistic scavenger/top predator that feeds on benthic fauna, fish, carrion, as well as eggs and chicks of other seabirds. Due to their high position in the Arctic marine food web glaucous gulls accumulate high concentrations of a wide range of man-made chemicals that are of environmental concern. For this reason, and because glaucous gulls are abundant in the Barents Sea region, they give valuable information about the geographical and temporal distribution of pollutants, as well as biological effects.

In accordance with time trend estimates of legacy organochlorine compounds in other Arctic marine wildlife species, the concentrations of PCBs, oxychlordane and HCB measured in blood of glaucous gulls have declined with 16-60% during the period 1997-20062. It is of concern however that glaucous gulls exhibit relatively high concentrations of new or emerging contaminants, including BFRs, PFASs and siloxanes.
Many of the contaminant concentrations measured in glaucous gulls from Bjørnøya are higher than those associated with detrimental health effects seen in laboratory animals. Indeed, studies from Bjørnøya suggest that glaucous gulls are negatively affected by pollution. A wide range of effects has been observed, including reduced nest site attendance, changes in egg structure, low breeding success, poor adult survival, high susceptibility to parasite infections, reduced immune function, damage to genetic material  and alterations in energy balance, enzyme activity and circulating hormone concentrations3. The breeding season is an energetically demanding period and it is during this time that glaucous gulls are most vulnerable for contaminant-related stress. Population modelling has recently shown that the dramatic decline in glaucous gull breeding numbers on Bjørnøya is probably due to high contaminant exposure4.

High concentrations of pollutants have been found in eggs of the ivory gull5, a rare seabird species with a population of less than 12 thousand pairs, most of which breed in the Norwegian and Russian Arctic6. Ivory gulls are opportunistic feeders that supply their main diet of polar cod and crustaceans with remains of seals killed by polar bears. As such ivory gulls occupy a top position in the Arctic marine food web. This may be why high contaminant concentrations are detected in their eggs.

Scientists from Russia and Norway collected eggs from four ivory gull colonies in Svenskøya (Svalbard), Nagurskoe and Cape Kluyv (Franz Josef Land) and Domashny (Severnaya Zemlya)5. Chemical analysis showed that the eggs contained various organochlorine compounds, BFRs, PFASs and mercury. Organochlorine compounds were found in the highest concentrations, in particular PCBs and p,p’-DDE. Two chlordane compounds, oxychlordane and trans-nonachlor, were also found in relatively high concentrations, as well as toxaphenes CHD-26 and CHB-50. BFRs and PFASs were present in lower concentrations. Interestingly, contaminant concentrations varied within and between colonies. This may be the result of differences in food preference and/or prey availability. In addition, ivory gulls from Svalbard and Franz Josef Land exhibit a bi-directional migration pattern: westward towards the east coast of Greenland, Labrador Sea and Davis Strait and eastward throughout the Laptev and East Siberian Sea and Chukchi Seas towards the Bering Sea7. However, birds using different migration routes intermingle at breeding colonies. Thus birds present at the same location in summer may be exposed to very different pollutants in winter.

Of all seabirds, the ivory gull may be particularly vulnerable to effects of pollution. Not only is the ivory gull exposed to extremely high contaminant concentrations, it is also challenged by the rapid loss of its critical habitat: the sea ice.

The northern fulmar has previously been shown to accumulate a wide range, and occasionally high concentrations, of organochlorines (e.g. PCBs, chlorobenzenes, DDT- and chlordane-related compounds, dioxins and furans) compared to other seabirds species with a similar diet11. Organochlorines can induce a wide range of biochemical and toxic effects, depending not only on the concentrations in which they occur, but also on elimination processes. Biotransformation is the conversion of chemical compounds to water-soluble metabolites that can be excreted or further transformed. Biotransformation activity can be assessed using the EROD assay. Increased EROD activity was measured in the livers of northern fulmars from Bjørnøya exposed to high contaminant concentrations, in particular dioxin-like compounds. These findings strongly suggest that northern fulmars are affected by environmental pollution12.

The great skua is a top predator in the Arctic marine environment that is also exposed to relatively high levels of pollution. Great skuas breeding on Bjørnøya have been found to carry contaminant loads that are higher than those carried by conspecifics further south (Iceland, Shetland). However, this did not seem to have a large impact on their physiological condition13.