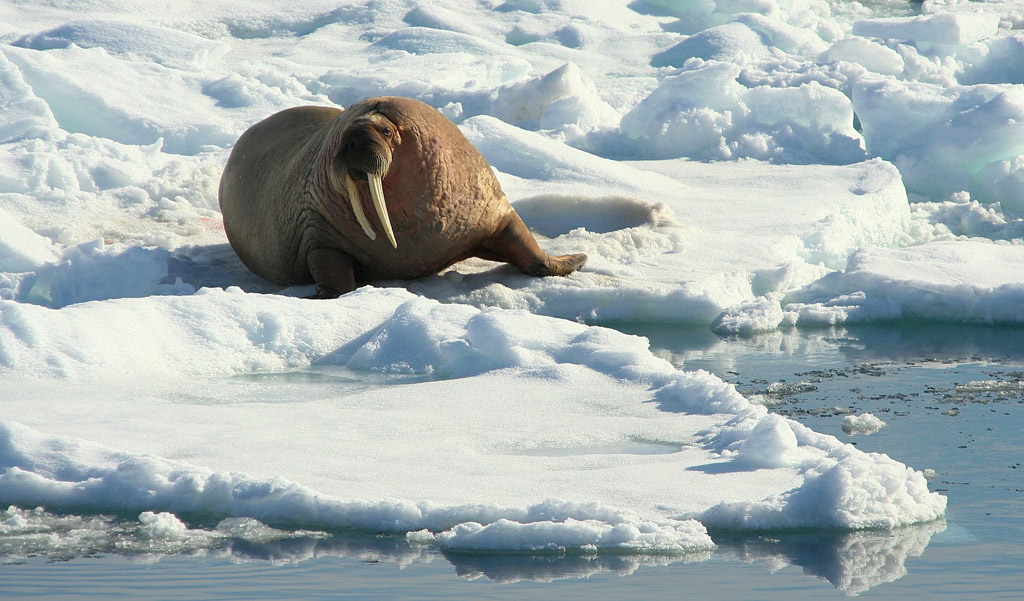 Atlantic walrus is one of the three subspecies. There are 2 other subspecies – Laptev and Pacific, however, lately, separation of Laptevs walrus into a separate group has been questioned. (Linquist et al., 2008). The subspecies is included in the list of rare species in the Red Book of the Russian Federation. Since 1952 walrus hunting is forbidden in Svalbard. The Atlantic walrus is not a CITES object. Walruses in all areas of their European Arctic range were

over-harvested up to the mid 1950s. As a result they were virtually exterminated in several of these areas.

Walruses - the largest representatives of the pinnipeds (Geptner et al, 1976). They have a large massive body, thick skin, covered with wrinkles and folds. The coat of young walruses is quite thick, dark brown. It thins out with age and old animals have a thin, wirely, brownish-yellow coat, with large areas of skin completely devoid of hair. There are two canines in the upper jaw and they are longer and thicker in males than in females. The average body length of adult males is about 350 cm, females - about 300 cm. On hard substrate walruses move slowly, relying on all four limbs.

The Atlantic walrus inhabits the area from the Canadian Arctic in the west to the Kara Sea in the east (Born et al, 1995). Several stocks are distinguished in the range. At least two of them are found in the region: one inhabits northern Barents Sea including Svalbard and Frantz Josef Land, the other occupies southern and southeastern parts of the Barents Sea, northern part of the White Sea, and the Kara Sea (Belikov, 2011).

Basing on indirect data V. Heptner et al. (1976) proposed the following scheme of the Atlantic walrus migrations from the southeastern Barents Sea wintering grounds. In spring-summer period, some walruses follow retreating ice and migrate to northern part of the sea. The others move to the Kara Sea through the Kara Gate Strait or north of the Cape Zhelaniya. In autumn animals return to the wintering area. Seasonal migration of walruses between the Frantz-Josef Land and Svalbard are proved by tracking data from walruses tagged with satellite transmitters (Gjertz and Wiig, 1995). Reproductive biology is not well studied. Mating is believed to be between late January and March-April. The main period of calving lasts about two months with a peak between mid-May and early June (Born et al. 1995). The single calf suckles for about two years. After weaning females stay with groups of adult females, while males usually wander away to join herds of males. Walruses become mature at age of 5-10 years old. Although walruses can prey even on seals their principal food items are bivalves: Mya truncata, Astarte borealis, Serripes groenlandicus and Hiatella arctica (Born et al. 1995).

Until the mid 20th century the population was over-harvested and the numbers were dramatically reduced. Historical population size is unknown. Calculations carried out by Gjtrtz (Gjtrtz et al., 1998) showed that just in the vicinity of FJL, the initial number of the animals was in the range of 6000-12500. After introduction of the hunting ban on Svalbard in 1952 and in the Russian Arctic in 1956, abundance and distribution range in the Barents and the Kara Seas began to recover. This is shown by recent identification of some new haul-outs in the north-west of the Kara Sea – Ushakov and Vize islands with 110-120 animals in each area (Gavrilo, 2010). During the last ten years of the 20th century, population size was estimated to be not less than 2000 animals (Born et al. 1995). In 2006 Norwegian scientists carried out the first aerial survey of the Atlantic walrus on Svalbard (Lуdersen et al., 2008). The calculated results showed that there are about 2600 animals in the archipelago region. In 2011, 2000 animals were registered on the Matveev island. 2000 animals (all males) were also registered on Goletz and Vaigach islands. Current numbers of the Atlantic population is about 20 000 (Kovacs et al., 2004), number of animals in the Svalbard area – 2 600 (Lydersen et al., 2008).

Main threat for the Atlantic walrus is contamination of marine water due to a long-distance transboundary pollution, contaminants transported with oceanic currents, air transport, continental runoff and shipping. Main pollutants are POPs, hydrocarbons and heavy metals. Skin samples, taken from the walruses from Svalbard and FJL rookeries were analyzed for POPs. Animals from the Svalbard region had elevated levels of some of the components - in 2-10 times compared to animals from FJL (Wiig et al., 2000). However, the real risks for the Atlantic walruses are mainly accidental oil spills (Stiansen et. аl., 2008). Another threat is a fishing activity. Apart from possible contamination, it carries the risk of damaging the prey base for the animals with the extraction of bottom biota or damaging the bottom communities during trawling.

There is an urgent need to prevent and (or) to minimize the anthropogenic pressure on marine ecosystems that are inhabited by the Atlantic walrus. Particular attention should be paid to the development of a network of marine and coastal marine protected areas, a better protection for the walrus outside of protected areas, improvement of the legal framework, an interaction of the public and private institutions in the implementation of measures for the conservation of Atlantic walrus. In particular, these measures include:
• development and implementation of a comprehensive system to protect walrus habitats with regard to their ecological importance for the population and vulnerability.
• implementation of restrictions on economic activity in the most important habitats
• education of local population about the need to protect walruses and responsibility for damages caused to them