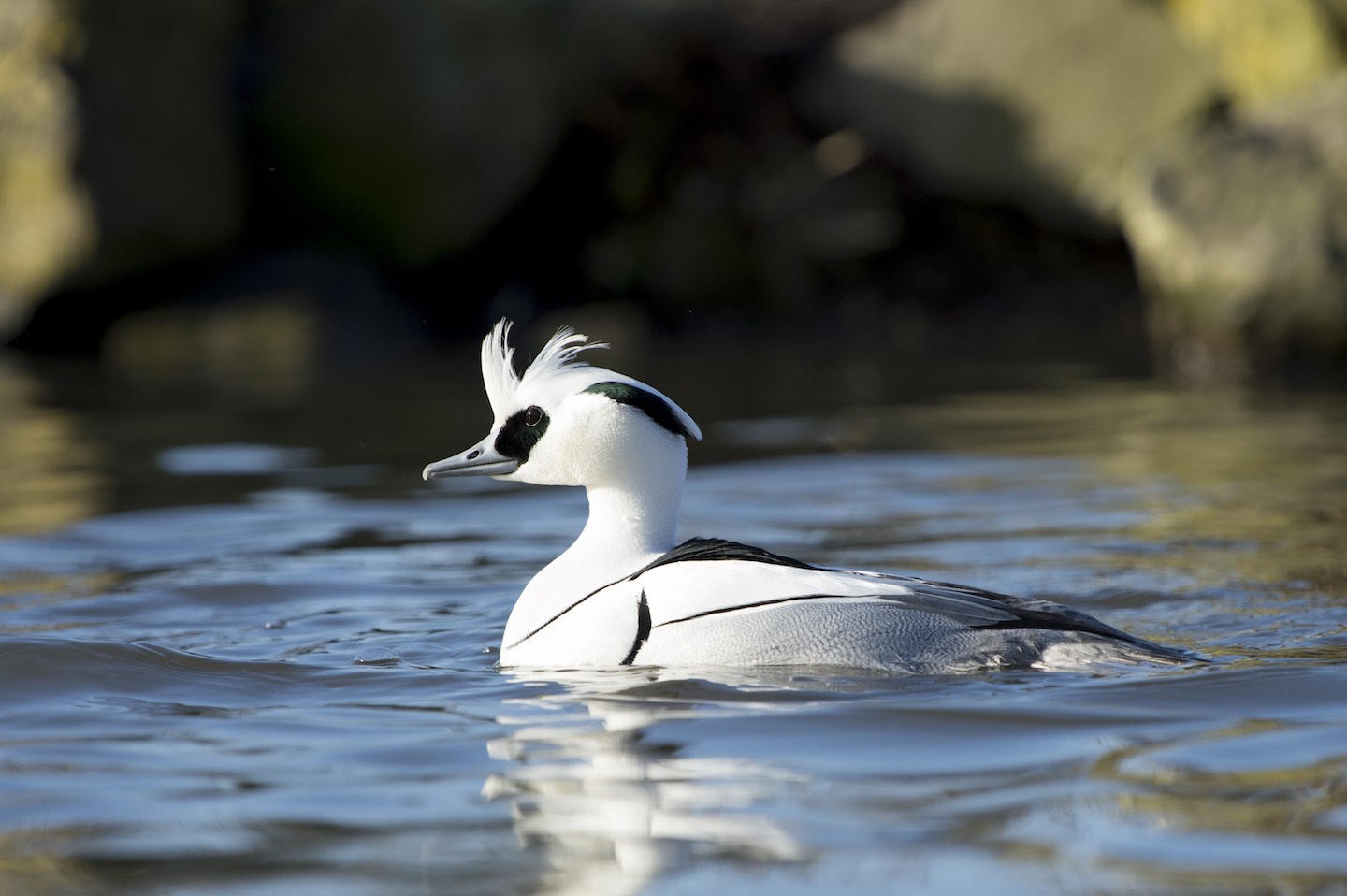 Smew is the smallest merganser duck. The relatively short beak is narrow with a hooked tip and serrated edges. The body length averages 40 cm. Wingspan for males are about 60 cm. The male in the breeding plumage is white with some black markings on its head and back. It has oval white wing-patches in flight. A female has chestnut colored forehead and crown, gray upper torso, light cheeks and white lower part of the body.

Taiga region of Eurasia. Breeding range covers the northern part of Eurasia from Scandinavia to the lower reaches of the Anadyr river. Because of its small population, the duck inhabits the area in a patchy fashion, also outside the range. In the Murmansk region, it lives on the edge of the breeding range, inhabiting the taiga part of the territory. Nesting in the eastern part of the Kola Peninsula has not been verified. It nests in Finland, Scandinavia, near the taiga lakes in Karelia and the Arkhangelsk region.

It prefers small rivers, lakes and shallow bays of larger rivers and lakes, reservoirs with underwater and surface vegetation and with hollow trees along the banks.

Feeds on insects and aquatic invertebrates in the summer, and on fish in the winter. It prefers undisturbed areas. Starts nesting at the end of the second year of life. Settles in tree cavities and artificial nests, competing with the common goldeneye (Bucepahla clangula). Arrives to the north of Fennoscandia, Kola Peninsula, Karelia and Arkhangelsk region in late April - May and starts nesting in the first half - mid-May. It usually lays 6-8 eggs. Two females often lay eggs in one nest. Sometimes smew females lay their eggs into the nests of goldeneye, but more often female goldeneye lay into smew’s nests. Incubation lasts about 30 days. Smew’s chicks are very similar in color to goldeneye chicks, but have a narrower beak. Most of the chicks hatch in the third decade of June.

Low numbers throughout their range. Sometimes up to 20 pairs and above nest within the Murmansk region in Lapland Nature Reserve, in the islands of the Kandalaksha Reserve, and in Pasvik Nature Reserve on both sides of the Pasvik River. They rarely occur in other places. The total number increased slightly around year 2000, but varies insignificantly (Bianki, Gilyazov, 2014). There are less than 0.5 pairs per 1000 hectares grounds in Karelia on Paanajarvi; in the Kostomukshskiy Reserve an average density of 0.2 pairs per 1,000 ha, and about 0,1 couple per 1000 hectares on the islands of the reserve in the Kandalaksha Bay. The annual variation is 2-10 pairs on the islands of the Kandalaksha Reserve. In Norway they have the status of VU, and they are extremely rare in the mountain area; their status in Sweden - NT. In the Republic of Karelia and the Murmansk region - rare, type 3 (VU). They are relatively common in Finland, but few in number.

Decline of old growth forests with hollow trees due to felling and fires. Competition with the goldeneye for nesting locations. Pollution and economic development of the territory. The devastation and destruction of nests and chicks by Mustelidae. Although hunting is not common, they can become an easy prey for hunters as a result species credulity.

Occurs in the reserves of the Murmansk region. Measures are needed to protect nesting sites along the riverbanks, perhaps, putting up artificial nests.