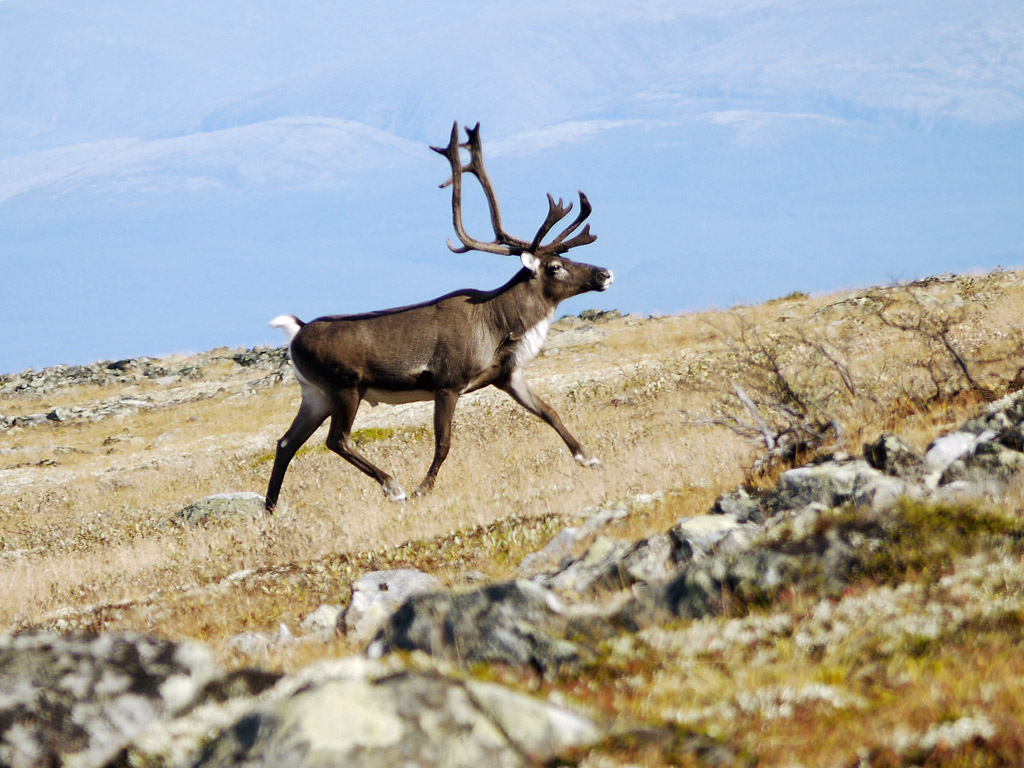 Deer from different subspecies groups differ in color, shape and size of antlers. The size and weight also vary a lot. In general, an adult male can weigh up to 200 kg or more. Females are much smaller. The weight and body size depends on the sex, age of the animal, the season, the availability of forage, degree of anxiety. In the summer, the body color is dark gray-brown. Abdomen, inner side of the limbs are white. Winter coloration is lighter. A horizontal

The species is widespread in the Northern Hemisphere in Europe, Asia and America. In the Barents / Euro-Arctic region it is not a single area. There is no wild reindeer in the Swedish and Norwegian parts of the Barents region, except for the Svalbard archipelago. In Finland, the preferred habitat of the wild deer is in the central part of the country near the border with Karelia - in the area of Kuhmo, and in the Kainuu region. In the Murmansk region, since the beginning of the twentieth century, there are two populations of wild deer: A western population in Lapland Reserve and adjacent areas and an eastern population in Tersky district. The distribution in Karelia is patchy, the greatest density of animals is observed in the northwest region. In the Arkhangelsk region, there is also the north-western and the eastern population. In the Komi Republic the situation is more favorable: the deer is distributed broadly in the less developed areas. In the Nenets Autonomous District there are almost no wild deer. Small herds are adjacent to the north-eastern group of the Arkhangelsk region.

Herd animals, depending on the season, and in search of new pastures roam to different habitats. Due to large differences in environmental conditions, wide variety of habitats are used. In the summer, because of the abundance of midges, deer tend to go to windy places - up in the mountains, on the banks of ponds and marshes; in the winter - prefer to keep to the lichen pine forests, on wetlands, and at the end of winter, in the period of high snow - ascend to the mountainous tundra.

The range of food items is extensive for the species. The main winter forage - terrestrial lichens (moss). At other times, they eat grass, twig food, mushrooms. By winter, they aggregate into large herds and move into lichen forests, on the ice of lakes, climb to the mountainous tundra. By spring herds break up, females go to calving places. By the time of the rut, "harems" are created, where several females walk with one male. For the existence of a deer, it is important to maintain the proper structure of the herd. Most dangerous for the species are wolf, wolverine and bear. The rut takes place in September-October, the female gives birth in May, one or, very rarely, two calves. Both sexes have antlers.

Over the past 50 years in Russia, the highest number of reindeer was observed in the 70th and reached 90 thousand individuals. In the mid-80s the number of deer began to decline, and habitat split into individual pockets. Due to anthropogenic impact and natural reasons, species abundance has declined 4-fold by the first decade of the twentieth century (Efimov, 2010). According to expert evaluation the total number of reindeer in the Barents region was estimated to be within 20 -22 000 individuals. Spitsbergen is home to about 2,500 animals. In Finland, there are about 1000 individuals. In the west of the Murmansk region there is about 1000 and in the south-east about 5000 individuals (Makarov, 2014). The number of deer in Karelia is currently in the range of 3000 individuals (Danilov, 2007; Panchenko, 2010). The population of Novaya Zemlya reindeer is considered as recovered. Its population reaches 5-6000 animals (Korepanov, 2008). The total number of wild deer in the mainland part of the Arkhangelsk region is not more than 1500, and the number of wild deer in the Republic of Komi is 3500-4000 (Korolev, 2014).

Wild reindeer is a socially important species. But despite this, it remains a poorly studied species, especially in the systematic manner. Monitoring is carried out irregularly, especially in the eastern part of the Barents Region. Therefore, international cooperation in the study of populations of the deer is one of the key measures aimed at preserving and restoring the size and range of the deer in the Barents Euro-Arctic Region.