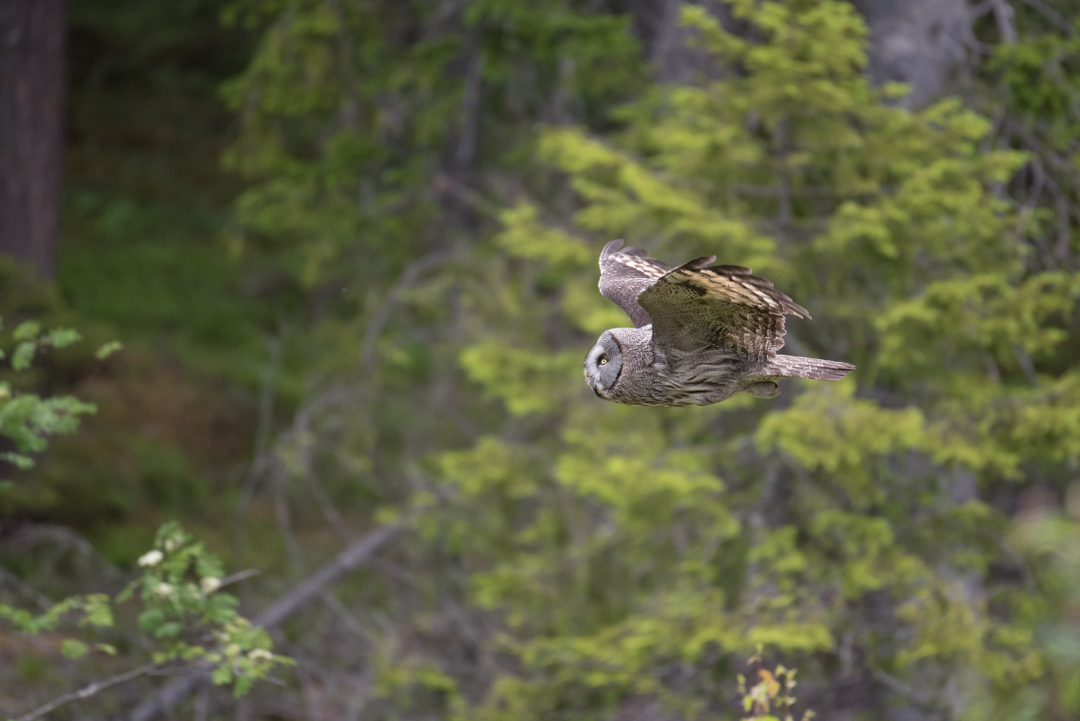 The Great Grey Owl is the second largest owl species in Europe after the Eagle Owl (Bubo bubo). Body length is 60–70 cm, and the distance between wingtips 130–160 cm. The bird weighs 570–1.900 g, females being ca. 300 g heavier than males, on average. The sexes look similar. The Great Grey Owl has very massive and rounded head with no ear tufts and a facial disc with concentric dark rings around yellow eyes. The plumage is mostly grey and

brown with darker and paler streaks and bars. The Great Grey Owl preys on small voles both daytime and at night.

Breeding. In Europe the Great Grey Owl breeds regularly in north-eastern Sweden, from Central Finland to southern Lapland, and in northern Russia all over the taiga zone (Mikkola 1981, Cramp 1985, Stefansson 1997, Svensson et al. 1999, Hagemeijer & Blair 1997, Väisänen et al. 1998, Valkama et al. 2011), with scattered small populations in Belarus and Ukraine. The species is absent in alpine northern Lapland and in the tundra zone in Kola Peninsula and east of the White Sea. Outside Europe this Holarctic owl species breeds along the American boreal zone from Alaska to the Hudson Bay, and in Siberia from the Ural Mountains to the Pacific Ocean. Non-breeding. Most Great Grey Owls remain close to their breeding sites throughout the year although after large-scale collapse in vole populations they are obliged to wander somewhat further south from the regular breeding range.

The Great Grey Owl breeds in coniferous and mixed forests. It prefers spruce-dominated or mixed pine-birch old-growth forests adjacent to open peatlands, clear-cut areas and abandoned fields suitable for preying voles. As the species nests mostly in old twig nests of the Goshawk (Accipiter gentilis) and the Common Buzzard (Buteo buteo), availability of an eyrie has major effect on the choice of a nest site. Especially in Finland bird-ringers have provided artificial nests for the Great Grey Owl which seems to accept them for breeding in many kinds of forest habitats, including small forest tracks manipulated by intensive forestry. However, the majority of the North European population breeds in extensive and remote forest coniferous areas. Non-breeding. Great Grey Owls live in mainly in similar forests outside breeding season, too. Nomadic birds prey often also in agricultural land, large clear-felled areas and roadsides.

Majority of the breeding pairs seems to be site-tenacious as long as there are enough small voles for food. In more marginal parts of the range, the number of breeding pairs and the distribution of nest-sites vary depending on eruptions from the core parts of the range (Mikkola 1981). Probably both young and breeding owls may wander in all directions up to hundreds of kilometres. The Great Grey Owl breeds usually in an old twig nest built by a large diurnal raptor. It nests also on a head of dead tree stumps, rarely on the ground and on abandoned ant hills. The species accepts readily artificial platforms in trees. The female lays 3–6 eggs and incubates them 28–30 days while the male is responsible for providing food for her and the young. The young remain in the nest 20–28 days but remain dependent on food brought by their parents for additional 15–17 weeks. Age of first breeding is usually two years but some birds may become mature and breed at the age of one year if voles are abundant. Small voles (Microtus, Clethrionomys) form ca. 90% of the prey eaten during the breeding season (live weight). The diet includes also water voles (Arvicola terrestris), shrews (Sorex) and birds especially when small vole populations are at their lowest level. Outside the breeding season the percentage of small voles is almost as high as during breeding, but the owls may hunt more often other small mammals and birds, too (Mikkola 1981, Cramp 1985).

The global population of the Great Grey Owl has been estimated at over 60 000 individuals (BirdLife Internanational 2012). This estimate should be taken with suspect due to lack of inventories in major parts both in Nearctic and Palearctic range. The global population is most probably higher, because in Finland, for example, the winter population is estimated at 1.500–10.000 individuals (Koskimies 2014), and in Sweden in best years 3.000–3.500 individuals (Ottosson et al. 2012). The breeding population is estimated at 200–1.500 pairs in Finland (Valkama et al. 2011, Koskimies 2014), and 200–600 pairs in Sweden (Ottosson et al. 2012). In Norway, with the most regular population restricted to the Pasvik river valley in the north-easternmost corner of the country, the number of breeding pairs has been estimated at only 0–10 pairs a year (BirdLife International 2004). A distinct newcomer population of a few pairs breeds nowadays in Central Norway. The rough estimate for European Russia is 1.500–4.500 pairs (BirdLife International 2004). The total wintering population in Barents region is probably at least 20.000 birds. In spite of marked annual fluctuations the population in the Nordic countries seem to have remained at more or less same general level since the mid-1900s (Väisänen et al. 1998, Valkama et al. 2011, Ottosson et al. 2012, BirdLife International 2012). In Russia, there is no data to define any trend.

The Great Grey Owl adapts to versatile forest and open environments for breeding and preying, if it finds a suitable nest site. Intensive forestry felling much of the old-growth forestry and having a negative effect on the densities of the Goshawk and the Common Buzzard especially in Sweden and Finland may mean at least local lack of nest-sites for the Great Grey Owl, too. There are, however, two much more serious but indirect threats having a much more serious effect throughout the breeding range: climate change and ceasing of vole cycles. The Great Grey Owl belongs to the boreal species with the highest risk to loose most of its breeding range due to rapid increase of temperature in the north (Virkkala et al. 2008). Huntley et al. (2007) simulated the potential distribution of the species in 2100 to be much more contracted than nowadays, including only Finnmark, the Arctic coast of Russia from Kanin Peninsula eastwards, and Novaya Zemlya. According to both of these predictions the species will disappear in most the core areas of the present Barents range from Sweden to Russai. Another very serious threat and connected to changing climate is ceasing of rodent cycles, which has a devastating effect on all the predators and food webs as a whole (Meltofte 2013, Korpela 2014), including both the breeding and wintering success of the Great Grey Owl. Thus, the near future of the Great Grey Owl looks very alarming both in Barents region and globally.

The Great Grey Owl is classified as least concern (LC) both in the global and European IUCN Red List because of its large and stable range (globally 20.000.000 km2) and global population of over 60.000 individuals (which may be an underestimate, see above) (BirdLife International 2012). The species is classified as least concern (LC) in Finland, near threatened (NT) in Sweden, vulnerable (VU) in Norway and ? in Russia. The Great Grey Owl is listed in Appendix I of the European Union Birds Directive as a species in need of conservation. Protection of old-growth forests and building of artificial nests enhance reproductive productivity. All actions against climate change affect positively for the Great Grey Owl.