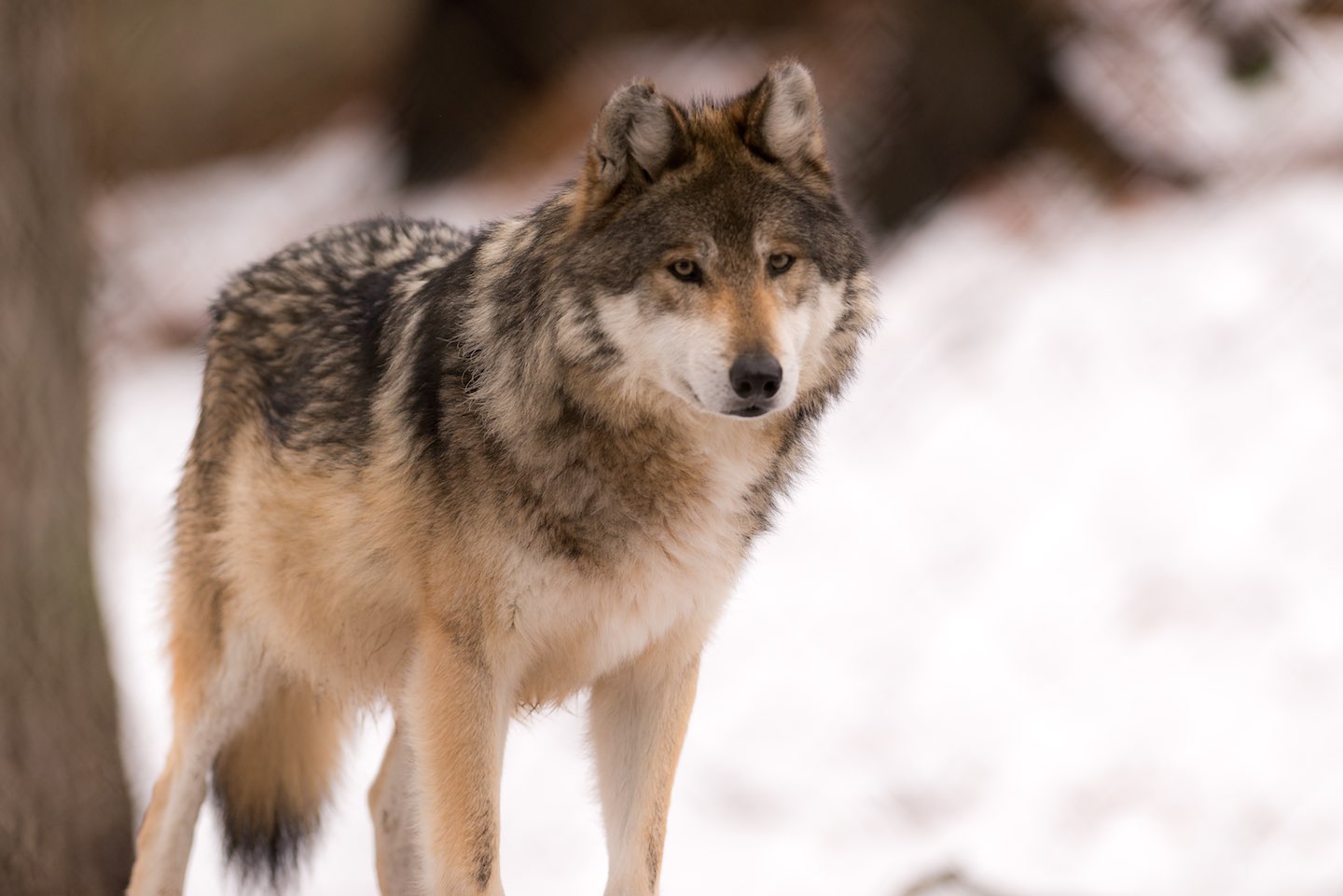 The wolf is the biggest canid species and the second largest predator in Europe after the brown bear (Ursus arctos). The height at the shoulder varies from 50 to 70 centimetres, length from head to tail 110–150 centimetres. The weight of an adult male is usually from 30 to 60 kg. The female is a little lighter. Biggest wolves in n the northern parts of the range. The wolf has long legs and direct back line, giving a somewhat rectangular shape to the animal. Pelt

colour varies from white in the arctic areas to darker, usually brown, grey, reddish and silverfish, in the boreal forests. Cheeks are usually paler. The wolf runs effectively for long periods.

Norway and Sweden have a common wolf population in the south, part of the animals moving in both sides of the national border (e.g. Ekman 2010). Single wolf packs live also in some discrete areas all along the Scandinavian mountains and in Finnmark. In Finland the wolf is patchily distributed in southern half of the country, and on the Russian border further north (Jdeidi et al. 2010). Up to the 19th century wolves lived all over the Barents Region, but the species went almost extinct in the mid-1900s due to heavy persecution, expansion of human settlements, and steep decline of prey populations, especially the moose. Originally the wolf had the widest distribution of all the terrestrial mammals, living throughout the northern hemisphere north of 15°N latitude in North America and 12°N in India (e.g. Boitani 2000).

The wolf is very adaptable to live in almost all kinds of terrestrial habitats with a sufficient density of suitable prey species, especially the moose, reindeer and roe deer. Wolves hunt both in all forested habitats as well as in open terrain, most often in peatlands and tundra, seldom in agricultural lands. Due to century-long and still-lasting persecution the species avoids close contact with human. Most wolf packs live in remote areas far from settlements, houses, cottages, roads, ski centres and other areas with regular human activities. In southern Barents regions however, some packs and single wolves live in smaller forest areas closer to rural villages and fields, preying sometimes dogs and livestock, most often sheep and young cows.

Wolves are social and live in packs which consist mostly of families and other closely related individuals (e.g Mech & Boitani 2003, Ekman 2010, Boitani & Powell 2012, Laaksonen 2013). The dominant pair (alfa pair) breeds, and the younger females remain reproductively suppressed unless there is an abundant amount of food available within the pack´s territory. Typical size of a pack is 5–12 animals, but it may be up to ca. 20 animals. The pack defends a territory of ca. 500–2,000 km2 depending on prey availability and habitat. Territory ownership is marked by howling and scent-marking, and intruders from other packs may be killed. The den is in a secure place under rocks or a tree trunk, behind thick row of spruce saplings or other vegetation, or in a hollow on the ground. The main mating period is from February to March, and the female gives birth after nine weeks. Litter size varies from one to 10, but usually there are 4–8 cubs. The female nurses her cubs for 8–10 weeks. Female becomes mature at the age of 2 years. The longest-living wolves may live in nature over 10 years, but the average longevity is hardly half of that. Wolves are generalist carnivores and hunt all kinds of mammals but take occasionally also other vertebrates and bird eggs. A full-grown animal may eat 3–6 kg meat a day but is able to fast for at least half a week. In winter the majority of food consists of moose (Alces alces) calves and females, reindeer (Rangifer tarandus), roe deer (Capreolus capreolus) and other large ungulates in addition to carcasses. Solitary wolfs are unable to kill large ungulates alone and, instead, hunt smaller mammals like mountain hares (Lepus timidus) and small rodents. Lone individuals are many times obliged to hunt dogs, sheep and other livestock. In summer with larger variety of food sources it is more common for wolves to hunt singly, in pairs or small groups. Wolves prefer sick or injured prey animals in order to save energy and avoid risks of getting hurt or even killed by e.g. a strong moose. Wolves often cache surplus food.

There are no reliable estimates of the global wolf population published recently, but it must be well over 100,000 individuals (e.g. Sillero-Zubiri et al. 2004). In global scale, wolf populations in Scandinavia and Finland are tiny while both the range and population size in various parts of Russia are considerably larger. The present population in Norway is ca. 30, in Sweden 230–260, and in Finland about 200 individuals. In Russian part of Barents Region the wolf population is many times larger and a common animal and the numbers tends to increase. Northwestern Russia has probably about 1,000 individuals (Large Carnivore Initiative for Europe 2007, Wabakken et al. 2009, Franzen 2013, Artsdatabanken 2014, Riista- ja kalantutkimus 2014). The species was almost extinct both in Scandinavia and Finland in the first half of the 20th century, with only some tens of animals left in total in all the Nordic countries. In Sweden, only ca. 10 wolves were left in the 1950s. The Fenno-Scandian population began to increase slowly after legal protection and positive changes in public attitude since the 1960s and 1970s, in Finland also thanks to a growing number of newcomers from Russia. Many wolf packs have territories along both sides of the Finnish-Russian border, and according to genetic characteristics, the wolf population in Finland and northwestern Russia form a singe effective population. The Scandinavian wolf population has slowly increased in recent decades but the Finnish one almost halved during the last ten years due to illegal killing. Numbers have felled considerably down also in northwestern Russia due to excessive hunting. Globally the population has remained at the same general level (Jdeidi et al. 2010).

As in other top predators, natural threats to wolves include primarily intraspecific strife, starvation, illness or parasites, very rarely killing by a brown bear. The main cause of excess mortality and major threat of wolf populations in Barents region is killing by humans, motivated by direct economic losses like livestock and dogs especially when the dogs are running freely in moose hunting (e.g. Kojola et al. 2004). Preying of game animals by wolves is a general argument against this predator, too. Actually, the wolves cause very little economic damage compared to other reasons of mortality of livestock and game animals. Quotas of legal killing – often too high and based on non-scientific reasoning – and especially illegal killing are motivated also due to primeval irrational legends and misinterpretation of wolf’s biology and behaviour. Poaching occurs in all three Nordic countries but has been most devastating in Finland, where the population decreased from almost 300 to ca. 150 individuals in four years since 2007 (e.g. Boitani 2000, Ekman 2010, Franzen 2013). In northern Fenno-Scandia governments allow almost all wolves to be killed by special permits (needed because of the strict legal protection by national and international legislation) to protect reindeer husbandry. This hinders gene flow between the eastern and Scandinavian populations in Barents region; the Scandinavian gene pool is too low for a genetically viable population in the long run. In Russia excessive hunting is motivated also in some scale by fur trade. Fragmentation of habitats because of settlement and road building, infrastructure for recreational activities and other human use of remote areas pose a local threat due to diminishing of suitable habitat and collision with cars etc. Modern forestry, however, increase population sizes of moose and roe deer, which is beneficial to wolves.

The wolf is strictly protected in Scandinavia and Finland, in Sweden and Finland also by the EU Habitats Directive (1979). The species is included in Appendix II of CITES agreement (1973). Enforcement of legal protection, however, varies, and it has not been able to stop poaching. Boitani (2000) identified three key goals for wolf management in Europe, and they are relevant in Barents region, too: 1) to allow wolf to recover throughout the Europe, 2) to minimize conflicts between wolves and humans, and 3) to achieve a large-scale management of wolf population throughout the entire range. Compensation of true losses of livestock owners and reindeer herders should be improved, in connection with better protection by fences and more intensive guarding where possible (Hobbs et al. 2012). Acceptance of wolves by the general public should be improved by awareness campaigns and popular books like e.g. by Ekman (2010) and Laaksonen (2013). The local and regional economic value of living wolves and other predators should be increased by developing eco- and nature photographing tourism in co-operation with nature conservation administrators and private companies. One of the research topics of high priority is the effect of wolves on prey populations (e.g. Kaartinen 2011, Boitani & Powell 2012).