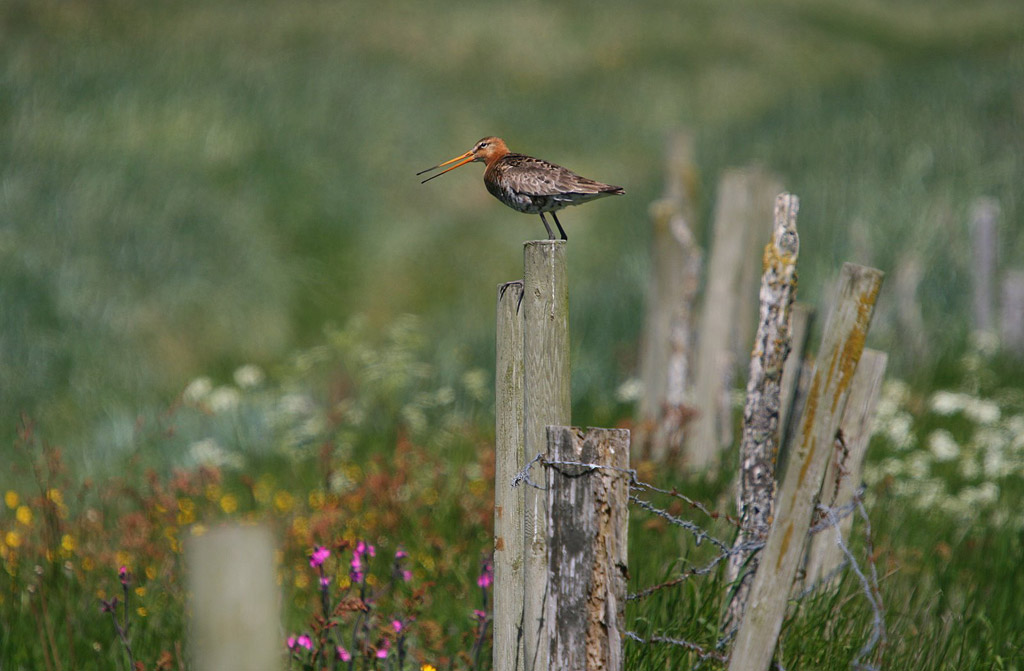 The Black-tailed Godwit is a large wader with a long neck, very long and straight or slightly upturned bill, and long dark-grey legs. The body length is 40–44 cm and the wingspan 70–80 cm. The species weighs 250–390 gr. In breeding plumage the male´s mantle and scapulars are brick-red mantle with black markings, the neck and upper-breast are brick-re, lower breast and underparts are white. The colours of the female are duller. In juvenile bird the head and

face are rather plain, head and face buff. The Godwits are very suspicious and noisy birds when displaying and giving alarm calls.

The Black-tailed Godwit breeds in several sites along the Norwegian coast up to Finnmark. The range covers also southernmost Sweden, many Baltic Sea islands, and a few discrete sites in Finland, the majority of the pairs concentrating on the Liminganlahti Bay in the northern end of the Gulf of Bothnia (Gjershaug et al. 1994, Svensson et al. 1999, Ottosson et al. 2012, Väisänen et al. 1998, Valkama et al. 2011). Further east the breeding range extends from the Baltic States to western Siberia. The Black-tailed Godwit breeds also in many western European countries as well as in smaller and discontinuous areas in East Asia. The birds breeding in Barents region winter in Africa between Sahara and the Equator.

The Black-tailed Godwit prefers extensive freshwater wetlands, estuaries and temporally inundated shores of lakes and rivers, moist grasslands, raised bogs, marshes and moorlands with grass of variable height and density, and fragmented by muddy open plots (Cramp 1983, Tucker & Heath 1994, Delany et al. 2009). Due to drainage of these kinds of natural habitats most populations inhabit secondary habitats, like pastures and wet and well-grown grasslands, and in cultivated fields. In Finland, the species bred up to the early 1980s almost exclusively in the shore meadows, but recently the species began to breed in grazed pastures and open-ditched fields, as well as several peat bogs and other mires in other parts of South Finland (Pessa & Timonen 2013). After breeding Black-tailed Godwits gather to estuaries and other muddy sea coasts and large wetlands.

Black-tailed Godwits arrive in their nest-sites from mid-April to early May. The nest is on the ground in fairly short but lush vegetation. Black-tailed Godwits prefer to concentrate in more or less dense colonies to protect their nests against predators, with a typical breeding density of 2–3 pairs per hectare at most. The female lays 3–4 eggs in May or early June. Both parents incubate 22–24 days and take care of the young for 25–33 days. If a habitat patch is too small for more than one or two pairs, or the group of breeders consists only of a few pairs for some other reason, breeding success is markedly lower, on average (e.g. Delany et al. 2009). Due to destroyed nesting attempts and immature birds, there is a good proportion of non-nesting individuals in a population. Breeding success varies from geographical area and habitat to another. In Finland, for example, at least ca. 40% of nesting attempts fail in spring-sown cereal fields while in fallow fields and other grasslands the breeding success is higher (Pessa & Timonen 2013). Pastures with cattle tramping many nests produce usually fewer young than non-grazed habitats. The birds depart from their breeding grounds from late June, most of them in July. Age of first breeding is 2–3 years. The Black-tailed Godwit prefers insects and their larvae for food, especially beetles, as well as annelid and polychaete worms, molluscs, crustaceans and other invertebrates, fish eggs, and the spawn and tadpoles of frogs. Outside the breeding season the species eats also plants, including seeds, rice grains and berries.

The global population of the Black-tailed Godwit is at least over 600 000 individuals (BirdLife International 2012). In Europe, half of the population of the nominate limosa (the same subspecies as in Barents region) breed in the Netherlands. The Fenno-Scandian populations are very tiny compared to the European total: in Norway 40–100 pairs (BirdLife International 2004), in Sweden 52–97 pairs (Ottosson et al. 2012), in Finland 110–130 pairs (Pessa & Timonen 2013), and in Leningrad Oblast 100–200 pairs (Fedorov 2002), respectively. Northernmost populations further east in European Russia are inadequately monitored. Interestingly, the trends in Sweden and Finland are opposite to each other: in Sweden from ca. 500 pairs in the 1970s to 75 pairs nowadays (Ottosson et al. 2012), but in Finland from ca. 15 to 120 pairs, respectively (Pessa & Timonen 2013). The Swedish population is going to disappear with the present rate of decline within 10–15 years. The Norwegian population has remained at the same general level recently. In Western and Central Europe the species increased in numbers in the early 20th century thanks to extension of open but extensively cultivated agricultural landscape. After the mid-1900s, however, large-scale and intensive drainage of natural wetlands and other swampy lowlands as well as modernization of agricultural technology led to a massive destruction of beneficial habitats and at least 50% decline of the total European population (Tucker & Heath 1994, BirdLife International 2004, Delany et al. 2009).

The populations in Barents region are very tiny and marginal, and their fate reflects changes occurring further south. The most critical threats of the Black-tailed Godwit all over Europe are loss of nesting, feeding and staging habitats due to large-scale drainage of wetlands and intensification of farming practices (Tucker & Heath 1994, BirdLife International 2004, 2012, Jensen et al. 2008, Delany et al. 2009). These changes include the conversion of wet meadows to arable land and intensively grazed pastures, fertilizers, subsurface drainage instead of open ditches, heavy tractors and other machines, and other means of modernization of agricultural technology. In many East European countries both intensification of agriculture in part of the former extensively cultivated fields and, at the same time, abandonment of arable land altogether in other areas, have affected negatively on the species. Also loss of intertidal feeding habitat, hunting, pollution and disturbance by human, and drought especially in West African wintering quarters have probably had a negative impact on the European breeding population. Increasing numbers of mammalian predators, especially the raccoon dog (Nyctereutes procyonoides) and the red fox (Vulpes vulpes), may destroy nests more often than in earlier times. The climate change has been forecasted to reduce the present European breeding range of the Black-tailed Godwit by ca. 80% during this century (Huntley et al. 2007). Recent population increase in Finland may indicate first signs of this northward expansion, possibly leading to permanent concentration of the distribution in eastern Fenno-Scandia and Russia in the future instead of the present western and Central European core area.

The Black-tailed Godwit is classified as a near threatened (NT) species in the IUCN Red List (BirdLife 2012). BirdLife International (2004) categorized it as a species concentrated in Europe (over half of the global population), and which has an unfavourable conservation status in Europe. The Black-tailed Godwit belongs to the species of Annex II in the European Union Birds Directive. An international action plan of the species was published in 2008 (Jensen et al. 2008). In Finland, a thorough status assessment was published in 2013 (Pessa & Timonen 2013). In Norway the species is classified as endangered (EN), in Sweden as critically endangered (CR), in Finland as endangered (EN), and in Leningrad Oblast as vulnerable (VU). Conservation and management of suitable wetlands and wet meadows is of utmost importance both in the breeding and wintering range.