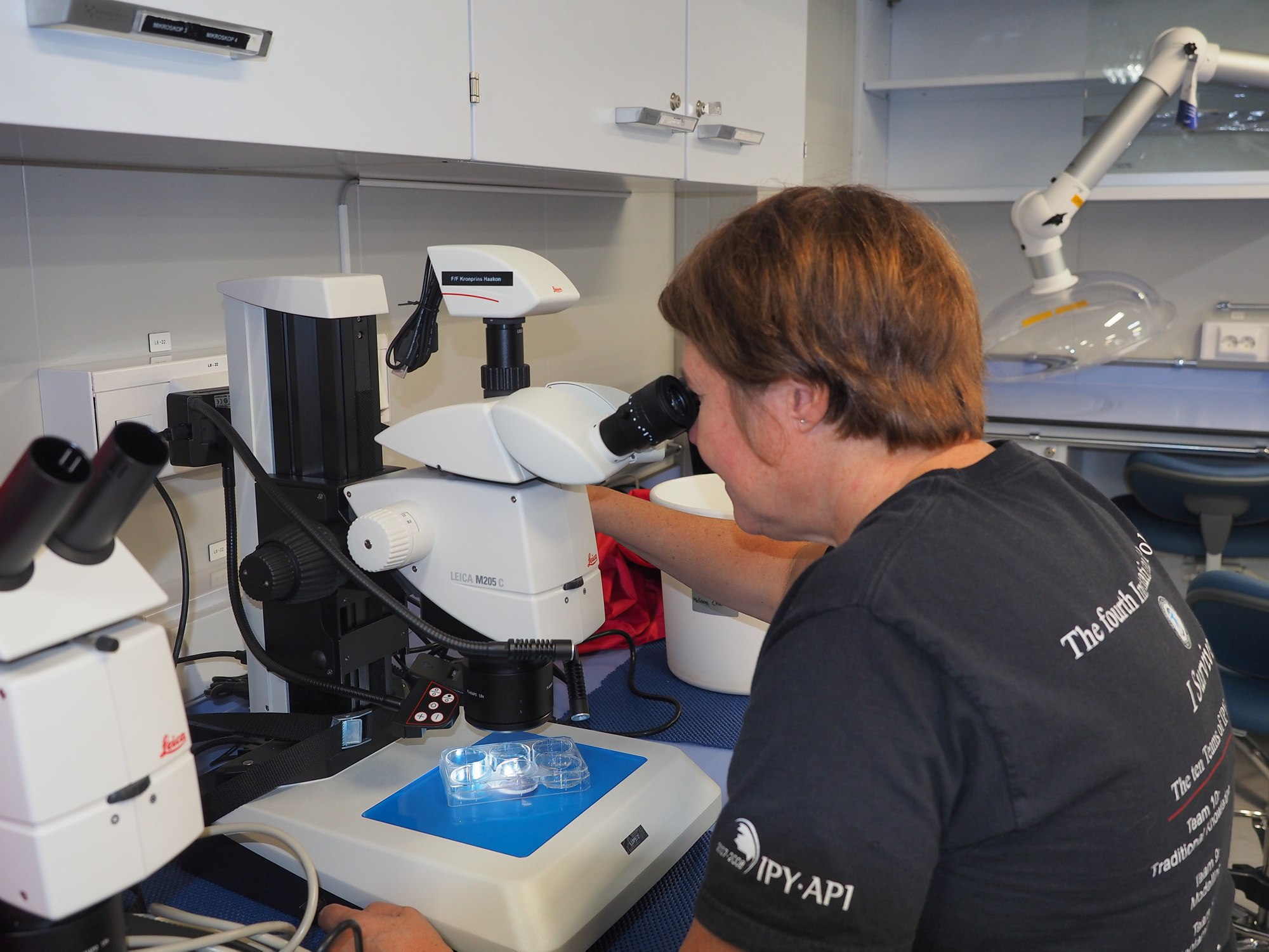 Phytoplankton development in the Barents Sea is typical for a high latitude region with pronounced maximum biomass and productivity during spring. During winter and early spring (January-March), both phytoplankton biomass and productivity are relatively low. Spring bloom is initiated during mid-April to mid-May and may vary strongly from year to year. Bloom duration is typically about 3-4 weeks and is followed by a reduction in phytoplankton biomass mainly due to nutrient exhaustion

and grazing by zooplankton. Later in the fall when the increasing winds start to mix the upper layer and bring nutrients to the surface, a short autumn bloom can be observed. However, the timing of phytoplankton development can vary

geographically. Spring bloom in the Atlantic water domain (without sea-ice) is thermocline-driven; whereas in the Arctic domain (with seasonal sea-ice), stability from ice-melt determines the bloom (Skjoldal and Rey 1989, Hunt et al. 2012). Thus, spring bloom at the ice edge can sometimes take place earlier than in the southern regions of the Barents Sea due to early stratification from ice melting.

Phytoplankton samples from the 2017 BESS survey collected at of 10m depth by CTD casts at 21 stations (Table 3.2.1), were analysed for taxonomy and abundance. In addition, water samples taken at 50m depth at four of these stations were also analysed. All samples were fixed in Lugol’s solution and analysed using the Utermöhl sedimentation method.

Dominant genera sampled were Cryptophyceae, Dinophyceae, Bacillariophyceae, and unidentified flagellates (Table 3.2.1). East of Svalbard, where satellite imaging suggested that chlorophyll-a concentrations relatively low (not shown), unidentified flagellate species tended to dominate. It should be noted that these waters were sampled later than waters to the south; this, may account for observed the taxonomic differences. 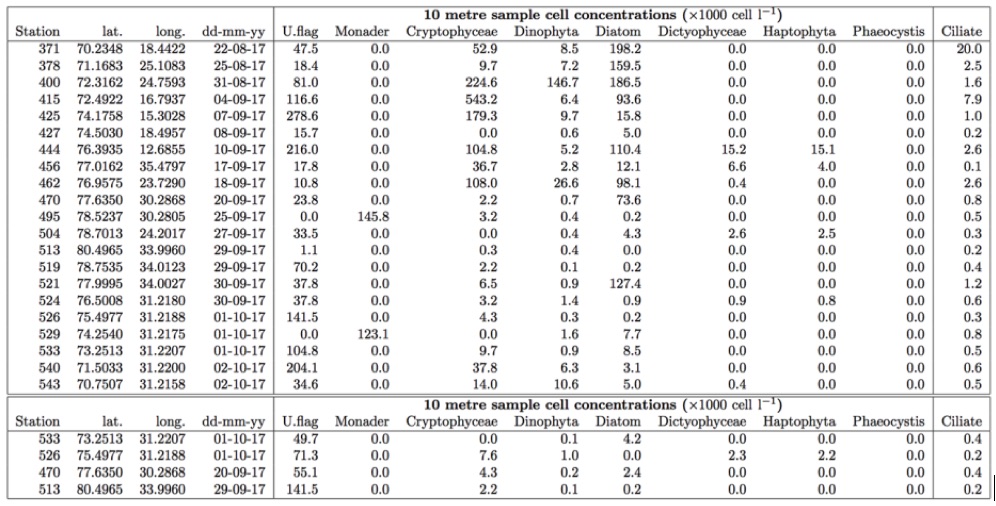 Nutrient and chlorophyll samples were collected from various depths at roughly 170 CTD stations. The nutrient samples (20 ml) were preserved with chloroform (200 ml), and kept at about 4°C until chemical analysis was conducted on shore at IMR. Chlorophyll-samples were collected by filtering 263 ml of seawater through glass-fibre filters, which were frozen at about -18°C followed by extraction of pigments in acetone with subsequent fluorometric analysis at the IMR laboratory. All samples are currently being analysed to determine concentrations of nitrate, nitrite, silicate, and phosphate, along with chlorophyll and phaeopigments.

Daily Net Primary Production (NPP) and Open Water Area (OWA) were calculated from satellite data as described in detail in Arrigo and Van Dijken (2015). Satellite-derived surface Chl a (Sat Chl a, Level 3, 8 days binned) was based on SeaWiFS & MODIS/Aqua sensors; SeaWiFS was used from 1998-2002, and MODIS/Aqua from 2003-2017. Data was updated using NASA's latest reprocessing - version R2018.0. Note that results presented in the 2018 WGIBAR Report (Annex 4) are updated in the current report. This work was done in collaboration with Professor Kevin Arrigo and Gert van Dijken from Stanford University, USA.

There was an increasing trend in the mean SST in the Barents Sea during 1998-2017 (Fig. 3.2.2). As expected, the surface temperature was highest in the regions influenced by the warm Atlantic Current (South West, Bear Island Trench, Thor Iversen Bank & South East). The northern most polygons (St. Anna Trough, Franz Joseph Land), influenced by the Arctic waters had the lowest SST. Polygons in the east such as the Pechora and Southeastern Basin showed a sharp increase in SST during the study period. 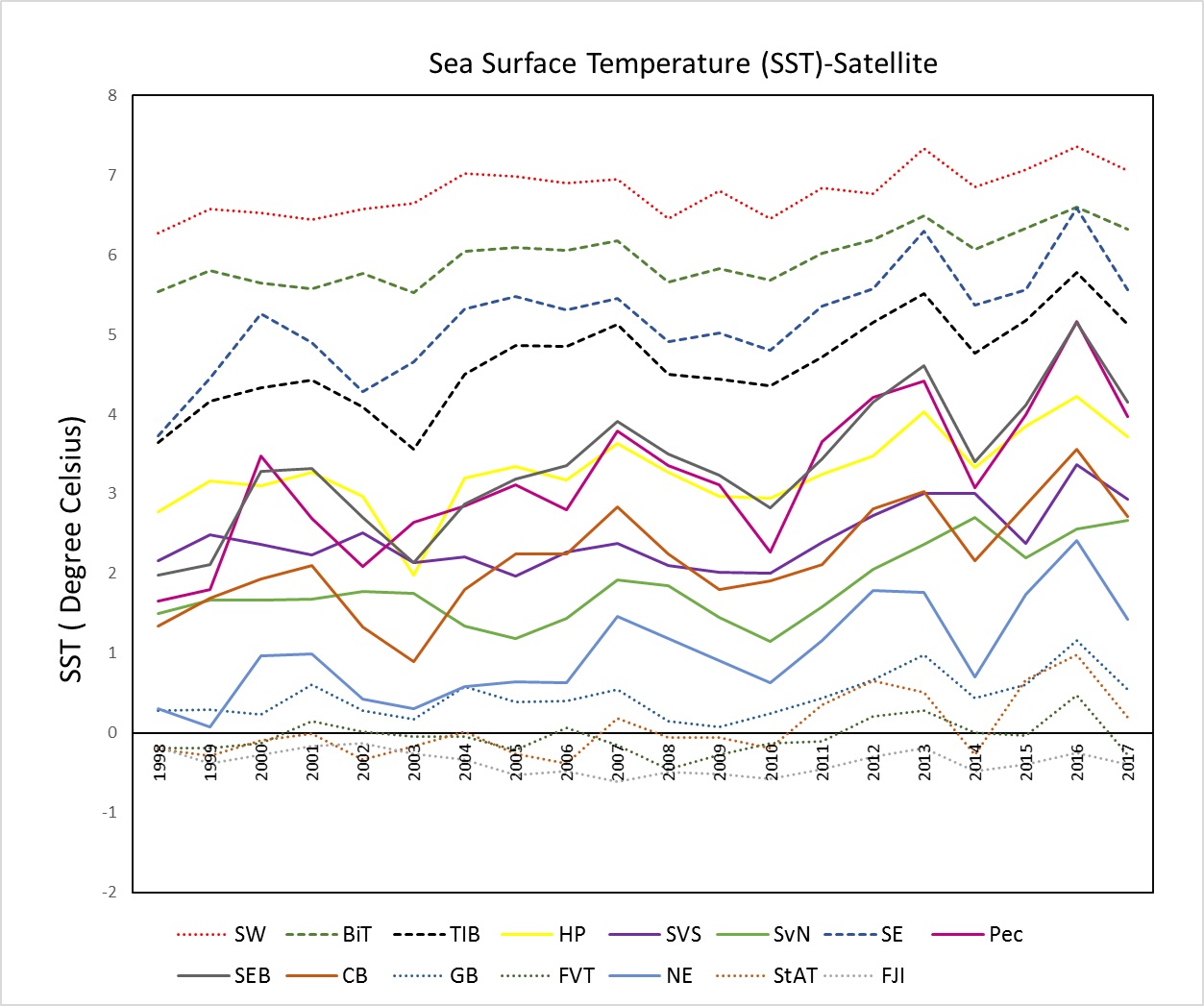 Spatial distribution patterns of Chlorophyll a

As remote sensing data provide good spatial and temporal coverage, we use these data to explore interannual variability in chlorophyll spatial distributions. Satellite data from the Barents Sea during 1998-2017 showed that there is large year to yearvariability and that the highest chlorophyll concentrations in general are observed in May (not shown). Comparison of Chlorophyll a distribution patterns from a cold year (1998) and a warm year (2016) with less ice, shows the north- and eastward expansion of distribution with earlier blooming and higher concentrations in eastern regions (Fig. 3.2.3). 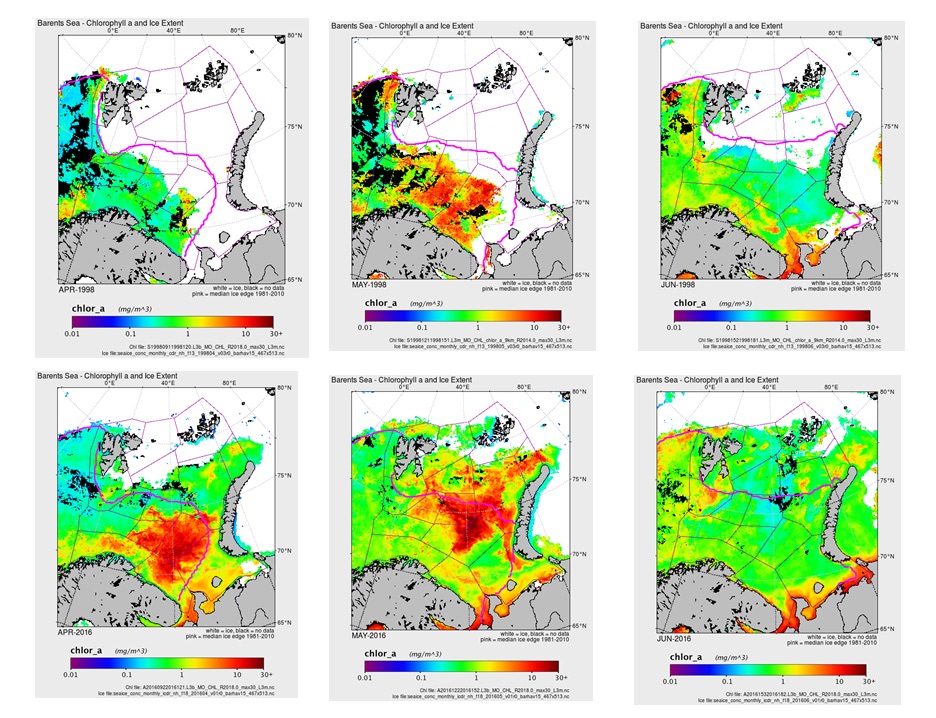 Figure 3.2.3. Spatial distribution patterns of Chlorophyll a for 1998 (cold year; upper panels) versus 2016 (warm year; lower panels) for April, May and June. White areas are ice-covered. The pink lines show the climatological (1981-2010) position of the ice edge.

Seasonal dynamics of Chl a concentration

We have explored seasonal dynamics of Chl a concentration per polygon during the years 1998-2017. Seasonal development of phytoplankton in the Barents Sea is typical for a high latitude region with a marked spring bloom. There is a large interannual variability in magnitude of the spring bloom over time (not shown). From March to June phytoplankton production in the Barents Sea is mostly based on winter nitrate. The autumn bloom is generally characterised with a smaller peak occurring around August/September, coinciding with autumn replenishment of nitrate due to deepening of the upper mixed layer. Chlorophyll a decreases gradually towards November, returning to very low-level winter conditions.

Examples of seasonal dynamics of Chl concentrations in two polygons from southern Barents Sea are shown in Figs. 3.2.4 and 3.2.5. The spring bloom Chl a concentration was higher and occurred somewhat earlier during the recent warm year (2016) than in colder years, such as 1998. During 2017, the spring bloom was not apparent as a peak in either of the two regions, with much lower spring Chl concentrations than in 2016 and also lower than the long-term mean. 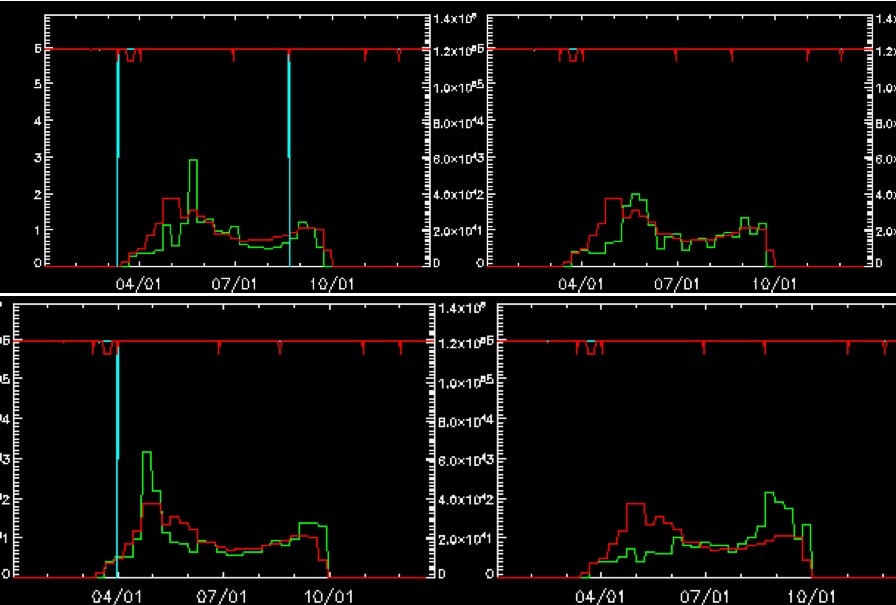 Figure 3.2.4. Seasonal dynamics of Chl a concentration (green curve) in the South West polygon for four selected years. Upper panels = years 1998 (left) & 1999 (right); Lower panels = 2016 & 2017. The area of open water (blue line) is shown on the top (note that this line is mostly hidden by the red line). Climatology of open water (red line on the top) and Chlorophyll a (red line at the bottom) is shown averaged for the period 1998-2017. The x-axis is time from January to December, with dates of 1 April, 1 July, and 1 October indicated. Scale of Chlorophyll a axis is to the left (mg Chl a m-3), while the scale for area of open water (104 km2) is shown to the right. 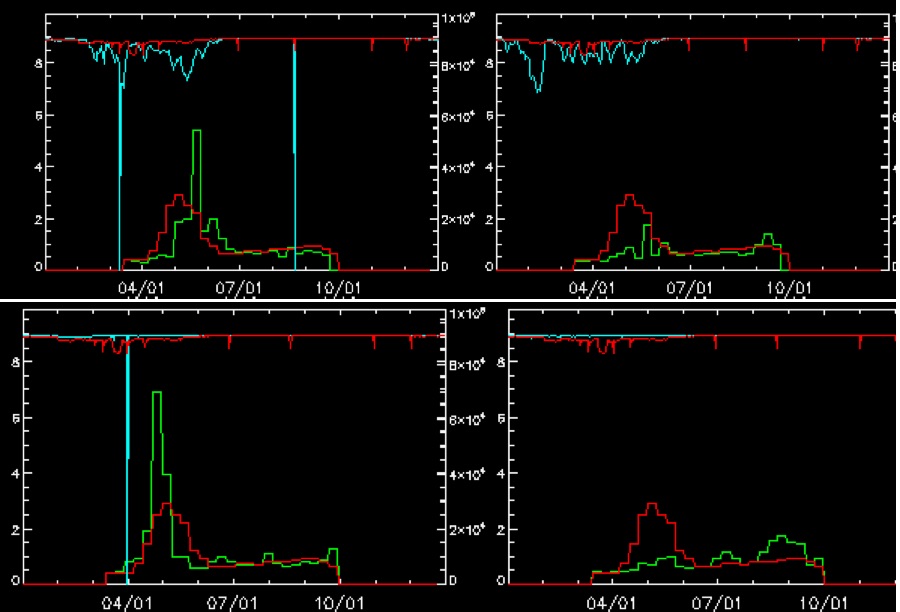 Satellite based NPP in the entire Barents Sea showed significant interannual variability during the period 1998-2017. However, the general trend shows that NPP has increased significantly (p = 0.006) over time (Fig. 6). This increase is mainly due to reduced ice coverage, leading to larger ice-free areas and a longer growth period (Fig. 9; see Dalpadado et al. 2014; Arrigo and Van Dijken 2011; 2015). Furthermore, mean production per unit area has in general also increased over time. Our results show that mean daily production rate (mg C m-2 day-1) averaged over time (combining all polygons), has increased from an average of 163 mg C m-2 day-1 for the years 1998-2009, to an average of 186 mg C m-2 day-1 for 2010-2017. The NPP in the eastern regions (North East & Pechora polygons) have increased significantly (p<0.01) during the study period (Fig. 7). The NPP in the northern polygons, have also shown an increasing trend over the years (Fig. 3.2.8). The production values here are low, however, compared to the southern and eastern regions. The NPP in the South West polygon showed large interannual variability, but no marked trend of increase (not shown). 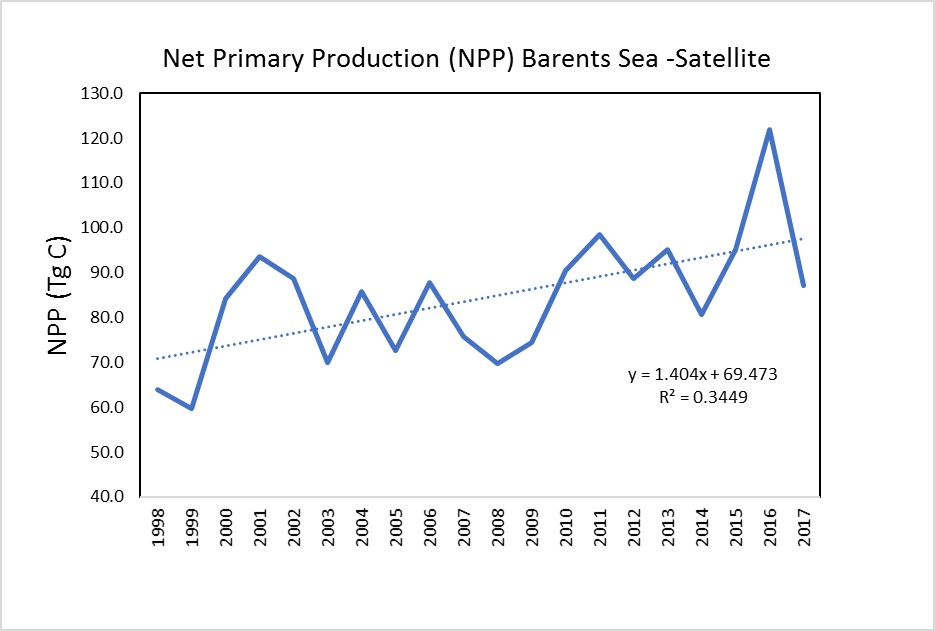 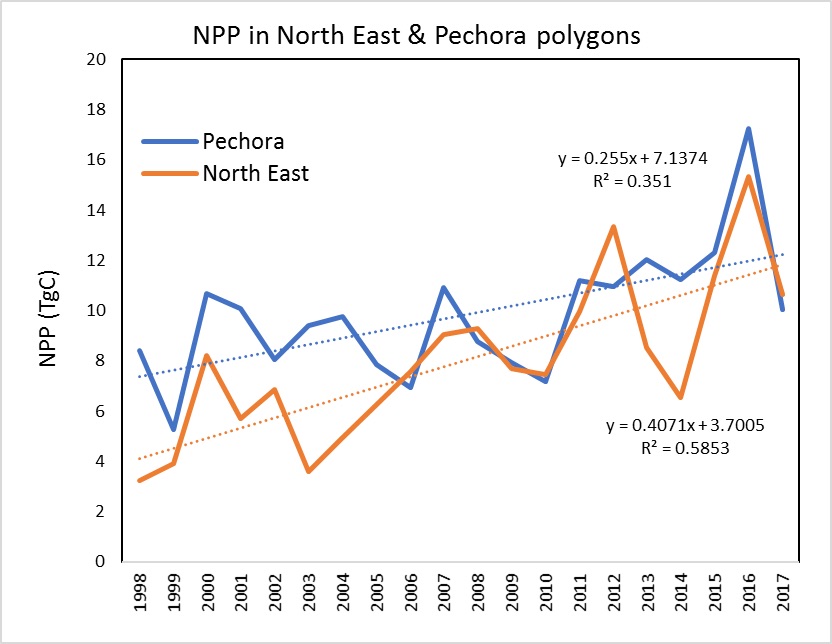 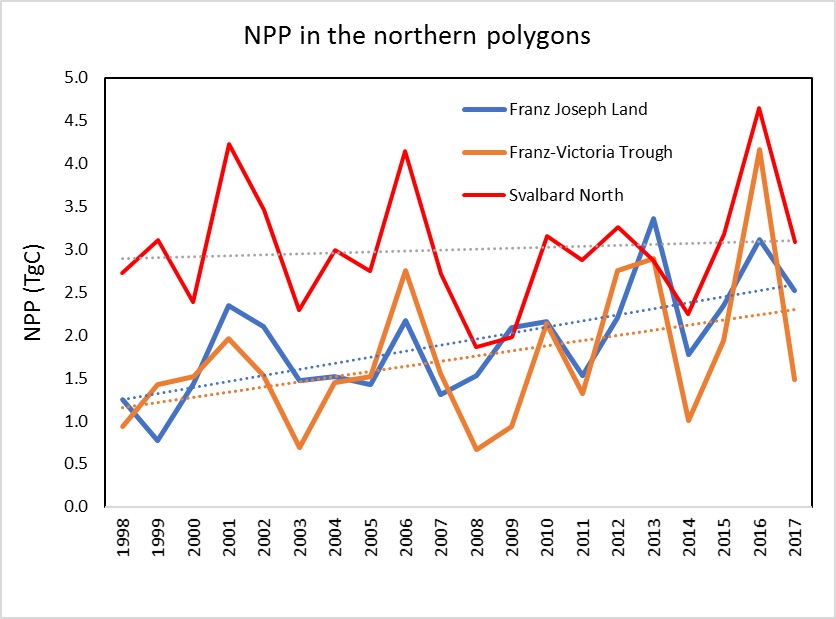 The concentration of sea ice in the Arctic has dropped by ca. 9% per decade since 1978 and has been accompanied with reduced sea-ice thickness and duration (Arrigo and Van Dijken 2015 and references therein). Due to reduced of sea ice, the OWA (maximum ice-free waters in late summer or autumn) in the Barents Sea has increased significantly over time, likely leading to higher NPP in the region. Satellite based Open Water Area (OWA) estimates confirm this (Fig. 3.2.9-upper; p<0.01). The increase is most pronounced in North East and South East polygons (Fig. 3.2.9-lower). 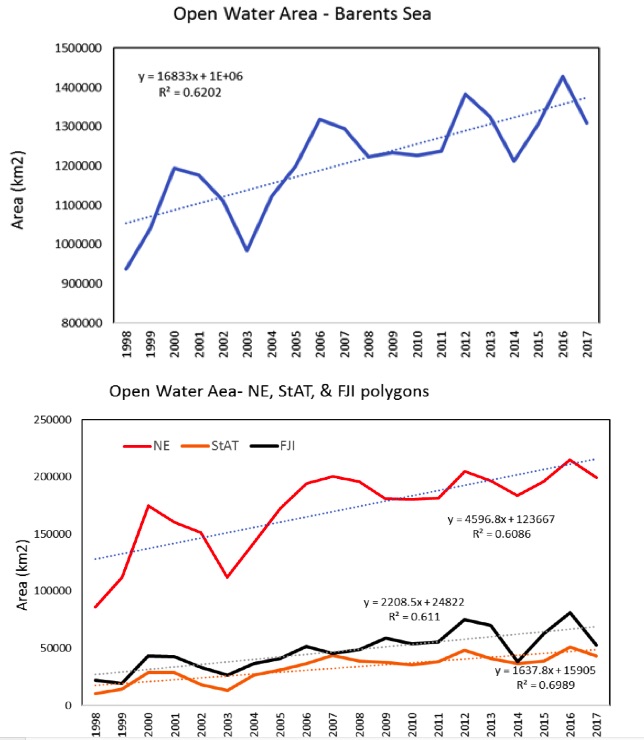 There was a significant relationship between increasing satellite-based NPP and increasing OWA (Fig. 3.2.10). In addition, NPP was also related to increasing chlorophyll a concentration (Fig. 3.2.10). The increasing trend in NPP shown in Fig. 6 is, therefore, a reflection of an increase in both OWA and average biomass of phytoplankton (Chlorophyll a). The highest NPP value (122 Tg C) was observed in 2016, the year with lowest ice coverage since 1951. 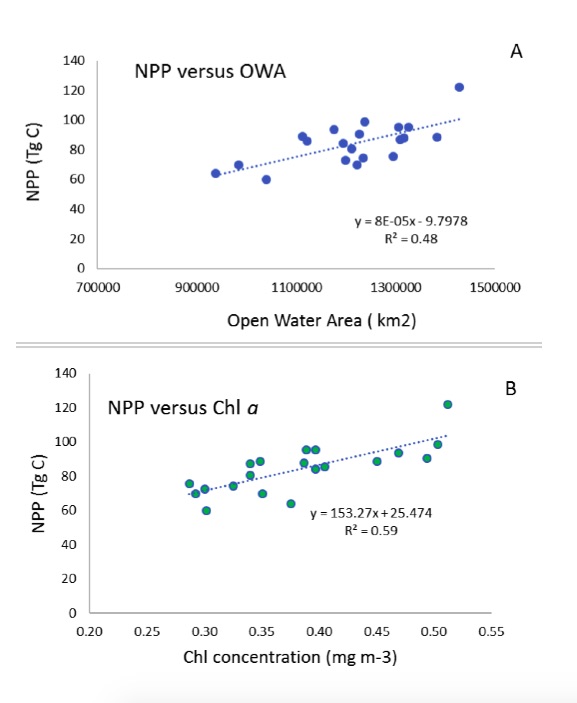 Figure 3.2.10. A) Relationship between satellite derived Net Primary Production (NPP) and and Open Water Area (OWA), and B) NPP and Chlrophyll a (Chl a)

Seasonal development of phytoplankton in the Barents Sea is typical for a high latitude region with a marked spring bloom usually peaking in May and an autumn bloom in August (Table 3.2.2.; Figs. 3.2.4 and 3.2.5). Peak Chlorophyll aconcentration in spring is much higher (ca 3.0 mg m-3) than in autumn (<1 mgm-3). The internannual variability of Chlorophyll concentration was much higher in spring (CV=27%) compared to autumn (10%). 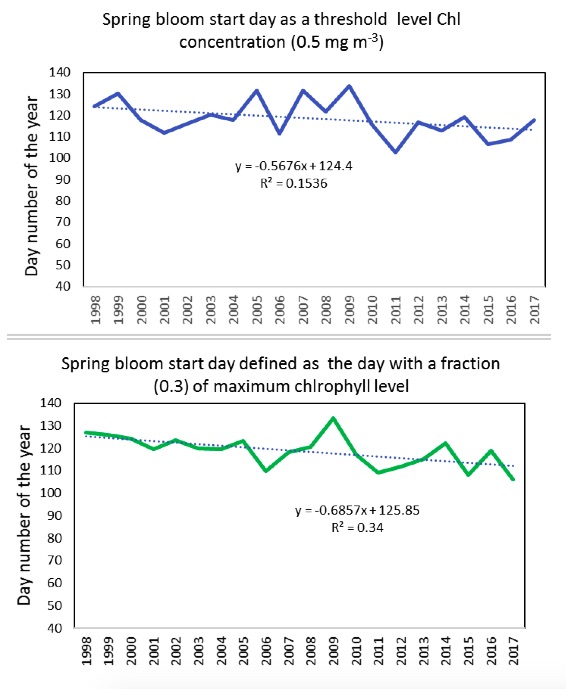 Figure 3.2.11. Spring bloom start day in the Barents Sea defined as the day as a threshold level of Chl a concentration of 0.5 mg m-3 (upper panel) and as the day with a fraction (0.3) of maximum chlorophyll level (lower panel).