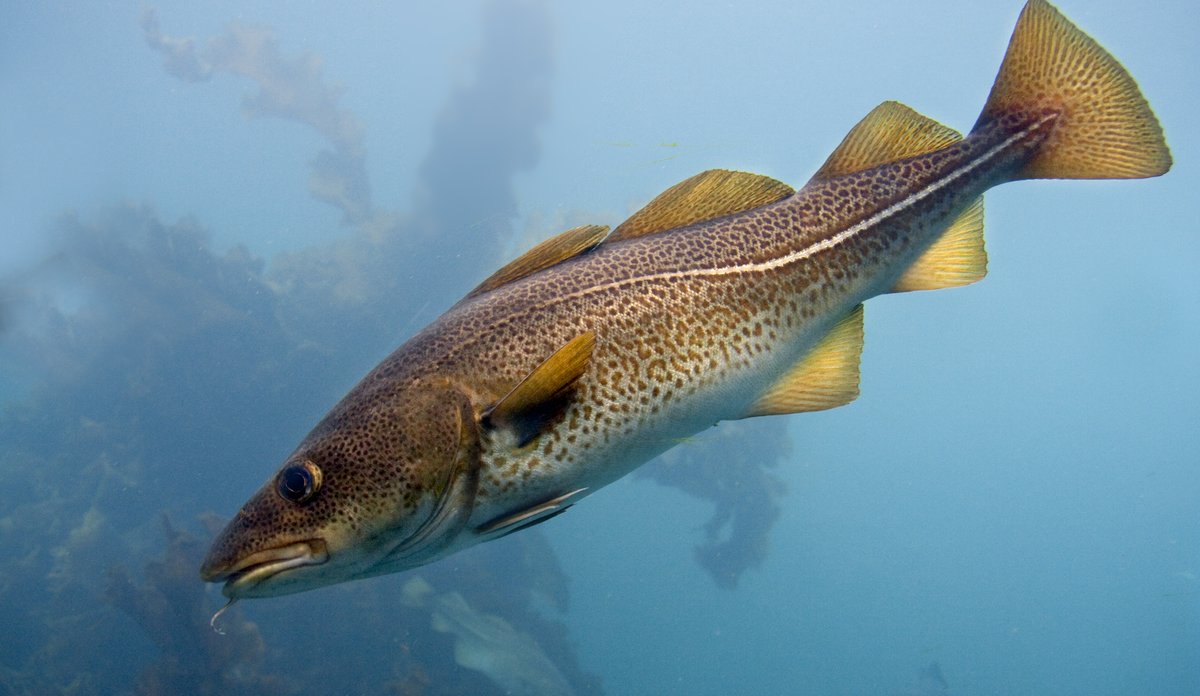 Cod is the major predator on capelin; although other fish species, seabirds and marine mammals are also important predators. In the last 6-7 years, cod stock levels have been extremely high in the Barents Sea. Estimated biomass of capelin consumed by cod in recent years has been close to the biomass of the entire capelin stock (Fig. 4.2.3). Abundance levels of predators other than cod are also high and, to our knowledge, stable. 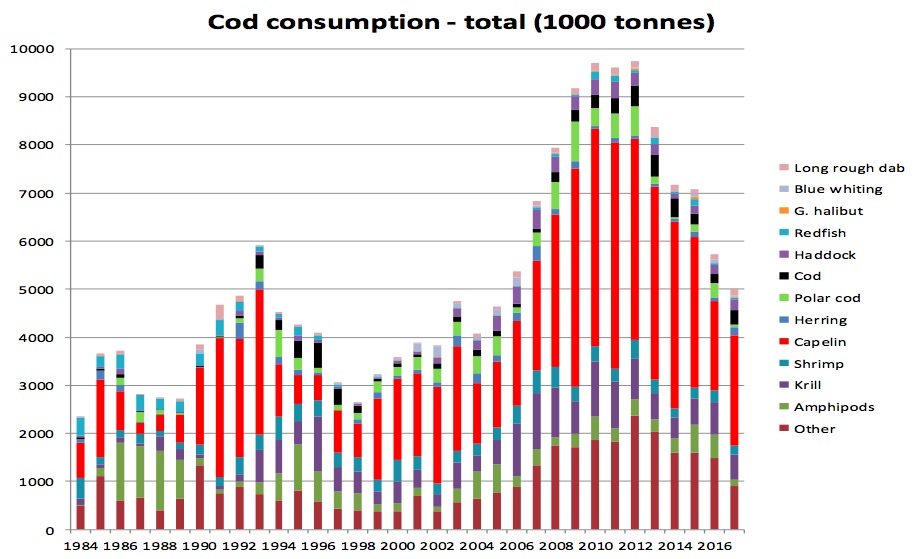 Figure 4.2.1 Cod consumption 1984-2017. Consumption by mature cod outside the Barents Sea (3 months during first half of year) not included. Norwegian calculations, preliminary figures, final numbers to be found in AFWG 2018. 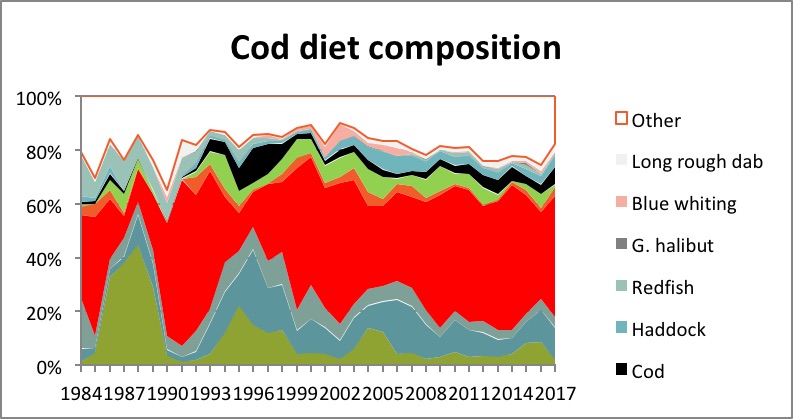 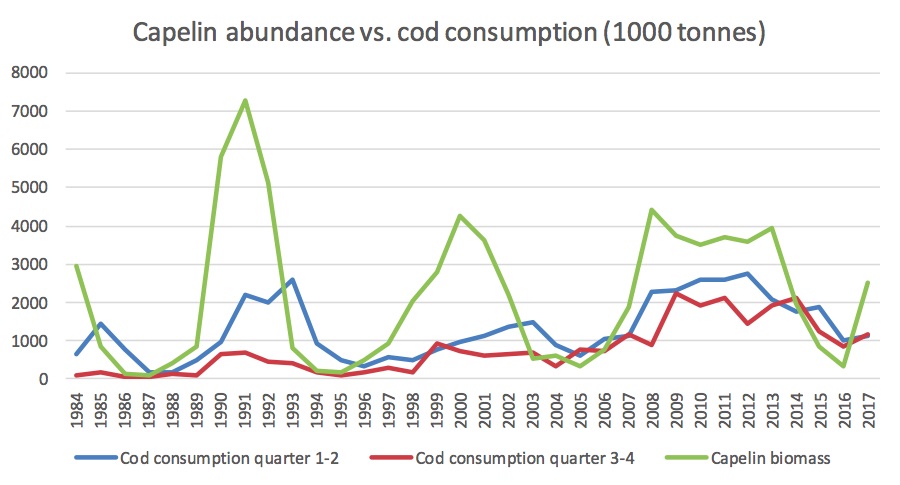 Estimated consumption of capelin by cod during first and second parts of the year has indicated different temporal patterns. Consumption during the 1st and 2nd quarters has been high during earlier time periods and includes consumption during the spawning period, and also during spring and early summer prior to seasonal capelin feeding migrations. During the last decade, however, a major difference has been the pronounced increase to a much higher level of consumption in the 3rdand 4th quarters (Fig. 4.2.3). This reflects the northward movement of cod stock, and a larger spatial overlap between cod and capelin under the recent warm conditions.

Fig 4.2.5 shows that there is a reasonable correspondence between the proportion of polar cod in the cod diet and acoustic estimates of polar cod. 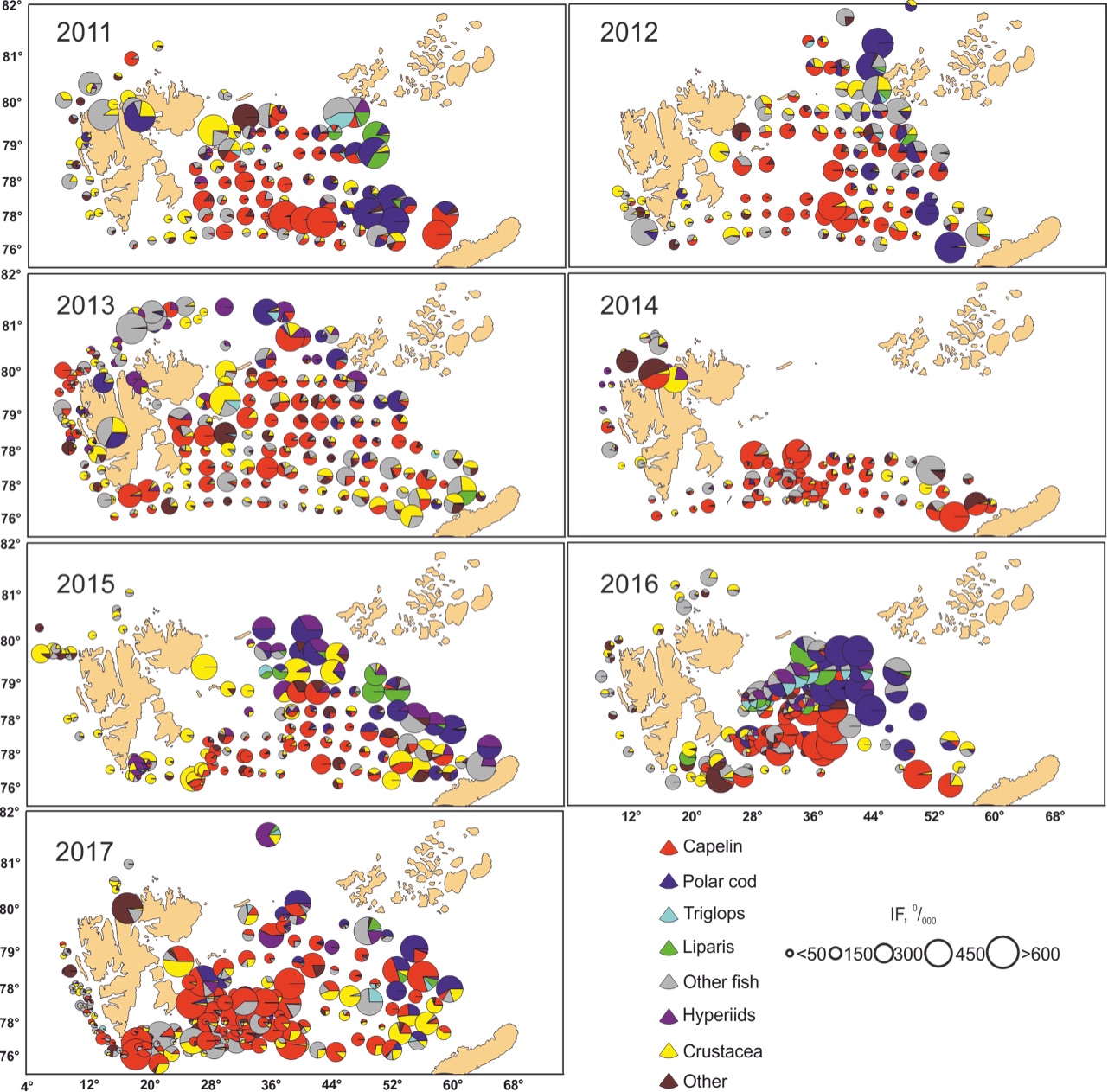 During the first capelin collapse (1985-1989) the importance of capelin in cod diet decreased from 53 % in 1985 to 20-22% (maximum) for the remainder of the collapse period. During that period, an increase of other prey was observed; in particular, hyperiids which constituted 7-23% of the capelin diet and redfish which constituted 3-18%.

During the second capelin collapse (1993-1997), the proportion (by weight) of capelin in the cod diet was high during the first 2 years (47% and 30%), followed by a decreased to 6-16%. During this period, cannibalism in cod increased sharply from 4-11% to 18-26% of the diet. In addition, more intensive consumption of hyperiids was observed (1-12 %), but the proportion of hyperiids consumed was still much lower than during the first collapse.

Investigations of cod diet in the area north of 76 N showed different types of feeding intensity in three different local areas (Dolgov and Benzik, 2014). Cod feeding intensity was low (149-1690/000) in areas near western and southern Spitsbergen — where cod feed on non-commercial fishes. Other local areas were characterized by high feeding intensity (MFI 214-251-169 0/000) with capelin as dominant; non-target species (snailfishes and sculpins), polar cod, and hyperiids were also consumed. These two are traditional areas of cod distribution during summer. The third area (Franz Josef Land, northern Novaya Zemlya, and adjacent areas) has become available habitat for cod only since 2008; in this area, cod (MFI 284-340 0/000) feed intensively on polar cod and capelin. Northward expansion of cod distribution, and their movement into north-eastern Barents Sea results in better feeding conditions for cod under their high stock biomass and decreasing of main prey (capelin and polar cod).

In addition, some new prey items appeared in the cod diet. The non-indigenous snow crab (Chionoecetes opilio) has become a rather important prey items for cod, especially in eastern Barents Sea alongside Novaya Zemlya (Dolgov and Benzik, 2016). The percentage (by weight) of snow crab in the cod diet sharply increased from 0.1-0.3% during 2009-2010 to 5.6-6.1% during 2014-2015; but decreased in 2016 and2017 (5.2 and 3.9% respectively) (Figure 4.2.6). In contrast, two other non-indigenous crab species have not become more importance in the cod diet, the percentages weight of red king crab and Geryon spp. have not exceeded 1.0% and o.2%, respectively. The difference is probably related to higher overlap between cod and snow crab, and more appropriate body shape and size of snow crab than the other crab species as prey for cod.

Consumption and growth for young cod has been relatively stable in recent years (Fig 4.2.7); there has been a slight decrease for older cod (Fig 4.2.8). Maturity at age for cod has decreased considerably in recent years, particularly for ages 6-9. For 2017, there is a discrepancy between Norwegian and Russian data – Norwegian data indicate that age-a- maturity seems to have again increased for these age groups; while Russian data indicate no such reversal. The change from 2013 to 2016 was considerably larger than indicated by recent changes in weight-at-age estimates (Fig 4.2.9 and 4.2.10).

Biomass of the main prey species, relative to the cod stock size, has decreased somewhat in recent years (Fig 4.2.11). However, no consequences — of the 2015-2016 ‘mini-collapse’ of the Barents Sea capelin stock on cod condition have been observed. This may be related to ongoing expansion of cod stock to the northern Barents Sea, making previously untapped food resources now available for cod consumption. 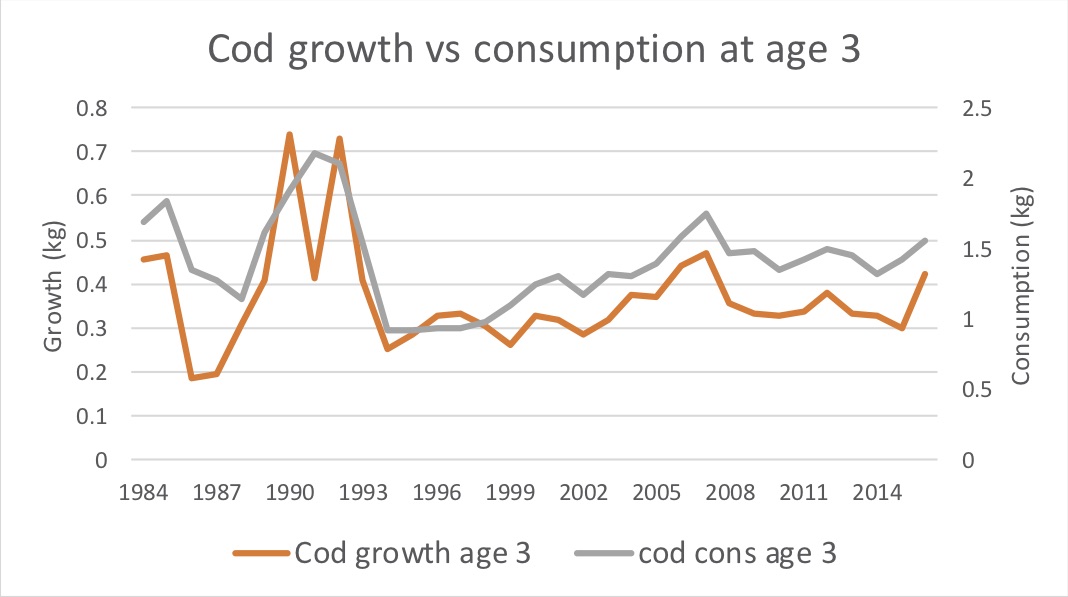 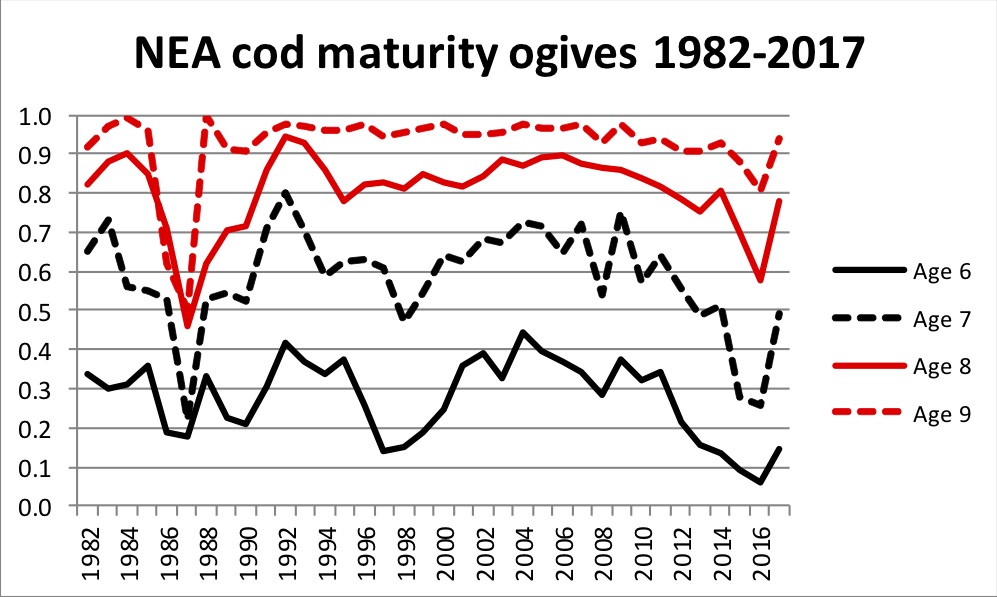