The phytoplankton development in the Barents Sea is typical for a high latitude region with a pronounced maximum in biomass and productivity during spring. During winter and early spring (January-March) both phytoplankton biomass and productivity are quite low. The spring bloom is initiated during mid-April to mid-May and may vary strongly from one year to another. The bloom duration is typically about 3-4 weeks and it is followed by a reduction of phytoplankton biomass mainly due to the exhaustion of nutrients and grazing by zooplankton.

Later in the fall when the increasing winds start to mix the upper layer and bring nutrients to the surface, a short autumn bloom can be observed. However, the time development of this general description can vary geographically. The spring bloom in the Atlantic water domain without sea-ice is thermocline-driven, whereas in the Arctic domain with seasonal sea-ice, stability from ice-melt determines the bloom (Skjoldal and Rey 1989, Hunt et al. 2012).  Thus, the spring bloom at the ice edge in the Barents Sea can sometimes take place earlier than in the southern regions due to early stratification from ice melting.

In 2018, two sets of phytoplankton samples were collected in the Barents Sea by IMR. The samples were obtained from CTD mounted water bottles, and analysed using the Utermöhl sedimentation method for 50 ml water samples preserved in Lugol’s solution.

The first set of samples was collected during spring, between the 22th and 25th of May along the Fugløya-Bear Island (FB) transect (Figure 3.2.1). The second set was collected during autumn, between the 4th of September and the 3rd of October in the Norwegian sector (Figure 3.2.2). During this time of year, solar elevation is too low at higher latitudes for the satellite to gather data and so complete satellite coverage for the Barents Sea was not possible. Sampling method and results of the phytoplankton analysis are provided in the BESS Report available at https://www.hi.no/filarkiv/2018/03/5_1_phytopl_chloroph_nutrients_.pdf/nb-no. During 2018, the abundance of Cryptophyceae, Dinophyceae, and Dictyophyceae was comparable with that of 2017. However, averaged over all the samples taken at 10 m depth, the 2018 BESS found much higher numbers of unidentified flagellates: averaging approximately 300 000 l-1 this year compared to 70 000 l-1 in 2017. In contrast, there were fewer diatoms: averaging approximately 53 000 l-1 in 2017 down to 5 700 l-1 in 2018. The 2018 survey data also indicated increased numbers of coccolithophores, all identified as Emiliania huxleyi, with an average of approximately 11 300 l-1 in 2018 compared to 1 070 l-1 in 2017. 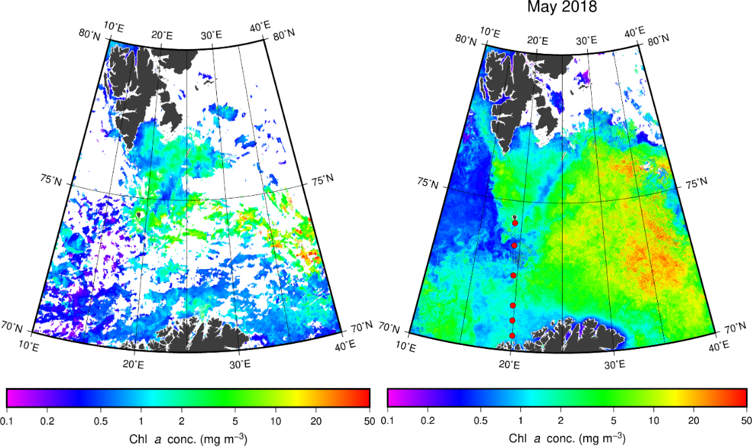 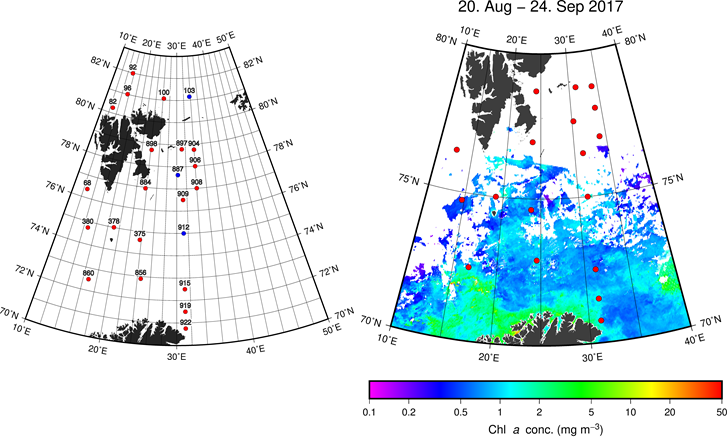 Figure 3.2.2. Left: Locations and station numbers for analysed phytoplankton samples obtained from the BESS between the 4th of September and the 3rd of October. Red dots indicate that only 10 m samples were analysed; blues dots indicate that both 10 m and 50 m samples were analysed, except for station 912 for which the 10 m sample was missing. Right: Mean surface chlorophyll concentration derived from daily MODIS satellite imagery for the September 4th to October 4th, 2018 period. Survey station locations are shown as red dots; white indicates regions of missing satellite data.

Remote sensing data having high spatial and temporal resolution were used in obtaining Chl a concentration (mg m-3), and mean daily NPP (g C m-2 day-1). Daily NPP and OWA were calculated from satellite data as described in detail in Arrigo and Van Dijken (2015). Satellite-derived surface Chl a (Sat Chl a, Level 3, 8 days binned) was based on SeaWiFS and MODIS/Aqua sensors. SeaWiFS was used in 1998-2002, and MODIS/Aqua in 2003-2017. Data were updated using NASA's latest reprocessing - version R2018.0. The values for the South-East and Pechora polygons were recalculated excluding the regions most influenced by river inflow (18% and 41% of the total area, respectively). The work done here is in collaboration with Professor Kevin Arrigo and Gert van Dijken from the Stanford University, USA.

Validation of satellite Chl a using in situ data showed significant correlations between the two variables in the Barents Sea (Dalpadado et al. 2014, ICES/WGIBAR 2017, this study) and thus, the NPP model based on satellite data by Arrigo et al. (2015) gives reasonable results that compare well with sea ground truthing measurements. Also, estimates of new production from phytoplankton based on nitrogen consumption (seasonal draw-down of nitrate in the water column) for the Fugløya - Bear Island (FB) and Vardø-Nord (VN) sections, representing the western and central Barents Sea respectively, from March to June resulted in values comparable to satellite NPP estimates (Rey et al. in prep, pers. com.).

Remote sensing data, providing good spatial and temporal coverage, were used to explore the seasonal and interannual variability in Chl a distribution. Satellite data from the Barents Sea during 2016-2018 showed large interannual variability with the highest Chl a concentrations generally observed in May (Figure 3.2.3). There was much less sea ice in 2016, and north- and eastward expansion of the Chl a distribution. Furthermore, earlier blooming and higher concentrations in the eastern regions in April and May were observed in this year. The year 2017 was a colder year with more ice especially compared to 2016. Chl a was much lower during April to July in 2017 compared to the previous year.  The ice cover was larger in April 2017 and 2018, than in 2016. Though the Chl a in April in 2018 was lower compared to 2016, high concentration was observed in May for both years. 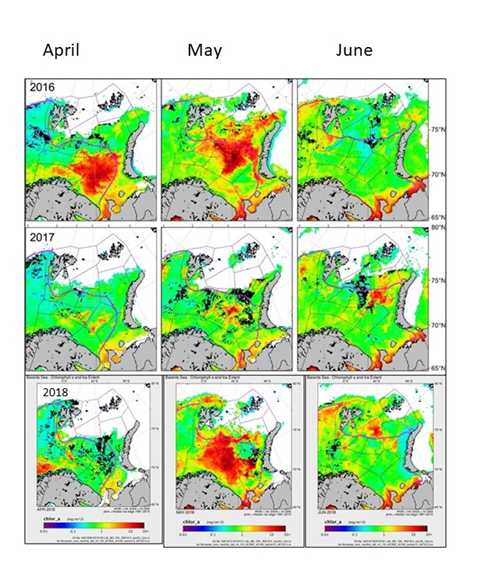 NPP of the whole Barents Sea showed substantial interannual variability, but generally increased significantly during the period 1998-2018 (Figure 3.2.4, p = 0.001). The mean daily NPP (mg C m-2 day-1) for the whole Barents Sea (combining all polygons) has increased from 163 mg C m-2 day-1 for the years 1998-2009 to 189 mg C m-2 day-1 for 2010-2018. NPP in the eastern regions (North East and Pechora polygons) increased significantly during the study period (p < 0.01). The NPP in some of the northern polygons also showed an increasing trend over the years, but production values were low compared to the southern and eastern regions. The NPP in the South West polygon showed large interannual variability with no marked significant trend over time (p = 0.511). 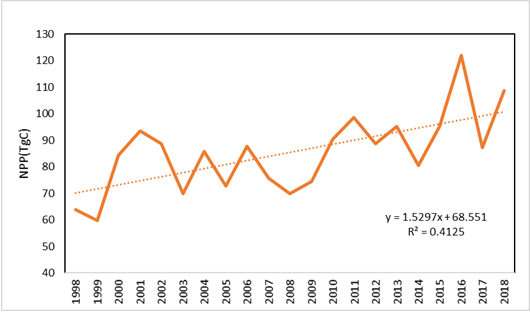