During the 2018 Barents Sea Ecosystem Survey (BESS) 83 fish species from 28 families were recorded in pelagic and bottom trawl catches, some taxa were recorded at genus or family level only (Prokhorova et al 2019). All recorded species belonged to seven zoogeographic group (Widely Distributed, South Boreal, Boreal, Mainly Boreal, Arcto-Boreal, Mainly Arctic and Arctic) defined in Andriashev and Chernova (1994).  In the following only bottom trawl catches of non-commercial fishes were used. Both demersal (including bentho-pelagic) and pelagic (neritopelagic, epipelagic, bathypelagic) species were included (Andriashev and Chernova, 1994, Parin, 1968, 1988).

The survey coverage at BESS in 2018 was poor (Figure 3.7.1) so we cannot easily compare the abundance and distribution of zoogeographical groups in 2018 with previous years. 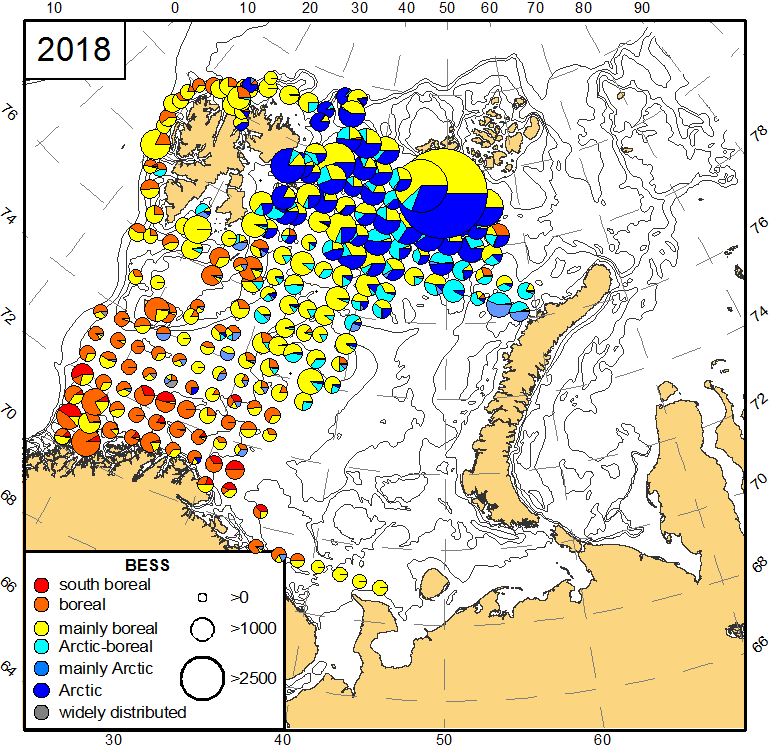 Figure 3.7.1 Distribution of non-commercial fish species from different zoogeographic groups during the ecosystem survey 2018. The size of circle corresponds to abundance (individuals per nautical mile, only bottom trawl stations were used, both pelagic and demersal species are included). Taken from the 2018 BESS survey report (Prokhorova et al 2019).

We calculated average catch rates by zoogeographical groups by TIBIA area (see section 2.1). These are presented in Figure 3.7.2.  An increase in Mainly boreal species are evident in the Central Bank are, Southeastern Basin, Pechora Sea, North East, Great Bank, Franz Josef Land and the Victoria Trough area and a decline in catch rates Arctic species was evident in the Central Bank, Great Bank and Southeastern Basin and Pechora Sea. Our results are in agreement with findinga by e.g. Fossheim et al( 2015), Johannesen et al (2017), and Frainer et al (2017) using different methods based on fewer years from the same survey.

A preliminary check to see how the zoogeographic groups which are primarily defined based on distribution in relation to water masses (Andriashev and Chernova 1994) correspond to a classification based on life history traits (see Frainer et al 2018 for details on the life history traits) reveal a relatively good consistency (Figure 3.7.3 ) but this needs to be further explored in detail, including also data on distribution within the Barents Sea and abiotic habitat variables. Three main clusters were identified, one included the most species and grouped most of the Arctic species, a second smaller group consisted of six species (one Boreal, one Arctic and four Mainly Boreal) whereas the third group consisted of Widely Distributed, South boreal, Boreal and Mainly Boreal species. 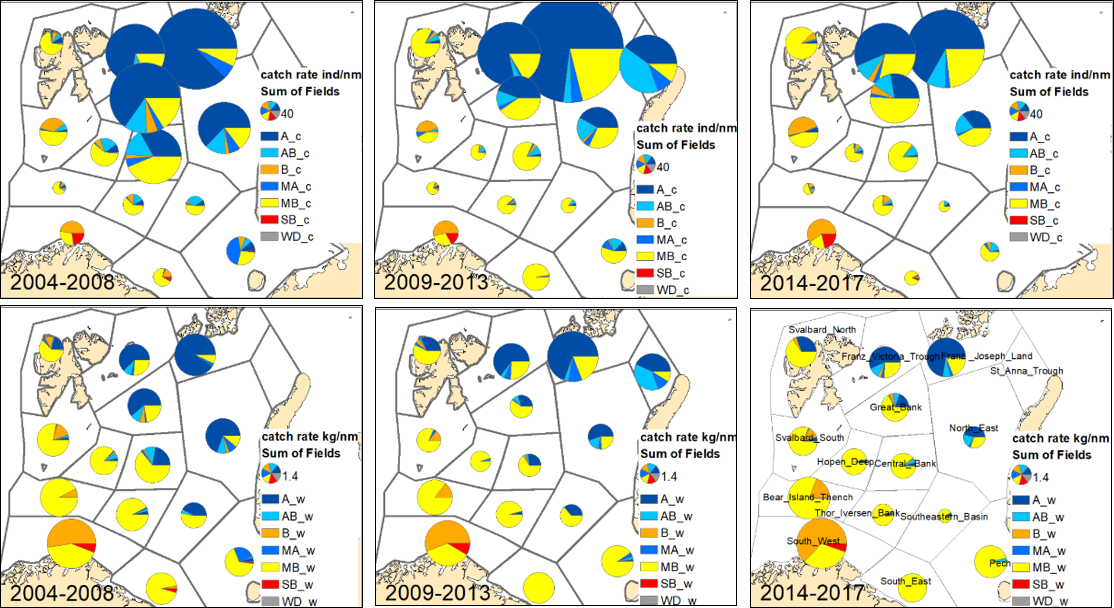 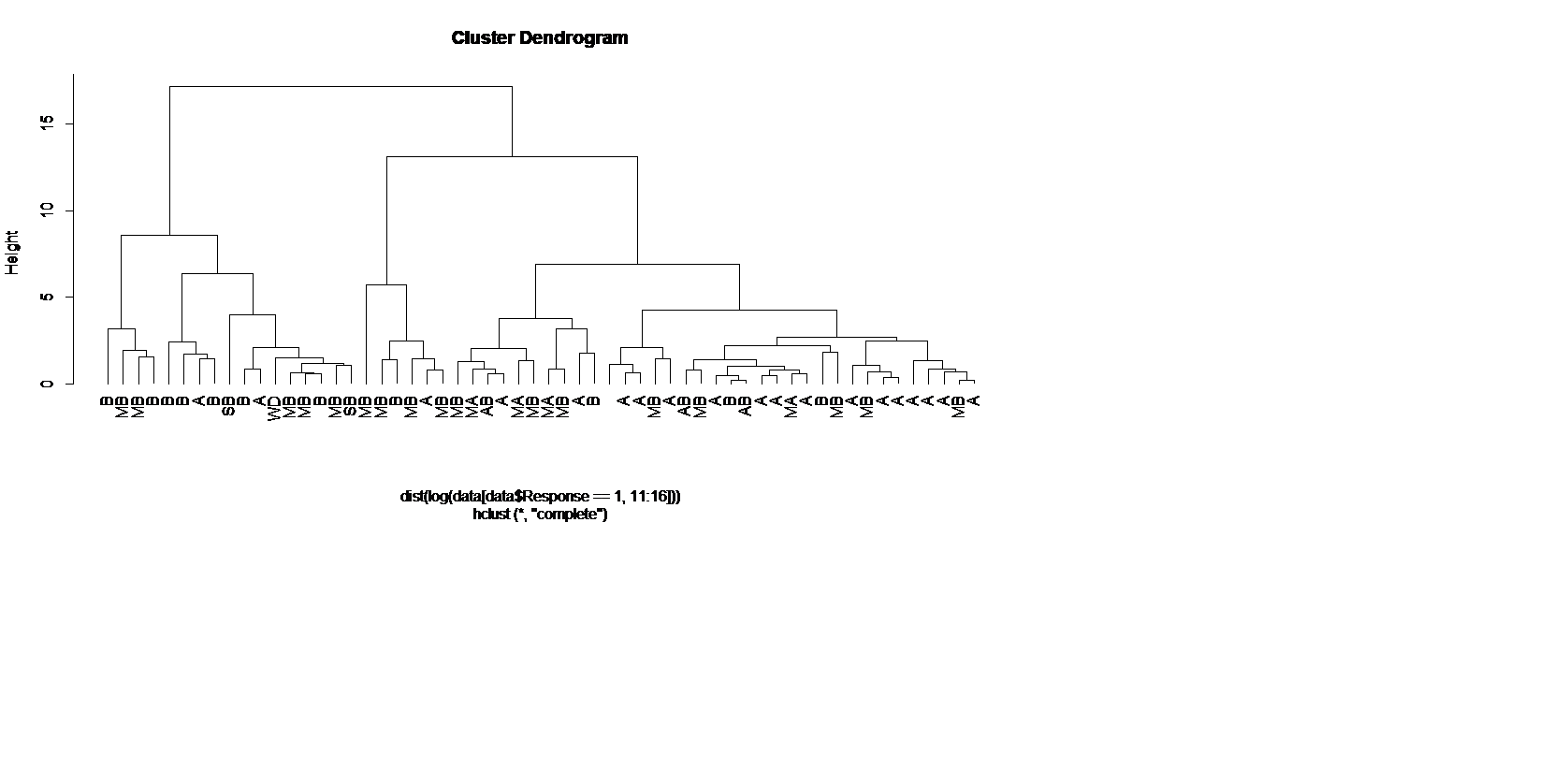 The biogeographical status of the Barents Sea can be temporally assessed by drawing the boundary between the Arctic and the Boreal areas for different time periods. The temporal fluctuation of this boundary reflects the water temperature impact on the bottom fauna. To visualize this boundary and areas with prevailing of Boreal and Arctic component of the fauna, the Biogeographical Index (BGI) (Manushin et al., 2012) was used:

BGI shows the ratio between the boreal and the arctic components of the fauna. The value of the BGI varied from -1 (only Arctic species) to +1 (only boreal species). In the case of no, or equal, amounts of boreal and Arctic species, the BGI for a station is zero. These stations where BGI=0 are the hypothetical boundary between the Atlantic boreal and Arctic biogeographical regions.
The distribution of the BGI values in the Barents Sea during the period between 2005-2017 shows that Arctic species dominate in the north and eastern Barents Sea while the southern and western parts are dominated by Boreal species, and that these two regions are separated by a temporally varying Boreal-Arctic boundary (fig. 3.7.4). 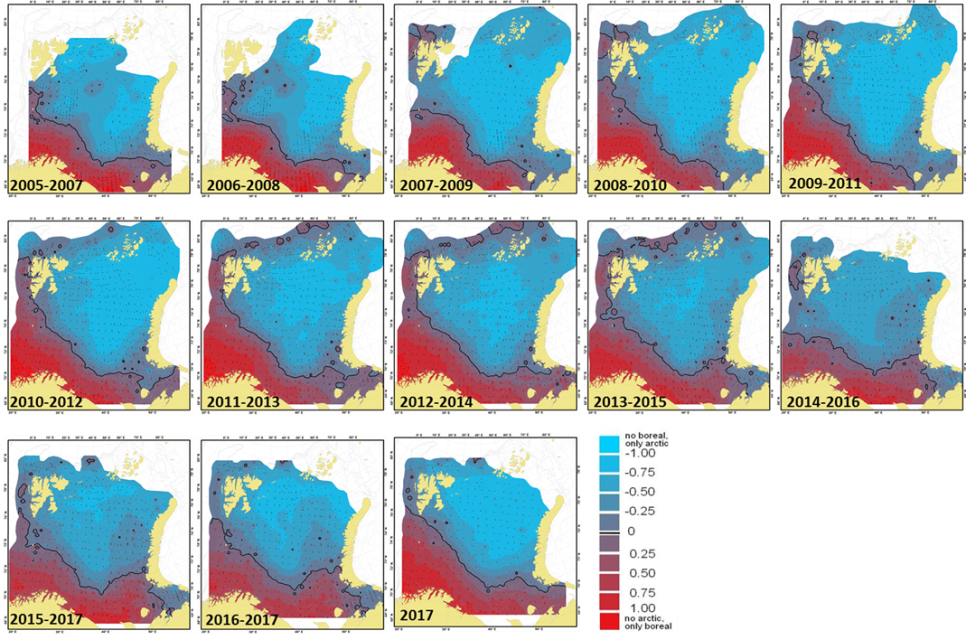 Figure 3.7.4. The temporal distribution of the Arctic (blue) and boreal (red) regions of the Barents Sea from 2005 to 2017. The black line shows the position of the boreal-Arctic boundary.

The position of the boreal-Arctic boundary varies between years and locations (fig. 3.8.1). In the southeastern part of the Sea, the positions of the boundary changed in the order of 150-200 nm during 2005-2017, about 150 nm on Spitsbergen Bank, and less than 50 nm in the central part of the sea. The inter-annual fluctuation in the boreal-Arctic boundary position is most distinct in the south-eastern part of the Barents Sea and demonstrates two periods – during 2006-2010 the boundary moved towards the south-west (upper five pictures in fig. 3.8.1), while during the next six years (2011-2016) it moved back in a northwards direction.

There are the reason to suggest that both the minimum value of BGI and shift in the boundary between the Arctic and the boreal areas toward the most southern position in 2009-2011 may be caused by the 2003 year, coldest since beginning of the century, i.e. six-eight years before, also resulting in the largest negative anomaly of megabenthos biomass in 2010 (see section 3.4.1). 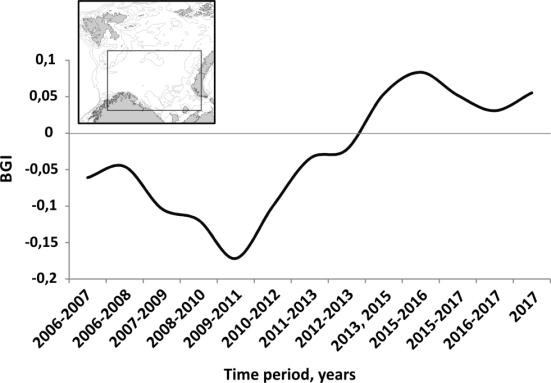