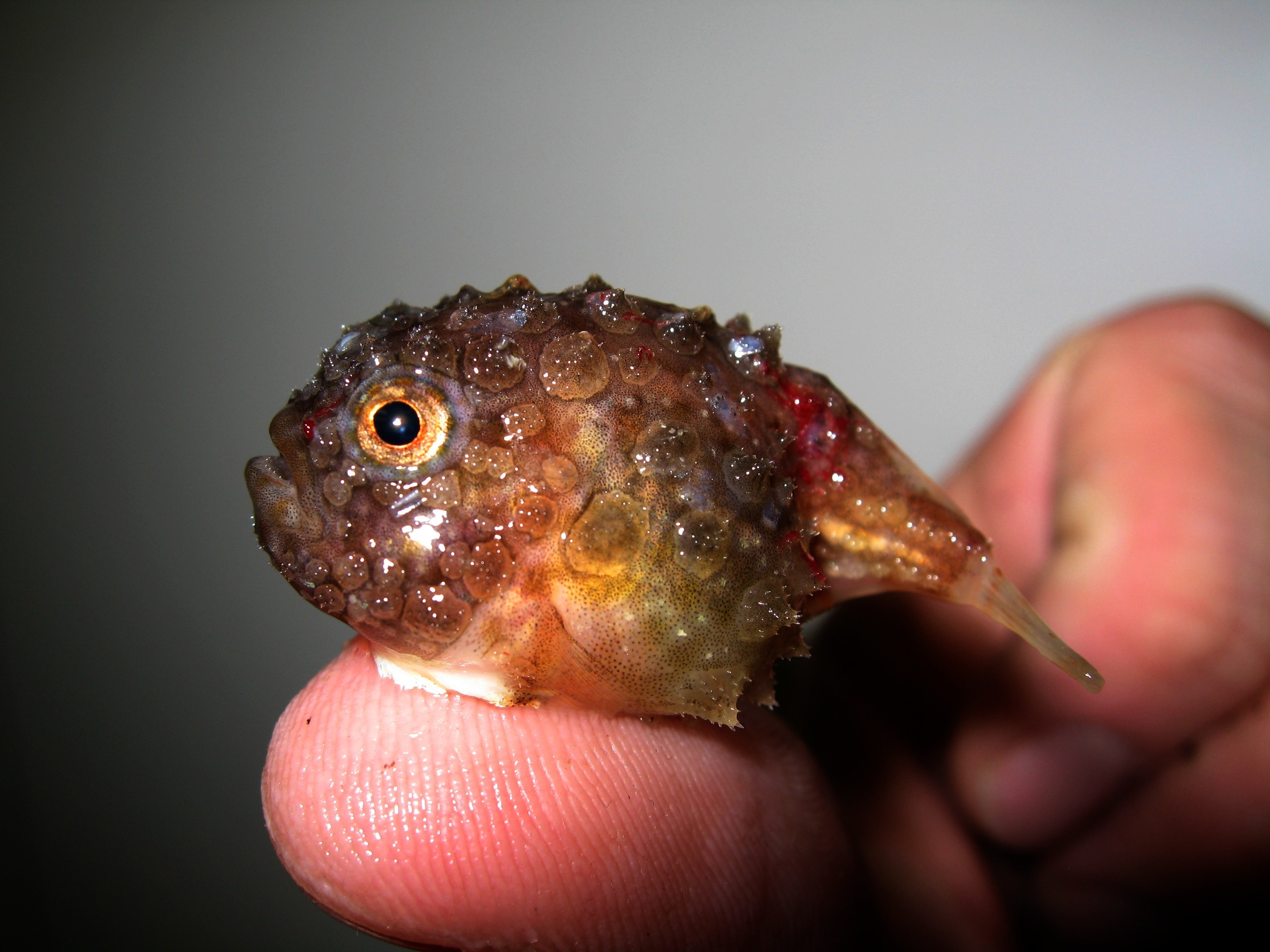 Abundance estimates are available for commercial species that are assessed routinely at the ICES AFWG. Figure 3.7.1 shows such biomass estimates for cod, haddock, and saithe (Pollachius virens) calculated in 2020. Saithe occurs mainly along the Norwegian coast and along the southern coast of the Barents Sea; few occur farther offshore in the Barents Sea itself. Total biomass of these three species peaked in 2010-2013 and has declined since; but remains above the long-term average for the time series dating back to 1960. Greenland halibut and deepwater redfish (Sebastes mentella) are important commercial species with large parts of their distribution within the Barents Sea. Time-series of biomass estimates for deepwater redfish and Greenland halibut are much shorter than those for haddock, cod, and saithe. Other than these main commercial stocks, long rough dab is the demersal stock with the highest biomass. Overall, cod is the dominant demersal species. 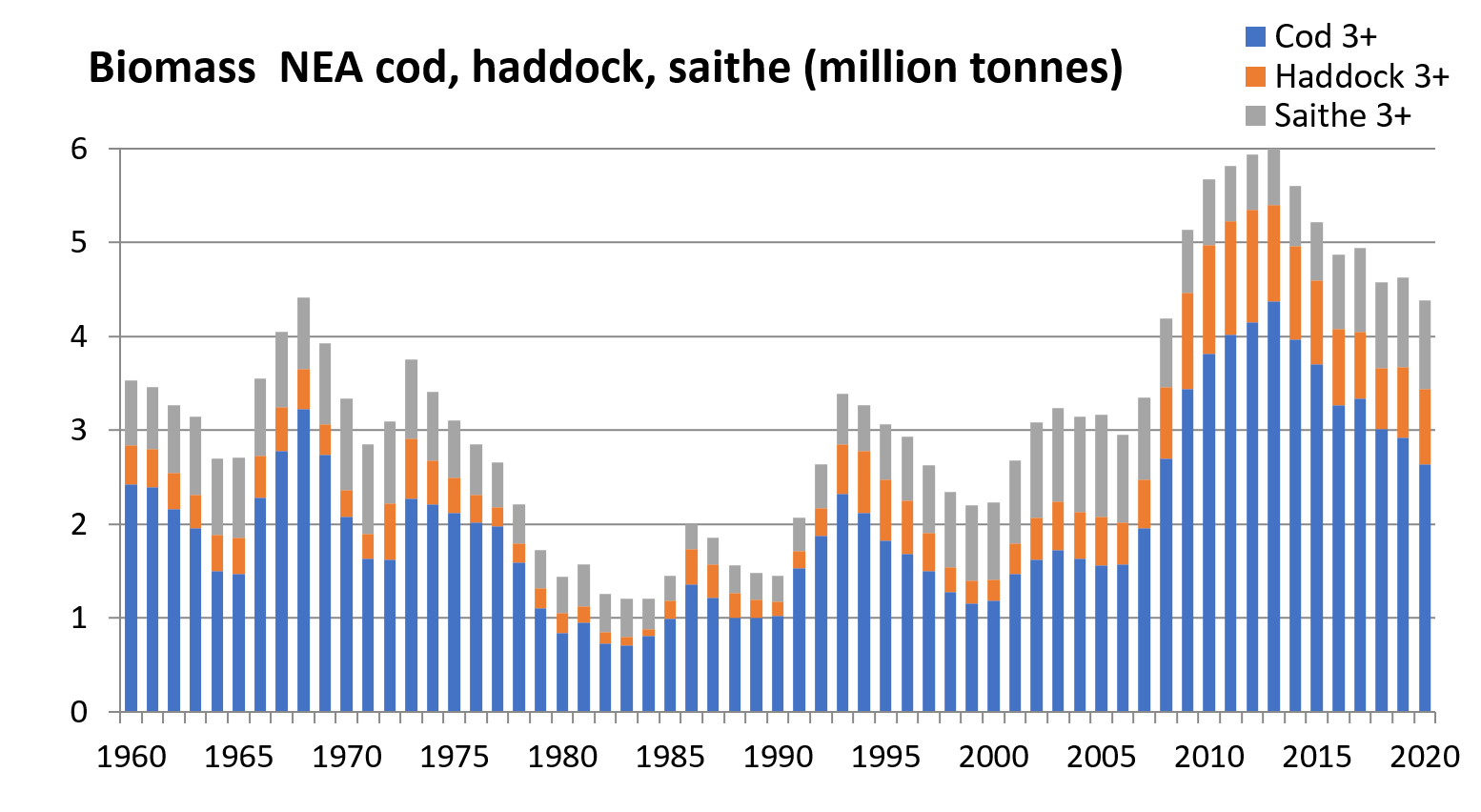 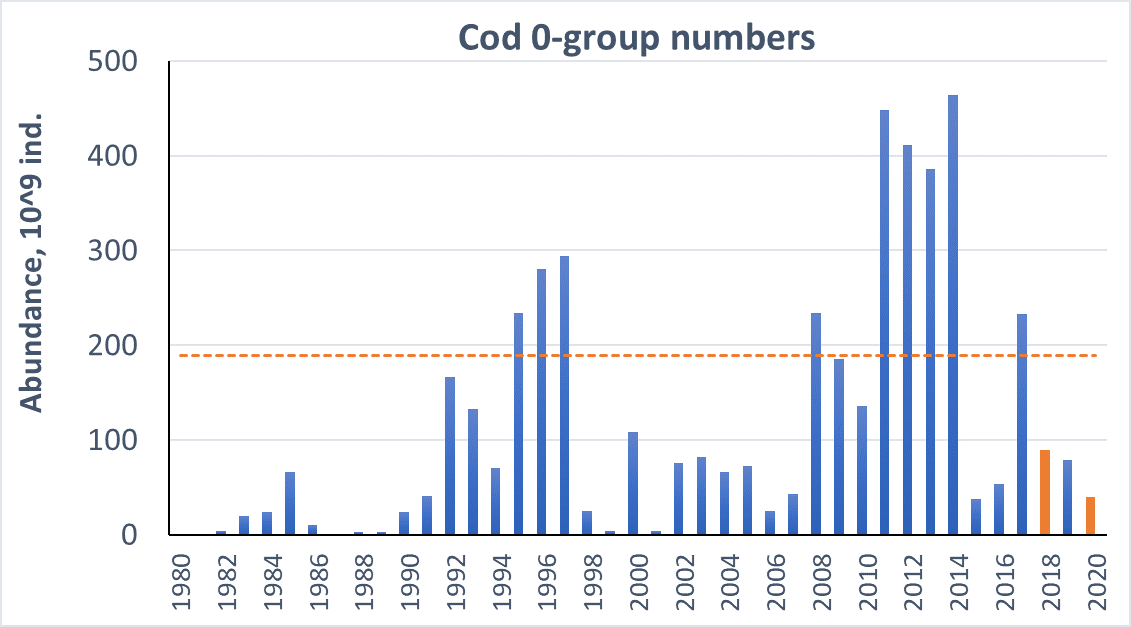 Figure 3.7.2. 0-group cod abundance estimates and fluctuation 1980-2020. Orange line shows the long-term average; the blue columns indicates fluctuating abundance; orange columns indicate corrected indices. Note that estimates were calculated in R for the new 15 subareas in the Barents Sea for 2019 and 2020. Abundance indices for cod in 2018 and 2020 were underestimated due to lack of coverage in the eastern Barents Sea.

Cod one year and older

The northeast Arctic cod stock is currently in good condition, with high total stock size, and high spawning-stock biomass (Fig. 3.7.4). 0-group abundance was very high in the beginning of the last decade (2011–2014); but this has not resulted in strong year classes, as seen from the updated stock-recruitment plot shown in Fig. 3.7.6. 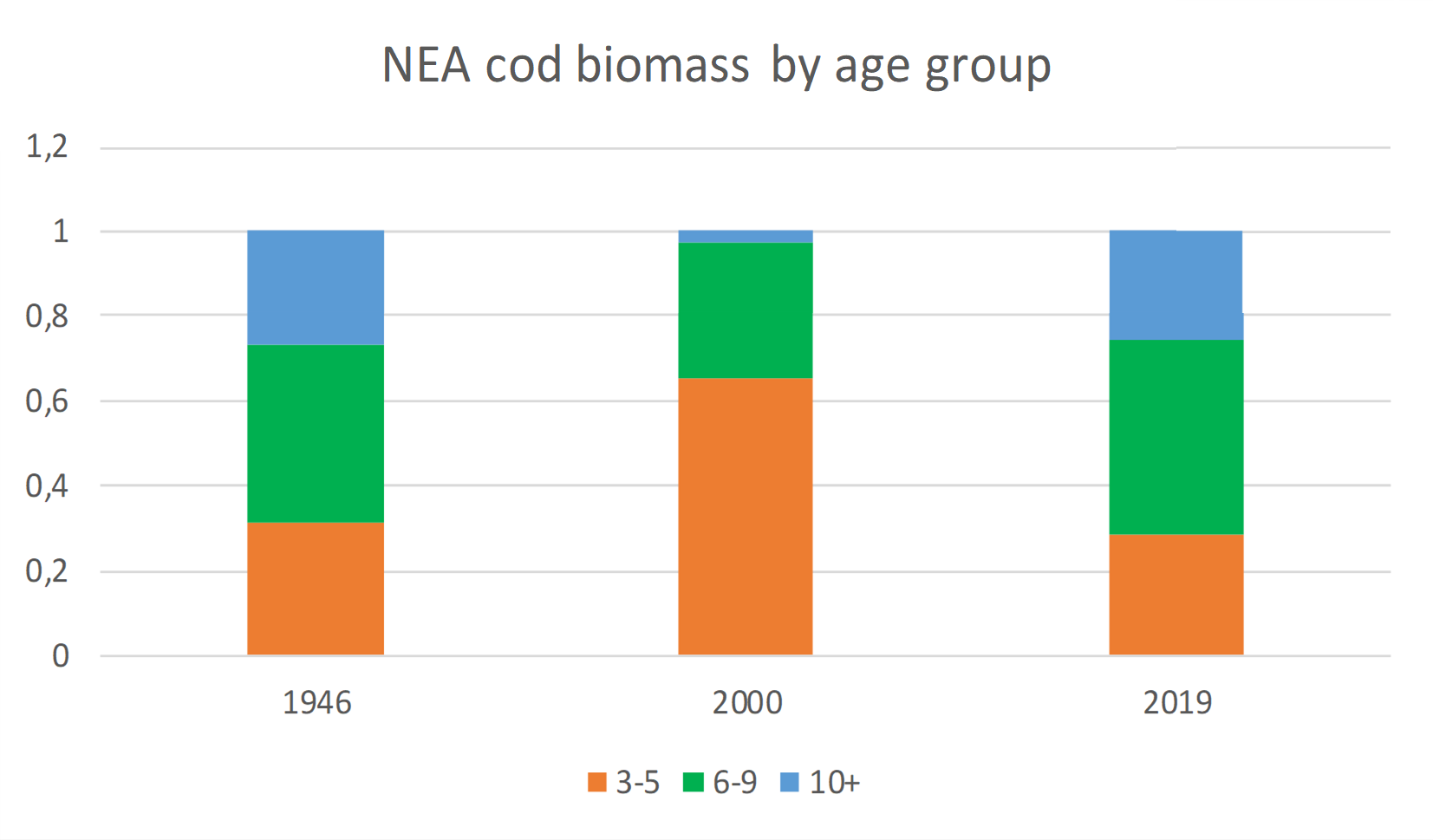 Cod expanded the area occupied during the period, as seen from the average distribution for three periods (2004-2009, 2010-2014, and 2015-2019, Fig. 3.7.8). Higher catches of cod were distributed over larger area during the 2004-2009 period, while distribution was limited in the north and northeast Barents Sea. During the 2010-2014 period, higher catches of cod were observed mainly in the north and southeast, while their distribution extended northward and slightly north-eastward. Occupation of larger areas and redistribution of higher catches was most likely influenced by record high stock sizes, dominated by larger and older fish. During the 2015-2019 period, smaller catches of cod were taken in the northern and eastern areas compared to the 2010-2014 period, and the northern limit of the distribution in the area between Spitsbergen and Frans Josef Land was shifted southwards from 2017 to 2019. Since 2004, ice free areas have generally increased in the northern Barents Sea, increasing areas of suitable habitat for cod and allowing record high production. However, a notable decrease in ice-free areas was observed in the winter survey 2019 compared to previous winter surveys, and preliminary reports from the 2020 winter survey indicate a further decrease in 2020. In winter 2021 the ice-covered area in the eastern Barents Sea was larger than in previous years, while there was more open water than usual north of Spitsbergen. 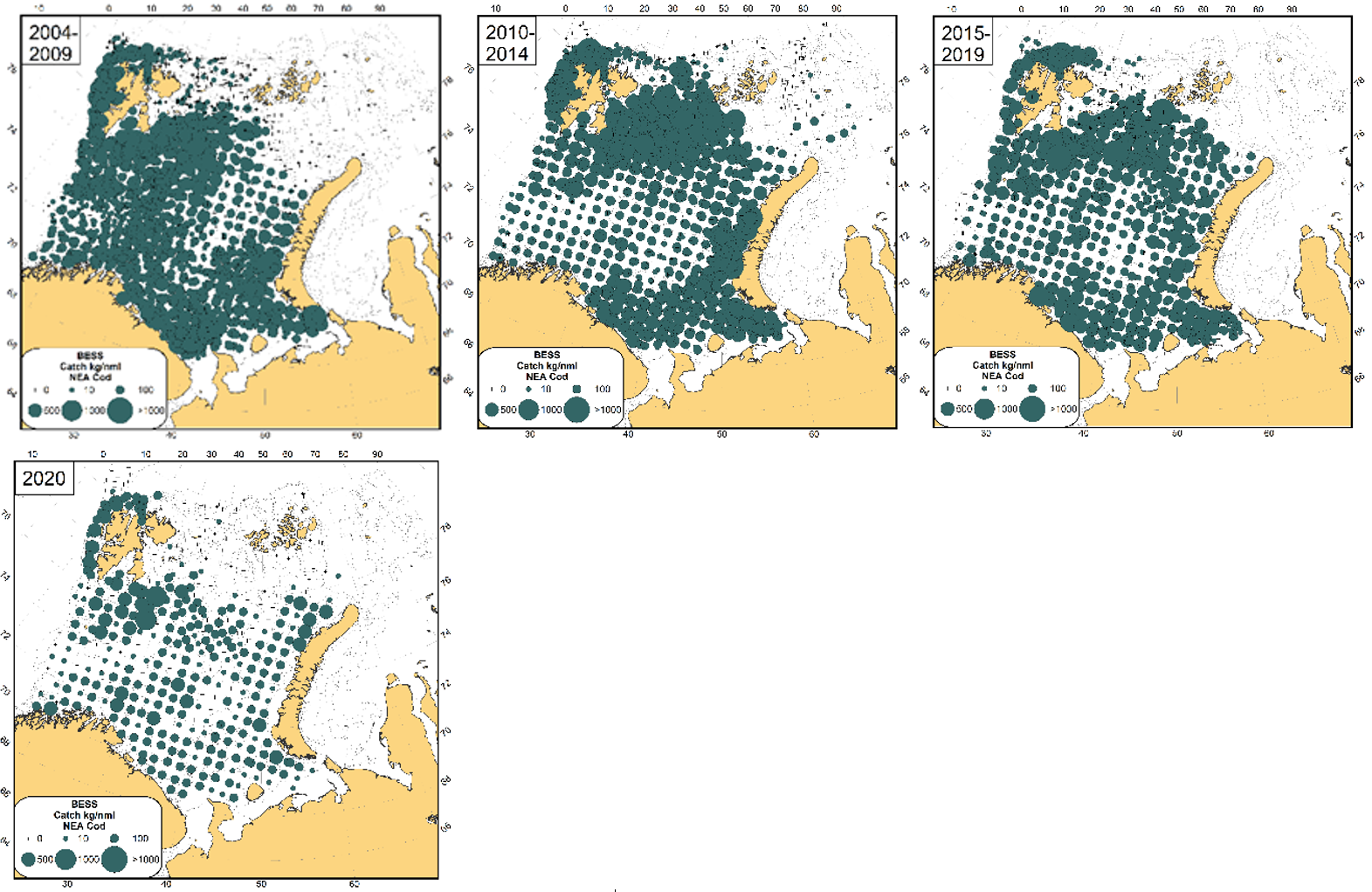 Figure 3.7.9 shows the distribution of cod ≥50cm based on data from the winter survey (January-March during 2008, 2011, and 2019. Note: the survey area was extended northwards in 2014 and coverage is often limited by ice conditions. Cod distribution observed during this survey increased throughout the period, but it is unknown when cod began to inhabit areas north of Bear Island and west of Svalbard during winter. 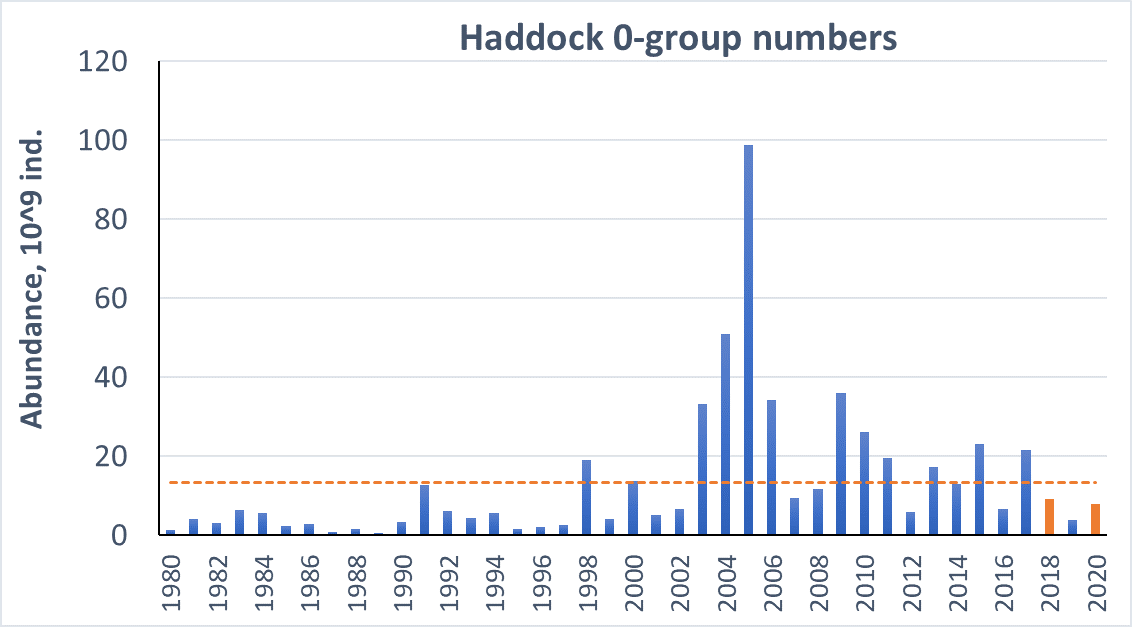 Haddock one year and older

The Northeast Arctic haddock stock reached record high levels in 2009–2013, due to very strong 2004-2006-year classes. Subsequent recruitment has normalized; the stock remains at a relatively high level and the decline in recent years has now stopped. The abundant 2016-year class may help keeping the stock at this level. (Fig. 3.7.12 and 3.7.13). The large spawning stock did not, until 2016, result in strong year classes (Fig. 3.7.14). It should be noted that the quota (TAC) was not taken in 2020, and that preliminary results from the ecosystem survey in 2020 indicate considerably lower abundance than expected, in particular of older age groups. 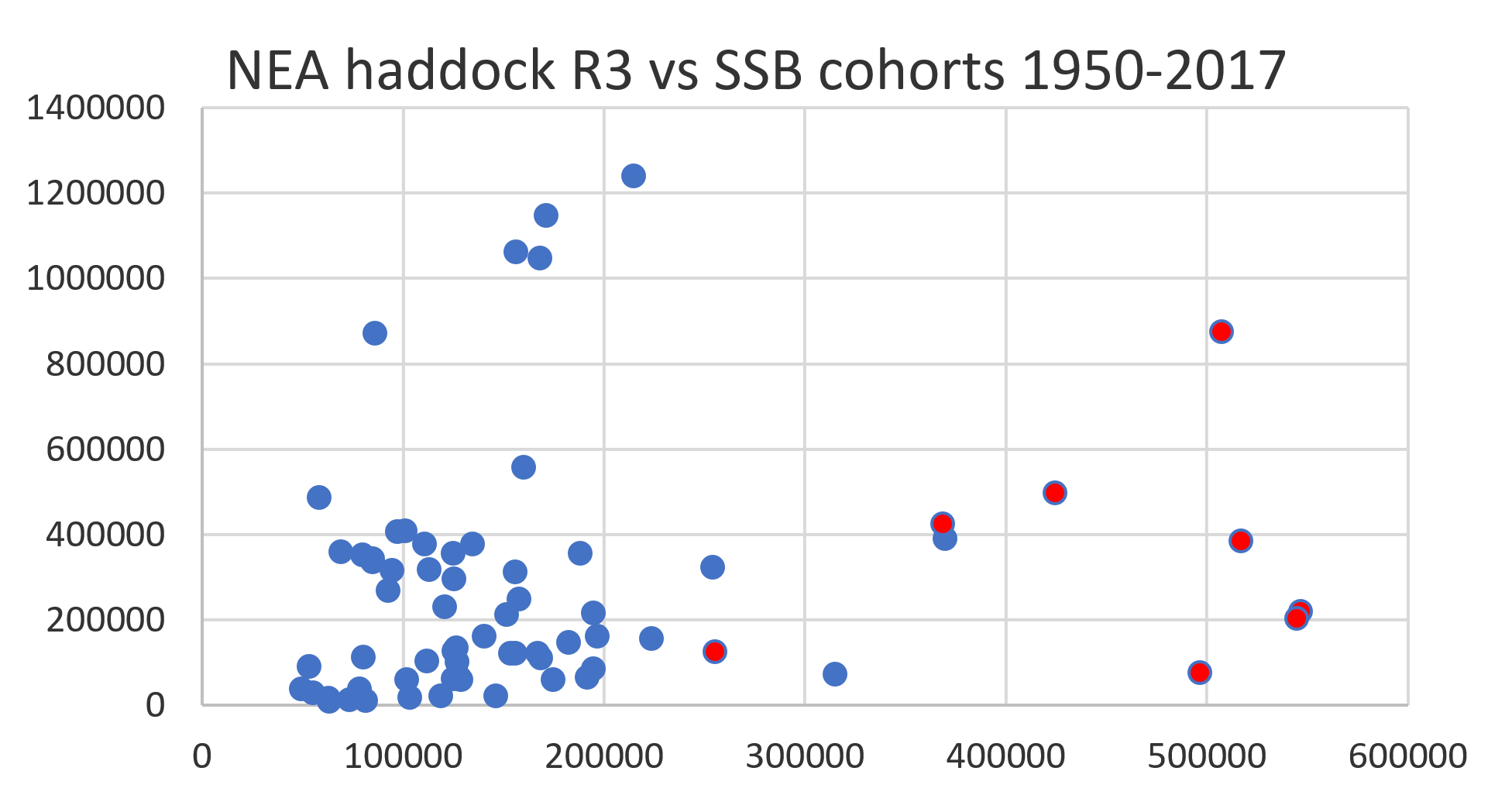 The distribution of haddock ≥ 50cm based on winter survey data (January-March) from 2013 (record large spawning stock), 2019, and 2020 are shown in Fig. 3.7.16. Note that the survey area was extended northwards in 2014 and that coverage often is limited by ice extent. Haddock distribution observed during this survey increased during this period, but when haddock began to inhabit areas north of Bear Island and west of Svalbard during winter is unknown. 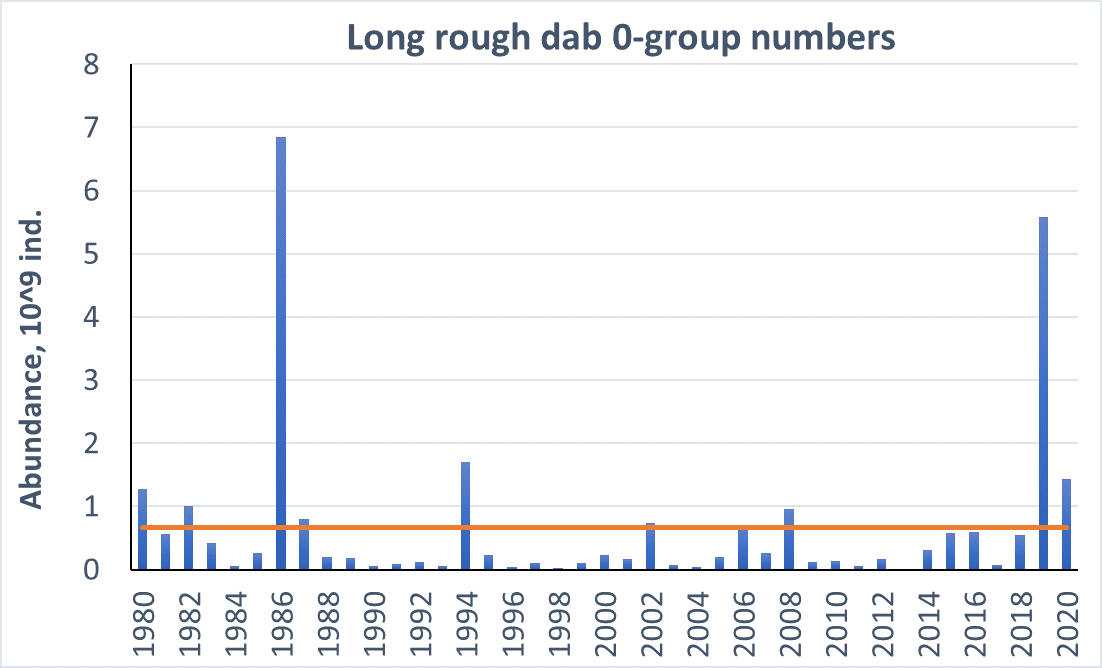 Older long rough dab (age 1+) are widely distributed in the Barents Sea. Usually major concentrations of long rough dab are distributed in the central, northern, and eastern parts of the Barents Sea. LRD is a very numerous species. The total number of LRD in the Barents Sea can be more than 5109 individuals (Fig. 3.7.19). Long rough dab abundance estimates based on results from the BESS time-series (August–September) have been relatively stable during the current decade. Many small fish were observed in trawl catches especially in eastern areas during the 2015-2017 BESS. The 2018 index was not calculated due to limited survey coverage in the eastern region of the Barents Sea and in 2019-2020 the index was estimated somewhat above the mean for period 2004-2020. (Fig. 3.7.19).

In 2020, the total abundance index for 0-group fish were 50.6 million individuals. Estimated biomass was 0.104 thousand tonnes. The abundance indices for 0-group Greenland halibut for 2018 will be re-calculated later and presented in the WGIBAR report in 2022.

The adult component of the stock was, as usual, mainly distributed outside the ecosystem survey area, i.e. on the slope. The abundance on the slope has decreased in recent years (Fig 3.7.20). In recent years, however, an increasing number of large Greenland halibut has been captured in deeper waters of the area surveyed by the BESS (Fig. 3.7.21). Northern and north-eastern areas of the Barents Sea serve as nursery grounds for the stock. Greenland halibut are also relatively abundant in deep channels running between the shallowest fishing banks. 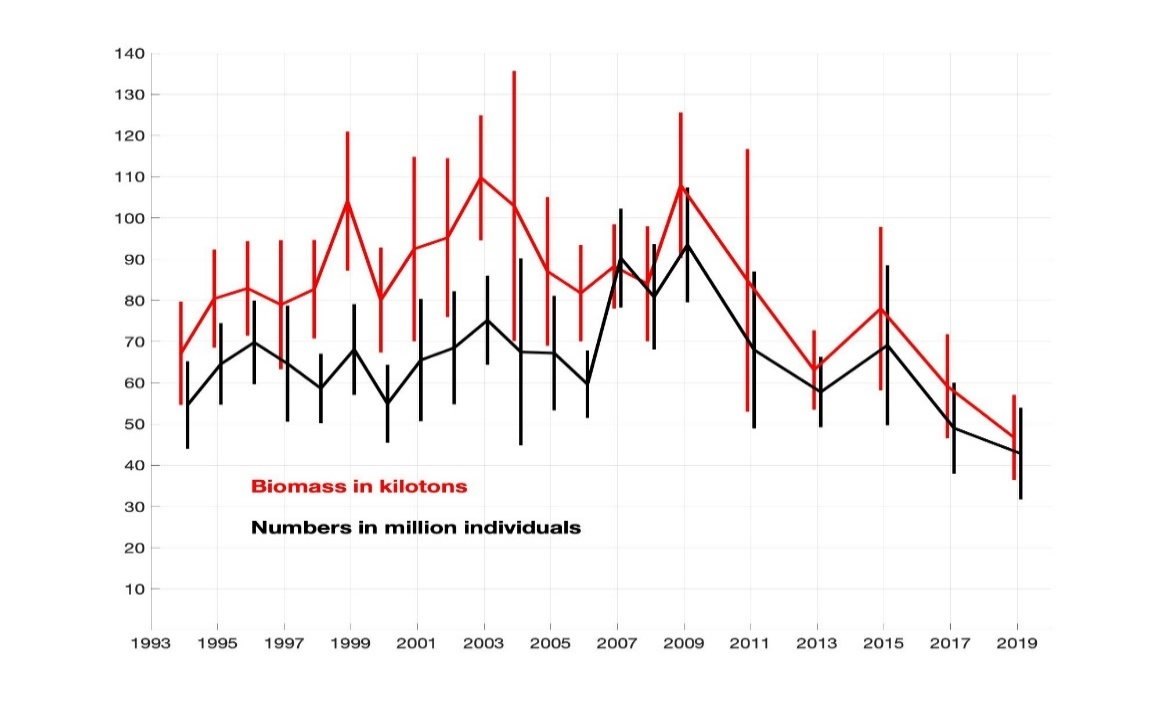 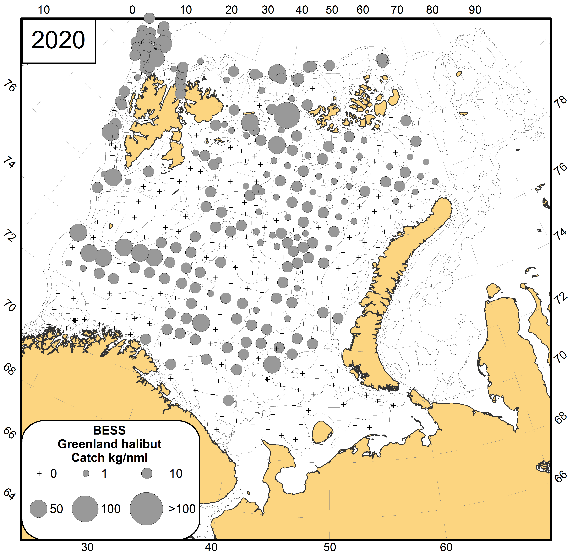 Figure 3.7.21 Greenland halibut distribution (specimens/nautical mile) during August–September 2020 based on the BESS data. 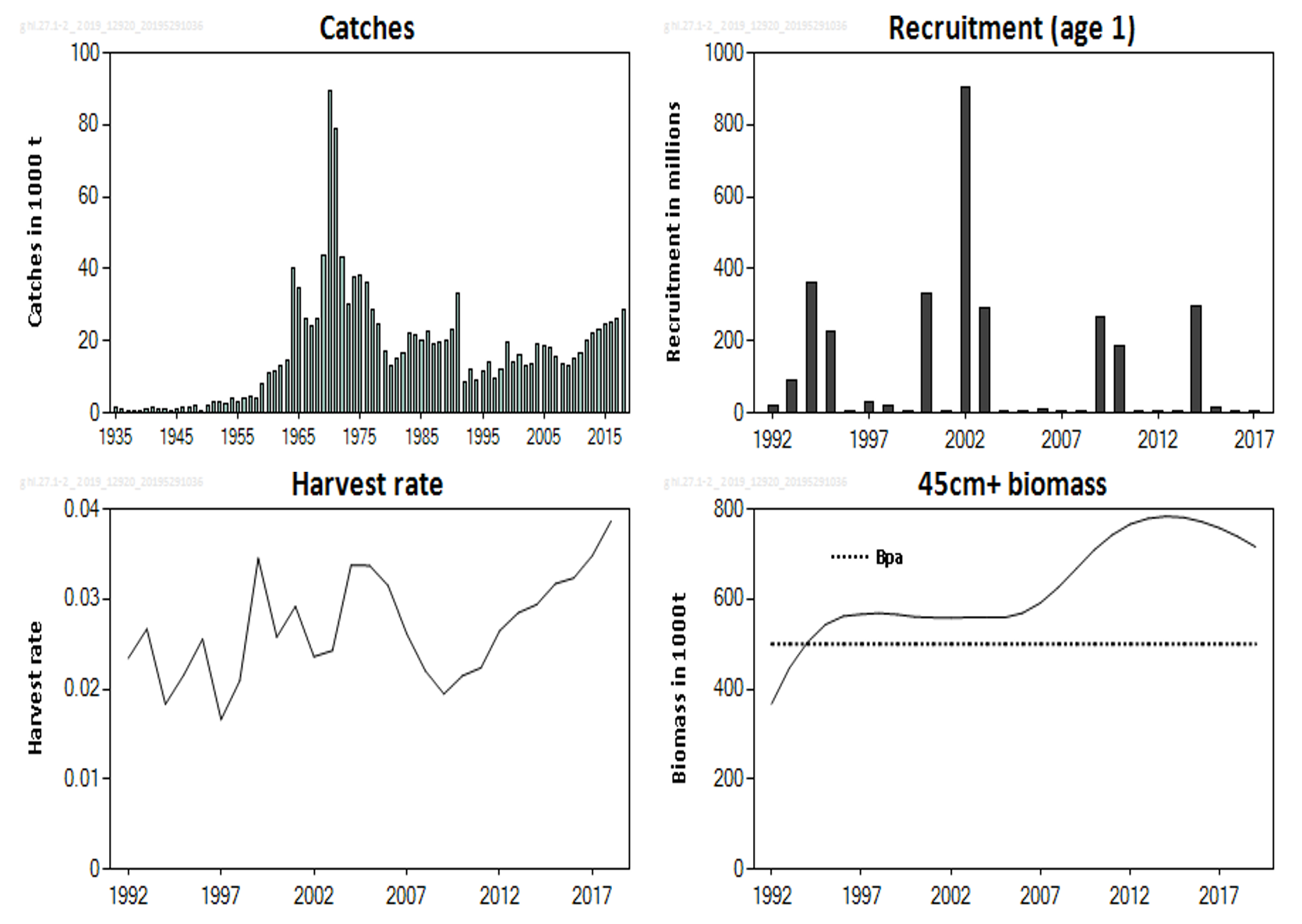 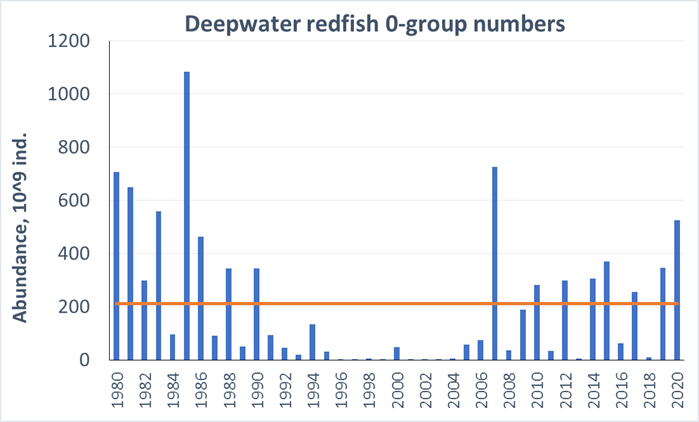 Figure 3.7.23. 0-group deepwater redfish abundance (corrected for trawl efficiency) in the Barents Sea during 1980-2020. Orange line shows the long-term average; the blue columns indicates annual abundance. Note that the 2018-2020 estimates were calculated in R for the new 15 subareas in the Barents Sea.

In 2020, deepwater redfish were widely distributed in the Barents Sea. During the BESS and the winter survey, the largest concentrations were observed, as usual, in western and north western parts of the Barents Sea. Biomass was higher during 2013–2020 than in preceding years. Geographic distribution of deepwater redfish during the 2020 BESS is shown in Fig. 3.7.24. Most of the adult fish are observed in the Norwegian Sea. Stock development trends from the latest ICES AFWG assessment are shown in Fig. 3.7.25. During the last decade, the deepwater redfish total stock biomass has remained relatively stable around 1 million tonnes. 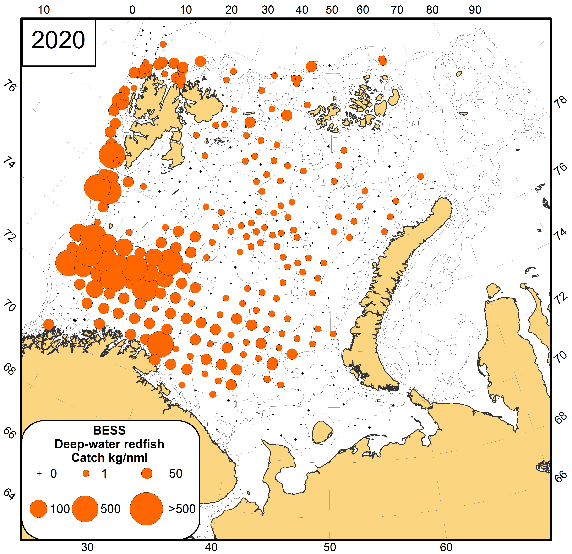 Figure 3.7.24. Geographic distribution of deepwater redfish during the 2020 BESS survey. 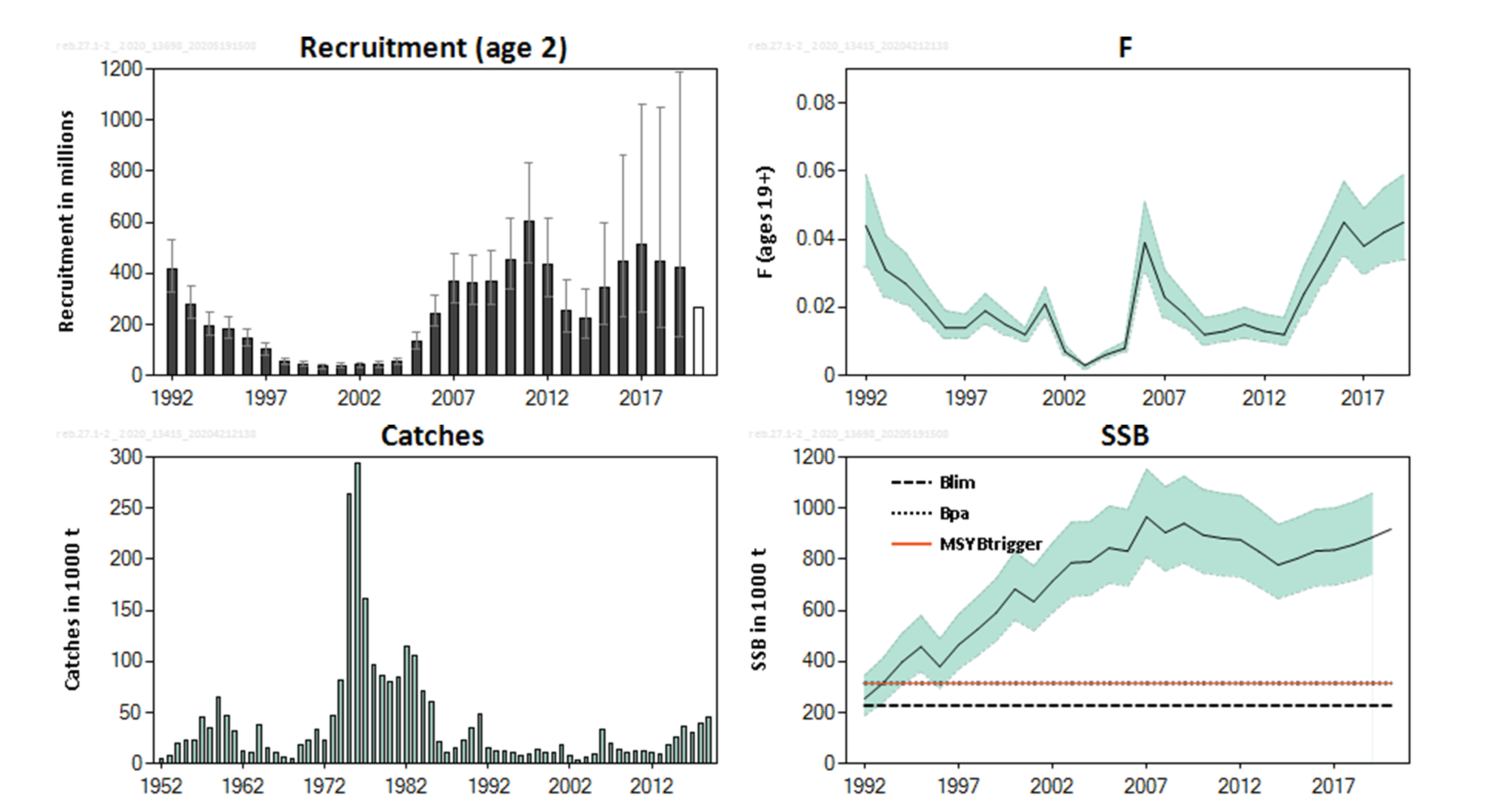