A rapid decline in stock size was recorded from 2014 and in 2015-2016 the total stock size was below 1 million tonnes. The capelin stock size estimate from 2017, however, contrasted the two previous years and was so much higher that the results from 2016 and 2017 were incompatible when comparing cohorts (Skaret et al., 2019). For several reasons, the Arctic Fisheries Working Group concluded in 2017 that the 2017 survey was the more reliable of the two. Skaret et al. (2019) came to the same conclusion after having considered several possible reasons for either an underestimate in 2016 or an overestimate in 2017. Observations from the fisheries in 2018 and the autumn acoustic estimate of capelin in 2018, which was in line with the survey in 2017, strengthened this conclusion. The survey in 2019 once more found the stock to be in very bad shape, while in 2020, the stock number was again much higher. The number of recruits was the highest estimated since 2000, and that fits well with the observations of a rich year class of 0-group observed in 2019. But like in 2016-2017, the estimates in 2019 and 2020 are not compatible for older year classes, the 2018 year class was estimated to be double as numerous in 2020 as estimated in 2019, clearly indicating that either the 2019 estimate was an underestimate or that 2020 is an overestimate. It is unreasonable that the natural mortality should change so much from year to year, and one may question whether the surveys in recent years have given a reliable picture of the real trends in stock size.

Previous collapses have had serious effects cascading both upwards and downwards in the food web. Reduced predation pressure from capelin has led to increased amounts of zooplankton during periods of capelin collapse. When capelin biomass was drastically reduced, its predators were affected in various ways. Cannibalism became more prominent in the cod stock, cod growth was reduced, and maturation delayed. Seabirds experienced increased rates of mortality, and total recruitment failures; breeding colonies were abandoned for several years. Harp seals experienced food shortages, and recruitment failure, and increased mortality; partly because they invaded coastal areas and were caught in fishing gear. The effects were most serious during the 1985–1989 collapse, whereas the effects could hardly be traced during the third collapse. Gjøsæter et al. (2009) concluded that these differences in effect likely resulted from increased availability of alternative food sources during the second and third collapses (1990s and 2000s). It is too early to draw firm conclusions about cascading effects related to the “mini-collapses” observed recently, since it may take some years before lagged effects are observable.

The capelin stock collapses were caused by poor recruitment, most likely in combination with low growth and increased predation pressure. It is likely that high levels of fishing pressure during 1985–1986 amplified and prolonged the first collapse. After each collapse, the fishery has been closed and the stock has recovered within a few years due to good recruitment. Several authors have suggested that predation by young herring on capelin larvae has had a strong negative influence on capelin recruitment and, thus, has been a significant factor contributing to these capelin collapses (Gjøsæter et al., 2016), while others (Dolgov et al., 2019) claim that other reasons for the periodic recruitment failures could be more important.

Capelin is a short-lived species and thus the stock size variation is strongly influenced by the annual recruitment variability (Figure 4.3.1). There was a better correspondence between the abundance of 0-group and one-year-olds in the first half of the time period where both estimates are available. In recent years, very high but fluctuating estimates of 0-group were obtained and the mortality from age 0 to age 1 has seemingly increased. Especially the year classes 2007-2010, 2012-2013 and 2016-17 were heavily reduced in size from the 0-group to the 1-group stage. While the three first capelin stock collapses were initiated by increased mortality at the early larval stage, between the larval survey in May-June and the 0-group survey in August, the increased mortality on young capelin in recent years is seemingly occurring later; between the 0-group survey and the acoustic measurement of the 1-year-olds. The reasons for this seemingly increased natural mortality at this stage is unknown but could likely be caused by other factors than those in effect during the collapses in the 1980s, the 1990s, and the 2000s. In 2019, a record strong year class accrued, and 1-year old capelin (2019-year class) completely dominated in the capelin stock in 2020. 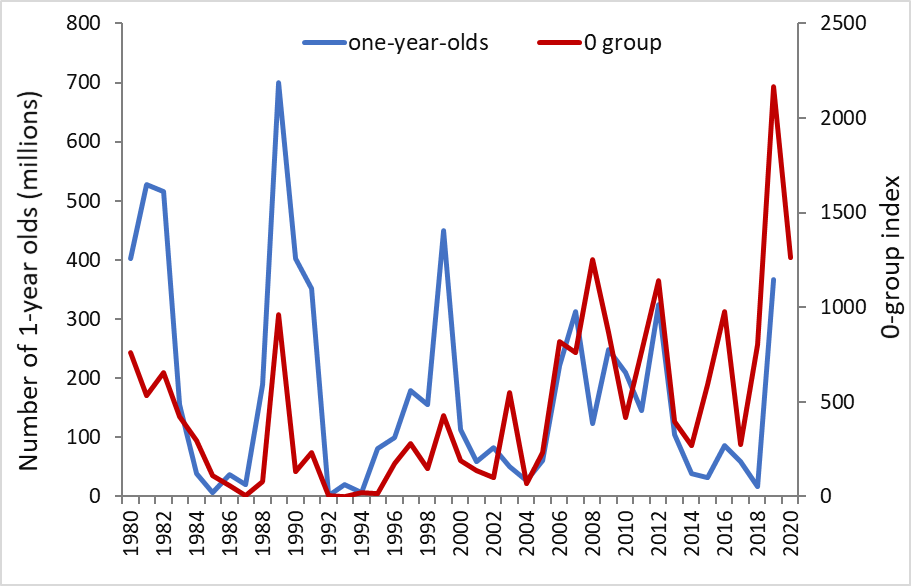 Figure 4.3.2 shows a stock–recruitment plot (updated from Gjøsæter et al. (2016)) for the year classes 1973-2019. The SSBs are those estimated by the assessment model for capelin (ICES 2020a). The points are coloured according to the amount of young herring estimated to be in the Barents Sea in the spawning year. The amount of herring is the abundance of age 1 and age 2 herring from the assessment model times the mean weight of these age groups (ICES 2020b). The 1989-year class is the strongest year class at age 1 (700 billion). The average recruitment in the period is about 180 billion. It is seen that the recruitment in “red years” are below average recruitment in 13 out of 15 years, while in “green years” the recruitment is below average in 11 out of 18 years. In years with low numbers of young herring in the Barents Sea the recruitment is below average in 5 out of 11 years, and only when the SSB is below 100 kt. This supports the hypothesis that capelin recruitment is negatively affected in years with substantial amounts of young herring in the Barents Sea (Gjøsæter et al. 2016). On the other hand, the general shape of the stock-recruitment relationship, where the highest recruitment is obtained for small to medium SSBs, points to the possibility of cannibalism or other density dependent mortality mechanisms (Dolgov et al., 2019). In any case, the large variability in recruitment clearly indicates an interplay of many factors affecting the recruitment of capelin. 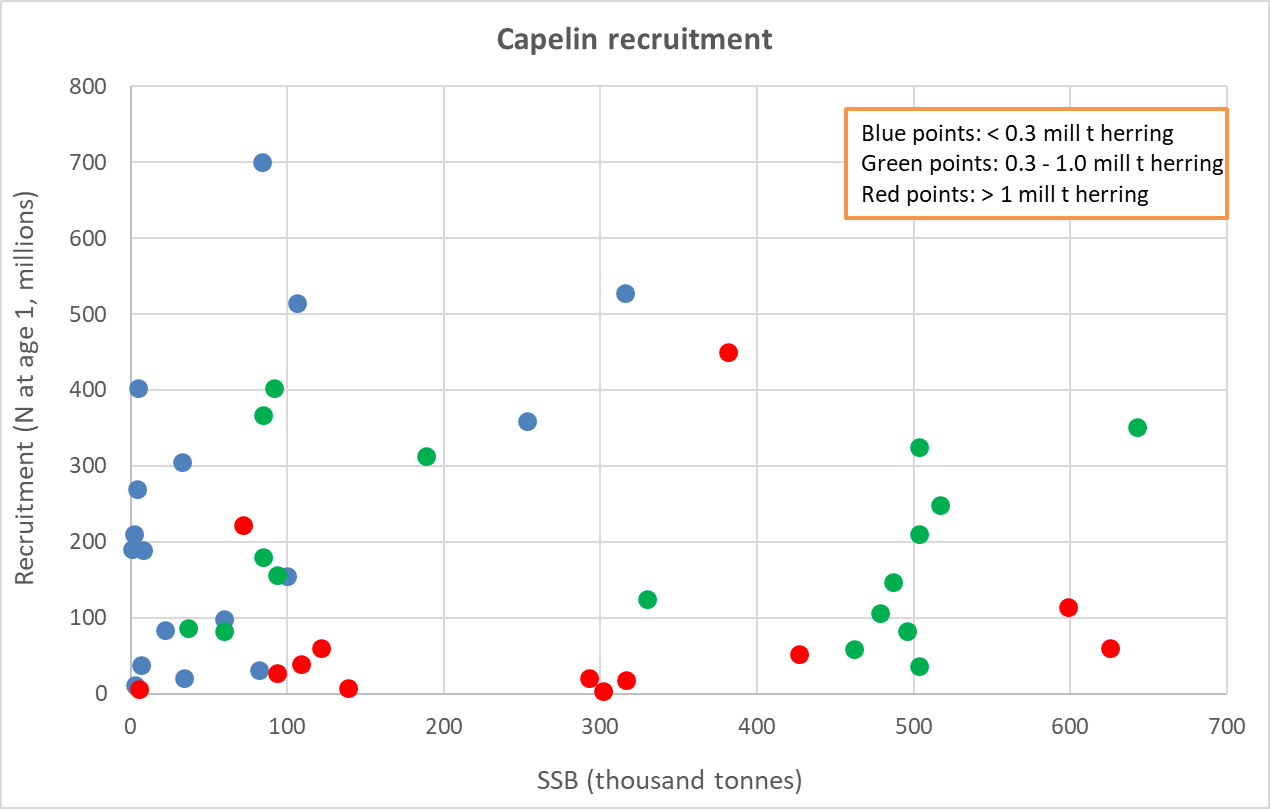 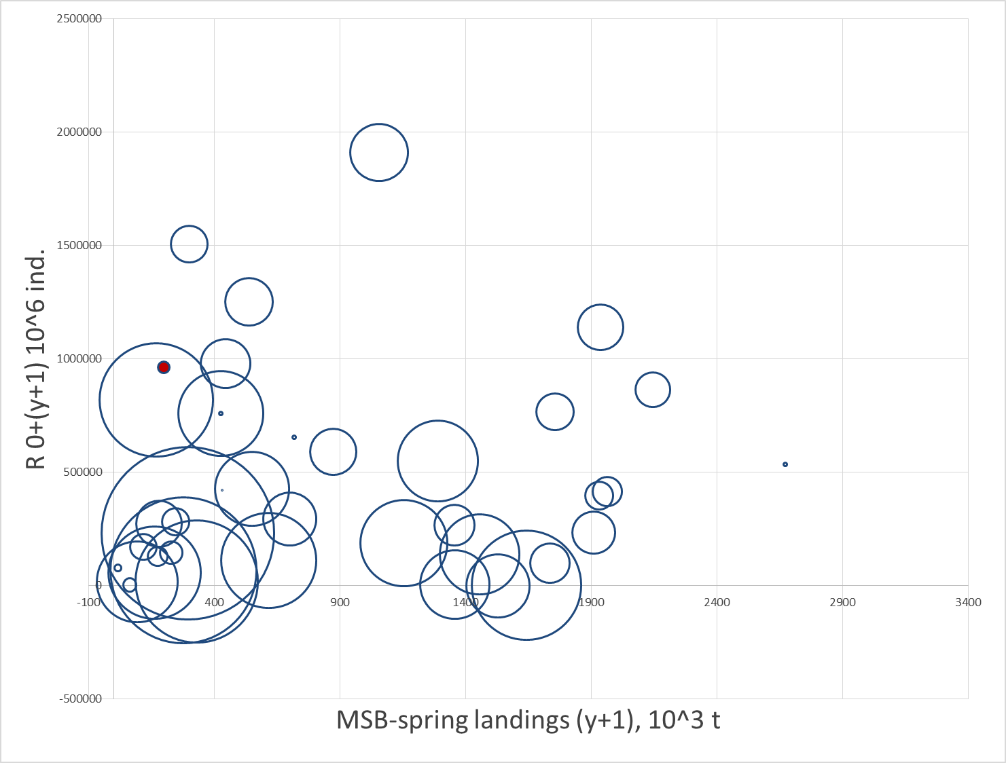