In general, however, there is a low correspondence between changes in horizontal overlap and changes in capelin consumption. In summer, the cod-capelin feeding interaction mainly takes place on the banks of the northern Barents Sea, where cod’s consumption of capelin is more strongly related to vertical overlap with capelin than horizontal overlap. The northward expansion of cod in the 2010s probably also affected the polar cod negatively since polar cod became more available to cod. However, the northern limit of the cod abundance in autumn has moved southwards, which may have been beneficial to the polar cod.

The interaction among cod, capelin, and polar cod is one of the key factors regulating the state of these stocks. However, this interplay is far from fully understood. Cod prey on capelin and polar cod and can strongly influence the numbers of these species, while the availability of these prey for cod varies. In addition, 0-group cod may also feed on 0-group capelin.

A prerequisite for feeding interactions is geographical overlap. The overlap between cod and capelin was relatively low in the period 2004-2015, suggesting a weak aggregative response of cod to capelin (Fall et al. 2018). However, increasing cod population size and water temperatures in this period influenced a northward shift of the late summer overlap area (Fall et al. 2018). The overlap between immature cod and capelin showed a rising trend, while the mature cod-capelin overlap had a less clear trend over time (Fig 4.5.1 A). The overlap area also increased in size, particularly for immature cod, which reflects the northeastwards expansion of the cod stock. The observed increased overlap over time could be interpreted as facilitating increased consumption of capelin per unit of cod stock in recent years. However, when comparing the amount of capelin consumed by cod in the summer-autumn period with the overlap, there is no obvious relationship (Figs 4.5.1 A-B). Consumption by immatures peaked during a period of average overlap, and for mature cod, the overlap trend is a near inverse of the trend in consumption. Generally, correlations between spatial overlap and consumption have been weak in summer, at several spatial scales (Fall, 2019).

Since cod is mainly distributed near the seafloor and capelin in the free water masses, cod may overlap with capelin in the horizontal dimension but still be segregated by depth, always or during parts of the day. A recent study on drivers of variation in cod’s consumption of capelin considered both capelin density (horizontal overlap) and capelin depth distribution (vertical overlap), finding that horizontal overlap had small effects on consumption, while vertical overlap was important (Fall et al. 2021). Even when accounting for variation in capelin depth distribution, changes in capelin density did not have a strong effect on cod consumption (Fall et al. 2021). A potential explanation for this is that once capelin is present, it is present in densities that allow cod to reach satiation (Fall and Fiksen 2019). Cod fed more intensively on capelin when capelin came close to the seafloor, especially at banks and bank edges of the Barents Sea (Fall et al. 2021). Aarflot et al. (2018, 2020) showed that capelin also feed more effectively over the banks where plankton are trapped in shallow and light conditions during the day, pointing to a tradeoff between foraging and predation risk for capelin. How these findings reflect the feeding dynamics in other seasons should be further explored. 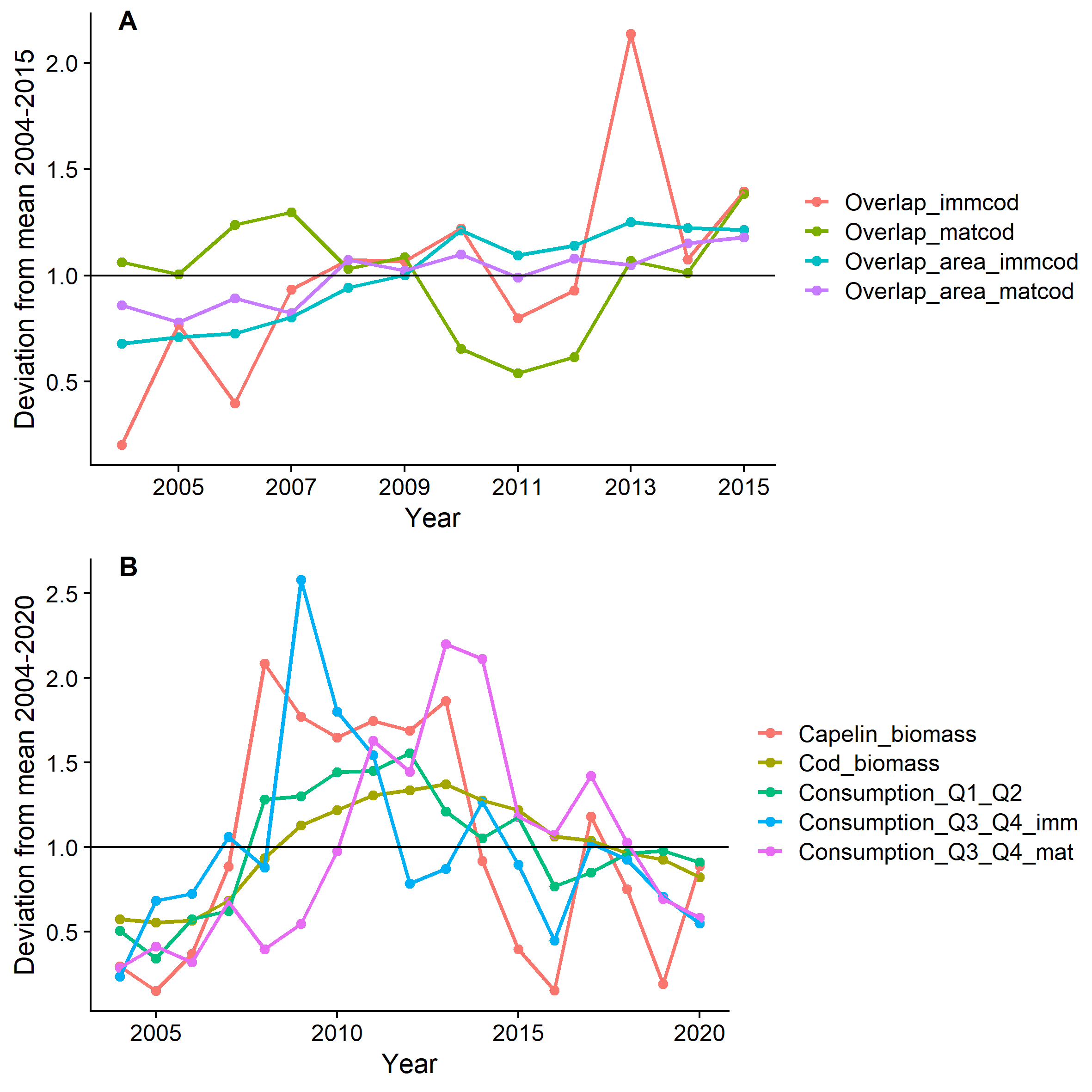 Figure 4.5.1: Deviations from mean A) overlap and size of the overlap area 2004-2015, and B) capelin biomass, cod biomass, and estimated capelin consumption by cod 2004-2020. Panel A shows the same data as Figure 4.2.3 but split on cod maturity stage (age 3-6 were considered immature) with the addition of cod stock biomass. Panel B shows mean overlap and size of the overlap area (overlap extent) from Fall et al. (2018) using predictions from the area north of 74 N.

Cod can prey intensively on polar cod. When polar cod and capelin occur in mixed concentrations, which they often do in northern and eastern areas, polar cod may be easier to catch due to lower swimming speeds (confirmed by trawl catch analyses) and distributions closer to the bottom. However, capelin is a fatter and energetically more valuable prey item. A potential example of this trade-off was seen in cod feeding on mixed aggregations of polar cod and capelin on the Great Bank, where the proportion of polar cod in cod stomachs was higher in the smallest cod (Skaret et al. 2020). According to the estimated consumption of various prey species by cod (Fig 4.2.1-2) the consumption of polar cod is much lower than the consumption of capelin. Overlap between cod and polar cod varied between areas and seasons. In northern and eastern areas cod overlap with polar cod pre-spawners during late autumn-early winter and with younger polar cod during summer -autumn, and as seen during the cod expansion phase when overlap with polar cod increased in the northernmost Barents Sea. The polar cod biomass in the Barents Sea is currently (2020) about equal to the capelin biomass, and both stocks were in 2020 dominated by age 1 fish. Thus, this situation is likely to persist for a couple of years.