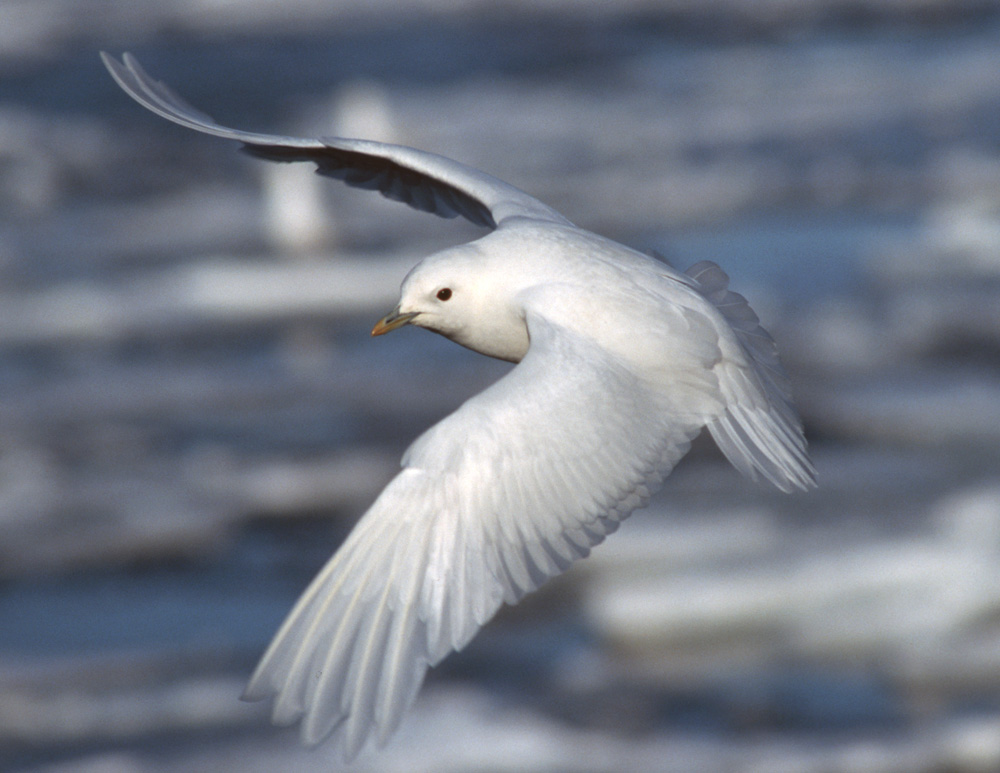 The Ivory Gull is a medium-sized gull with 108–120 cm wingspan and 450–700 g body mass. Males and females look alike and have a pure white plumage acquired during their second winter. Legs are black; eyes are dark and bill is slate blue at the base, becomes pale yellow and ends with a red tip. Immature birds have a dusky face and highly variable patterns of black spots on the body, wing coverts, tips of the primaries and tail. The Ivory Gull’s round

chest, short legs and rolling gait gives it a pigeon-like appearance when on the ground. In the air demonstrate graceful and agile flight.

The Ivory Gull has a semi-circumpolar breeding distribution confined to North Atlantic sector, with scattered colonies in the Canadian Arctic, Greenland, Svalbard and the Western Russian Arctic east to the Kara Sea islands and Severnaya Zemlya Archipelago. It has the northernmost nesting grounds among the bird species. In the Barents Sea Region, breeds in Spitsbergen, Kong Karls Land and Nordaustlandet (Svalbard) and the Franz-Josef Land. Breeding in NE Novaya Zemlya has not been confirmed during last decades. During non-breeding season spreads over the circumpolar Arctic in polar and sub-polar seas including N and E Barents Sea.

The Ivory Gull is a true seabird and characteristic high-Arctic species associated with sea ice throughout the year. They stay within ice-covered waters all over their life cycle. Southern limit of its breeding range is governed by late-summer sea ice distribution. Forages mostly at sea and primarily within the marginal sea ice zone as well as along the glacier fronts. Breeds on the remote Arctic islands. Nesting habitats include steep cliffs and nunataks in inland or coastal regions, flat ground covered with gravel or scanty tundra vegetation. Key factor affecting selection of breeding habitat is terrestrial predation, primarily by the Arctic Fox Vulpes lagopus.

The Ivor Gull is long-distant migrant with sub-latitudinal migration routes across the circumpolar Arctic seas. Satellite tracking confirms bi-directional flyways of the gulls breeding in NE Atlantic. Birds tagged in Svalbard, Franz Josef Land, and Greenland, after leaving their breeding grounds, first, in August-September, dispersed eastward from the Fram Strait to the NW Laptev Sea. Autumn migration peaks in November. Most gulls returned along the same route and reached wintering grounds in SE Greenland and the Labrador Sea in December, hence demonstrating a loop migration. Fewer birds continued eastwards and winter in the Bering Sea. Some few birds stay for winter in the Barents Sea.

In the Barents Sea Region breeds mostly in small (< 50 pairs) colonies or in single pairs, but some colonies may exceed 500 pairs. Inter-annual changes of colony location is characteristic and may be attributed to predation avoidance. Ivory Gull is long-lived seabird with low reproductive rate. Miss-breeding events and zero reproduction success are common. Lays 1–2, rare 3, eggs. Clutch size depends on ice conditions and corresponding food availability. Egg-laying is from mid-June to mid-July. Both parents incubate for about 25 days, and the young fledge at about seven weeks old.

Like other gulls, the Ivory Gull is a generalist with a diverse diet. At sea, it is a surface-feeder, foraging primarily on ice-associated small fish (such as Polar Cod Boreogadus saida) and crustaceans. It readily feed on carcasses, carrion and food remains from the Polar Bear prey. This puts the Ivory Gull on the top of the Arctic food web with a relative trophic level of 4 as calculated form stable isotopes ratio.

The ivory gull is a rare and sporadically distributed species in a global context. The world population estimate varies between 8,000 and 16,500 pairs of which up to 80% breed in the Russian Arctic. Svalbard population is probably between 1,000 and 2,000 pairs with uncertain current population trend. The total nesting population in Russia is estimated recently at 11,000–13,000 pairs with no apparent overall trend. Numbers of breeding birds in the Franz-Josef Land and Victoria Island highly fluctuate between years, and in favourable seasons may peak at 2,000–3,000 pairs. Recently, nesting is confirmed for 18 areas on 14 islands, but some of historical colonies are not occupied anymore. In long-term (over 100 years) scale the ivory gull population in N Barents Sea shows evidence of decline and/or redistribution. Biggest (some hundred pairs) historically known flat-ground colonies in Svalbard and some islands in S and W Franz-Josef Land are abandoned (i.e. Kvioya, Storoya, Cape Marry Harmsworth, Cape Germania, May Island) or used sporadically (i.e. Victoria Island), and remarkably few new colonies have been discovered.

Identified major natural threats are those related to the climate change. Being dependent on ice-associated prey, the Ivory Gull is vulnerable to changes in sea ice distribution and characteristics. Long-term decline in summer sea ice observed in the N Barents Sea affected Ivory Gull populations at the southern periphery of their nesting range, where largest flat-ground colonies disappeared since mid-last century and miss-breeding events are often observed. Sea ice conditions during prebreeding and breeding seasons may affect breeding performance. Too little or no sea ice within the reasonable foraging range in summer may lead to low reproductive success and complete breeding failure. Extensive snow cover can limit breeding sites accessibility in spring and early summer, snowstorms and rains in early chick-rearing period may account for mass chick mortality. Arctic Foxes and Glaucous Gulls Larus hyperboreus are the most important predators on eggs and chicks. Polar Bears can destroy entire breeding colonies in some years, especially when no sea ice and seals available for them. Under conditions of further climate change increased probability of catastrophic summer weather events, habitat alteration associated with glacier retreats, tundra vegetation greening, increased predation may negatively affect Ivory Gull populations in future.

Leading anthropogenic threat is global pollution. As an apex predator, the Ivory Gull is among the most contaminated Arctic seabirds. Canadian populations have highest mercury loads while Barents Sea populations – the highest concentrations of some POPs. Observed levels of p,p’-DDE and PCBs exceed threshold levels known to disrupt the reproductive success in birds. Eggshell thinning and decreased concentrations of vitamin E associated with contaminants in Ivory Gulls’ eggs are reported. Cumulative impact of contaminant burden and climate warming is considered important potential threat for the species in future. Other identified negative factors include disturbance, oiling, habitat loss and hunting.

Conservation plan needs to consider ivory gulls a genetically homogeneous, arctic-wide metapopulation effectively connected through dispersal as shown by recent genetic studies. The Circumpolar seabird group under CAFF has developed a Conservation strategy and Action plan for the Ivory Gull (2008). Principal measures include protection of key habitats, especially on breeding grounds and minimizing impacts of industrial activity on Arctic shelf areas. A need of coordinated monitoring and research to assess population size and trends, demographic parameters, as well as to study contaminants that may be causing mortality or reproductive problems in Ivory Gulls and seek ways to reduce their adverse impacts.